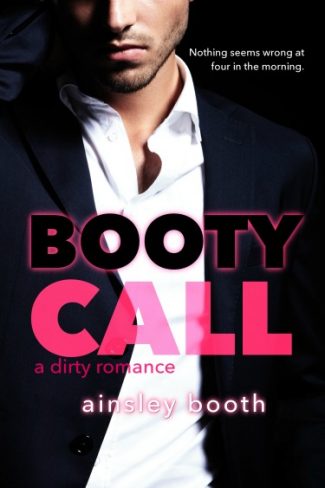 I know what I’m doing when I text Scott at four in the morning.

He knows what I’m doing, too.

That’s why he shows up twenty-three minutes later, freshly showered with a condom in his pocket and a barely dissolved breath mint on his tongue.

I smirk as he looms over me. “You are such a dirty old man.”

“We need to stop doing this.”

“Because you’re twenty and I’m not. Because I want to take you on a f***ing date and you won’t. Because we wind up yelling at each other half the time.”

“But the rest of the time you’re inside me and it feels so good, right?”

His eyes darken and I don’t need to look down to know he’s hard for me. 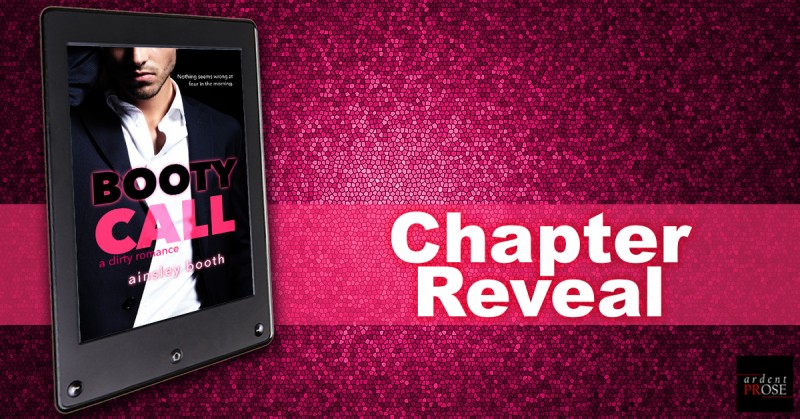 I am delighted to bring you an excerpt from Booty Call (Forbidden BodyGuards #2) by Ainsley Booth. Sit back and enjoy the hotness. 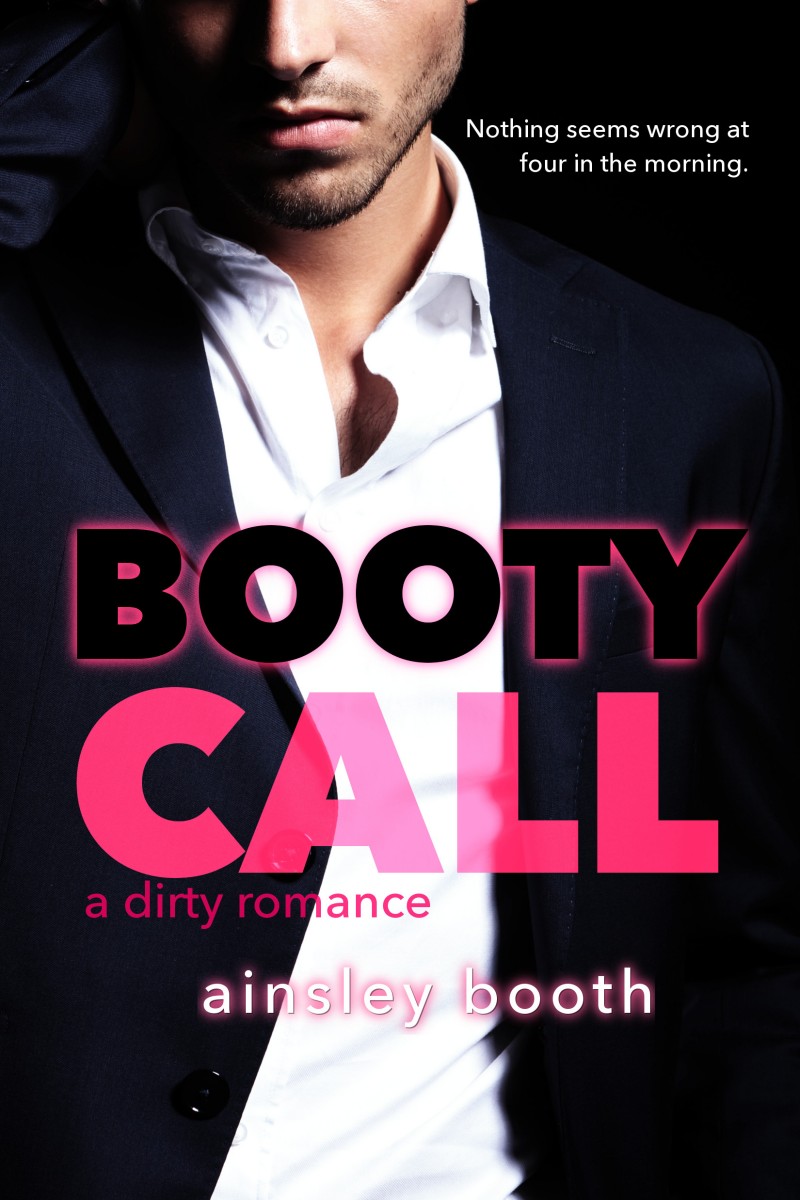 Pre-Order it now for a special price, only 99c! 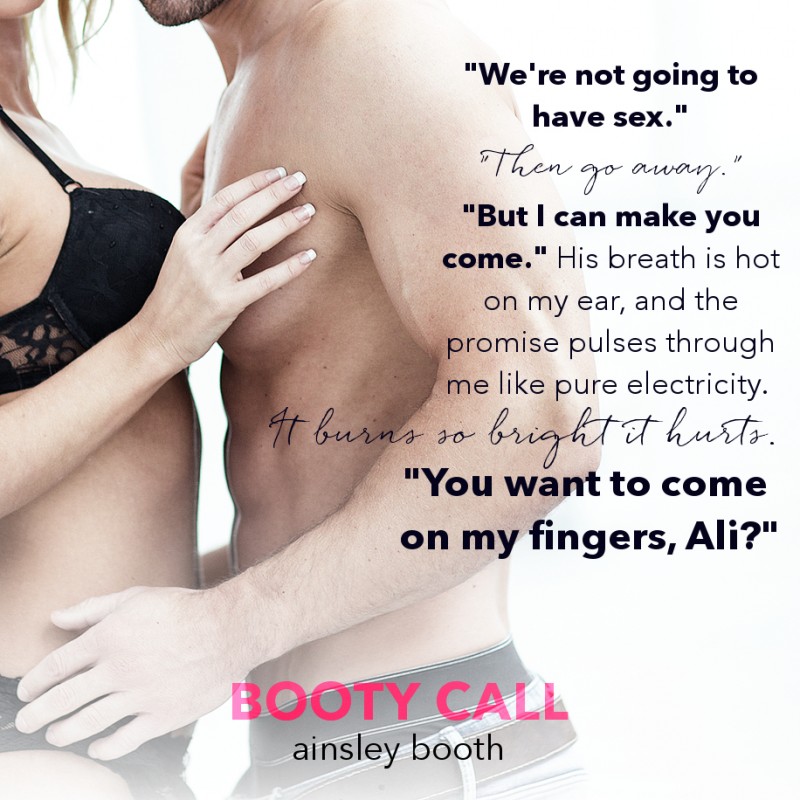 Happy birthday to me.

I’m supposed to be having an epic shop-a-thon with my sister in SoHo, but now we’re stuck at the Apple store because Hailey needs someone to fix her phone. Her fiancé Cole will have a fit if she’s off the grid.

God forbid. It’s not like she isn’t being shadowed everywhere by her bodyguard—big, brooding Scott Mayfair, of the dark, dirty looks and annoyingly consistent hands-off-Alison attitude—for our “girls weekend”. But her phone stopped working at lunch, so now Hailey’s waiting for a so-called genius to help her fix it.

I’m going to take advantage of the fact that Scott can’t leave Hailey’s side and go buy myself a present.

“I’m just heading around the corner,” I murmur to my sister. She knows where I’m going. Every time we come to the city, I visit the Mercer Street Agent Provocateur. It’s become my little ritual.

Alison Dashford Reid, all grown up and secretly wearing something naughty beneath her studious university student uniform of yoga pants and hoodies. Although that’s not what I’m wearing today—while it works for Washington…New York City, not so much. Not at the level that Hailey and I are playing at this weekend.

I’ve got my Jimmy Choo fuck-me boots zipped over my skinny Sevens, and a wool jacket over a silk camisole, because it’s February and there’s only so much cold my nipples can take in the name of fashion.

I sling the skinny strap of my purse across my body and join the flow of Saturday afternoon shoppers. New York is unlike any other city in the world, and SoHo might be my favorite neighborhood in my favorite city.  Narrow shops and cobblestone streets. It brings out the girly girl in me, and I indulge that lucky bitch with pretty underwear.

Inside, Agent Provocateur is glossy black lacquer and sparkling crystal chandeliers. A sea of silk and lace. Black ribbons and satin cups. It oozes feminine power and celebrates all things sexy.

My private collection of lingerie is one step in the direction of claiming more of that attitude for myself.

One day soon, I’m going to be this woman.

I sigh. Maybe not soon. I have to keep my head down until I’m done school and can leave Washington. Leave the toxic world of my parents behind and just be myself.

Be Alison, girl with silk panties. Girl with an easy, breezy attitude toward sex and men and life.

“Can I help you?” A smiling salesgirl approaches, and I’m glad I dressed up. I look the part of the rich socialite, and all afternoon I’ve been getting that treatment. Not normally something I care about one way or the other—and if pushed, I lean toward other. Because seriously, being rich just gives people the excuse to be depraved fucks.

And then have children, and ruin their lives with the depravity.

But on the outside, I just smile at the salesgirl. “I’m going to look around a bit. First time in a while since I’ve been in the store.”

First time since all the weird shit went down with my sister last year. Now I can’t just get on the train and come to New York for the weekend. Now when I suggest a girls’ trip, it’s a full-on thing, complete with Scott tagging along if Cole is busy.

We made that mistake once in the fall. Ugh. Totally un-fun, although it did beat a totally awkward family Thanksgiving.

This trip wasn’t my idea, even though it’s my birthday weekend. But Hailey’s got a gleam in her eye about a wedding dress, which means Cole’s finally won their non-stop battle over whether or not to get married.

Well, not that there’s a battle over getting married. Just a battle over the actual “getting hitched” moment. As in, Hailey doesn’t want a wedding. Not one our mother can ruin.

So I bet they’ll elope, which is totally fine.

After all the shit she’s been through, Hailey deserves to be happy.

And if she wants to buy a non-wedding dress for a secret wedding that she’s not telling me about just yet, I’ll suck up a totally un-fun trip to the big city.

After all, when I get bored, I can always ditch the bodyguard and sneak into a lingerie shop.

I smirk to myself—which of course is when karma decides to punish me.

Damn it. I sigh and roll my eyes to the sparkly chandelier, keeping my back to Scott. My sister’s bodyguard. My secret crush. My totally off-limits, no-fun babysitter for the weekend, apparently, since he’s followed me, and not for any fun, dirty reasons. “How did you find me? Do I have a tracking device implanted under my skin?”

Scott laughs quietly and circles around the display until I’ve got face full of cotton dress shirt and black suit jacket. Both fitted and stretched across strong shoulders.

Probably a hard set of abs, but I’ve never gotten close enough to test that theory.

I don’t look up at his face. Instead, I pretend to look at the panties on the far side of the table, right in front of his hips.

His package is pretty substantial, too. Definitely stretching the fabric there.

I blush, but I don’t duck my head further.

I’m totally fine with Scott knowing that I’m thinking about his cock.

He’s not fine with it, but that’s his problem.

He clears his throat and crosses his arms, swinging a collection of our shopping bags in front of his body to hide what I hope is a monster reaction to me. “Your sister suggested I might find you in here.”

“And you left Hailey alone to come find me?”

“Cole showed up. Turns out he had business in the city after all.”

Of course he did. Which meant that our girls’ weekend just turned into me being a third-wheel on a romantic getaway.

“Then I might head back to D.C.” I say quietly. I’m not trying to hide the fact I’m disappointed. It’s my birthday. I can be fucking disappointed if I want.

I can swear like a fucking sailor and pretend I’m not a Dean’s List, finishing-school Good Girl, because it’s my twentieth birthday and I can’t even buy lingerie without my sister’s drama intruding.

And since that drama won’t let me check him out… yeah, I’m pouting.

“You can head home. If you want.” His voice is…is…

I jerk my eyes up to his face.

Outrage surges through me, unexpectedly, at the barely contained laughter in his voice. I can feel my face turning red, twin dots of heat burning on my cheekbones. I pick up a complicated thong, with bonus straps that do nothing but torment the person looking at the wearer, probably, and I hold it up between us. “You don’t think I should do that, Scott?” I put my own mocking spin on his name. “What should I do instead? You think I should stay here in the big city, and buy these panties, maybe wear them out tonight under a little black dress? Knowing full well there’s not a chance in hell I’ll get peeled out of them at the end of the night by a hot guy? Happy birthday, Alison. Here’s to another year of bodyguard-enforced virginity.”

I’m being a whiny brat. I don’t care. It’s been months of this rock star treatment, and seriously, it’s overrated. We grew up in a wealthy family, so having private security isn’t totally out my realm of understanding, but Hailey’s relationship with one of Washington’s top crisis management guys—and getting tangled up in a human trafficking ring—has taken shit to a whole new level.

It actually doesn’t affect my everyday life. I go to school. I even have my own apartment now, having moved out of my parents’ estate at Christmas time because there’s only so much fucked-up drama one can handle and still stay on the Dean’s List.

But it does affect every “sister thing” I want to do with Hailey.

Including celebrating my birthday.

So I stare at Scott, daring him—fucking daring him—to tell me that I can do anything I want, of course I can.

He stares back, his face unreadable.

“I don’t think Cole is planning on going out for dinner with you two, if that’s your concern,” he finally says gruffly, but I’m still pissed off. Anger sizzles under my skin and now I’m just thinking shit that’s not fair and doesn’t really matter. But that’s the thing about feelings, right? Once you have them, you can’t just un-have them.

Tears prick at the back of my eyelids, and no, that is not happening. I pinch the inside of my palm with my fingers and slowly roll my eyes back to the ceiling, exhaling as I tell myself to pull it together.

Let him think I’m a haughty bitch. I don’t care.

“Miss Reid,” he starts, and I drop my gaze, staring past him as I twirl the panties on the tip of my finger.

“I’m not a child. You can call me Alison, or Ms. Reid. Or nothing at all. That would be my preference.” I swing past him and hold out the lace and ribbon scrap of nothing to the sales girl. “I’ll take these with a matching 32C bra, please.”

I shake my head when she asks if I’ll need to try anything on.

While the thought of making Scott sit outside a change room would usually make me achy and wet, right now I’m not in the mood to play the tease. Not when it’s not going to get me anywhere.

I’m not a child. I told him that. I told my parents the same thing when I moved into my own apartment.

One of these days, I’m going to start believing it for myself.

And until then, I’ll fake it.

I’ve been doing that my entire life. I’m a pro.

After I pay for my purchases, I head for the door. Scott stands back, letting me move past him, but even though he hasn’t said anything, I still feel unsettled. Like maybe I haven’t had the last word.

He doesn’t get to do that to me.

I am not a child. I won’t be handled.

I stop and meet his gaze head-on. “Call the restaurant and change our reservation. Cole can join us. And you can, too.”

“I’m fine at the bar…Ms. Reid.” His jaw clenches, but that’s the only reaction.

“I understand that.” I lift my bag and wave it in the air. “But since my future brother-in-law won’t let me wear this for anyone else, tonight I’m wearing these for you. Whether you like it or not.” 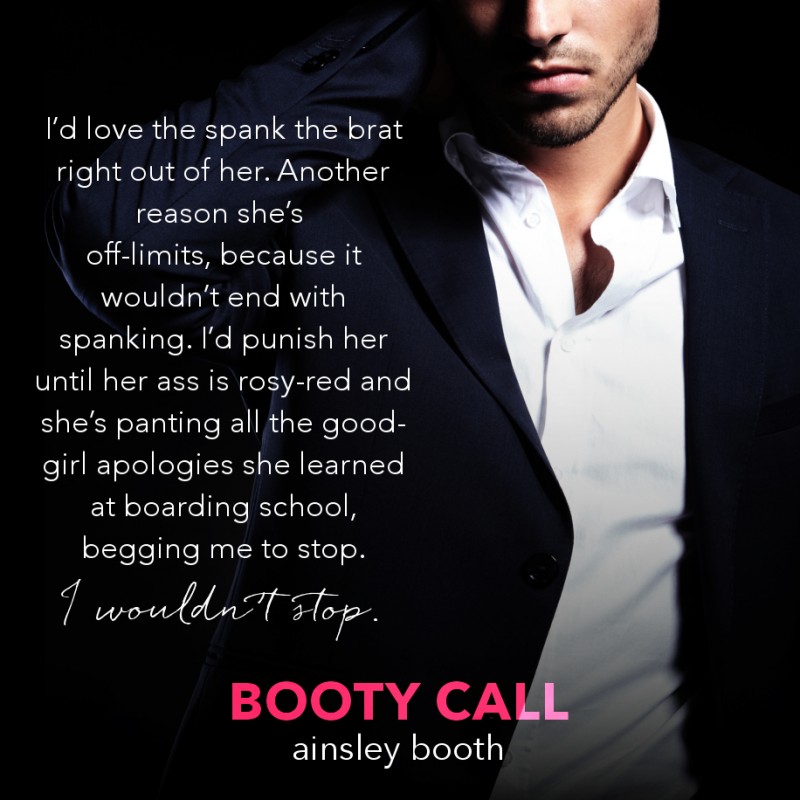 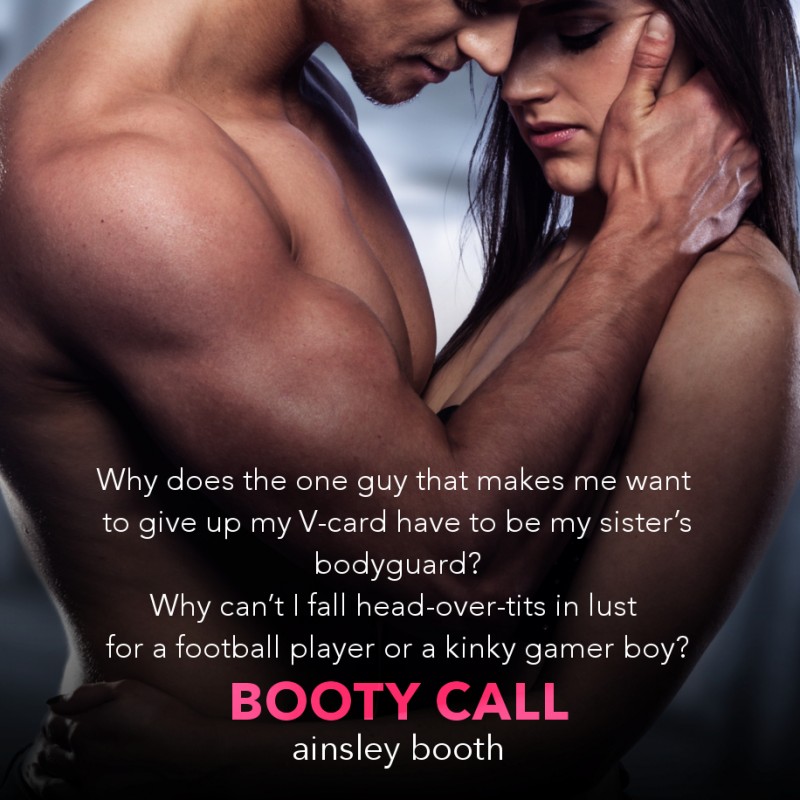