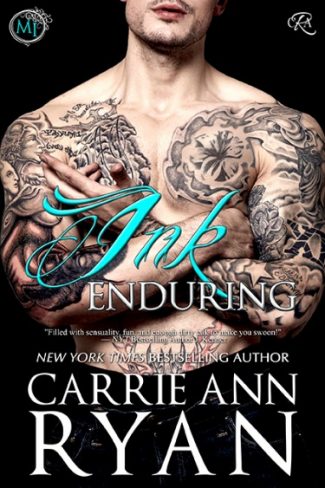 The Montgomery Ink series continues with a forbidden love between three friends and a past that they can’t escape.

Jake Gallagher knew from the moment he saw Maya that she was the one for him—it had the same breath-taking intensity as when he’d first set eyes on Border. Only life never turns out the way one plans, and now he’s falling for someone else...or at least he thinks he is.

Maya Montgomery never should have looked past the friendship she already had. Now that she has, she can’t stop thinking about Jake and what he means to her. When a mysterious stranger from Jake’s past shows up at their door, she’s forced to admit that if she doesn’t take the risk of a lifetime, she’ll regret it for the rest of her days.

Border Gentry walked away without a second glance once because of what could happen if he let go, but now he’s back and ready to see what he’s missed. He’s been on the road a long time and has seen things no man should ever see, yet once he rediscovers the broody Jake and meets the inked and fierce Maya, they’re like a balm to his soul and he realizes what path his future should take.

It will take more than sizzling chemistry and a heat that never dies for the three of them to overcome their pasts. And when someone from the outside wants to stand in their way, it’s not only their hearts on the line…but also their lives. 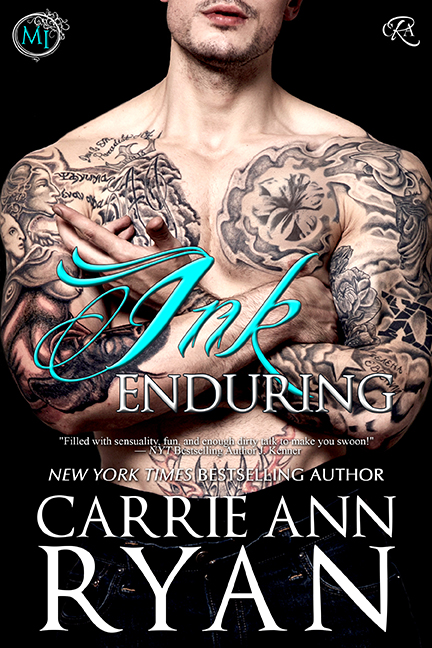 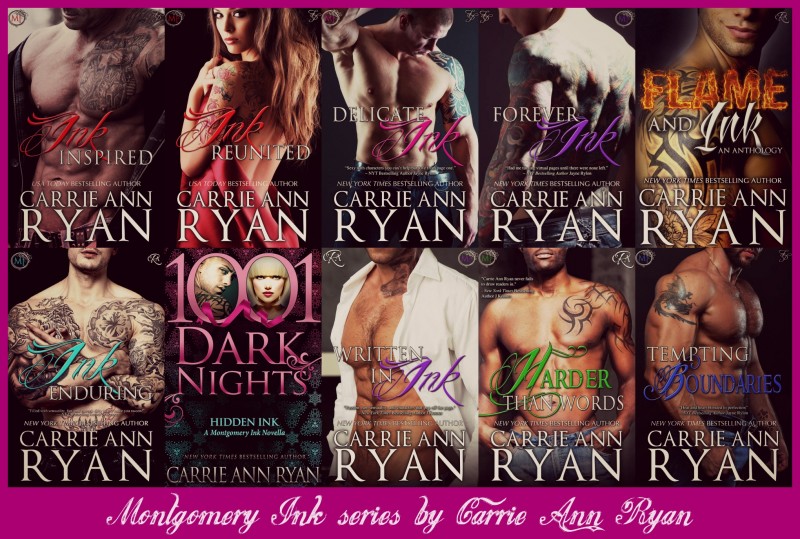 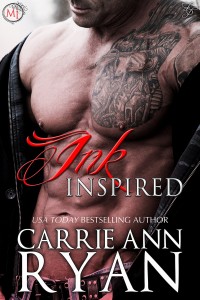 Shepard Montgomery loves the feel of a needle in his hands, the ink that he lays on another, and the thrill he gets when his art is finished, appreciated, and loved. At least that’s the way it used to be. Now he’s struggling to figure out why he’s a tattoo artist at all as he wades through the college frat boys and tourists who just want a thrill, not a permanent reminder of their trip. Once he sees the Ice Princess walk through Midnight Ink’s doors though, he knows he might just have found the inspiration he needs.

Shea Little has spent her life listening to her family’s desires. She went to the best schools, participated in the most proper of social events, and almost married the man her family wanted for her. When she ran from that and found a job she actually likes, she thought she’d rebelled enough. Now though, she wants one more thing—only Shepard stands in the way. She’ll not only have to let him learn more about her in order to get inked, but find out what it means to be truly free. 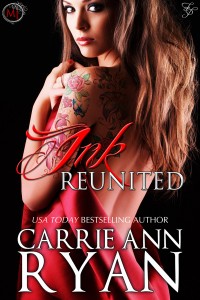 From the streets of New Orleans and the heat of Midnight Ink, comes the happy ever after for a character whose story was begged to be told.

Sassy Bordeaux is the Midnight Ink receptionist, honorary godmother, best friend to many, and matchmaker expert. In the past two months, she’s watched eight couples fall in love, make mistakes, and find their happy endings. Though she might have had hand in each of those, she’s yet to find the peace she’s desired. When the men from her past come into Midnight Ink, she’s forced to face what she left behind and what could happen if she lets go of her pain and finds a future she deserves.

Rafe Chavez and Ian Steele remember their time with Sassy like it was yesterday, yet have worked hard to move on. Or at least try to. Now they’re both back in New Orleans for the woman they loved and for the connection they shared with each other. It will take more than the usual groveling, pleading and begging for these three to overcome their history, but once they take that step, the streets of New Orleans will never be the same. 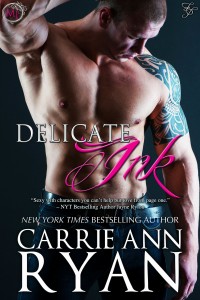 On the wrong side of thirty, Austin Montgomery is ready to settle down. Unfortunately, his inked sleeves and scruffy beard isn’t the suave business appearance some women crave. Only finding a woman who can deal with his job, as a tattoo artist and owner of Montgomery Ink, his seven meddling siblings, and his own gruff attitude won’t be easy.

Finding a man is the last thing on Sierra Elder’s mind. A recent transplant to Denver, her focus is on opening her own boutique. Wanting to cover up scars that run deeper than her flesh, she finds in Austin a man that truly gets to her—in more ways than one.

Although wary, they embark on a slow, tempestuous burn of a relationship. When blasts from both their pasts intrude on their present, however, it will take more than a promise of what could be to keep them together. 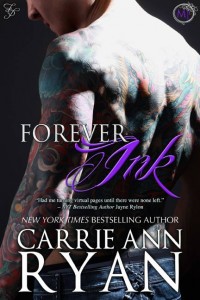 Callie Masters loves ink. After finally getting her own chair in Montgomery Ink, she’s ready to start being a full time artist, rather than only an apprentice. When Austin, her former boss, gives her one very broody man as her first client, she jumps at the chance to make him hers—in and out of the shop.

Morgan McAllister is old money, old connections, and recently has been feeling just old. When he goes in to get his full back piece done after years of putting it off, the bright-eyed woman with the sly smile catches his eye. Between her age, attitude, and views on life, he knows she’s all wrong for him, but that doesn’t mean she’ll keep out of his thoughts.

When life throws them together after a few close calls, Morgan and Callie will have to trust in themselves and what their relationship will mean. Between conniving family members, blondes with too much time on their hands, and their own misgivings, trust in the bedroom and out of it won’t come easy. 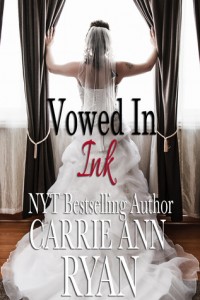 It’s a very important day for Sassy, Rafe, and Ian. The three are ready to form their union in body and soul as well as legally for one of the pairs. Only when the day comes, not everything turns out how they’ve planned. The triad will have to look deep into their hearts and remember why they fought for each other not once, but twice in their lives so they can find their true happy ending. 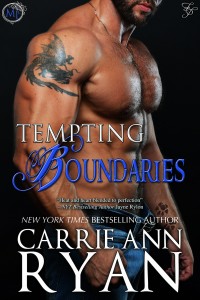 Decker Kendrick knows it’s wrong to have feelings for his best friend’s little sister, but that doesn’t stop his thoughts from going down that path. No matter how hard he’s tried to stay away from Miranda, once she gets her sights on him, there’s no backing down.

Miranda Montgomery might be the youngest of the Montgomery clan, but that doesn’t mean she doesn’t know what she wants. Namely—Decker. She’s loved him for as long as she can remember and won’t walk away until she gives it her all.

But once they give in, not all is at it seems. Decker’s father’s out of jail and someone from Miranda’s past isn’t happy with the new relationship. Even as they start to move on and overcome their pain, they’ll find that their inner obstacles are the ones they’ll have to face first. 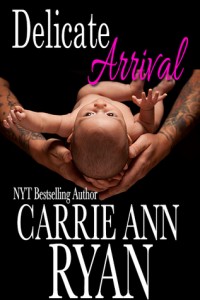 A look into the lives of Austin and Sierra as they welcome their baby to the world. They’ve been through hell together and now have one more trial to pass before they can keep going. 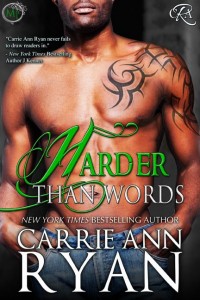 Meghan Montgomery-Warren thought she knew what love was when she’d married young and had two children. After years of being emotionally beaten down, her husband has finally left her and now she’s forced to find her way once again. Somehow she needs to find the person she used to be and figure that the strength she’d thought she’d lost was always there.

Luc Dodd left Denver and his best friend Meghan when he was forced to watch her walk down the aisle with another man. He might have only been her best friend, but he held his true emotions close to the vest. Now he’s back in town and in Meghan’s life. Only he needs to decide if that’s enough for him…and her.

Their journey from friends to lovers is a slow burn of seduction and pain. When Meghan’s past comes back to haunt them both, the two of them will have to stand closer together or be torn apart by their own misgivings forever. 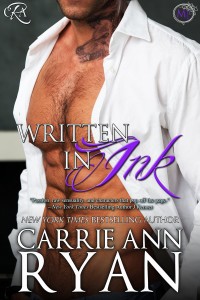 There’s nothing worse for a writer than missing a deadline. For Griffin Montgomery, his failure to do what he loves comes at a blow. He didn’t understand how it was affecting his life until his well-meaning family intercedes. His sisters have hired him a new personal assistant and he’s outraged—that is, until he sees who it is.

Autumn Minor is light on her feet and a bare memory for most people she meets. She does her best to blend in everywhere she lives, even if it’s only for a short period of time. Making sure no one truly notices her is the only way she’s survived this long. Only when she meets Griffin and the rest of the Montgomerys, she’s afraid she won’t be able to let go when its time to run.

Though the two begin a tentative but explosive relationship, they know it can’t last forever. Neither of them are made for the long haul when it comes to love and romance. When the demons from Autumn’s past find her and put both their lives at risk, Griffin will stop at nothing to protect her. In the end, though, he’ll be the one who needs a second chance. 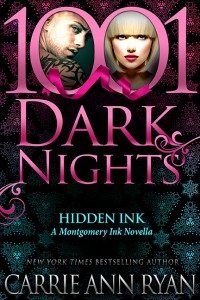 The Montgomery Ink series continues with the long-awaited romance between the café owner next door and the tattoo artist who’s loved her from afar.

Hailey Monroe knows the world isn’t always fair, but she’s picked herself up from the ashes once before and if she needs to, she’ll do it again. It’s been years since she first spotted the tattoo artist with a scowl that made her heart skip a beat, but now she’s finally gained the courage to approach him. Only it won’t be about what their future could bring, but how to finish healing the scars from her past.

Sloane Gordon lived through the worst kinds of hell yet the temptation next door sends him to another level. He’s kept his distance because he knows what kind of man he is versus what kind of man Hailey needs. When she comes to him with a proposition that sends his mind whirling and his soul shattering, he’ll do everything in his power to protect the woman he cares for and the secrets he’s been forced to keep.