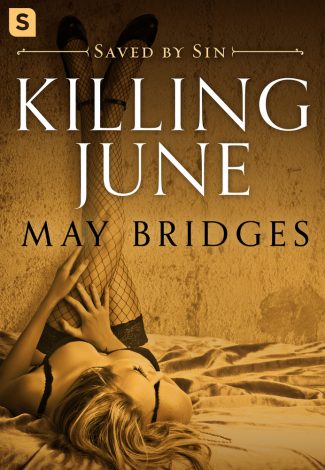 SEDUCED BY PAIN
At night I’m June, dominating with the whip, even as I crave the hot, searing blow of the cane, myself. I loathe this side of who I am, but I can’t deny it or escape it. And as my clients cry out for me, begging for mercy, I can't help but want June dead.

By day, I’m Alex Ryan, the good, successful Southern woman everyone thinks I am. I’ve compartmentalized my life to make it bearable, and to get what I want most: revenge. I can have a future with June dead, as soon as I confront the man that terrorized my past.

SAVED BY SIN
Cade Brannon is the local gun for hire, part of the seedy underworld of Dallas, but he may also be my savior. I want his help and he wants me. But Cade refuses to play by my rules and is forcing his way into every one of those compartments that I want to lock away. Now the parts of my life I’ve fought so hard to keep separate are bleeding together and it’s tearing me apart.

I just want to go back to being Alex Ryan. But at what cost am I willing to kill June? 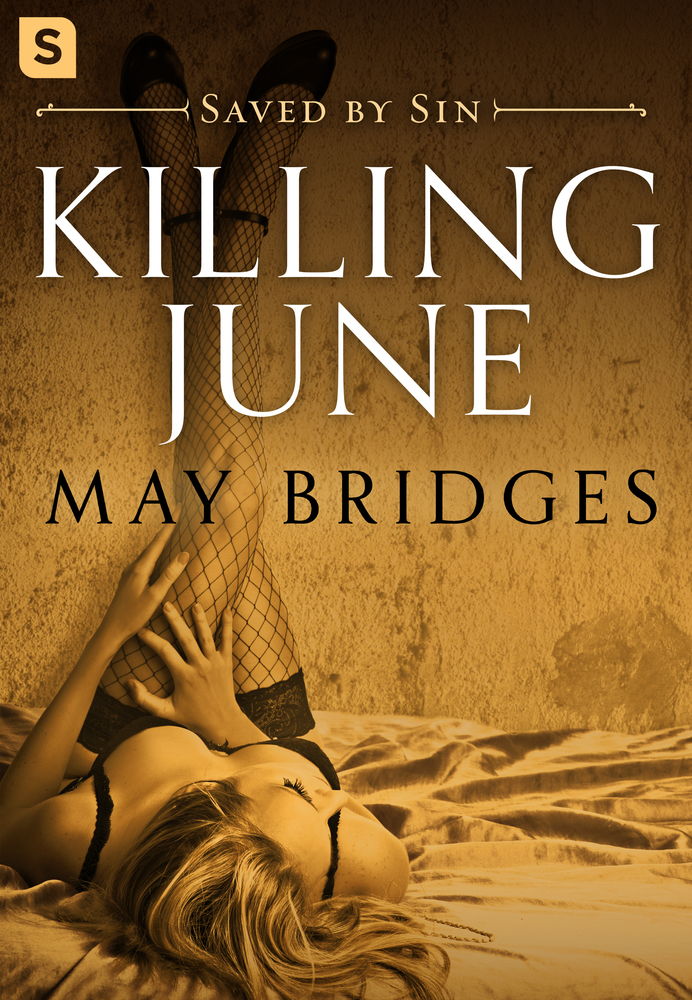 I’d thought about killing June before, but never with the determination I felt while sitting in Joe’s bar waiting to meet new clients. I hated her—who she was, the things she did, and mostly, that I needed her. I hated the tension tightening my gut, and the nausea I fought waiting for a stranger to slide onto the stool beside me.

I glanced around, trying to spot my would-be client. Nothing but bikers and half-dressed, strung-out women. It would’ve been a rough crowd in my neighborhood, but that far south of I-20 in Dallas, it was spot on.

My nerves, coupled with sticky Texas heat, pushed my discomfort over the edge. It was September, ten p.m., and a solid eighty-five degrees in Dallas. Ninety-five degrees easy in Joe’s smoke-filled sweatbox.

“You’re nursing that one, Doll.” Joe pointed to my half-full glass. He pulled a bar towel across his damp, dark brow.

“Here for a quick chat with a friend, then I have to drive. Being responsible, Joe.”

“Sure ya are.” Joe winked and strolled across the bar to help a string of spandex and leather–clad ladies.

We’d never discussed it, but I was sure the old man knew that the guys I met weren’t friends, and that I wasn’t hanging out to chat.

Letting ice from my drink linger against my lips, fizz tickling my nose, I watched Joe pour tequila and pass out salt. My view was obstructed by the mass of a man who settled on the stool beside me.

This was the awkward part.

My eyes raked over the man and my throat ran dry, thinking of having him as a client. An image of him cuffed and on his knees flooded my vision. My clients came in all shapes and sizes, but they were usually refined and polished. His frame was well-used muscle wrapped in a black tee. His naturally tanned arms were covered in black ink. There was confidence in his movements, an air about him that dared you to question anything he did. Dark eyes and a stubbled jaw gave him a beautifully rough appeal. It made my own confidence sway.

I always sat on the stool at the end. My associate, Robert, set the meetings up, gave them my description, and told them to sit next to me. So the man making my insides flip was either my client, or he had taken my client’s seat at a most inconvenient time. I’ll admit, I was hoping for the latter. Robert assured me he wouldn’t send men my way that I couldn’t handle. The guy next to me looked like a lot to handle. More than I was used to.

I gave a thought to the makeup that was melting off my face and considered going to the bathroom to fix it before saying anything to him. It wouldn’t have mattered. When I first started meeting clients, I fussed over every detail. I worried they’d be disappointed by some trivial aspect of my hair, makeup, whatever. Now, I knew better. I either was or wasn’t what they wanted, and running mascara wouldn’t change it.

I threw back the rest of my drink for courage and then swiveled on my wood stool, letting the toe of my shoe linger against his jeaned leg innocently.

“You don’t look like you belong in here,” the man said. He talked without turning my way, but I knew he meant me.

I didn’t look like I belonged. I’d come straight from work; there hadn’t been time to change into something that blended better with the babes and bikers. My knee-length pencil skirt, satin blouse, and Prada pumps would have to do.

“You look like you fit quite well,” I replied, casually wiping condensation from my glass. It beaded off my finger and dropped onto the warped wooden bar top.

Jeans, black T-shirt, tattoo-covered arms, and a muscle mass that made the bouncer look scrawny—he had drug dealer written all over him. Not your low-end corner man, but the thug that breaks the guy’s neck when he does more of the blow than he sells, and the profits don’t add up.

“Hey, Doll,” Joe said, resting his brown liver-spotted forearms on the bar in front of me.

“Glass is empty. Sure you don’t want another?”

“She’ll have one more, and I’ll take a water,” my possible client said, cutting me off.

“Sure thing, Cade.” Joe dipped his head and moved to comply with the stranger, Cade’s, request.

“I didn’t peg you for a water guy,” I said. I didn’t like men ordering for me, or assuming I wanted to have a drink with them. It was presumptuous. Still, I didn’t know if he was my client, so I played nice.

“You don’t strike me as a Jack & Coke girl, Doll, but here we are, both underestimating the other.”

The deep tone in his voice was admittedly delicious. It was a voice that made you want to let your eyes flutter closed so you could concentrate on absorbing it. Maybe it wouldn’t be so bad having a few clients like him thrown my way.

He turned his face toward me with a half-cocked grin, his dark hair falling forward on his head.

“Doll isn’t my name. Joe gets away with it because he’s charming, in an old guy sorta way. If we’re going to have any kind of arrangement, you don’t get to call me that again. We clear?” I looked him in the eye, my gaze unwavering.

Men knew what they came to me for, the potent mixture of pain and pleasure only some women are cut out to provide. Still, it was good to establish who would be in control during our interactions. I could tell it was best to get that point straight with this one right away.

Cade turned to face me head on. His heels rested against the bottom bar of his stool, knees bent, one on either side of my crossed legs, closing me in. My field of vision was reduced to the man before me—his dark hair and velvet brown eyes, the wide expanse of his shoulders, the rise and fall of his chest. From his easy posture, thick corded body, knowing smile, and focused stare, I could tell he was dominance personified. It was atypical of the men that came to me. Dominance was what they came for, not what they brought. To not be intimidated by that man would be a foolish thing for anyone. I tried not to let him see that.

“Arrangement?” he said, his eyes lighting up with amusement. “I don’t pay for pussy, and you don’t want the kind of arrangements I make with people. I think that’s the guy you’re looking for.” Cade nodded toward a man who looked as out of place as I did. He wore a tailored suit and hovered awkwardly a few steps away. He was unmistakably my client, the kind I usually saw. He knew he was supposed to sit down next to me, but didn’t seem to like the prospect of approaching Cade for his seat. I couldn’t blame him.

“I don’t sell pussy,” I said, snapping back at him.

Cade’s smug grin brought my shame and rage bubbling to the surface. I could feel my cheeks reddening. It reignited my urge to kill June, sooner rather than later. That part of my life was ugly. I spent nights with men I didn’t know, dominated them, and set them free. I didn’t fuck them. Yes, that line was thin, but it was the only action standing between something I could live with, and being a whore. 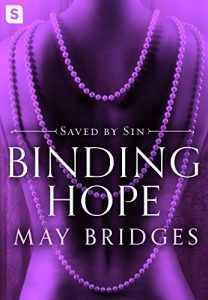 The next sexy and thrilling book in the Saved by Sin series! 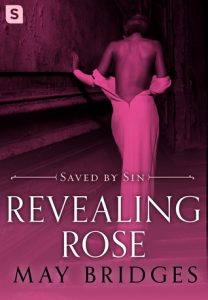 Final installment in the thrilling and exciting trilogy Saved by Sin!

May Bridges is a misplaced Southerner. Having spent a decade on the West Coast, she still tries to order grits at every breakfast restaurant and is on a personal mission to spread the popularity of fried okra. Rainy days in Oregon are spent inside writing dark, gritty romance, or drawing and covered in charcoal. Sunny days are almost always spent on the softball field or fishing. And truth be told, you can probably find her on a softball field on rainy days too. It’s the best excuse to play in the mud.