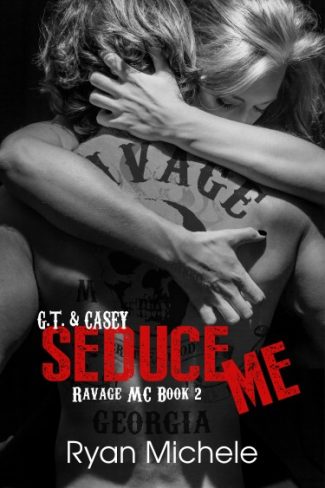 Casey Alexander grew up part of the Ravage Motorcycle family since the day she was abandoned by her mother and thrown into her father’s lap. Always seeing herself as an outsider, she spent her whole life trying to fit in, but never really succeeding. When she loses her beloved father, the utter aloneness engulfs her, leaving her searching for solace in the one man she’s always craved. Confessing her love for him only results in devastation when he pushes her away. Convinced she needs a fresh start, she leaves everything behind in order to mend her broken heart and begin building a future without him. Gage Thomas (G.T.) Gavelson fell in love with his Angel when he was just a pint sized kid. Both beautiful and smart, he always felt she deserved so much better than him. Growing up beside her in the club only continued to test his will power, until one night, he gave into temptation. Realizing he couldn’t allow himself to hold her back from the life she deserved, he pushed her away, allowing her to believe she would never be enough for him. Letting her go had been the hardest thing he’d ever done. Even though he’d thought it’d been the right thing to do, not a day goes by that misery doesn’t consume him for it.When a tragic shootout occurs, everything changes as once again their lives are intermingled. When you find your way back to the one person you are meant to be with, forgiveness should be easy. But sometimes, we hurt each other too much to ever be able to forgive.Is their love strong enough to heal their pain?