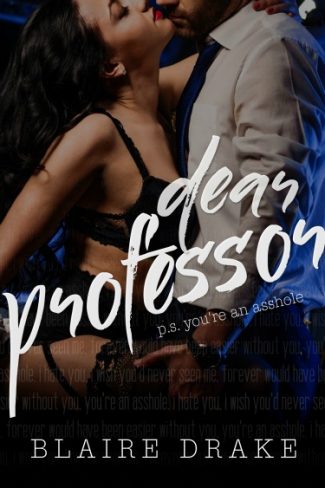 Does it bother you that you’re ten years older than me?

Have you ever thought it’s wrong that you watched me fuck another guy on camera for months?

What do you want from me, really? All I wanted was my letter of recommendation, but now I’m stuck, aren’t I? Stuck under your thumb… And your body.

From cam girl to personal whore, and all by the age of twenty-one. You’ve got me good, haven’t you?

But guess what? I can play too. Grab the polish, because I’ve found your skeleton, and it's time to dust.

I’ll see you in class.

Oh and, Sir? I’m not wearing any panties. 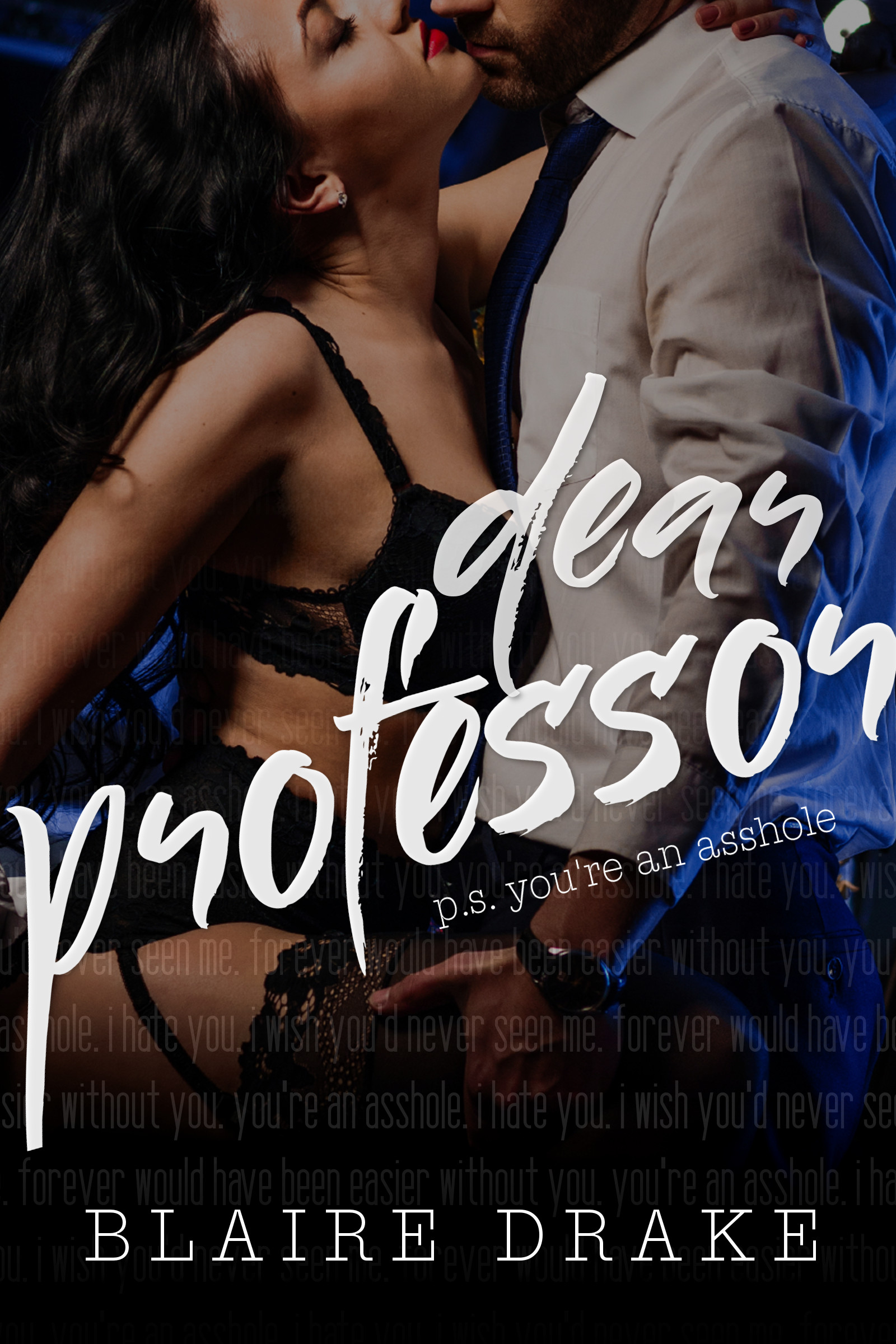 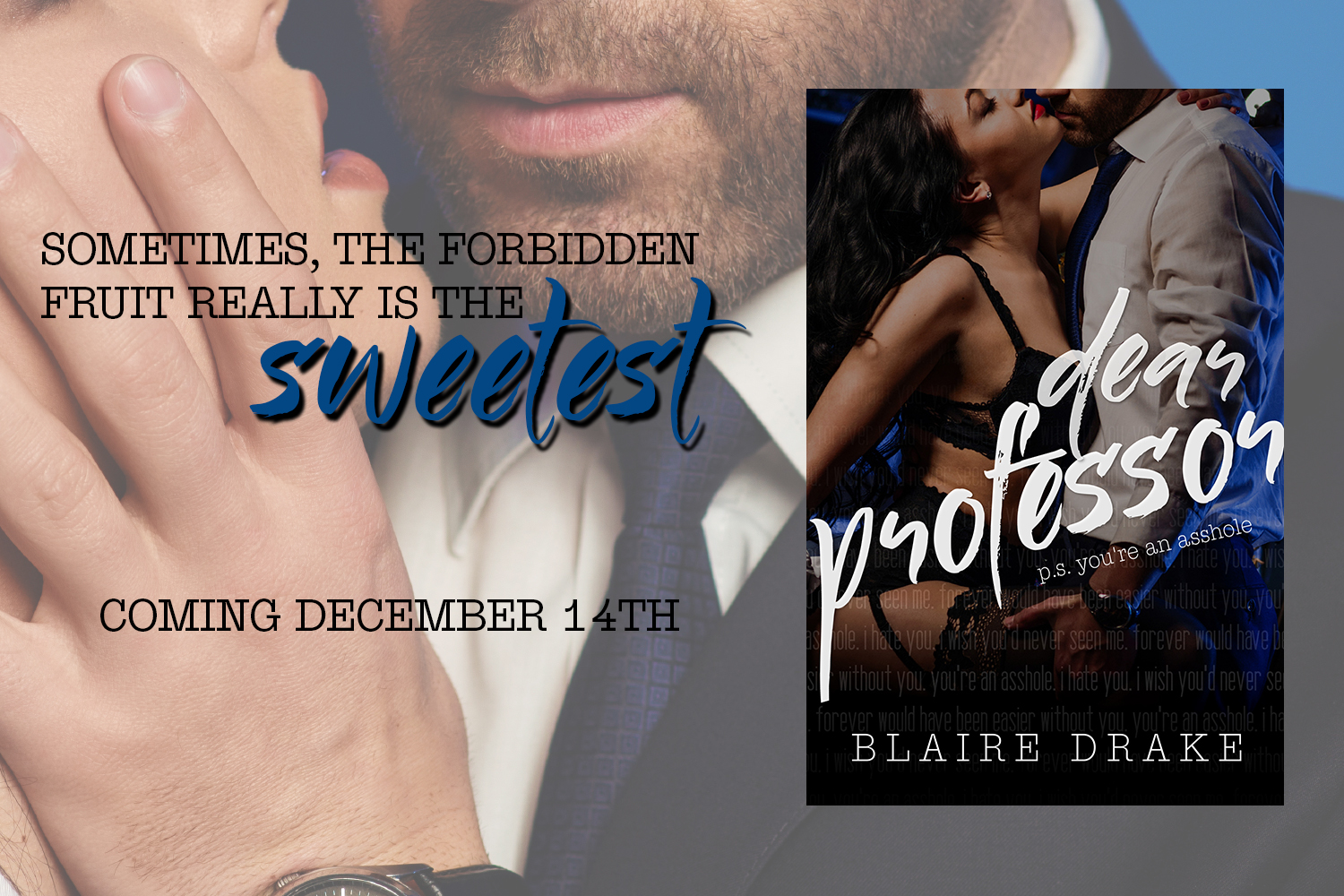 His electric blue eyes focused on me, and in the bright hue of his gaze, the rest of his office seemed to melt away. I had no idea how he kept doing that to me—it was almost as if he were casting a spell over me, hypnotizing me with nothing more than a glance.

My heart thumped loudly in my chest at the lust I saw burning back at me. That hard-edged, animalistic lust that secretly drove me wild. I’d never tell him that. I was certain of it. I’d never give him that much power over me.

He already had enough.

“What’s wrong, sir?” I asked as I coyly twirled a piece of my hair around my finger.

“You’re starting to piss me off, Darcy,” he shot at me. The rough edge to his voice rumbled through the air between us until it hit me full-force. His words crawled over my skin, and each one carried the whispered promise. Or maybe it was a threat; I couldn’t tell.

“How can I piss you off? I haven’t done anything.” It was a petulant response, I knew that, but I didn’t care.

He pushed up out of his chair and stalked around his desk. I inhaled sharply, but he swept right past me and toward his door. Just when I thought he might pull it open and send me on my way, he turned the lock.

The click echoed through the air, and it did nothing for the butterflies that were rapidly fluttering in my stomach.

I hated him. It was getting clearer and clearer to me every day. I despised Professor Jordan Keaton, but I also craved him as badly as I needed my next breath.

“Now, let’s try this again,” he said, his voice deathly low. It scared me and thrilled me all at the same time. “Have a little think, Darcy. Imagine why I might possibly be pissed off with you.”

I dropped the lock of hair I was twirling and looked at his pants. The bulge gave his attraction to me away. “I’m standing in front of you as opposed to being on my knees with your cock in my mouth?”

He jerked his head around, piercing me with those eyes. “Keep running your mouth, sweet thing. I dare you.”

“Or what? Really, what are you going to do to me in your office, Professor? Give me lines? Make me write an essay on why young ladies should be seen and not heard?”

His jaw ticked, his lips tightening, and he moved toward me so quickly I took a step backward. It was useless, though, like I knew it would be. The grip he had on my wrist was so certain, the tug toward him so strong, that I couldn’t fight him.

My body slammed into his, and no sooner had the air rushed from my body than he pulled the skirt of my dress up. Cold air flitted across my bare backside, but it was replaced almost instantly with one sharp smack.

My pussy clenched, and I bit the inside of my cheek to stop myself whimpering. In pain or pleasure—I had no clue.

“That,” he growled into my ear. “That is what I’ll do if you keep sassing me, Miss Hamilton.”

I wondered if he knew how strongly I was considering continuing to sass him just for that purpose. I would do that later—I needed to know what had got him so riled. “Understood,” I said in a softer tone. “What did I do?”

He let go of my dress and slid his hand up my back. His breath was hot against my skin as he sunk his fingers into my hair and turned me around so my back was to him. “Last night,” he replied, his lips close to my ear. “Your little show.”

“You’re not my boss, Jordan. Neither are you my fucking keeper.”

His grip grew tighter, so much so that my head tilted back. “Darcy. Did. You. Fucking. Ask. Me?”

“No,” I ground out, my jaw clamped tightly.

“Did you think I wouldn’t find out? Did you really fucking think I wouldn’t know that you were spending your night in front of your camera, with your finger rubbing that little clit of yours?” Roughly, he pushed his hand beneath my dress and teased his fingertips along the line of my panties. “Did you think you’d be able to walk into my classroom today and I wouldn’t know that at least one or two of those students hadn’t watched you as you fucked your own fingers?”

“No,” I breathed out, my lips parting as his hand dipped beneath my panties. The tip of one of his fingers ghosted across my clit, and it sent a bolt of pleasure through me.

“I didn’t hear you,” he rasped in my ear, flicking his finger across my clit.

“No,” I repeat, this time more forcefully. “I knew you would. And I didn’t give a shit.” I gasped as he pushed down hard on the sensitive spot.

“We made a deal,” he reminded me, his tone tight with anger… And thick with desire.

“Damn straight I won’t.” He pulled his hand from between my legs but kept me in place with his grip on my hair. “Now are you going to renege on it again or are you going to behave yourself?”

“From the man who just had his fingers on a student’s clit?”

I reached behind me, between us, and cupped his long, hard cock with my hand. The zipper of his pants pushed into my palm, and I traced my thumb down the side of his erection. “I’m not the only thing pushing, am I?”

“Fuck.” He hissed the word out, and the next thing I knew, my dress was being lifted up, and he let go of my hair.

My hands slammed against his desk as he bent me forward and moved my panties to the side. He’d barely touched me, but I could feel my pussy throbbing in anticipation of what was to come.

I knew this would be a cold, hard fuck, designed to remind me who I belonged to. Who, for all intents and purposes, owned my body.

It would be a reminder and a punishment, all because I dared to take control of myself for one night and defy him.

Jordan’s movements were as smooth as always, and he spread one of my ass cheeks with a strong hand. His fingertips dug in almost painfully, but I didn’t care, because I sighed in relief as he pushed his hard, thick cock inside me.

“Now, this is how this is gonna work,” he rasped into my ear as he grasped my hair and tugged. “Since you’ve forgotten, Darcy, you need a reminder, don’t you?”

I didn’t dare answer. The question was rhetorical. Besides, I was already practically panting from his swift invasion of my body.

I swallowed and glanced at the shadows of people walking past his office door, a tiny lock and frosted glass providing us limited privacy. I’d known it was coming, sure, but now we were here, silent, and I could hear the people outside…

I couldn’t deny the excitement that swept through my body at the thought we could be interrupted any second. That someone could walk right up to this door and probably see the vague silhouette of him fucking me from behind.

I felt dirty, but I liked it.

“And you got it, Darcy.” He pulled out and slammed right back into me, making me bite down on my lower lip. “I’m gonna fuck you, and you’re not gonna make a sound. Understand?”

I didn’t answer for fear that I’d whimper instead of respond yes. I just nodded and sucked my lower lip into my mouth.

“Good girl.” The words were but a whisper, but they were two I was becoming rapidly acquainted with.

And worse? I liked it when he said it.

He was reminding me of more than he knew… Like what it meant to fuck because lust was just too strong.

He pulled out of me slowly. With the head of his cock resting at the opening to my pussy, he gripped my ass tightly. “Who do you belong to, Darcy?”

The sting didn’t surprise me when it came.

He gently caressed the spot he just slapped. “And who owns your body, Darcy?” I arched my back as his cock entered me fully. “Who does this tight, wet pussy belong to? Who decides who and what gets to be inside it?”

“You.” There was no other option.

“That’s right. You and your wet pussy are mine. I own you, sweet thing. Every single fucking inch of your gorgeous body is mine.”

“Now.” He stilled, his hand still resting on my ass, and slowly let go of my hair. The raven curls tumbled over my shoulder and onto the desk, and I felt the loss of him before it happened.

He eased out of me, and ever the gentleman, slipped my panties back over me. Great. Now I’d be walking around all day wanting to screw anyone reasonably good looking.

I pushed myself to standing as soon as I heard him take a step to the side. I looked at him just in time to see him zipping his pants back up and tucking his shirt in. His tie hung a little lopsided, and I raised my eyes from his neck.

Our gazes collided with heart-thumping ferocity. The slow, sexy curve of his lips to one side did nothing to calm the quick two-step beat my heart had just taken up, but I didn’t dare to look away. Even if I did, I don’t think I could have. His eyes were the net, and I was nothing but a tiny fish, tangled up in him.

“What for?” I questioned as he walked toward the door without moving his eyes from mine.

He unlocked the door, and the smirk he shot me was dirty. I sighed and grabbed my purse from the chair, then walked toward him. I reached for the handle at the same time he grabbed my chin.

His mouth touched mine, searing onto my lips with its fierceness.

He pulled away as briskly as he kissed me, but that still didn’t stop me from touching my thumb to my lower lip.

“Remember,” he murmured, opening the door. “Seven. Don’t be late.” 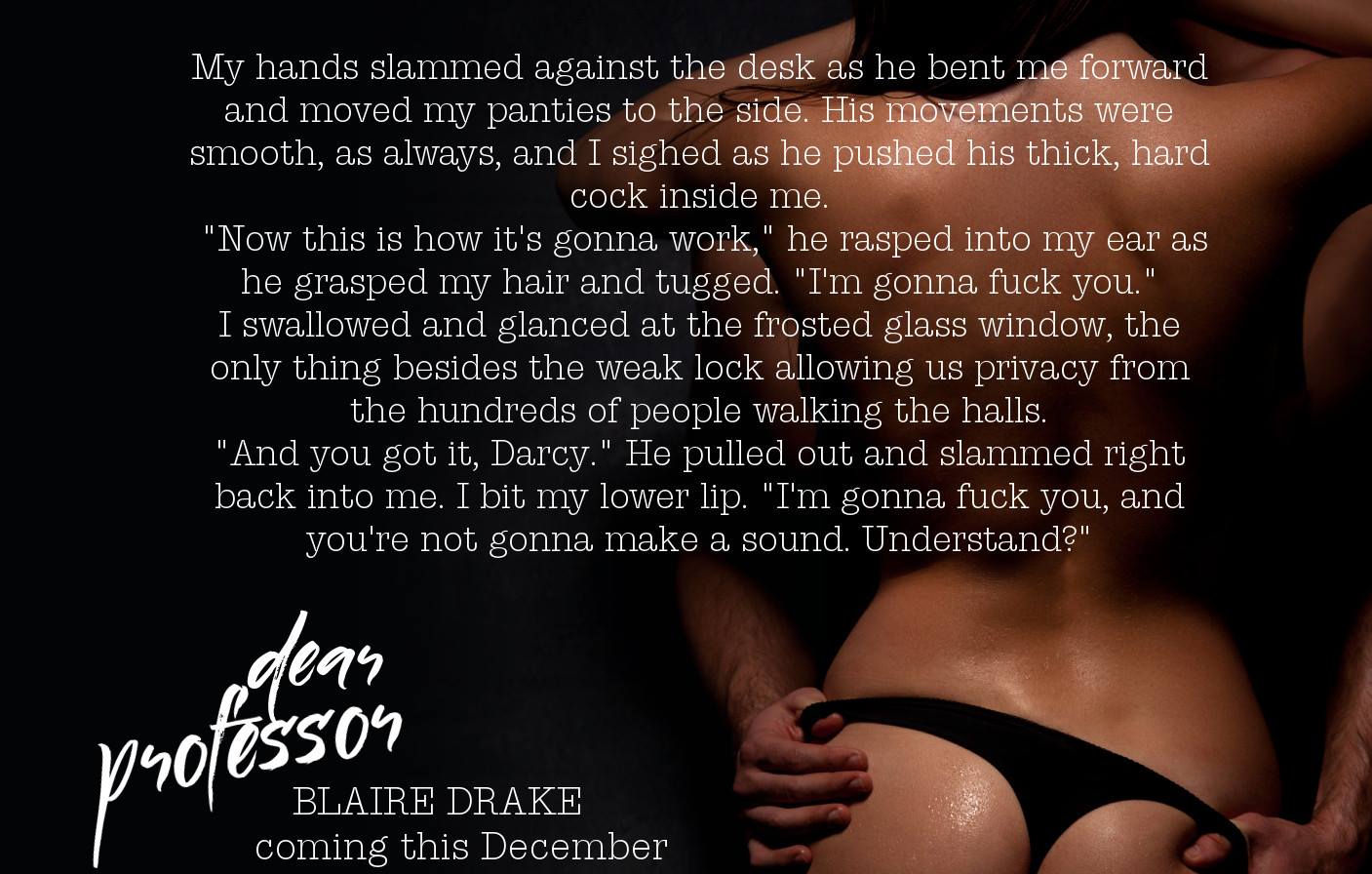 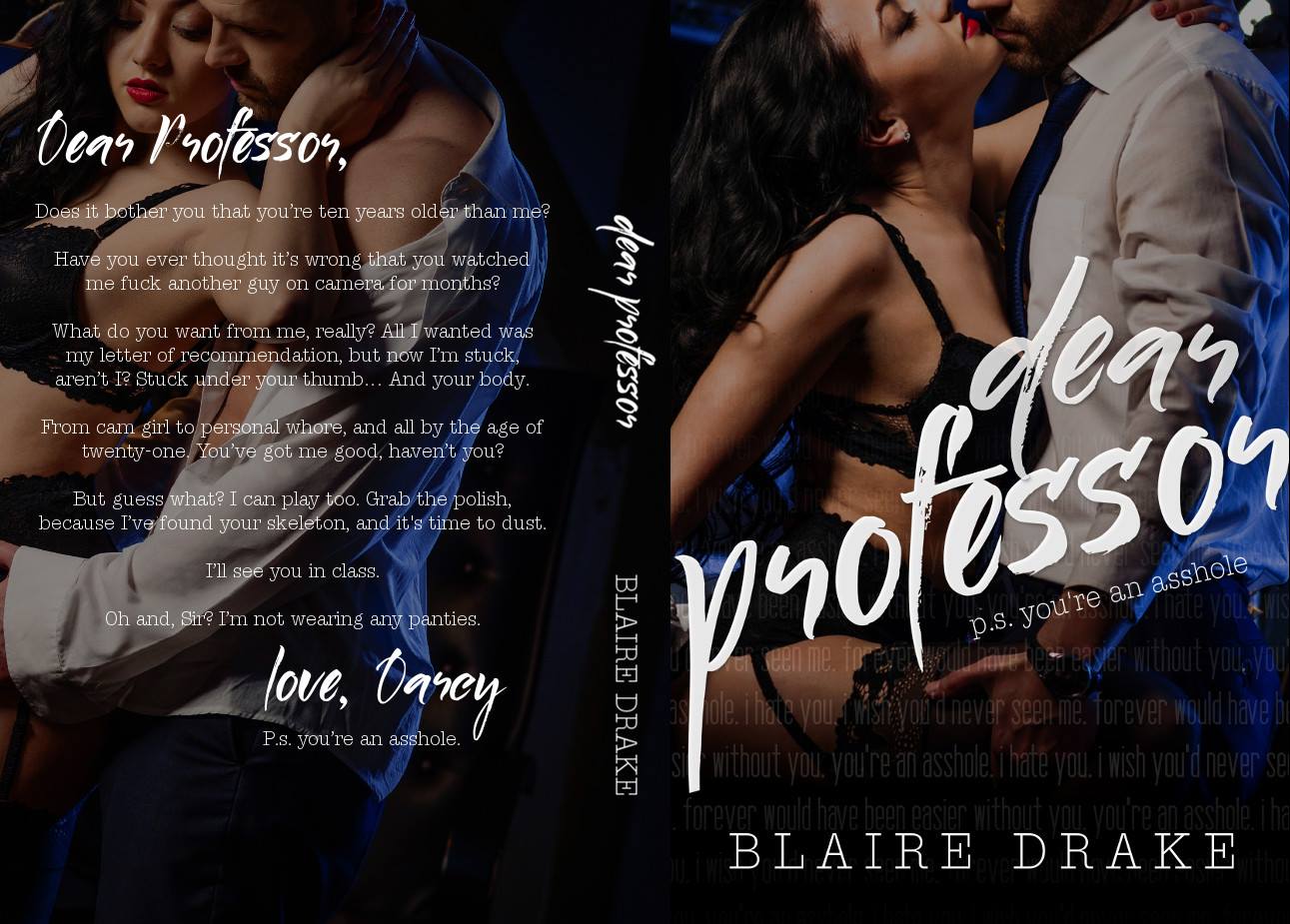 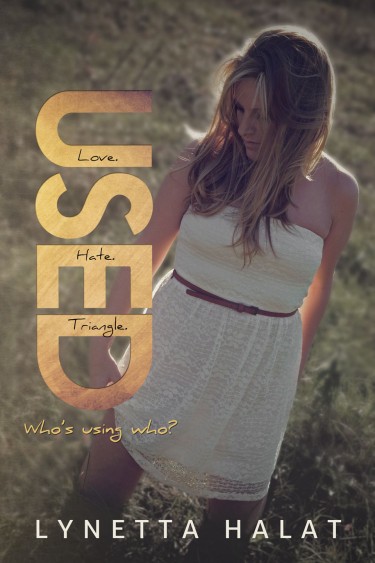 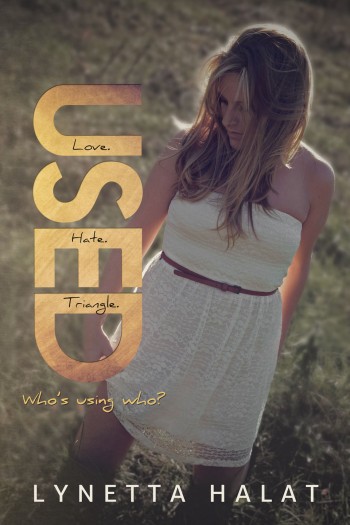