I am so excited it’s release day for Laura Kaye’s East of Ecstasy! East of Ecstasy is the final book in her Hearts of the Anemoi Series. See below for a note from Laura and an excerpt!

You guys! I can’t believe release day for East of Ecstasy is finally here! This is the final book in my Hearts of the Anemoi series, which includes: North of Need, West of Want, and South of Surrender. The Anemoi were wind gods the Greek associated with controlling the wind, weather, and seasons. In East of Ecstasy, hero Devlin Eston is the heir to the East Wind which has long been associated with unluckiness, misfortune, and, thanks to Devlin’s father, even evil. Devlin himself has been the victim of father’s evil, and thereby finds himself an outcast among his own divine family. In this scene, heroine Annalise Fallston—who gets visions that she’s forced to paint in order to quiet them in her mind—sees Devlin for the first time. Here’s what she says:

Forcing the chaos in her mind away, Anna dipped her brush into the gray and stepped to the canvas. Motion captured her attention from the corner of her eye.

The Dark Man, the subject of her recent paintings, stood in the doorway and leaned against the jamb.

Anna jumped and her pulse raced, but this time, anger flooded in instead of fear. “I will deal with you on my own damn terms,” she said, taking a perverse amount of pleasure from putting a figment of her imagination in its place. Because that’s all he was.

He didn’t move or speak. Not that he could, since, you know. Figment.Of.Imagination.

Anna rolled her eyes, done with being scared and so pissed to have to do this again that she was nearly out of her mind. “I’m doing your damn painting already. So just leave me alone.” She cut her gaze back to the expanse of white, but the desire to see if his image would still be there if she looked again drove her to distraction.

Finally, she gave in and…he was still there.

Was this a vision? Another image she’d have to paint?

Her heart tripped into a sprint, and she couldn’t look away from him. Like the compulsion that forced her to paint these images, Anna couldn’t help but return his stare and memorize his masculine features. The sharp angles of his face, the harsh set of his mouth, the dark shadows around his even darker eyes.Black eyes. Blades of black hair hung low over his forehead and just touched the hooded shirt he wore under his short, scuffed leather jacket. He’d crossed his arms over his chest, and the position caused his biceps to bunch up under the worn leather. In fact, everything about him appeared worn—the coat, the threadbare jeans, the scuffed boots. None of it struck her as the kind of shabby chic you could buy in some upscale store for a small fortune, either. The whole effect was rough. Dangerous.Deprived.

Deprived? What a strange way of describing him. But as Anna’s gaze swept over him again, the thought stuck. For his height, he seemed thin, with his lean hips, clad in old black jeans, a trim waist, and pronounced cheekbones. Her fingers twitched around the nearly forgotten paintbrush. What would it feel like to cup that harsh face in her hand?

Anna gasped and tore her gaze away. She had to blink to pull herself out of the haze of thoughts. Frustration surged through her and tensed the muscles of her shoulders and neck. She didn’t want to be working on another of these paintings as it was, so the last thing she needed was to lose a bunch of time daydreaming. Or would it be daynightmaring?

As she stared at the blank canvas, the image of the shackled man behind the prison bars filled her mind’s eye.

Curiosity pulled her eyes to the left again. The doorway was empty.

So, did you have a favorite line from the excerpt? Thanks for reading!

Annalise Fallston made peace with postponing her big-city dreams to care for her ill father, but lately she’s been filled with a restlessness not even her beloved painting dispels. Worse, the colors don’t speak to her as they always have, and all her efforts produce dark, foreboding images of a dangerous man and a terrifying future.

Devlin Eston, black-souled son of the evil Anemoi Eurus, is the only one who can thwart his father’s plan to overthrow the Supreme God of Wind and Storms. But first, Dev must master the unstable powers he’s been given. Distrusted and shunned by his own divine family, he never expected to find kindness and passion in the arms of a mortal.

But Devlin’s love puts Annalise in the path of a catastrophic storm, and in the final Armageddon showdown between the Anemoi and Eurus, sacrifices will be made, hearts broken, and lives changed forever…or lost.

Catch up on the whole series with the Hearts of the Anemoi box set featuring the first three books: North of Need, West of Want, South of Surrender! 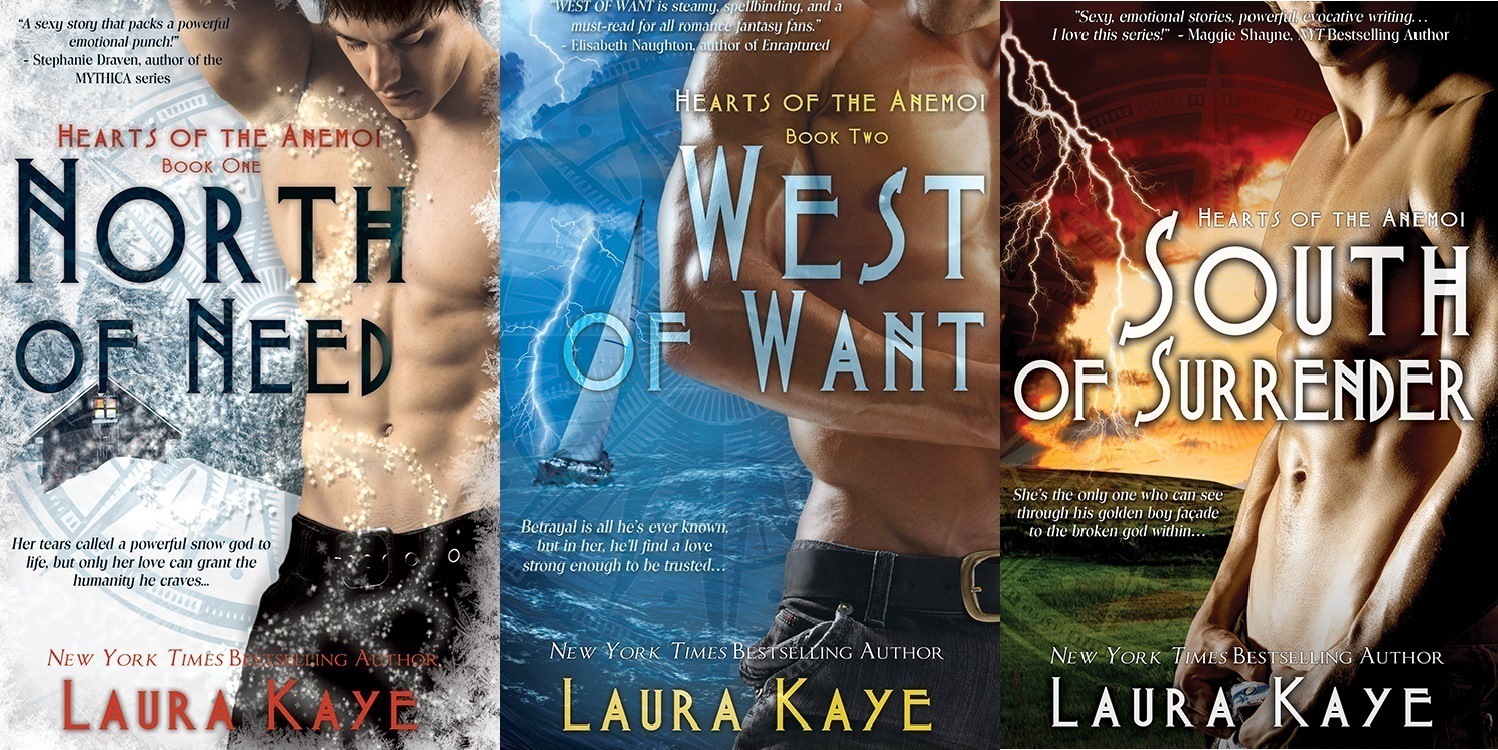 Laura is the New York Times and USA Today bestselling author of over a dozen books in contemporary and paranormal romance. Growing up, Laura’s large extended family believed in the supernatural, and family lore involving angels, ghosts, and evil-eye curses cemented in Laura a life-long fascination with storytelling and all things paranormal. She lives in Maryland with her husband, two daughters, and cute-but-bad dog, and appreciates her view of the Chesapeake Bay every day.