Since the day Tanya and Leo met they have held an intense attraction for each other. After a hot and passionate night together Tanya is scared that her feelings for Leo are changing from lust and into something more. She doesn’t want to fall in love with the playboy drummer, that’s just begging for her to get hurt.

Leo loves Tanya’s no nonsense attitude, she’s different to all the other girls that surround him and he wants her. After their explosive nights together he knows it goes deeper than just sex but Tanya wants to keep quiet about them from their friends and that secretly pisses him of.

Tanya leaves Leo’s after an argument and they don’t see each other for four years. That time apart has left Tanya feeling more and more angry with Leo and Leo craving beautiful and sexy blonde women. They just don’t compare to his beautiful angel and he wants her again, Tanya just won’t give him a chance to explain. 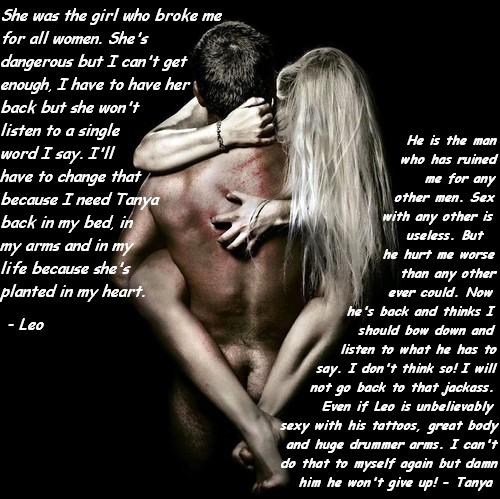 I poke my hip out and cross my arms; trying to look casual. I’m hoping that he can’t tell that I’m lying. It won’t hurt to make him think I was with someone last night. Leo frowns, taking a step forward. “You didn’t leave with anyone last night, you went home with Maisy.”
I notice Maisy’s laughter has stopped. Great, her and Max are eavesdropping. The girl acts as though she doesn’t like drama, but she sure does seem to like to get all up in my shit. I take a step away from Leo’s intense gaze, coming to a stop when my back smacks into the limo. Oh shit, I don’t want to be trapped by Leo, I can’t. I take a deep breath, calming myself. “You don’t know who I met once I left.”
I see his jaw tense, maybe I shouldn’t tease him, but why should he be bothered? All I ever was to him was a great fuck. Why should he care if I sleep with other men? “Did you?”
I avoid his glare. “It’s not your business.” I go to move to the side of him, but he slams his hand down on the car, stopping me from walking past. Oh shit. I turn around, but he has me trapped against the limo with his arms.
Fuck! Fuck! Fuck!
I can’t be trapped by him, in his sexy arms! It might seem silly, but his arms really do affect me like that. I can’t look up at him, if I do I’ll be a goner. His beautiful blue eyes affect me just as much as his muscled arms. That’s the mistake I made last night.
“Don’t fuck about Tan, tell me. Did you leave with someone last night?” I don’t answer him. I know I can end this right now by telling him no, but I can’t do that. That would mean I’ve lost, and I’m not prepared to do that. Leo presses his body against mine and I tense, his body feels so good, hard and warm. His body is so perfect, I can’t have him pressing it against me, I’m already responding to him. He leans down, speaking directly into my ear; it sends shivers all over my body. “Did you fuck someone last night? Tell me now, because I need to fucking know.”
“No you don’t.”
“Yes I do. I need to know if someone’s tried to take what’s not theirs. You’re mine, angel.”
I gasp, shoving at his chest. He doesn’t move at all. “You’re a fucking jerk, Leo!” I duck under his arms fast enough that he can’t stop me. I point my finger in his smug, beautiful face. “I am not yours; you lost that right four years ago.”
Leo frowns and tries to reach out to me. “Angel-“
I move away so he can’t touch me. “No! Don’t call me that! You can’t call me that anymore!” 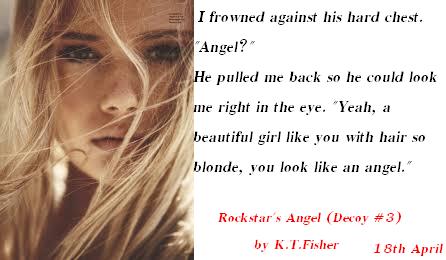 Previous Books In the Series

Before we had Rockstar Daddy, there was A Rockstar’s Valentine…….As soon as I set eyes on the gorgeous guy who saves me from having to dance with yet another jerk, I thought he would be just like the rest. His bad boy rocker image definitely screamed heart breaker, but I was wrong. Boy was I wrong! Yes, Jax can sometimes act like a caveman but he’s different than the rest and I can’t seem to forget about him. Not that he will give me the chance to forget about him! But why would someone like Jax, who has more than enough experience be interested in a little virgin like me? I thought for sure he was a heartless player when I first met him but I quickly figured out that wasn’t the case at all.As soon as I spot the sexy little red head walk in, I’ve already laid her down and claimed her. Now it’s just getting her to realize that, along with all the fuckers who seem to be eyeballing her. I soon find out that Kendal is addictive and I need to have my fill of her regularly. How a man before me has never gone that far and claimed Kendal for himself before is beyond me but thank fuck they haven’t because Kendal will be completely mine.

Kendal Moore and Jax Parker have been together for two years but when Kendal finds out she’s pregnant at twenty she has to make the right choice. Her boyfriend Jax is in the up and coming rockband Decoy and if she keeps this baby she knows Jax will quit and support her and the baby, but does she want that? She loves him so much and she doesn’t want him to give up his dream of getting his band Decoy signed. So Kendal makes the hard choice of leaving Jax and not telling him that she is pregnant.Rockstar Daddy takes place four years after Kendal leaves Jax. Kendal is a hard working single mum to Finley and Jax is a huge rockstar. Read Rockstar Daddy to follow Kendal and Jax’s journey, will Jax find out that he has a son?

After finding each other after four years, Jax has found out the truth that he’s Finley’s dad. Even though Jax is angry with Kendal for keeping him away from his son, he still wants Kendal back. In Jax’s eyes Kendal has always been his. He will have her back, even if that means having a fight in the middle of a club. Kendal knows she loves Jax but she doesn’t know if she should tell him or not. She doesn’t want Finley confused. Jax knows that Kendal loves him and after telling her, he thought Kendal would confess too. Jax knows just the way to get her to admit to her true feelings. Surely getting Kendal hot and sweaty and on the verse of an orgasm will do the trick. Join Kendal and Jax to see if they can finally be together again. Amongst the paparazzi, concerts and annoying ex partner can they find their happiness? Read Rockstar’s Girl to find out.If you haven’t read Rockstar’s Daddy you will need to, before you read Rockstar’s Girl.