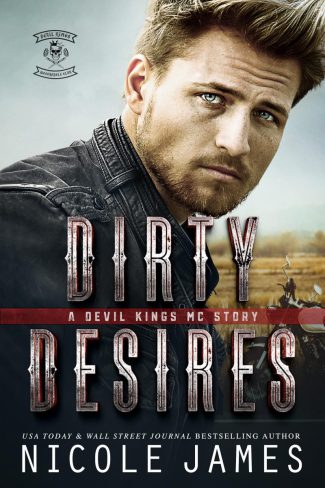 A twist of fate threw us together…

I’m a Devil King; loyal to no one but my club, until she comes along and tests everything I thought I believed in.
When I do a favor for my imprisoned ex-president’s ol’ lady, I come face to face with the one-night-stand that’s haunted me for three years. She pulled a disappearing Cinderella act on me, vanishing with the dawn. I searched high and low for her, and now that I’ve found her—she’s the definition of off-limits. She’s an MC princess—my MC’s princess. And even if her father no longer runs things, she’s still forbidden with a capital F.
Tell that to my traitorous body that reacts every damn time she gets within sight of me.
They say no good deed goes unpunished, and I’m learning this golden haired beauty could be the death of me.

Though our chemistry blazes, every second I spend with her risks the brotherhood we’ve just repaired.

I’ve never wanted anything to do with my father’s filthy MC, The Devil Kings. With daddy dearest in prison, my mother is falling apart. Her struggle with anxiety, drugs and money problems drag me back from the independence I crave. She needs my help and my father holds the key—literally.

But when he insists I get him information on the Devil Kings in exchange, I’m thrust into a world I want no part of. My father may be their EX-president, but I’m still considered an MC princess.

When my mother pulls in a favor and arranges an escort for me down to the prison, he walks in—a patched member of the Devil Kings MC—and a memory from a one-night stand we had three years ago.

But there’s a reason I ditched him the next morning; I want nothing to do with men like my father. Gypsy is everything I need to steer clear of—he’s an outlaw, a Devil King, dangerously sexy and loyal to his club.

As my mother’s world falls apart, my choice becomes clear.
But how do I choose between saving her and betraying the man I love? 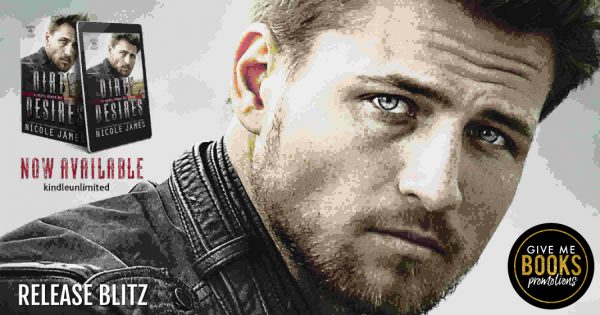 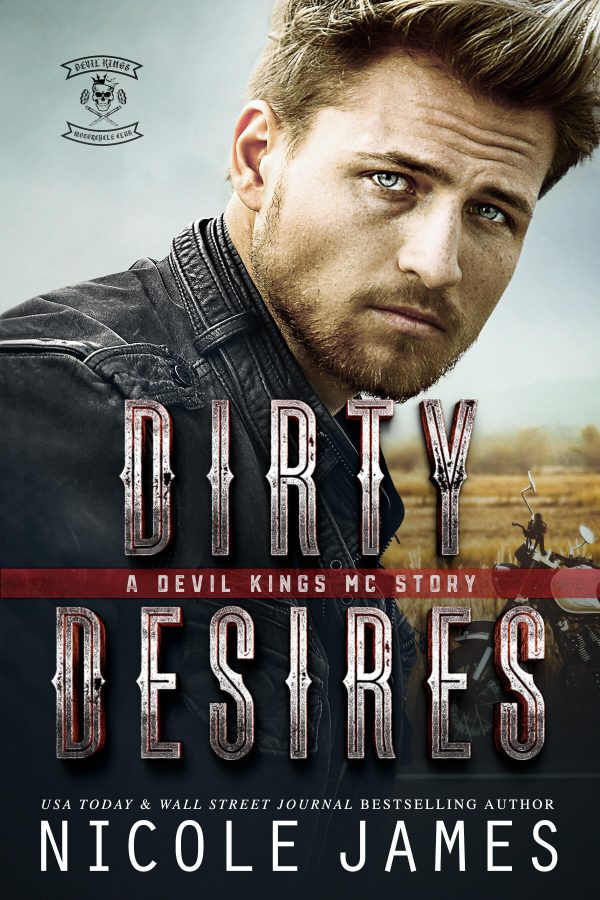 I wake up and glance around. Nope, it wasn’t a dream. A clock by the bed says six a.m. I blink against the morning sun and stare over at the man in bed with me. He’s on his stomach, the sheet just barely covering his ass. The cute little dimples at the base of his spine are revealed. I go up on an arm to get a better view now that there’s light in the room, and that’s when my eyes hit the full back tattoo— the one I couldn’t see in the dark last night.

I don’t need to read the words; the exact replica of the Devil Kings MC’s center patch tells me everything.

Oh. My. God. What have I done? He’s turned away from me, and all I can see is his profile. Goddamn it, he can’t be one of them. No. I scream on the inside but keep still as a statue on the outside. My heart races, and I feel light headed. This can’t be happening. Lord, please tell me I did not just sleep with one of my father’s MC brothers.

I scan the room, my gaze furtive. That’s when I spot the black leather cut hanging over the back of a desk chair, its colors on full display. Devil Kings MC, Georgia.

How could I have been so stupid?

The last thing on this earth I want is to go down the same road my mother did. I worked too hard getting my associates degree in business administration and working my ass off at my job, fighting tooth and nail to be considered for the promotion to events planner to throw it all away for some biker, even if he is the best sex I’ve ever had.

Panic sets in, and I know I have to get the hell out of this room, out of this house. Now.

I slip from the bed, scoop up by clothes, and grab my little cross body bag that barely holds my phone and wallet.

I tiptoe across the room and pause in the doorway. I can’t resist taking one last look at the man. He was amazing last night. We clicked sexually in a way I’ve never experienced.

I sigh at the unfairness of it all and slip out.

I move down the hall and stop in the kitchen to scramble into my clothes. It’s as neat as the rest of the house, and I wonder if there’s a girlfriend he’s cheating on who comes over and cleans his place. Asshole. I want to believe it because I want to wash away all the good from last night and replace it with a different painting—one of a jerk who’d cheat on his woman. It’ll be easier to walk away, and I know I have to walk away. There is no way in hell I’m getting involved with one of those bastards from my father’s MC. No fucking way.

I quietly move through the garage and into the cool morning air. I jog half a block away before I pull my phone out and call Hayley.

On the third ring, she picks up, sounding groggy as hell. “…’lo?”

Her voice immediately perks up. “Tess? Where are you?”

“I just walked away from his house. Can you come get me?”

“I’m fine. But you aren’t going to believe who this guy is.” 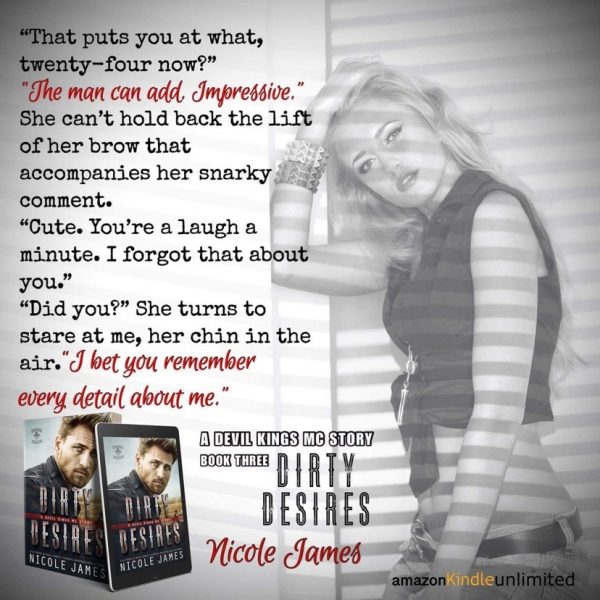 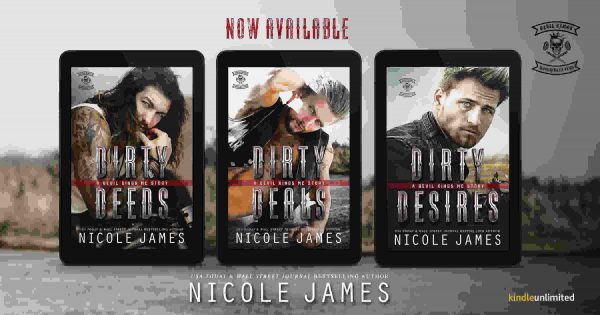 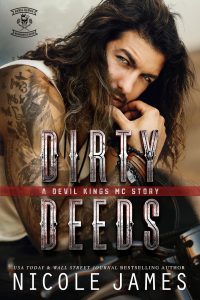 Kara Harbinger’s only crime is having a court judge for a father. One who just happens to be presiding over the criminal case of the President of the Devil Kings MC. The DKs are about to use the biggest Achilles’ heel he’s got to bend him to their will, to buy his decision, to buy his very soul.

I want nothing to do with this job, but I can’t get out of it.

As a member of the Devil Kings MC, my life is a violent existence hinged on loyalty to the oath I took: Devil Kings before all else. I’m the club’s muscle, the brother they give the vicious, vile jobs, the dirty deeds. When it comes to my club, I do whatever they ask, whatever they need.

Then I see Kara, all sweet and innocent with her soulful eyes and sexy body. She’s a bright light in my dark existence. In her eyes, I see an escape from the brutal life I’ve lived for so long, a life void of feelings, emotions and light. She gives me the faith to believe I can have more, to believe I can have everything.

What do I do when my VP wants her taken as leverage to use against her father?
What do I do when one look at Kara threatens everything I thought I held dear?
What do I do if they want me to put a gun to her head and end her life?
I’ll have to convince her to trust me if I have any hope of getting us both out of this alive.

I’m not supposed to want a man like Reno. He’s dangerous—a lawless, badass, alpha biker. I know I should be afraid, but the way he looks at me, with hunger in his eyes makes me want to become his.
I believed the lies he told me. I thought he was a good guy.
But when he takes me hostage, everything I thought about him is turned on its head.
Now he expects me to trust him, even as he holds me captive.
How can I trust a man whose loyalty is to his club, a club that wants me dead? 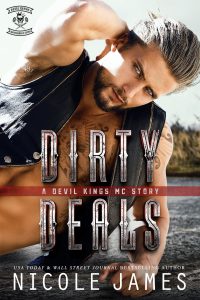 I’m the president of the Devil Kings Atlanta MC. With a fractious club to rebuild and a revolving door on my bedroom, the last thing I need is 5’4” of sex-on-a-stick trouble.

When a mysterious beauty shows up with her playmate’s body, dark soulful eyes and a bagful of cash, I’m willing to make an exception.
I don’t fully trust her, but she needs my help.

Things are finally good. I’m one of the best high-roller hostesses on the strip. But I’ve lived in Las Vegas two years and have yet to unpack my bags. Why? Because shit always goes sideways. I should have known this time would be no different. When I’m asked to hostess a private poker game at a mega exclusive hotel penthouse, I end up in the proverbial wrong place at the wrong time.

I’m the sole witness to a double murder and I’m suddenly on the run again, but this time I’m running for my life. I get as far as Atlanta before my Porsche blows a tire. That’s when he shows up. Dangerous. Drop-dead gorgeous. Scary badass biker. One I can’t take my eyes off. Maybe this town is as good as any to lay low.

When trouble tracks me down, I want to run again. But he has other plans. He’ll protect me—for a price. My willing body in his big bed—all night, every night. That’s the dirty deal he offers. Dare I accept?

Where the President of the Devil Kings is involved, there are no rules. But I’ll stand toe-to-toe with him and make it out of this bargain with my heart intact. Because in the end, running is what I do best. 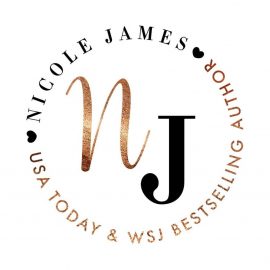 Nicole James is a USA Today and Wall Street Journal bestselling author who loves writing about hot alpha men who’ll do anything for the women they love! Her stories are filled with struggle, conflict and real human emotion. She is the author of the Evil Dead MC series, the Brothers Ink Tattoo series and more.