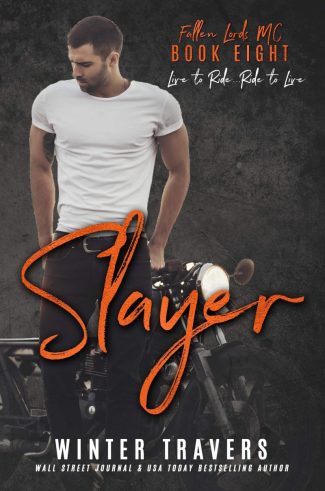 An unexpected guest on the steps of the clubhouse turns Slayer's world upside down. Scrambling to make sense of everything and adjusting to a life he never expected has Slayer asking for help from the last person he thought could ever help him.

Can the feisty woman be the one to help him, or will she realize Slayer and the new woman in his life is too much to deal with? 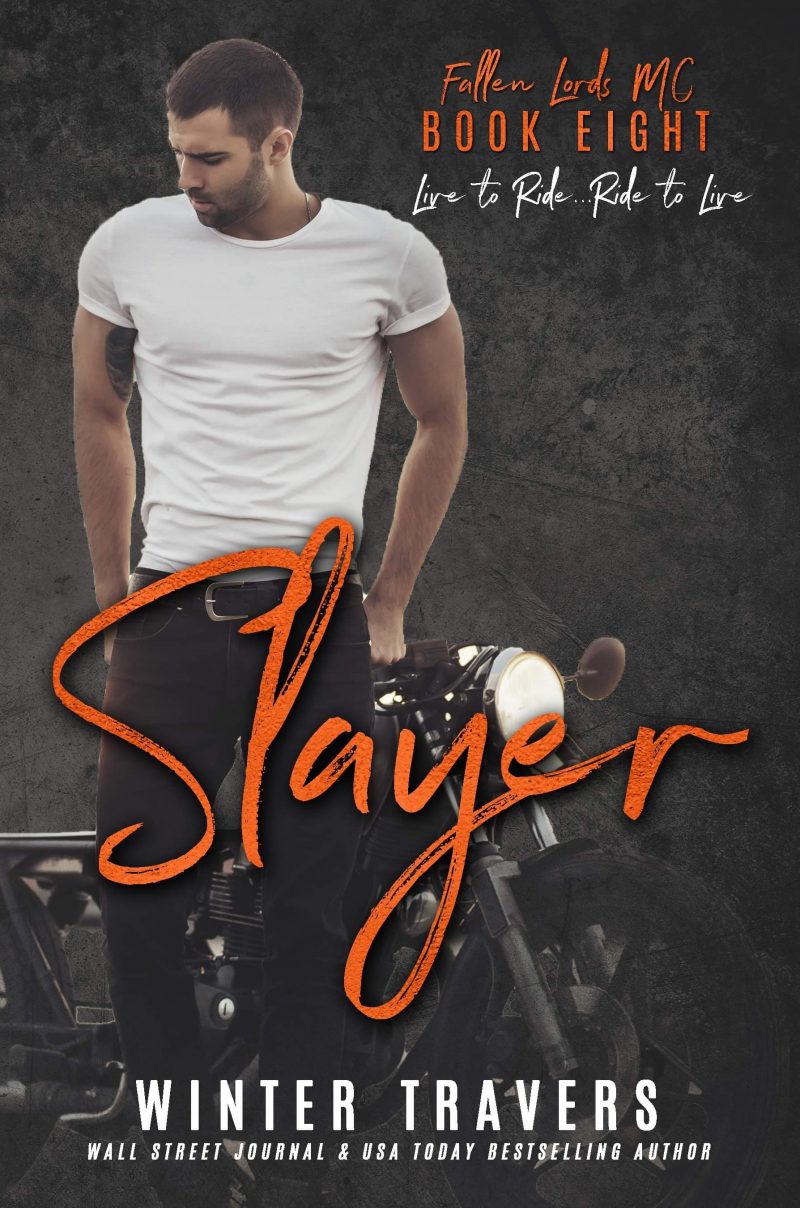 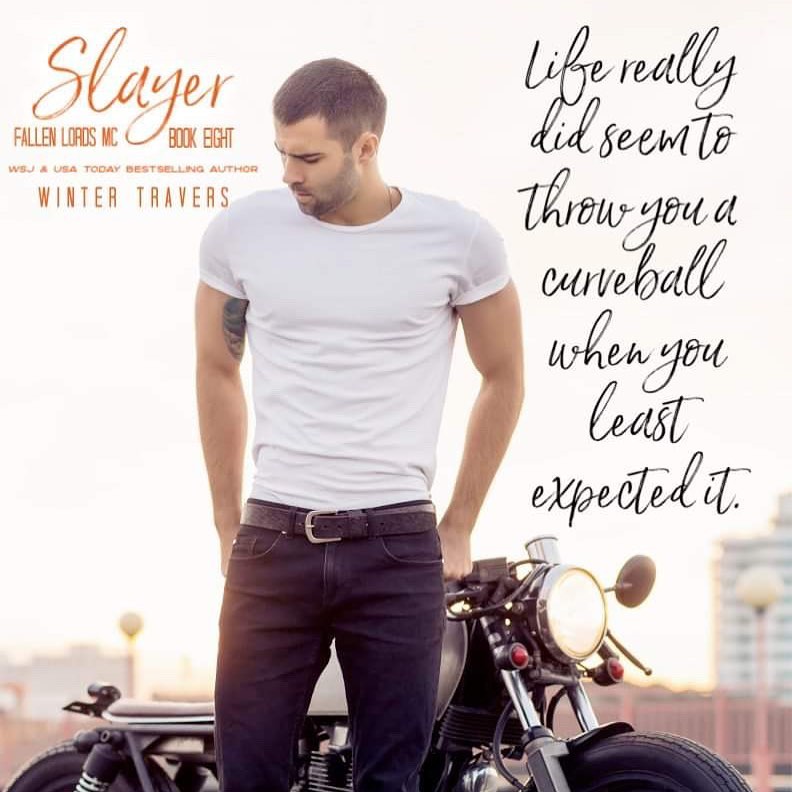 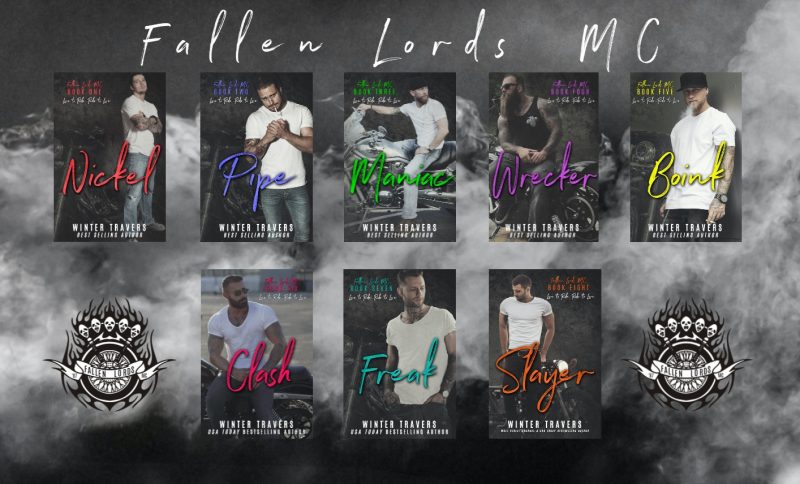 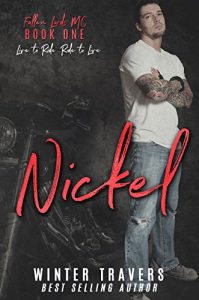 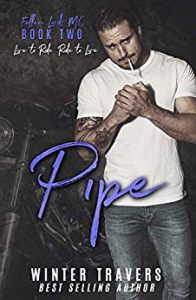 Nikki Nomad’s life is in shambles. Growing up in and out of foster care, she rarely lets anyone in. After watching her best friend Karmen fall in love, Nikki starts to soften to the idea of a happily ever after with Fallen Lords V.P., Pipe.
He’s ruggedly handsome with a careless attitude, and it’s the exact lethal and sexy combination that breaks Nikki’s heart, reminding her life is far from a fairytale and making her run away from the few people she loves.

Pipe Mark cares about one person and one person only.
A revolving door of women might spend the night in his bed, but they all know the score before they step foot through the door.
1. No promises. 2. One night.
They all respect the rules and go on their merry way more than satisfied in the morning.
All except Nikki.
Nikki makes Pipe want more. He never has before, but he longs to make promises of ending each night tangled in each other’s arms. He just realizes it all too late. 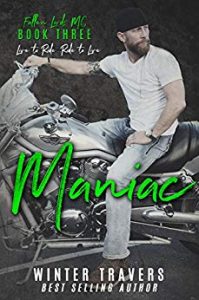 Wren Glass was done. She couldn’t continue to live the lie everything was okay, when in reality, she was dead inside. After being used and abused by the Hell Captains MC, Wren lands in the lap of Maniac. A man who sees her as nothing more than a chore.
A man just like the one she managed to escape.
At least, that’s what she thought.

Maniac West isn’t a man to mess with. Not with him and not with his club. When he is assigned to watch over Wren, he ignores how he feels about the woman with the soulless eyes. Something in them makes him crave to return light there. But Wren is a job. No more, no less.
That all changes when Wren decides she doesn’t want to live.

A woman battered and bruised from the inside out, with no will to live, needs a hero.

Maniac isn’t a hero, but he will turn hell upside down and burn it to the ground to avenge the woman who fell into his world. Anything to bring back the light in her eyes. 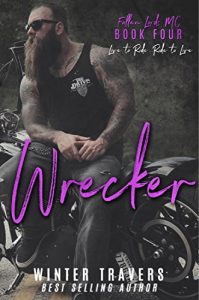 Wrecker lives for the Fallen Lords MC. The club is the only thing he cares about. Until her.

Alice’s world is spiralling. The one person she thought she’d always have is gone, leaving her to pick up the pieces of her own shattered heart. Except, the only way she can find to do that may ruin her.

When Wrecker gets the call to check in on Alice, the woman he finds is just a shell of the outspoken crazy lady he knows her to be. That guts him. He wants the real Alice back, and he’ll stop at nothing to pull her out of the darkness 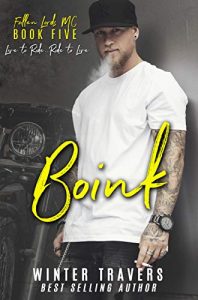 Letting his president’s sister get kidnapped was not Boink’s finest hour as a member of the Fallen Lords MC. Now it’s time to pay the price protecting the very woman who distracted him from his job in the first place.

Mayra needed a safe place to land and the Fallen Lords clubhouse was the perfect solution, until her past puts everyone in danger. Her only option is to leave with a man she swears can’t stand her.

This time Boink won’t fail protecting what is his. Whatever is coming for Mayra will have to go through him and the Fallen Lords first. 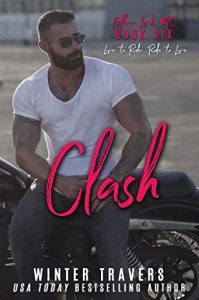 Raven‘s secrets have shaped the woman she is; solitary and closed off. After being let down by the one person that should have always been there, Raven has built her wall up so high, nobody could possibly scale them. She takes care of herself. She has her own back. She might live surrounded by her brother’s club, the Fallen Lords MC, but the family and brotherhood they preach is a load of crap and she isn’t buying any of it.

Babysitting his president’s baby sister isn’t a hardship. Keeping Raven safe from the Ultra isn’t a problem for a man like Clash either. Keeping her from being destroyed by her inner demons is what threatens to bring him to his knees. When truths come to light and clash with reality, Clash is determined to be the one Raven can count on. Even if she refuses to admit it’s what she needs. 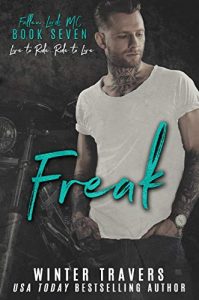 Freak has watched his brothers fall for the women they love time and time again and is more than familiar with the signs of a man about to hand over his heart.

When Carnie comes tumbling into the clubhouse asking for help, all it takes is a bat of her innocent stare and sassy tongue for Freak to know what is about to happen. But when he finds out how old she is, he hesitates to stake his claim. As a Fallen Lord through and through, he will make sure to protect her even though he’s promised himself not to touch her.

Can Carnie convince Freak age is just a number, or is he on a one way track out of her life?