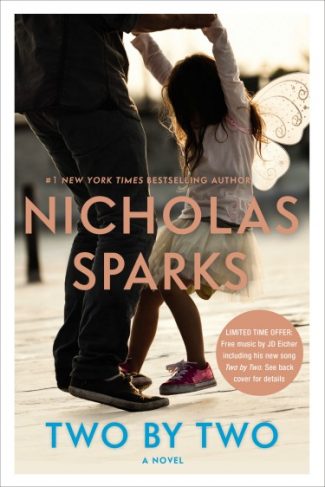 At 32, Russell Green has it all: a stunning wife, a lovable six year-old daughter, a successful career as an advertising executive and an expansive home in Charlotte. He is living the dream, and his marriage to the bewitching Vivian is the center of that. But underneath the shiny surface of this perfect existence, fault lines are beginning to appear...and no one is more surprised than Russ when he finds every aspect of the life he took for granted turned upside down. In a matter of months, Russ finds himself without a job or wife, caring for his young daughter while struggling to adapt to a new and baffling reality. Throwing himself into the wilderness of single parenting, Russ embarks on a journey at once terrifying and rewarding-one that will test his abilities and his emotional resources beyond anything he ever imagined. 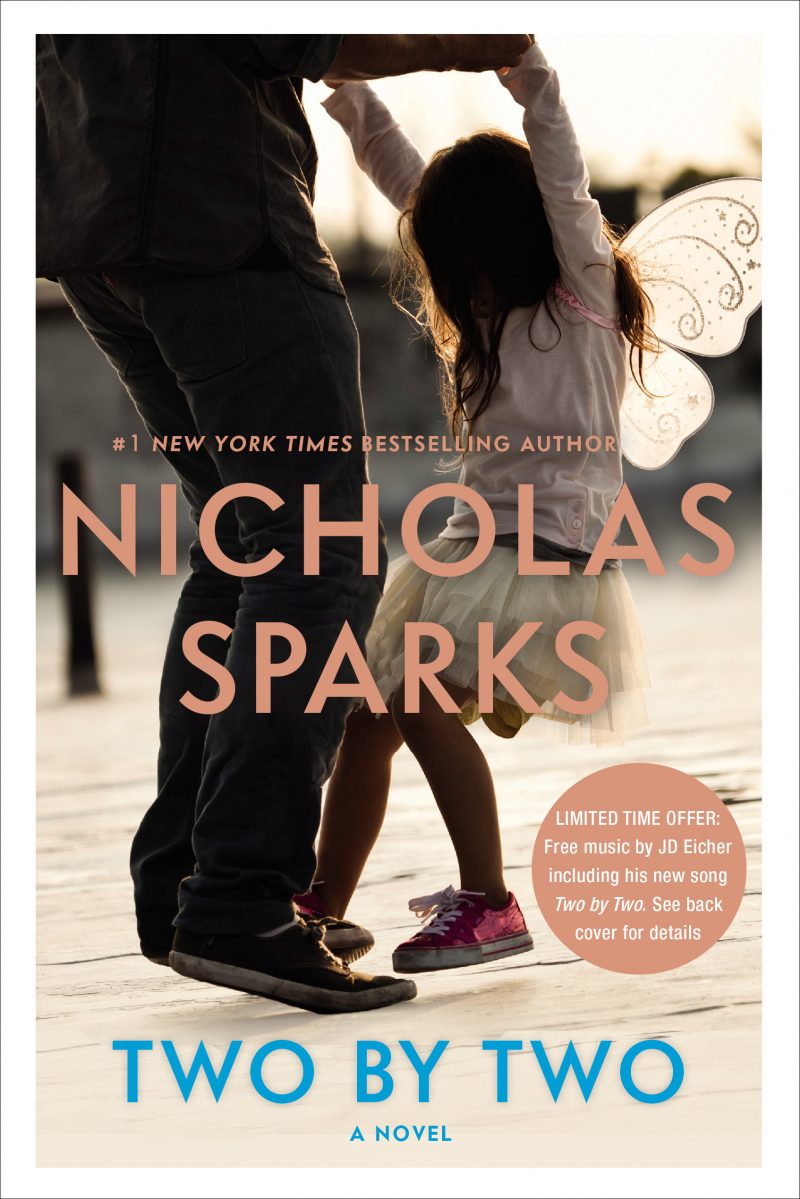 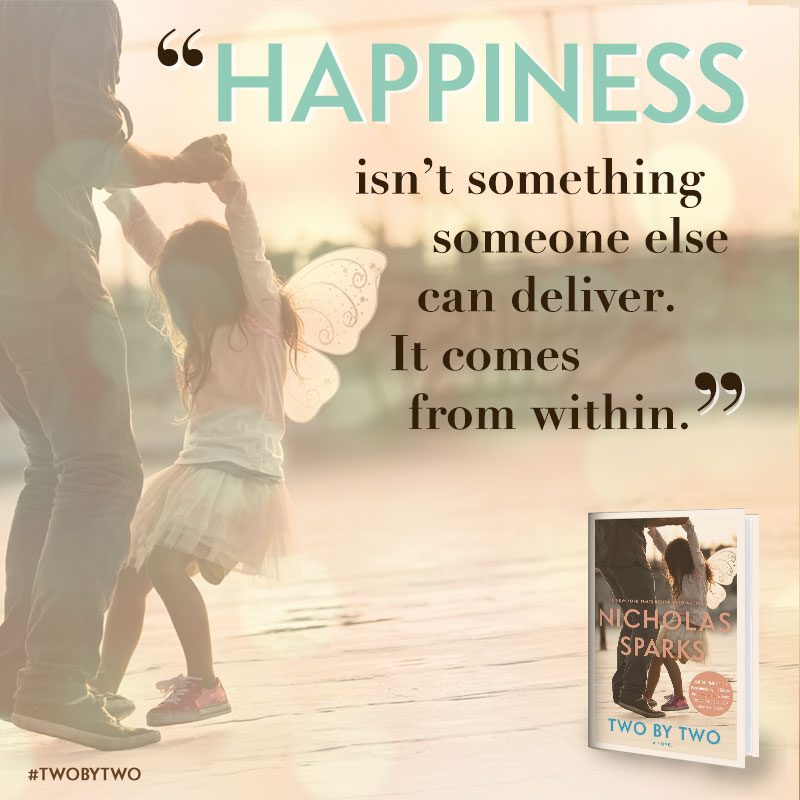 Inspiration for Two By Two

As a father of three boys and twin girls, I couldn’t be more aware of the unique relationships parents have with each of their children. In Two By Two, I chose to delve into the bond between a father and daughter, exploring the challenges, the risks and of course the rewards.

This is a powerful story of unconditional love, not only between these two characters but also with the family members that surround them. Sometimes life doesn’t go as planned, but it’s how you take each step forward, how you mend or break bonds, that can define your future. This novel allowed me to examine the emotional reserves we all have as families and how we can strengthen those in time. 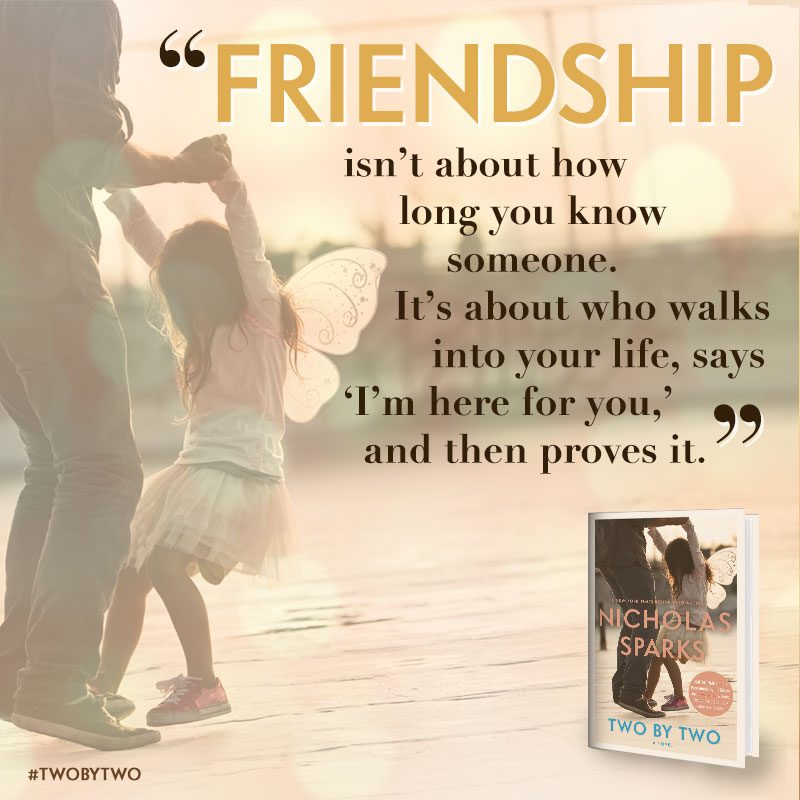 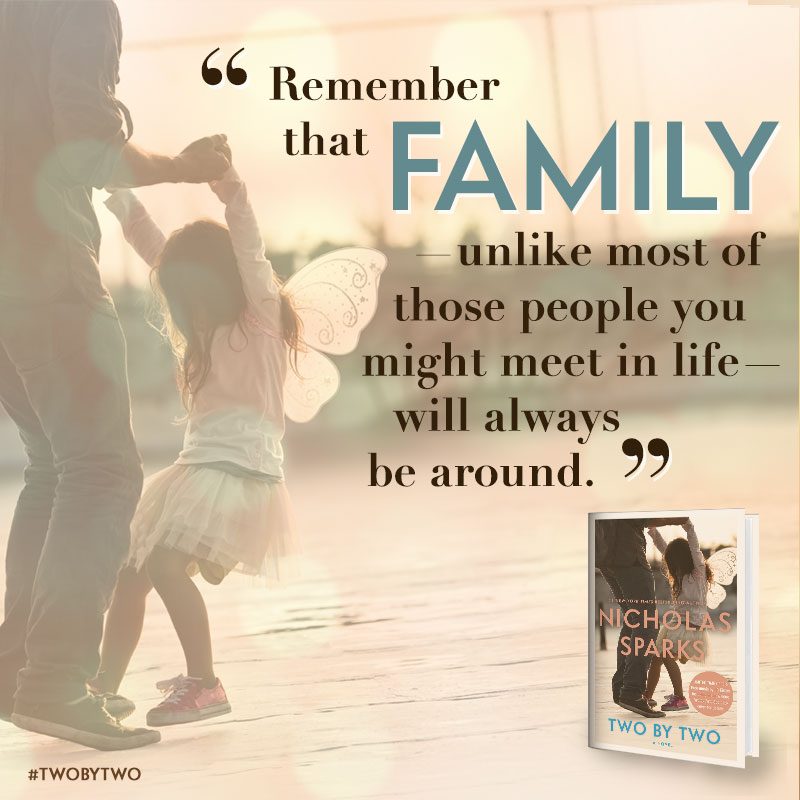 As a child, Nicholas Sparks lived in Minnesota, Los Angeles, and Grand Island, Nebraska, finally settling in Fair Oaks, California at the age of eight. His father was a professor, his mother a homemaker, then optometrist’s assistant. He lived in Fair Oaks through high school, graduated valedictorian in 1984, and received a full track scholarship to the University of Notre Dame.

After breaking the Notre Dame school record as part of a relay team in 1985 as a freshman (a record which still stands), he was injured and spent the summer recovering. During that summer, he wrote his first novel, though it was never published. He majored in Business Finance and graduated with high honors in 1988.

He and his wife Catherine, who met on spring break in 1988, were married in July, 1989. While living in Sacramento, he wrote his second novel that same year, though again, it wasn’t published. He worked a variety of jobs over the next three years, including real estate appraisal, waiting tables, selling dental products by phone, and started his own small manufacturing business which struggled from the beginning. In 1990, he collaborated on a book with Billy Mills, the Olympic Gold Medalist and it was published by Feather Publishing before later being picked up by Random House. (It was recently re-issued by Hay House Books.) Though it received scant publicity, sales topped 50,000 copies in the first year of release.

He began selling pharmaceuticals and moved from Sacramento, California to North Carolina in 1992. In 1994, at the age of 28, he wrote The Notebook over a period of six months. In October, 1995, rights to The Notebook were sold to Warner Books. It was published in October, 1996, and he followed that with Message in a Bottle (1998), A Walk to Remember (1999), The Rescue (2000), A Bend in the Road (2001), and Nights in Rodanthe (2002), The Guardian (2003), The Wedding (2003), Three Weeks with my Brother (2004), True Believer (2005) and At First Sight (2005) all with Warner Books. All were domestic and international best sellers and were translated into more than 35 languages. The movie version of Message in a Bottle was released in 1999, A Walk to Remember was released in 2002, and The Notebook was released in 2004. The average domestic box office gross per film was $56 million — with another $100 million in DVD sales — making the novels by Nicholas Sparks one of the most successful franchises in Hollywood.

The film rights to Nights in Rodanthe, True Believer and At First Sight have been sold, and Nicholas Sparks has written the screenplay for The Guardian, though he has not offered it for sale at this point.

He now has five children: Miles, Ryan, Landon, Lexie, and Savannah. He lives in North Carolina with his wife and children.

His ancestry is German, Czech, English, and Irish, he’s 5’10” and weighs 180 lbs. He is an avid athlete who runs daily, lifts weights regularly, and competes in Tae Kwon Do. He attends church regularly and reads approximately 125 books a year. He contributes to a variety of local and national charities, and is a major contributor to the Creative Writing Program (MFA) at the University of Notre Dame, where he provides scholarships, internships, and a fellowship annually.