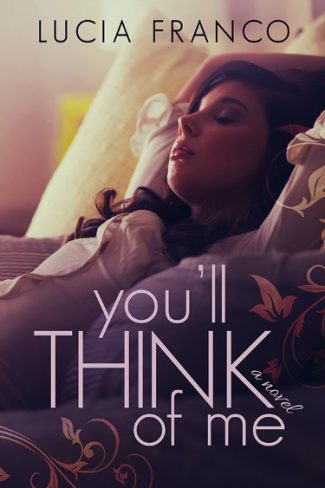 Luke Jackson.With his thick southern drawl and seductive charm, Luke is the country boy everyone adores. He has his future mapped out, but his plans with Olivia are suddenly derailed when she makes a decision that blindsides him, changing the path they both envisioned.As Luke struggles to keep everything in check during a difficult time in his life, he must put his trust in the one person who broke it to begin with. The last time they saw each other, Olivia busted his heart wide open, turning him into the man he is today.When Olivia returns to her roots, just like Luke said she would, he is shocked for more reasons than one. Nine years have passed since they've seen each other, and when their roads collide unexpectedly, Luke can only push his worry and misgivings away for so long.Things are different now—they are strangers—and the rope that once bound Olivia's heart to South Fork, Georgia is pulling her back in, forcing her to remember how it used to be all those years ago. 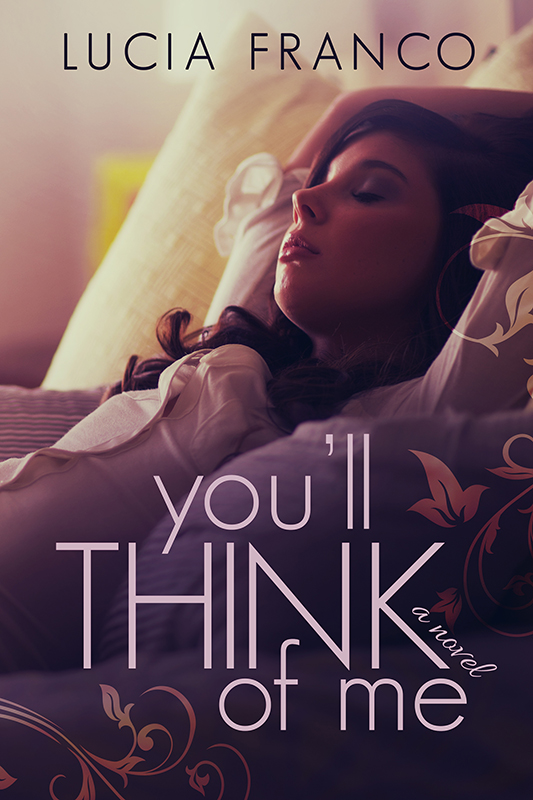 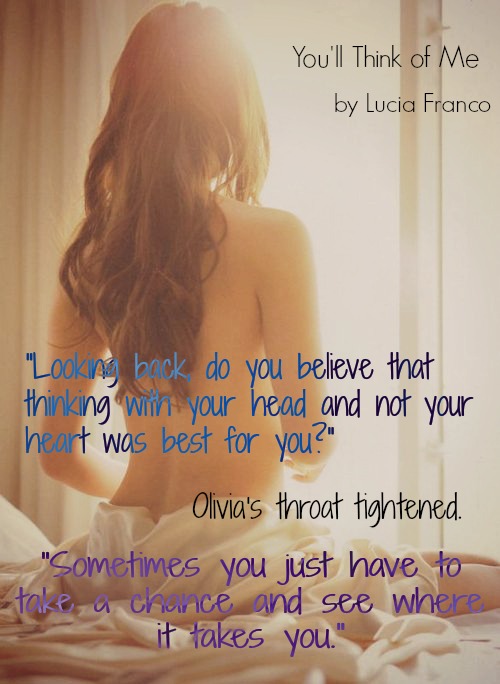 “Nate,” she groaned with a sigh. “There can’t be anymore dates between us. I’m sorry, but this is the one and only date. I had a great time tonight, but this is it.”

“How about you let me decide that,” he said in all seriousness.

“No. We can’t. As much as I enjoyed myself tonight, this is it. No more. Don’t you see the lines we’re crossing?”

Olivia’s forehead wrinkled with concern. How was it that he didn’t have a drop of worry? Was he only thinking about himself?

“I do see that,” he said moving in closely, “but I don’t give a fuck about any imaginary lines, Olivia. I want you, and I’m pretty sure you want me too. So what’s the problem here? And don’t give me that patient/doctor shit. I told you I would switch doctors. What’s your problem? You can’t deny the chemistry between us. It’s there. It’s pulling at us both and you know it. I can read your eyes and see it. It’s been there since the day we met. Don’t deny it.”

Olivia glanced around the parking lot. Deep down she wasn’t sure if she was ready to put herself on the line again, but by the deep undertone he used, she knew Nate was fuming.

“I understand,” he answered staring down at her, “but you diagnosed my problem and it seems like an easy one to fix at that. So I could switch doctors with no issue. Nate-3-, Livy, still 0. Go ahead. Give me another reason, Liv, and that will put me at 4 points and you 0, because you know I’ll win that one too.” He formed his fingers into a ‘0’ as he said it with a know-it-all-defensive-fucking-try-me attitude.

Shit. She was all out of reasons, not that she had many to begin with. She was holding back. Her one gripe was the fact that she was his doctor and he just blew that argument out of the water.

Olivia didn’t want to get hurt and feared she would. It was a gut feeling she didn’t want to ignore. She was afraid to be around Nate. He managed to knock down some of her walls, expose her layers so early on and she wasn’t used to it. No one other than Luke had done that to her. She knew she’d fall hard for him, but not until she was ready to on her terms. When the time came she would let go and love again.

“Stop thinking so hard,” he demanded with a drawl. “I can see it spinning in your pretty brown eyes.” He was just an inch away from her now and breathing down on her.

“I see what you’re doing, finding ways to say no,” he whispered. “You’re so easy to read, Liv. I know you already in this little amount of time. I paid attention to you, your body. Your incredibly sexy body that I want so, so fucking bad…” Nate trailed off, growling under his breath as he slid an arm around her lower back and pulled her up against him.

“Stop looking for an out,” Nate insisted.

“Says who? You? You’re the one fighting me on it right now, Liv. Don’t tell me you don’t feel it between us. Just let go and give us a damn try.” 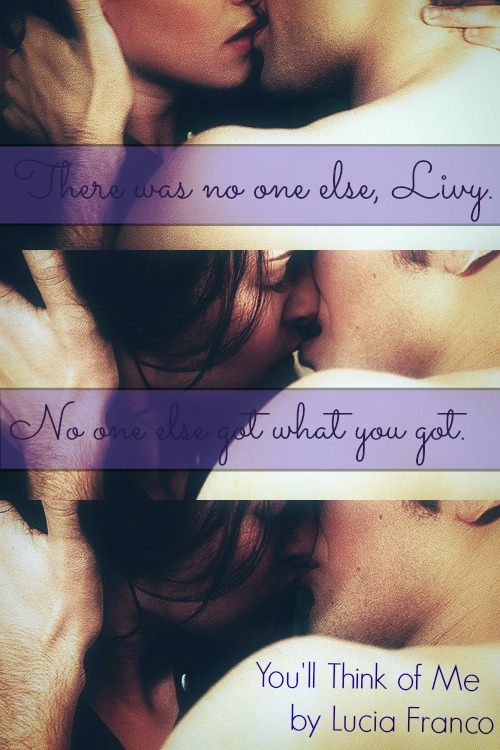 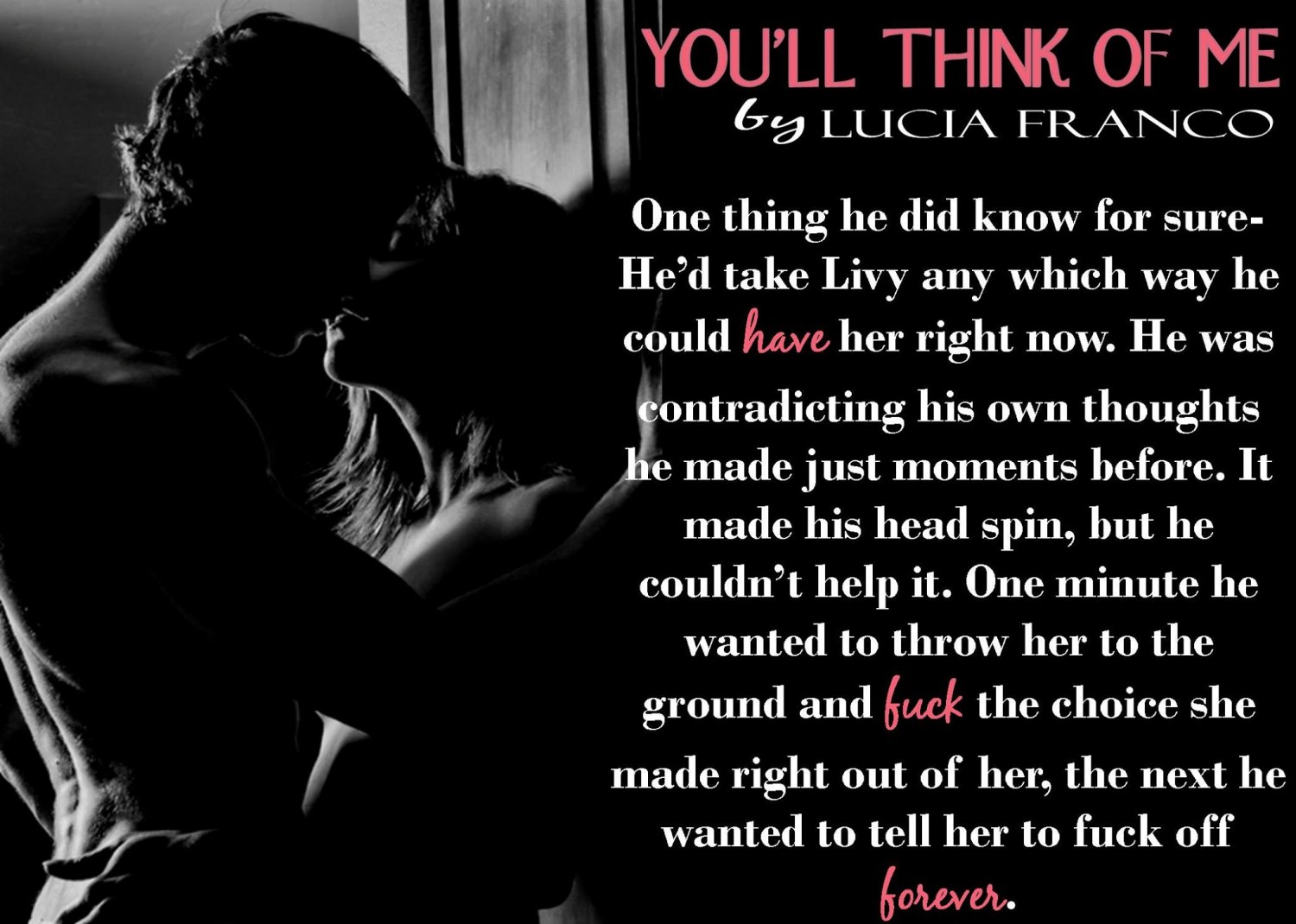 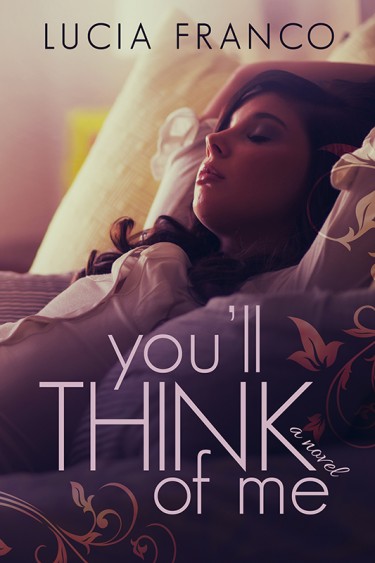