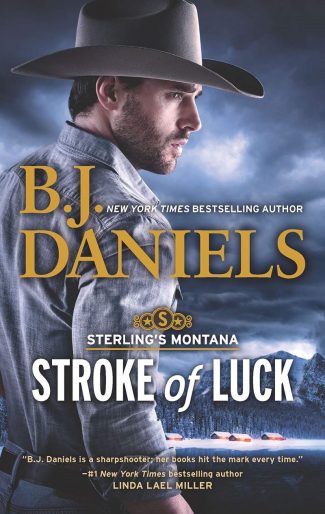 He’s hoping to bury the past. She’s ready to settle the score.

The Sterling Ranch’s season opening isn’t going so smoothly. With the ranch’s lodge full of guests and a Montana blizzard threatening, Will Sterling needs help—and he needs it fast. So when his childhood friend Poppy Carmichael agrees to lend a hand, he’s grateful for a second chance... and more enticed by the woman she’s become than he cares to admit.

For Poppy, it was supposed to be a retreat full of horse rides and hoedowns—with a side of showing Will what he’s been missing all these years. But as the snow deepens outside, the guests’ suspicion and mistrust turn sinister inside, catching Will and Poppy in the crosshairs.

Weathering the storm in each other’s arms is all too easy for Will and Poppy, but will a confrontation with a killer mean their reunion is short-lived?

New York Times and USA Today bestselling author B.J. Daniels starts her Sterling’s Ranch series off with a bang in this suspenseful story of romance and revenge. 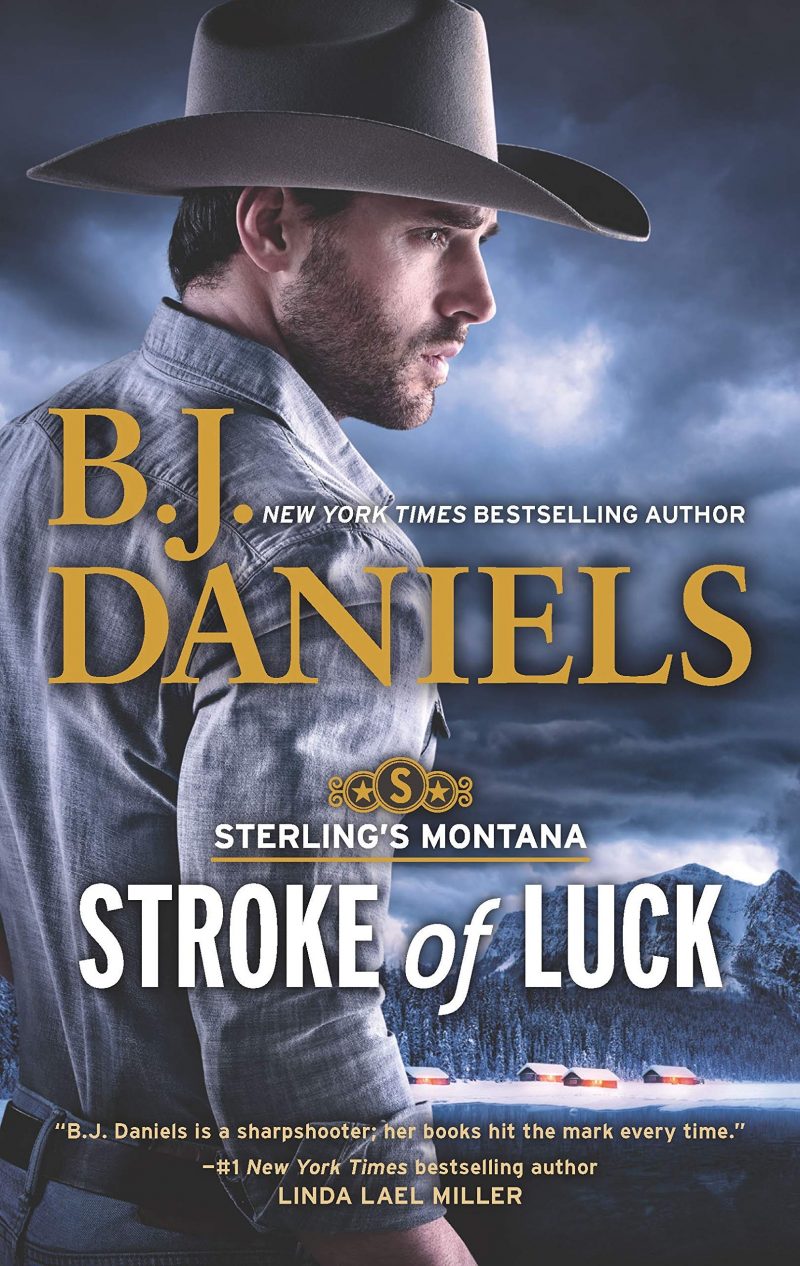 Stroke of Luck is now available! Grab your copy today! 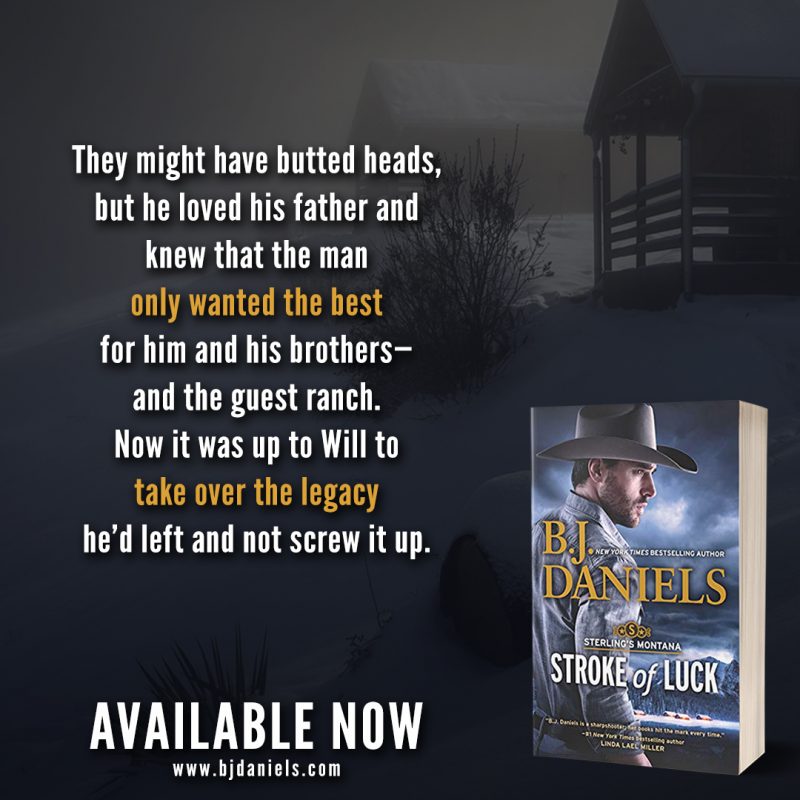 He groaned. “You aren’t making this any easier.” He was already short-staffed. Normally the guest ranch didn’t take guests this early in the season. Late spring and summer were the guest ranch’s busiest times, with a fall season for hunters. But a friend of their father’s had made a special request for Will to open for four days in March.

Big Jack Hanson owned a small fly-fishing vest company outside of La Quinta, California, called On the Fly. Big Jack wanted to hold a retreat for some of his employees at Sterling Montana Guest Ranch, a place from his youth. He’d been uncompromising on when.

Although anxious to get his first season running the guest ranch alone started, Will had tried to talk him out of it, reminding him what the weather could be like this time of the year in the mountains of Mon­tana. Also that they would be short-staffed. Which meant that the guests would be making their own beds each day and taking care of the housekeep­ing in their cabins. Dorothea would be helping in the kitchen and making sure their guests had every­thing they needed from daily treats in their cabins to clean towels.

“Sounds perfect,” Big Jack had said. “Won’t hurt them a bit to do for themselves for what time we’re there.”

A charismatic, large man with red hair like a fire­plug, blue eyes and a talent for hyperbole, Big Jack had offered to pay extra. “My crew needs this. I need this. You don’t have to roll out the red carpet or go to any trouble.” Spoken like a man who knew nothing about hosting guests. But Will had given in since, at one time, Big Jack had been like family. He knew his father would have wanted him to do whatever was necessary to accommodate Big Jack and his employees.

At the sound of the shuttle van arriving from the airport down in the valley, Will knew he couldn’t be choosy about a cook. His guests would be expecting dinner tonight and since neither he nor Dorothea could do more than boil water…

He called information for Poppy Carmichael’s number and was put right through. The moment she answered, he hesitated, reminding himself of why this was a bad idea on so many levels. He and Poppy had a history—and not a good one. True, it was twenty years ago, but still…

Through the front window, he saw his guests begin to pile out of the van. They were all wearing what appeared to be new matching navy winter jack­ets with an On the Fly logo on the back and match­ing stocking caps. They looked tired from the long trek from the airport up into the mountains outside of Whitefish, Montana. They also already looked hungry.

“Poppy?” He cleared his voice. “It’s Will. Will Sterling. Up at the Sterling guest ranch.”

The sound of her voice threw him for a moment. It was soft, refined, his name spoken on almost an amused breath.

He plunged on. “My cook, Buckshot Brewster, broke his leg and I’m desperate, as I have guests ar­riving as we speak. Is there any way—” Dorothea was shaking her head and mumbling again about bad luck and this whole retreat already being cursed.

“How long?” Poppy said on the other end of the line.

“Four days starting today, Sunday. The guests leave Wednesday afternoon. If there is any way you can fit it into your schedule…”

A soft laugh. “So you need me.” There was a small hesitation before she said, “Right away.”

“Yes! I have nine guests that have to be fed to­night. I’m sorry for such short notice. If you can swing it, I’ll pay your going rate and a bonus at the end of the four days. What do you say? Buckshot brought most of the supplies up already and my brothers just delivered the rest, so I think we have everything you’ll need to cook up here. We have our own supply of beef, bison and elk, and plenty of canned goods. We just need a…cook.”

An amused chuckle. “I see.” 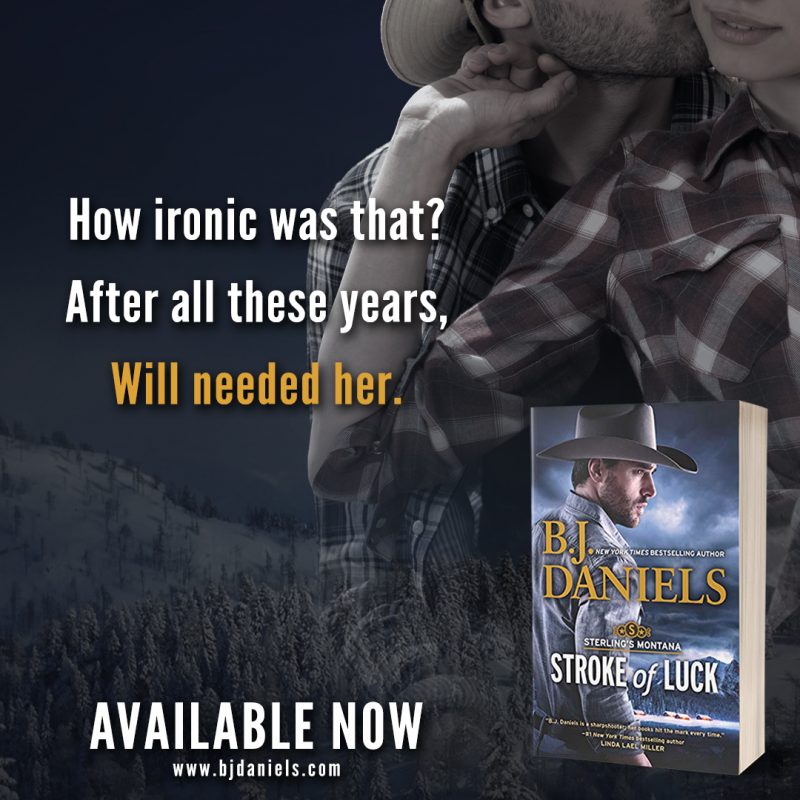 NYT and USA Today Bestselling author B.J. Daniels was born in Texas but moved with her family to Montana at the age of five. Her first home was a cabin in the Gallatin Canyon and later a lake house on Hebgen Lake outside of West Yellowstone.

Most of her books are set in Montana, a place she loves. She lives now in a unique part of the state with her husband and three Springer Spaniels.

When she isn’t writing, she loves to play tennis, boat, camp, quilt and snowboard. There is nothing she enjoys more than curling up with a good book.