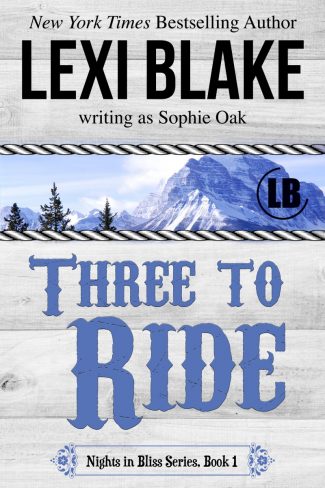 A stalker sent Rachel's world reeling. Now she's running for her life, and Bliss, CO, seems like the perfect place to hide. Bliss is a strange little town, filled with artists, nudists, and the occasional conspiracy nut. It's a good place to start over.

Horse trainer Max and Sheriff Rye gave up on their dream of finding one perfect woman to share long ago. Rachel walks in, and they're both in love and fighting their true natures.

When Rachel's past catches up with her, all of Bliss is in danger. Rachel knows she should run, but how can she leave behind the love she’s found with Max and Rye and the home she’s built in Bliss? With her whole town behind her, Rachel is ready to make her stand. It's time for her to get back in the saddle and ride. 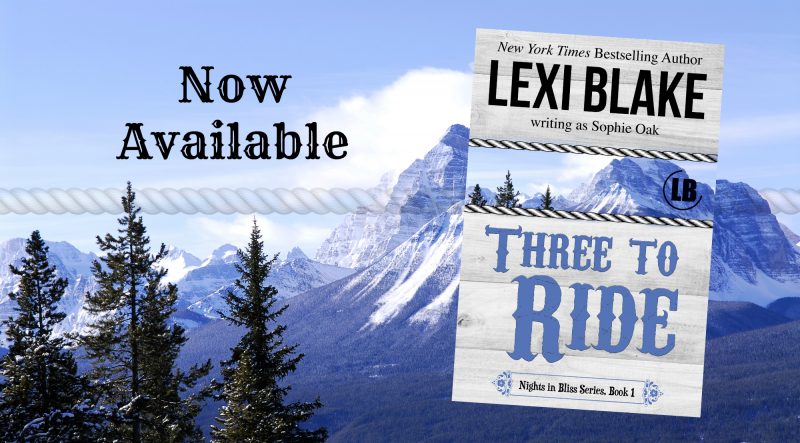 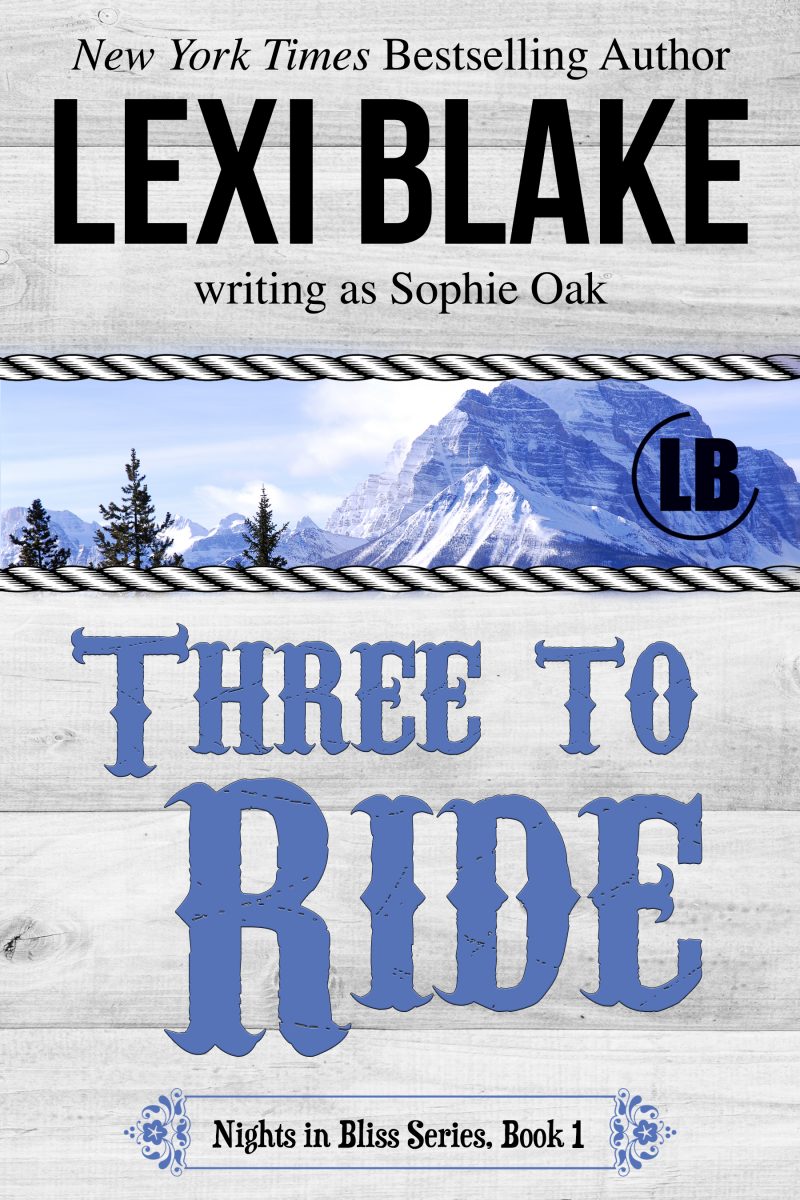 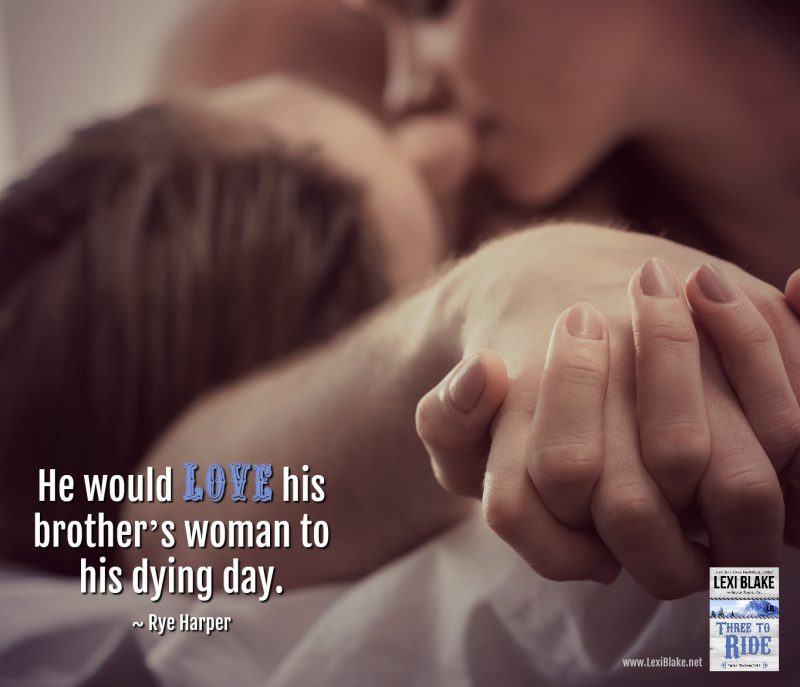 “You should have told me who you were the minute I stepped into the shower with you,” she complained, shoving a blue T-shirt over her head.

Rye ran a frustrated hand through his wet hair. It was so much longer wet. “I couldn’t breathe enough to talk. I’m sorry. I should have locked the door. I should have skipped the damn shower. Hell, I should have spent the night somewhere else. I knew something like this would happen.”

She calmed down as she noticed Rye looked a little tormented. When she thought about it, it kind of was inevitable. Maybe not the stroking him part, but certainly the seeing him less than clothed. “Rye, we didn’t do anything we shouldn’t have. It was a mistake. I’m sure this isn’t the first time a woman got twin brothers confused and ended up seeing more than she should. It’s your house. I’m the one who should be more careful.”

Rye turned away from her. He placed both hands on the dresser. His head fell forward as though he was very tired. “We’ve shared a room all of our lives until a year ago. Even after our parents were gone and we could have, probably should have, taken our own rooms, we didn’t. We moved in here and, when we had the money, renovated to suit our needs. We built this room and that bathroom for the future. I don’t know, Rachel. I just always expected him to be there.”

“I am not trying to take your brother away from you,” Rachel said quietly. Was all this drama worth it when she knew she wasn’t going to be able to stay? Her heart hurt at the thought, but sooner or later, she would have to move on. Until Tommy was caught, she was in danger and so was everyone around her.

She stood there, watching him at war with himself. She wanted to wrap her arms around him and soothe him, but she didn’t have the right. From everything she knew, Max had decided to go straight. He wanted a normal one-on-one relationship. He would probably be upset if he knew how attracted she was to Rye.

Rye shook his head. “I’m leaving tonight. I’ll pack a couple of things and stay at Stefan’s until I can find an apartment.”

“Don’t.” She was horrified at the thought. “I’ll leave. This is your home. I never meant to cause this much trouble.”

Rye smiled slightly, but it was a sad thing. “I can’t watch you and Max. I’ll get to the point where I can be friendly, and we can pretend to be some sort of normal family, but I’ll never stop wanting you. I can’t live in the same house and watch you settle in with my brother. Do you understand the relationship I want?”

“You want to share me with Max.” The statement came out in a low, breathy voice. She had meant to sound matter-of-fact, not sultry.

“Yes, I understand.” Her mouth was dry as she thought about it. She could have both of them. Two gorgeous men, loving her, wanting her. It was the fantasy of a lifetime.

“Max doesn’t want that anymore. I have to choose between pursuing the woman I think I was meant to be with or honoring the brother I’ve shared a life with from the moment we were conceived. Know this, Rach, if he weren’t already madly in love with you, if you hadn’t already chosen him, I would be all over you. That’s why I have to leave.” 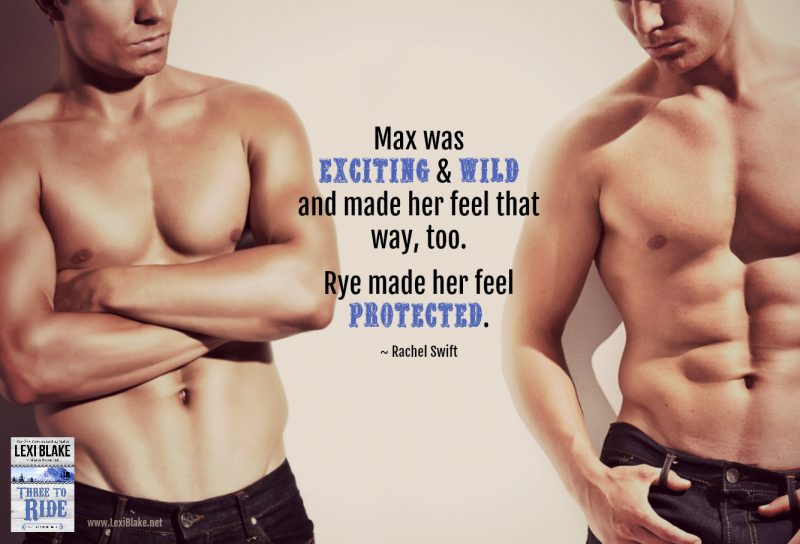 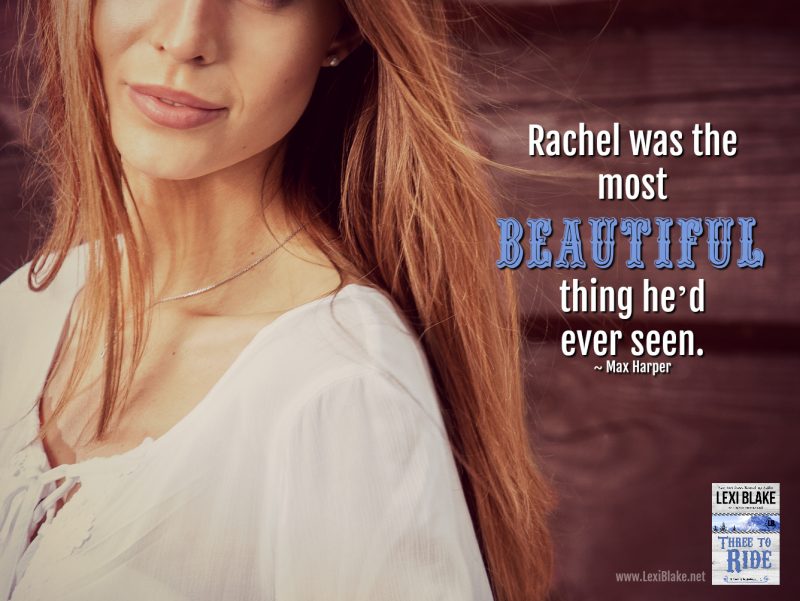