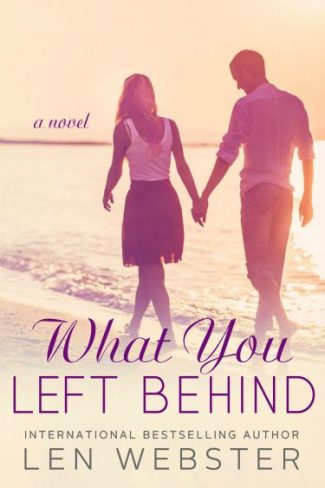 When they meet years later, don't expect a happy ending. The past holds skeletons and not even these skeletons can be buried.

Title: What You Left Behind 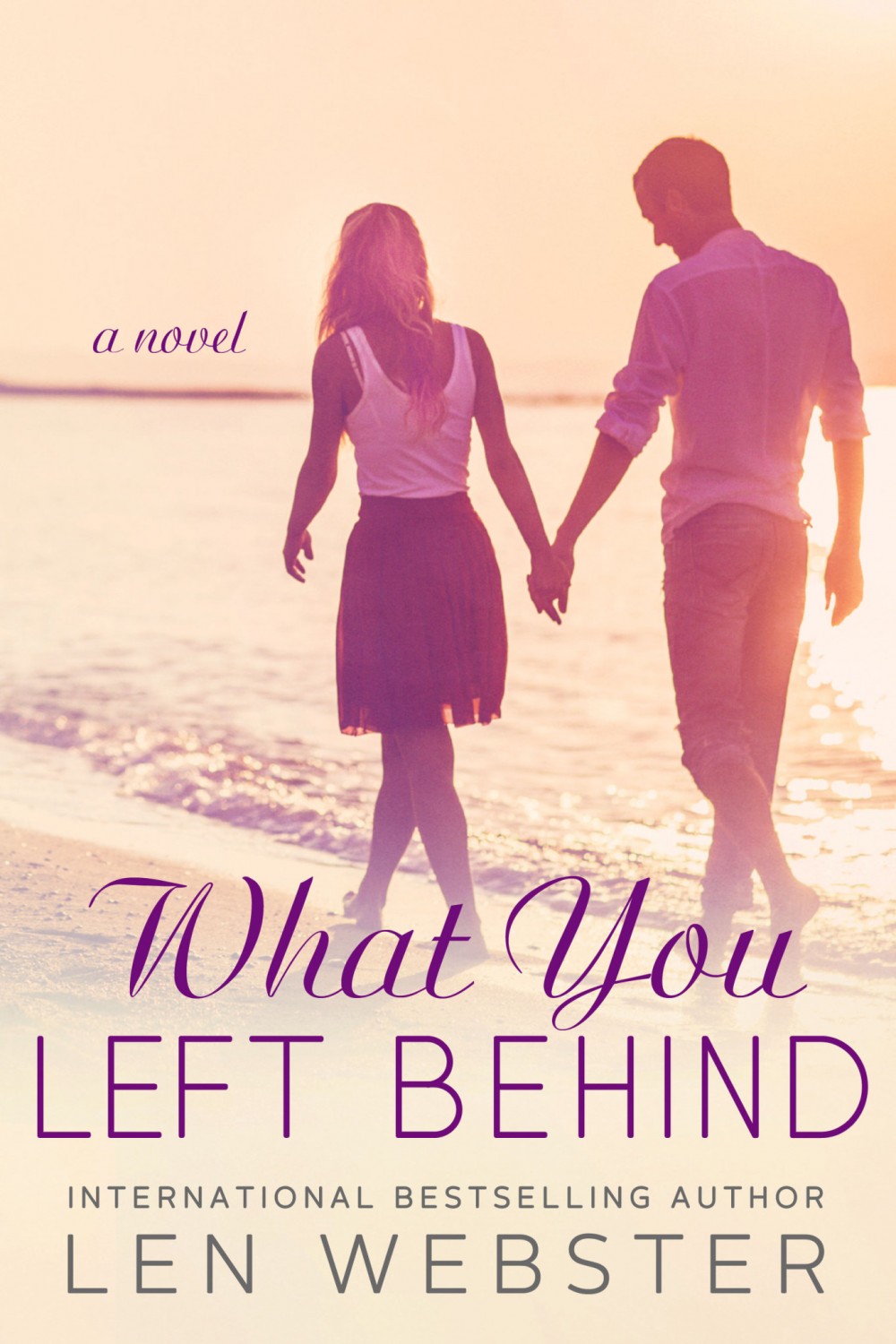 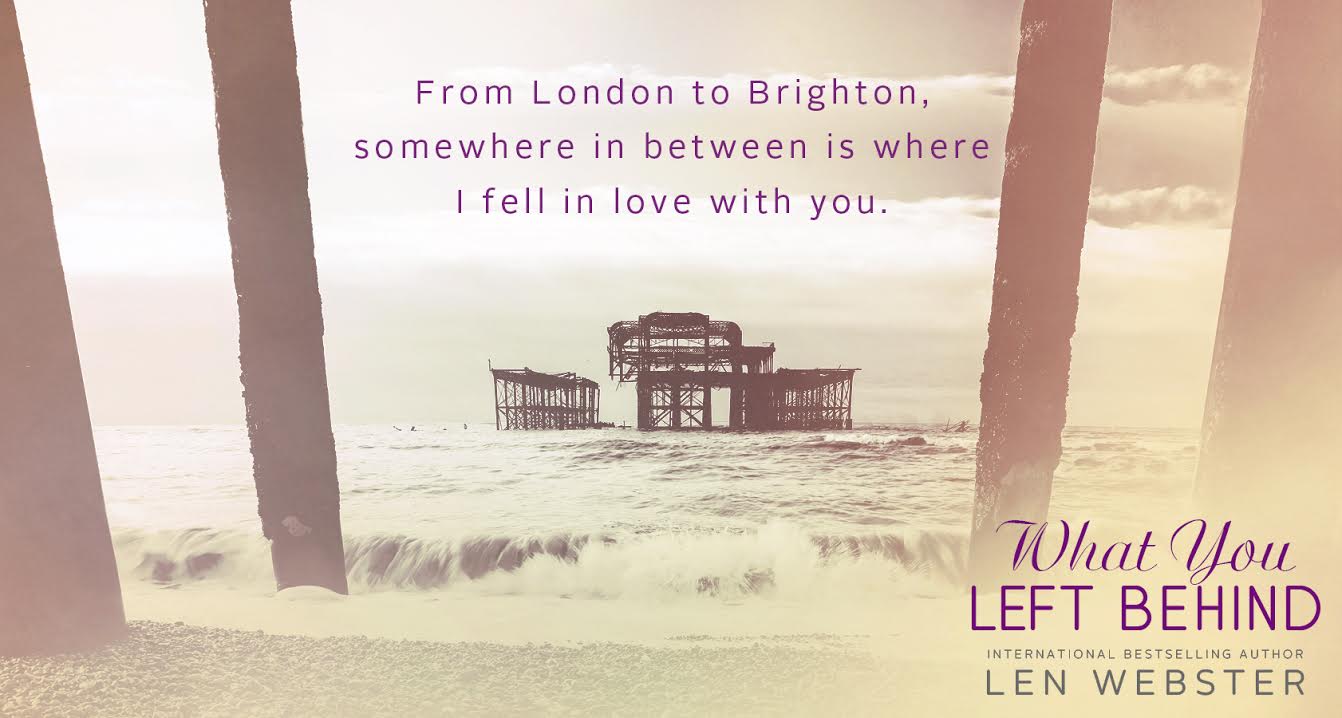 “Blondie, wake up for a second,” Julian whispered in her ear.

Stephanie groaned and shrugged away from his touch.

“Could you maybe put your erection away?”

He peeked over to see her eyes still closed and her cheek rested on the back of her hand. Julian shook her once again. “You’re naked. Are you always this distracting in the morning? I’d like to wake up just once without a hard-on.”

“Julian, I’m going to give you something for your ego.” She pulled the blanket higher, covering her perfect breasts.

Her breasts are magic.

Ducking down, he pressed his lips against the smoothness of her neck. “My ego is ready.”

“I bet it is.” Stephanie took a deep breath. “You are annoyingly good at sex. Go to work and let me somehow deal with the fact that I like having sex with you. Okay?”

Julian had smiled against her skin before he quickly sat up.

Stephanie groaned before she finally sat up and rubbed her eyes. Pissed off Stephanie Appleton was a sight. So was just woken and admitted he was a satisfying lover Stephanie Appleton. She was an all-round vision. “WHAT?”

Julian formed a fist and held it towards her, waiting. She glanced down at it and frowned. Her adorable frown distracted him from the fact that her breasts greeted him this morning.

“Put it there.” He lifted his fist a little higher.

Stephanie’s eyebrows furrowed. “You want me to bump fists with you? Why?”

The smirk on his face had caused her to roll his eyes at him. “You said I’m good at sex. I like to believe I’m awesome at it, but we’ll save that kind of correction for later. You said you also like having sex with me. My ego loves that very much. And for your ego, I’m gonna tell ya that you are ridiculously good in bed. We have to bump fists for great teamwork. I come. You come. We come. What a lovely partnership we have going.”

“Oh, my God! I am never having sex with you again!”

He tilted his chin up at her and then cocked a brow. “What an empty threat. Seriously, put it there. Let’s celebrate what an awesome pair we are.”

Stephanie playfully pushed at his shoulder and got off the bed. “You’re an idiot. I am not bumping fists with you for that. I’m going to find a way to dent that damn ego of yours. You’re going to slip up sometime, Moors. You can’t be that great in bed all the time.” 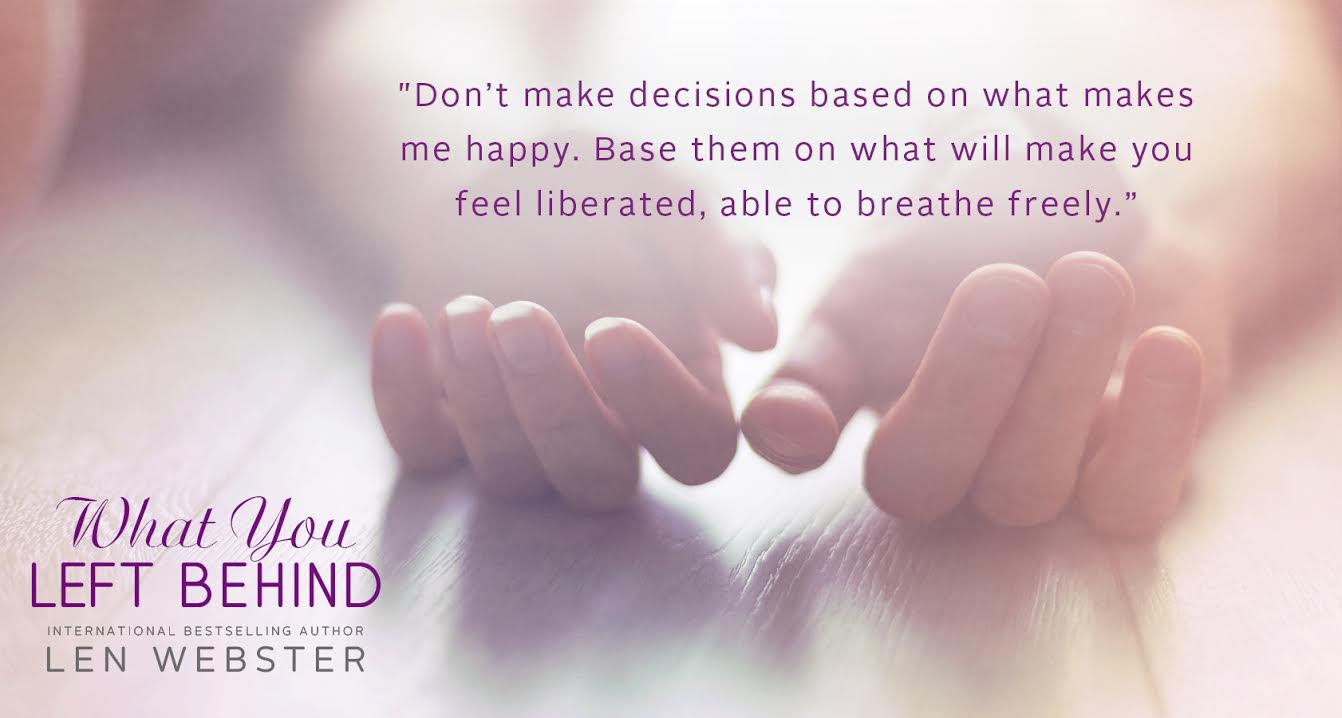 So I will be the first to admit that going into this book, I wasn’t really sure if I would like it or not. Loved the covers, loved the premise, but it seemed more contemporary than I have been reading lately. I’ve been struggling with books that weren’t dark, dirty, or outright erotic. Let me tell you; I was wrong. I have never been so happy to be so wrong. Because what I couldn’t have anticipated, being new to this author, was that her stories are chocked full of the one thing I thrive on; angst. Not only that, but her books have a solid foundation of characters. While this is penned as a spin-off of her Thirty-Eight series, I really feel like it’s just book three in that series. Many events and characters were mentioned that I feel like if I had read the other two books first, I would have had a better picture. Not saying that it hindered the current story to the point I couldn’t follow it, but if I had to do it all over again, I would have read them first. That being said, they have just moved to the top of my TBR as I have already fallen in love with their characters. So be forewarned; I highly suggest you read Thirty-Eight Days and Thirty-Eight Reasons before this book and its prequel, What We’ll Leave Behind.

These characters…WOW! Having already fallen in love with the promise of them on the surface in the prequel, I couldn’t have anticipated the level of depth I would be taken to in this phenomenal story. I have a penchant for series that have a strong character base. Ones where it starts with a main character and all subsequent books build from side characters in the original one. There are roots and bonds that can’t be denied, and while you get a sense of who they are, you can’t wait to read more. And when the author delivers and does it well, it’s magic. This book was that and so much more. I love books that take place in other countries because it reminds me that even though we are different, when you peel back the top layer, we are basically the same and exhibit the same traits of human nature. This book was written in a comfortable prose that was so appeasing to the eyes. It was mixed with humor, longing, heart break, mystery, and finally forgiveness. Even though it’s infuriating to be subjected to chapter after chapter of a character riddled with guilt she clearly doesn’t deserve to feel, it only fuels the angst monster in me. It had me furiously flipping the pages, anxious to see if they would get their act together. Know that they do, but it certainly was no easy road to travel. There will be tears, and not just from the characters, there will be laughter, there will be major swooning, there will be anger, and lastly, there will be an overwhelming love that you will wholeheartedly feel from your head to your toes. You can’t help but fall for these characters; it’s impossible. They share a once in a lifetime love that can’t be denied, yet it was entirely realistic. I give the author major kudos for pulling that off. Though it was quick, this was no typical inst-love folks. It was just simply fate. And fate cannot be denied.

Trust me when I say this story will break you in the best possible way. Stevie is everyone’s best friend, always putting others before her own well-being. She the friend you wish you had in your life, and if you are lucky enough, you do. She’s incredibly talented and feels so deep. She bears scars from her past that she fears will never truly fade, and even in this story, the hits just keep on coming. When it all hits the fan, that will be your tipping point. You will feel her despair so deep in your bones you will truly believe you’ll never see sunlight again. But it is through that that something truly beautiful emerges. She is the personification of there can be no rainbows without a little rain. But whew…that poor girl was hit with a monsoon that just kept pelting her lower and lower. I loved how well these characters meshed together. The two personalities didn’t butt heads too much, they just meshed well. Julian’s nature was headstrong, yet laid back. He was a strong man that wasn’t afraid of what he wanted and the passion he exhibited was blinding to read. And yet he still had a vulnerability that was so completely endearing. He wore his heart on his sleeves and was man enough to display it proudly. With Julian, what you saw it was you got and it was so darn refreshing.

There were many times I wanted to slap one or both of them. Stevie, I wanted to most of the book and I really wanted to throttle Julian at the end. I’ll be honest and say that the way he reacted to something crucial left me thinking I wasn’t sure I’d be able to forgive him. The hurt was that deep. But I also had the full story and he didn’t. So I had to reluctantly cut the man some slack and remind myself of all his other endearing qualities. They say actions are stronger than words, and Julian had the chops to back both up. He was up front from day one about his feelings towards Stevie. Not only was that unexpected, it was refreshing to read. No beating around the bush, no waiting forever for declarations of love. He fell for this girl and he made no qualms about it. While it was the same for Stevie, she was buried under a mountain of self-deprecating grief so deep she couldn’t see her way out. But when all our dominoes fell together, every tear was worth the wait.  My only qualm is that I would have liked an epilogue set further into the future. But I am an epilogue junkie, so that’s my burden to bear. We aren’t done with this series and next up is Stevie’s friend Aly and Julian’s brother Rob, so I am sure we will get more glimpses into the lives of our favorite couple. I for one cannot wait! 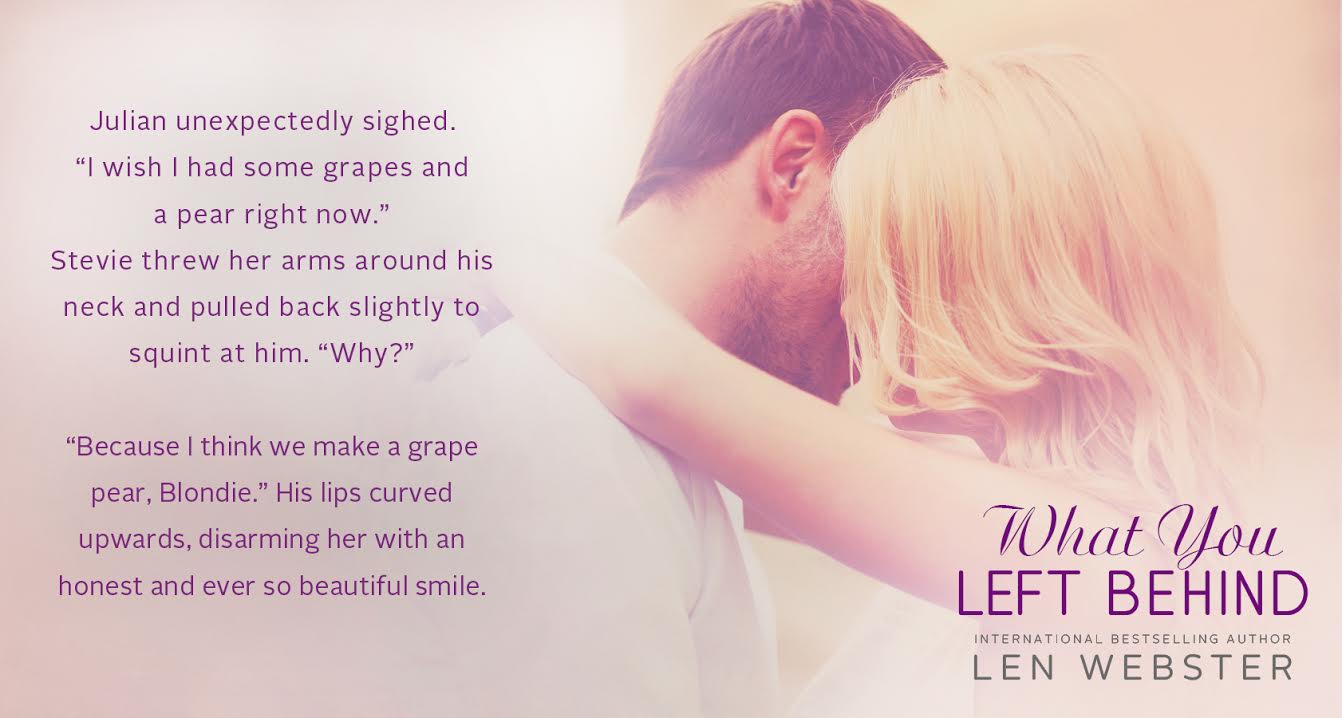 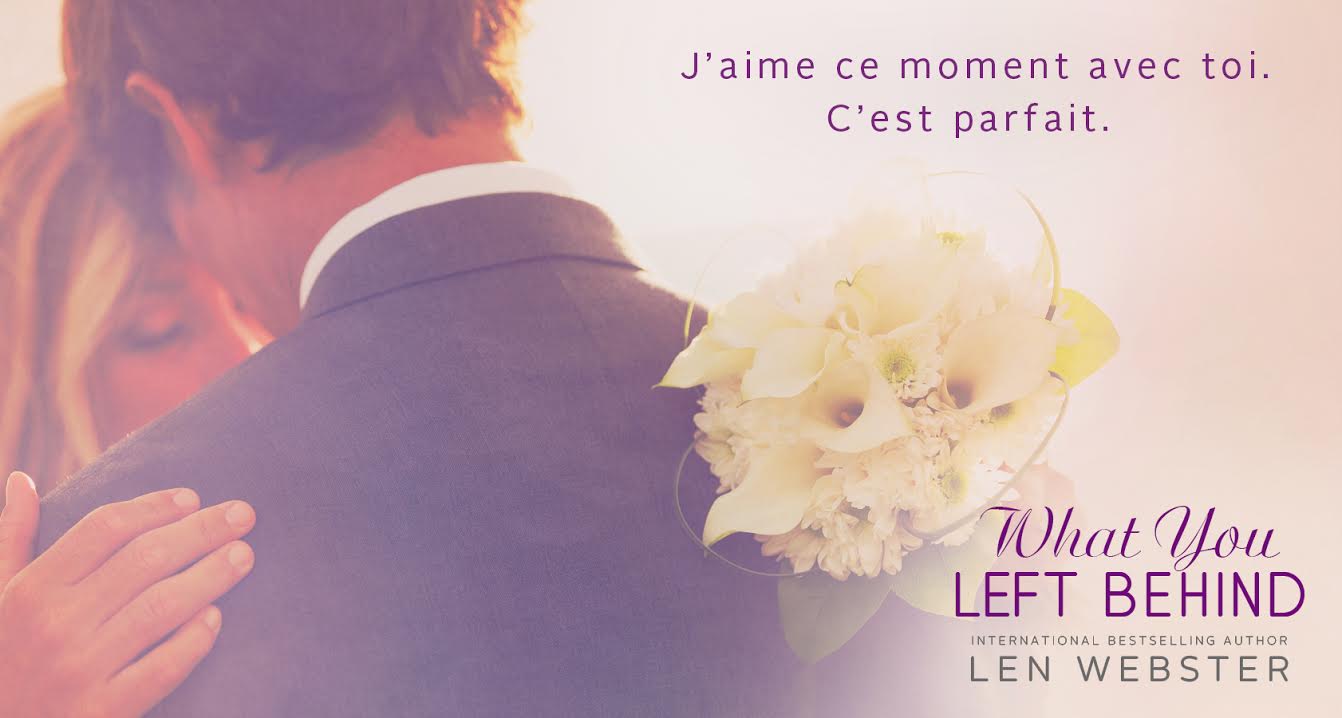 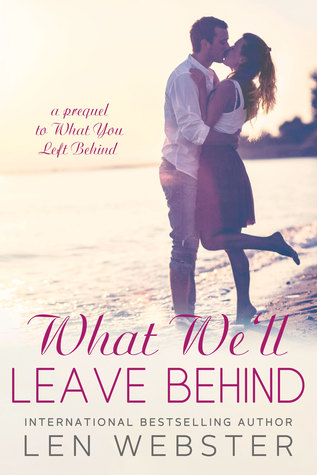