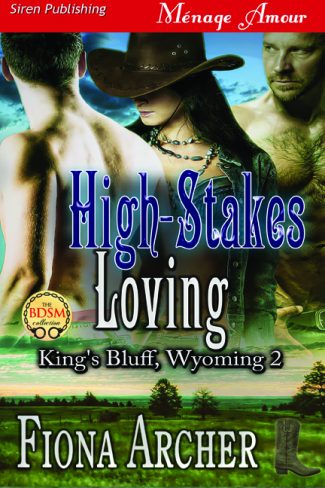 Trapped between two experienced Masters, Reagan surrenders. They're commanding, determined, yet gentle, and everything she ever wanted. Even as she learns what it is to be cherished, a secret from the past emerges, threatening her reputation. She hires her lovers to investigate, expecting them to be on her side. But the damning evidence they uncover rocks their relationship.

As pressure for the truth mounts, danger stalks Reagan. Someone out there believes secrets are best left buried.

Long-held misconceptions and fears stand in their way, risking their futures and allowing the threat closer. The three must fight as one for their love to survive.

Mike pushed the door closed with the kind of unhurried movement that reeked of confidence. He leaned back against the wood, crossing his arms over his chest. Quinn stepped forward, hat in one hand and a black gym bag in the other.

She frowned and glanced up at his face.

“A SEAL always keeps a bag handy. Mike and I have everything we need in here.” He dropped the bag at his feet, followed by his hat.

“Everything?” She guessed he meant more than a clean shirt and deodorant.

“For tonight anyway.” Quinn stalked forward, his body now so close she had to lift her chin high to meet his gaze. “Reality-check time. I’ll ask you again. Do you want this, Reagan? Because we’re not some pansy-ass Ken doll version of Doms.” He caught her wrists and drew them behind her back, holding them there with one hand.

Her pussy throbbed. She tested his hold, wanting, no, needing to struggle. He tightened his grip. Firm. Inescapable.

Quinn used his grip to push her up against him. “You’re caught, sweetness. And that’s just a preview of things to come. We’re gonna order you about, tie you up, eat your pussy till you’re begging us to let you come, say no because that’s the kind of bastards we are, then we’re gonna eat you up all over again.” He lifted his free hand and ran his thumb over her bottom lip. “I want to discover all the ways you light up when we bury our cocks inside that warm heaven between your legs. You’ll come when we say so and not before. Defy us and you’ll be punished. Still interested?”

Her mouth opened but her voice refused to cooperate.

Mike pushed off the door. “We need the words, Reagan.”

Quinn lessened his hold until her hands fell away to her sides. Somehow, the action left her…bereft.

“Here, in the hallway?” They had to be kidding.

Mike’s mouth pressed down in a harsh line. But it was his cold stare washing over her like an icy bath that made her gulp.

She hurried to remove her shirt and tank top. Her fingers struggled to get a grip, as if covered in woolen mittens. Why did the guys have to stand so close?

Dragging the tank top over her head, the easy-fit cotton now impersonated skin-tight spandex, hooking on her elbows until with one hard pull, she managed to lurch free. Sexy, Reagan. With her gaze lowered, she dropped the clothing at her feet.

Thank God for front-closing bras. Her breasts spilled out. Don’t think about all that pale skin. Just hurry. They’re waiting. The white cotton joined the rest of her clothing. After toeing off her sneakers, she pulled her panties down with her jeans.

The cool air wafted over her bare skin. She shivered. There she was, naked in front of Mike and Quinn. And yet, every part of her was alive with a slow burn that kindled from deep between her legs. She moved her gaze from Quinn’s boots to her chest. The hard points of her nipples stood like beacons, screaming her arousal.

Oh, heck, her breasts. She raised her arms.

“Hands by your sides, sugar.” Quinn’s deep voice cut in.

Lowering her hands was like refusing to swim even as the water closed over her head. Her fingers twitched. A tightness filled her belly. Standing there, like a horse on display, seemed so wrong. Shouldn’t she argue back?

“We’re going to push you, Reagan. Well beyond what you’re used to from a partner. In or out of bed.” Mike tilted his head. “Have you been with a Dom before?”

“No.” Only in her dreams. This reality was so much more.

Mike walked behind her.

She forced herself not to swivel around. Look ahead. Chin up.

A line of knuckles brushed against her butt cheek.

She started. Her breasts jiggled.

She dragged her gaze up to Quinn’s face. The heat of his stare made her stomach muscles quiver, as if he’d twirled a feather over her belly button.

“Ever been tied up?” Mike’s hand curved over her hip.

“No.” Her face heated. It seemed so foreign and carnal, talking about bondage in such a matter-of-fact way.

“N-no.” She coughed past the shag pile carpet coating her throat. “I haven’t done anything, besides, you know, normal stuff.” Two lovers at college and an ex-boyfriend in Sheridan. All missionary men, and she wasn’t talking bibles.

This time Quinn chuckled. “We’re gonna open up a whole new world for you, sweetheart.” 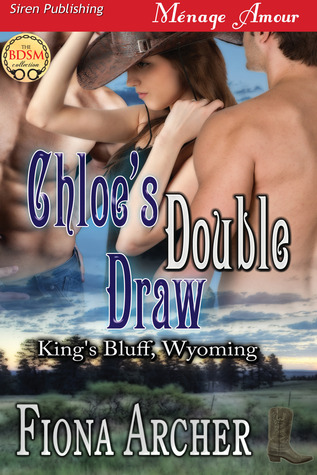 Chloe Morgan fled to King’s Bluff, Wyoming, to start a new life. With a past that haunts her, the shy schoolteacher must make a choice. She can hide away and protect her secrets or embrace the acceptance of the small community.

Noah King and Flynn Taylor have traveled the world as members of Australia’s elite SAS. They’ve earned scars, both inside and out. Now powerful influencers in King’s Bluff, a town founded by Noah’s ancestors, the men have made a haven from the ranch Noah inherited.

As the two Doms fight to gain her trust, Chloe’s past crashes in on them, threatening their futures. When a man obsessed with her tracks down his prey, nobody could have imagined how high the stakes would go.

I live in the sunny environs of Sydney, Australia, and share a house with my dog, Letty. Oh, and the flock of cockatoos that take over the back yard each afternoon, demanding their feed of Arnott’s Milk Arrowroot Biscuits. Things get a little noisy around 3.00pm in our household.

My love of romance started back when I was twelve and my mum’s stash of Mills and Boon novels proved too much of a temptation. At fifteen, I decided the life of a romance writer was for me. Some…ah…years later, I’ve clawed together enough gumption to make my dream a reality.

When not sitting in front of the computer, I can be found in the garden or enthralled watching a murder mystery DVD. I limit myself to reading other authors’ work between writing my own stories. Books are my ‘shiny’ distractions.