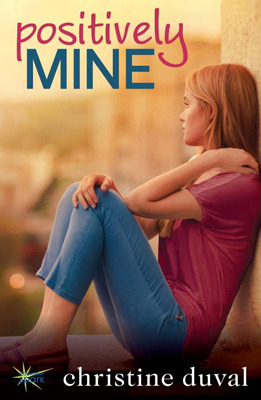 It is four weeks into her freshman year of college, and Laurel’s first test was unexpected. Discovering she’s pregnant isn’t exactly what she had planned for her first semester, and while she intends to tell her emotionally-distant father, being away at school makes it all too easy to hide.

An imperfect heroine plagued by bad choices and isolated during what should be the best time of her life, readers are sure to identify with Laurel as she confronts teen pregnancy, in secret.

Raquel wrote: “Hey Christine! I’m curious about where you got your inspiration for the idea behind Positively Mine? It was unlike any book I’ve read, in a refreshing way!”

A couple years ago my dearest friend announced she was pregnant and at the same time my babysitter was going off to her freshman year of college. I don’t know why but I started thinking, wow, if you were newly pregnant and heading away to college, you really could hide it from people back home (I know I have a weird brain). I’ve had 2 kids, so I know how the weight comes on and realized Laurel could easily hide it through Thanksgiving and Christmas. Then I just let Laurel tell me her story.

Caryn wrote: “Hi Christine, I really enjoyed Positively Mine.  How did you weave together elements of fiction with such a strong sense of place that was based on a specific area of upstate?”

Easy…I lived up in the Finger Lakes for 4 years. It is a beautiful place when the sun is shining but there are a ton of dark, grey, cold days. You live for the sunny ones but honestly, when I was there in college, my mom received more than her share of phone calls from me begging to come home just to see the sun. Ultimately, the good friends I made kept me planted but it is a long, hard winter (thus easy to hide behind a big coat).

Holly wrote: “Hi Christine! Really enjoyed Positively Mine! What is your writing process? Do you find you write better at certain times of the day or do you run to the computer when inspired? Also, how did you connect with your publisher?”

Hi Holly,
I am the most undisciplined writer that ever lived! I have no process. I drive a lot in my car and let the story unfold in my head and then go back home and recreate it when I have time. Still, that usually backfires because at that point my characters have changed their minds and all of a sudden I am writing a completely different story. A prime example of this is in Positively Mine. I never meant for Sheryl to end up pregnant. It happened as shocking for me as it was for Laurel! Seriously, I was writing and all of sudden she just cleared the room and announced it. I had no plan of this, no outline. Regarding Bloomsbury, I saw on NA Alley – a blog I follow – that they were starting Bloomsbury Spark and I sent an inquiry to Meredith Rich and a few months later the rest is history!

Beatriz wrote: “Hi Christine, I really enjoyed reading your book. Congratulations! Are you working on a sequel? If so when can we expect it by 🙂 I would like to know how long did it take you to complete your book?”

Thanks so much Beatriz! I am working on the sequel and hopefully will have it complete this winter, after Positively Mine is released. I wrote the first draft two years ago during a NANOWRIMO competition (National Novel Writing Month), where you are challenged to write 50,000 words in 30 days. Then I put it away for December, picked it back up in January and had it complete to enter into the Amazon Breakthrough Novel Contest around the third week of that month. But it has evolved quite a bit since that version thanks to a bunch of beta readers and a really good critique group who demanded more of my characters and more from the plot.

I’d recommend doing NANOWRIMO if you are just starting out writing your first novel. It really is an inspiring month and around the clock, through Twitter, there is someone in the world working on their novel. I remember I used to do word sprints in the middle of the night with a girl in South Africa. We’d turn on the timer and race write for ten minutes then compare how many words we wrote. With NANOWRIMO, it is all about quantity, not quality. You push yourself to write as much as you can and amazingly by doing that, you let your guard down and really surprise yourself with what you come up with. Plus, it forces you to look at your novel every day so it is always with you, you are always thinking about your characters. And, there’s one right around the corner since it is an annual event. Best of luck with your project!

Sherry wrote: “One of the things that struck me about your book is the very strong and distinct voice of Laurel. She feels very real. Is she based on anyone, or a group of people, you know?”

She really isn’t based on any one person or even a group of people. Some of the situations she finds herself in are based on real things. Not the pregnancy but the premature death of her mom, the places, the struggle to move on while her dad is building a new life with someone. I don’t think there is one person out there who hasn’t witnessed, whether first hand or via a good friend, someone who needs to accept a parent’s new husband or wife. And the gossipy doorman…yeah.

I think the choice to write the book in first person, present tense helped to strengthen Laurel’s voice. It isn’t an easy way to write because everything is happening to your character while you are writing it. I was very influenced by two books when I set out to create this story: Laurie Halse Anderson’s “Speak” and Julie Buxbaum’s “The Opposite of Love.” I loved how Laurie was able to keep Melinda quiet the whole year in a believable way when she had such a big secret to tell. And, I love the way Julie balances strong emotion and humor as her main character Emily is forced to face her fears.

Christine Duval is an author and freelance writer who lives in New Jersey with her guitar-playing husband and two children. She is a member of the Society of Children’s Book Writers and Illustrators, New Jersey’s Women Who Write, and the Authors Guild. When not creating fictional characters, she writes for an upscale real estate company and has overseen online content and social media for several well-known magazines.