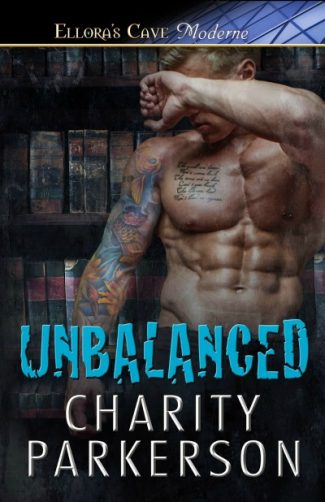 Using unmatched skill and intelligence, Kurt captures the attention of every partner he desires. His ability to confuse his prey keeps them captivated. This trick has never failed him. That is, until he meets McKenna. As an author, McKenna has gone to great lengths to ensure the details of her erotic books are airtight. When Kurt challenges one of her scenes, she doesn’t hesitate to take up his offer to prove his theory. The bad boy MMA fighter appeals to her on every level. Kurt’s intelligence stimulates her mind even as his touch sets her body on fire. In spite of those things, McKenna has no intention of adding her name to his list of ex-lovers.
McKenna’s odd behavior exasperates Kurt. She is an addiction he cannot shake. But somehow the two of them make the combination of his OCD logic and her unbalanced nature work.

Inside Scoop: There are a couple hot but brief male/male encounters as well as a handcuff scene that may have you reaching for the fan. 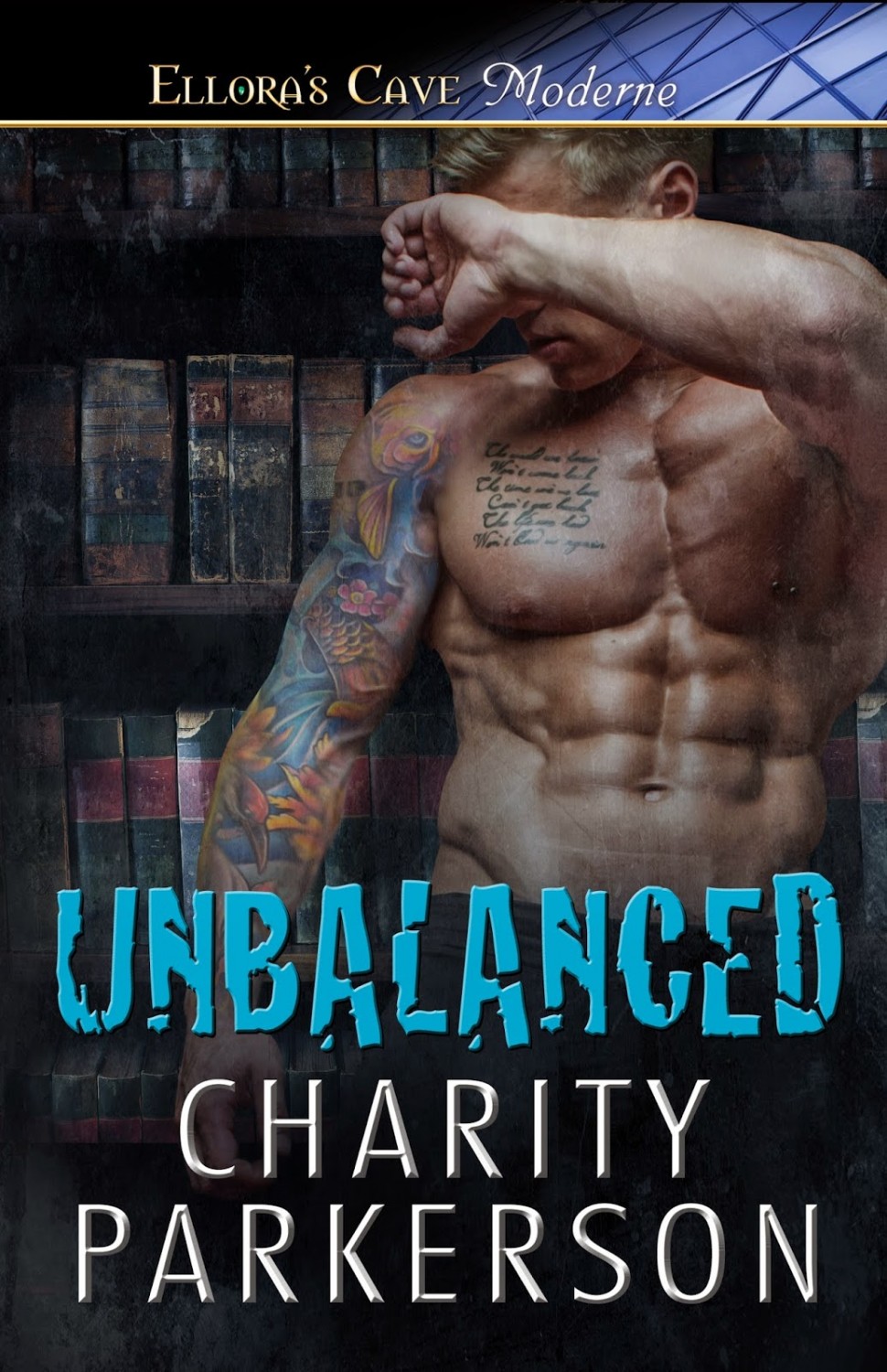 She wasn’t wearing shoes. Funnily enough, it was the first detail about her that caught his eye. At a table, in public, Kurt found her shoeless state odd. There were a thousand tiny things about her he should have noticed first. Without a doubt, her plain black t-shirt, yoga pants and the overall lack of effort toward her appearance allowed her to blend into the background. It shouldn’t have mattered. Kurt wasn’t usually so blind. None of those points stole an ounce of power from her beauty. There wasn’t a hint of makeup marring her face. Blonde curls piled on her head held in place by some sort of clip. Something about her eyes held him captivated. They were unfocused as they moved across the pages of the book she held between her hands. In spite of that, he felt sure she absorbed every word, only on a different plane than others would.

He moved closer. The lack of footwear became an obsession. Curiosity ate at him. He needed to know why. The coffee shop located inside a G. Richards’ Bookstore had a sign posted clearly on the front door. “No shoes. No service.” Once Kurt managed to snag the chair directly across from her, he bent at the waist. Under the guise of dropping a napkin, he peered under the edge of her table. Suspicions confirmed. His brows drew together in a frown as he sat up.

After a moment of staring at the corner, he couldn’t stand it any longer.

“Your feet are bare.”

Lifting her gaze from the book between her hands, she blinked several times. He could practically see her dragging her mind away from whatever cloud it was on.

“Your feet,” he repeated. “They have no shoes on them.”

“Oh. I’d forgotten.” She immediately dismissed him by returning to her reading.

“You’re inside a business. They serve food.”

She didn’t bother glancing his way as she responded.

“If that bothers you, I won’t mention the state of my underwear.”

He had to know. “Did you forget those, as well?”

That got her attention. A line formed between her eyes as if his question was too stupid for her to fathom.

“How does someone forget their underwear?”

“How does a person forget their shoes?” He shot back.

Tilting her head to one side, she seemed to think it over for a moment before responding. “Is this a trick question?”

Kurt scoffed as he reminded her of the obvious. “You’re not wearing them.”

Her mouth turned up in one corner in such a way his gaze immediately shot to her lips. “I’m aware.”

Unable to keep the exasperation from his voice, Kurt sighed. “You said you’d forgotten your shoes. It stands to reason then, you would know how one goes about it.”

Setting her book aside, she nodded slowly as if giving his theory due consideration. “Your logic is sound,” she admitted after a moment. Finally, they were getting somewhere. She immediately ruined it by adding, “Except, I said no such thing. Therefore, I cannot help you.”

There was a moment where he had nothing. He couldn’t recall a single incident where anyone had caused his mind to go blank. His brain was always on the move, slightly dissatisfied with his lot. She’d wiped him clean. Her blue eyes focused on him fully as if awaiting his next move. When he wasn’t quick enough, she released a heavy sigh.

“If you must know, when I got here I realized I had on two different colored shoes so I took them off.”

Without waiting to see his reaction, she flipped her book up between them, shutting him out. A part of him wanted to laugh at her confession. He was too fascinated. Not to mention, with his curiosity assuaged he really wanted to hear more about the rest.

“What about your underwear?”

She ignored him. He bit back a smile. His mind whirled back to life and he searched for a new way to insert himself into her company. Tilting his head, he read the title blocking her eyes from his gaze. The Ins and Outs of BDSM. Catchy title. Switching his gaze to the other items scattered across her table, he took note of another book on bondage as well as some handwritten notes. As far as he could tell by what she’d scratched out, she was either intent on rocking some dude’s world or plotting one hell of a murder.

He braced his elbows on the table, lowering his voice where only she could hear. “I have handcuffs back at my place.”

She set the book aside. Mimicking his pose, her eyes shone with mirth as she pitched her voice low, as well. “I have a Taser in my handbag.”

Holding back his laughter, Kurt didn’t miss a beat. “Kinky,” he said, adding a wink. “I like it.”

Snorting, she slapped her hand over her mouth and nose as if she couldn’t believe what she’d done.

“I’m Kurt,” he offered before she could escape into her mind again. 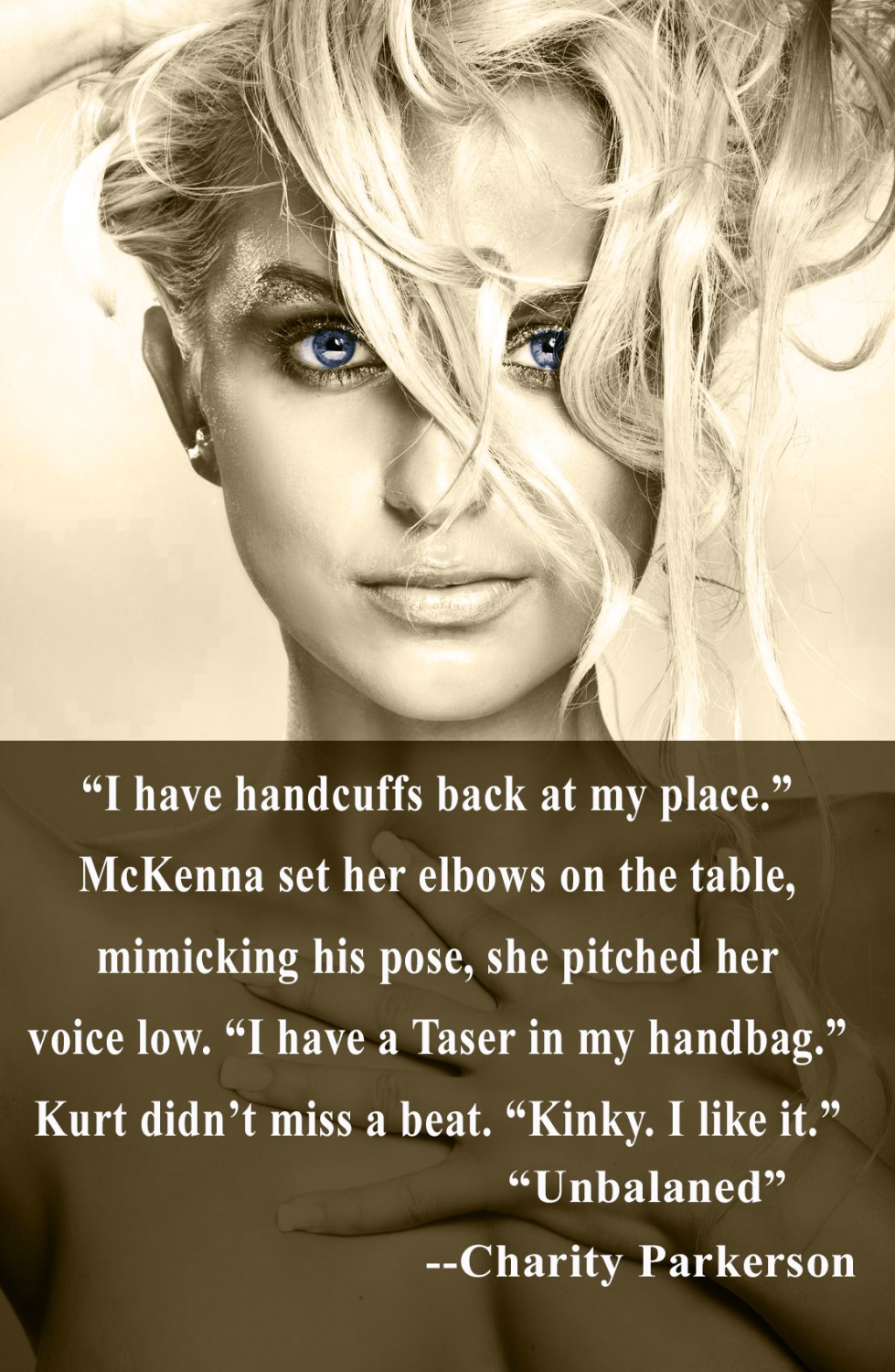 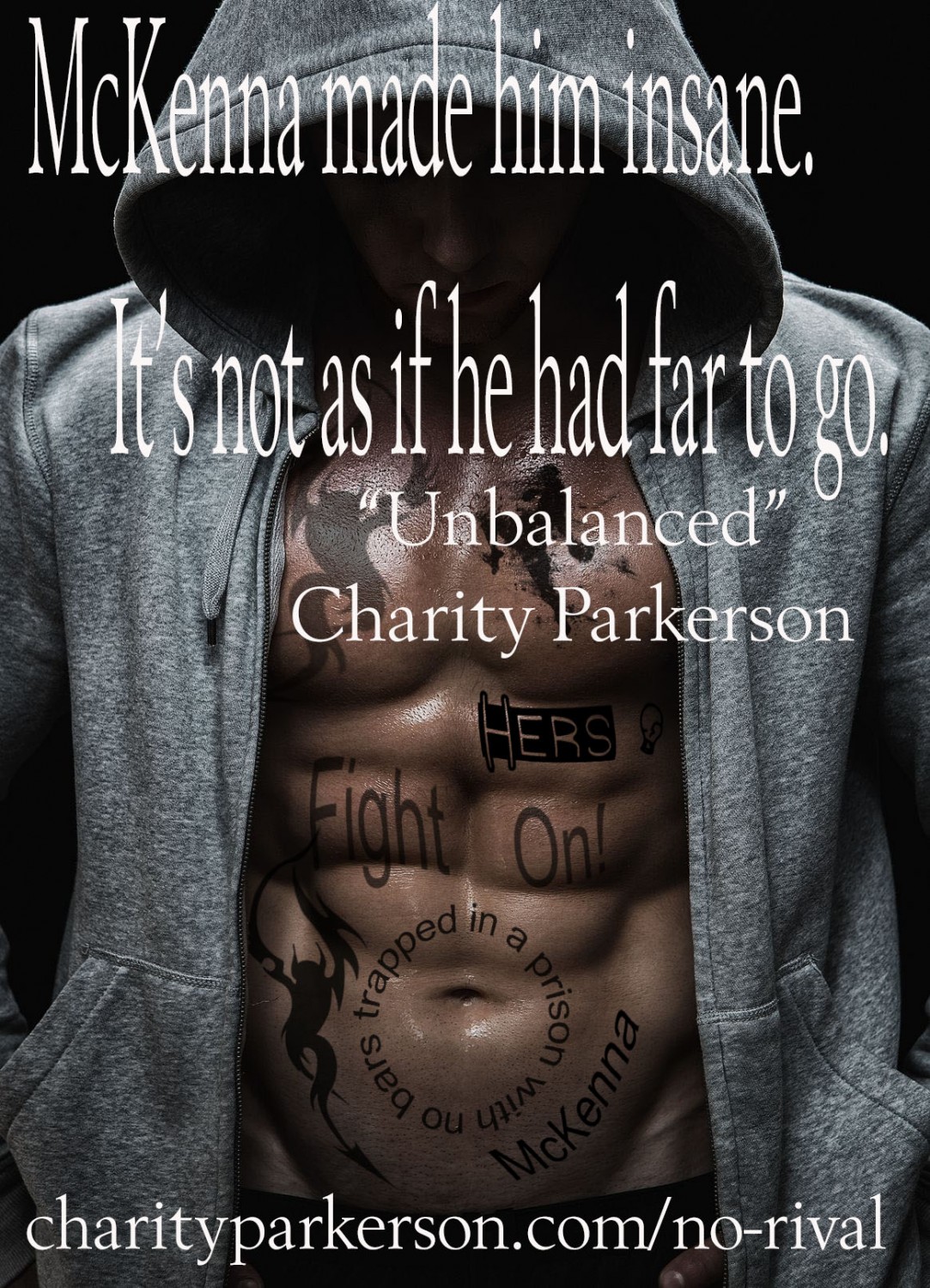 Charity Parkerson is an award winning and multi-published author with Ellora’s Cave Publishing, Midnight Books, and Punk & Sissy Publications. Born with no filter from her brain to her mouth, she decided to take this odd quirk and insert it in her characters.

*Five-time winner of The Mistress of the Darkpath

2 responses to “Book Blitz: Unbalanced (No Rival #4) by Charity Parkerson”