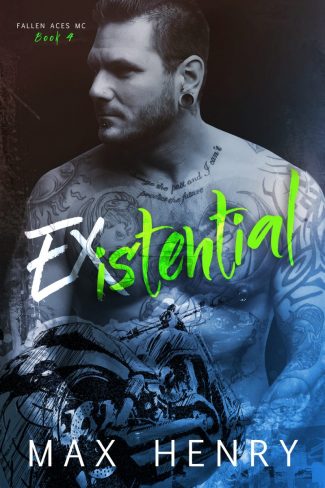 How much suffering can a man withstand before he finally breaks? A question I used to ask myself often. Now I know the answer.

As president of the Fallen Aces MC Fort Worth chapter, I’m looked to for guidance in times of crisis. I’m expected to set personal grievances aside and lead by example. Yet how can I do that when those grievances robbed me of my family, my life? My reason to be at the head of the table?

My father: murdered. My baby sister: killed the same day. And my other sister? A mystery. I’m drowning in my desolation and yet nobody seems to care. Or maybe it’s the fact I won’t let them close enough to help? Either way, my losses are my own, and I’ll deal with them the only way I know how—by punishing myself.

I’ve got it all figured out, at least, I thought I did. Until one woman, a traveler passing by, unravels the master plan. I see it in her eyes, the same distance, the same feeling that she doesn’t belong—that her time here is wasted.

One woman who mirrors me in every way, and suddenly I find a reason to hold off the reaper a little longer. A reason to stay at the head of the table. A reason to show those who’ve hurt me that, although they brought the beast to its knees, I won’t lay down to die without a fight.

Existential is book number four in the Fallen Aces MC series, but can be read as a standalone. 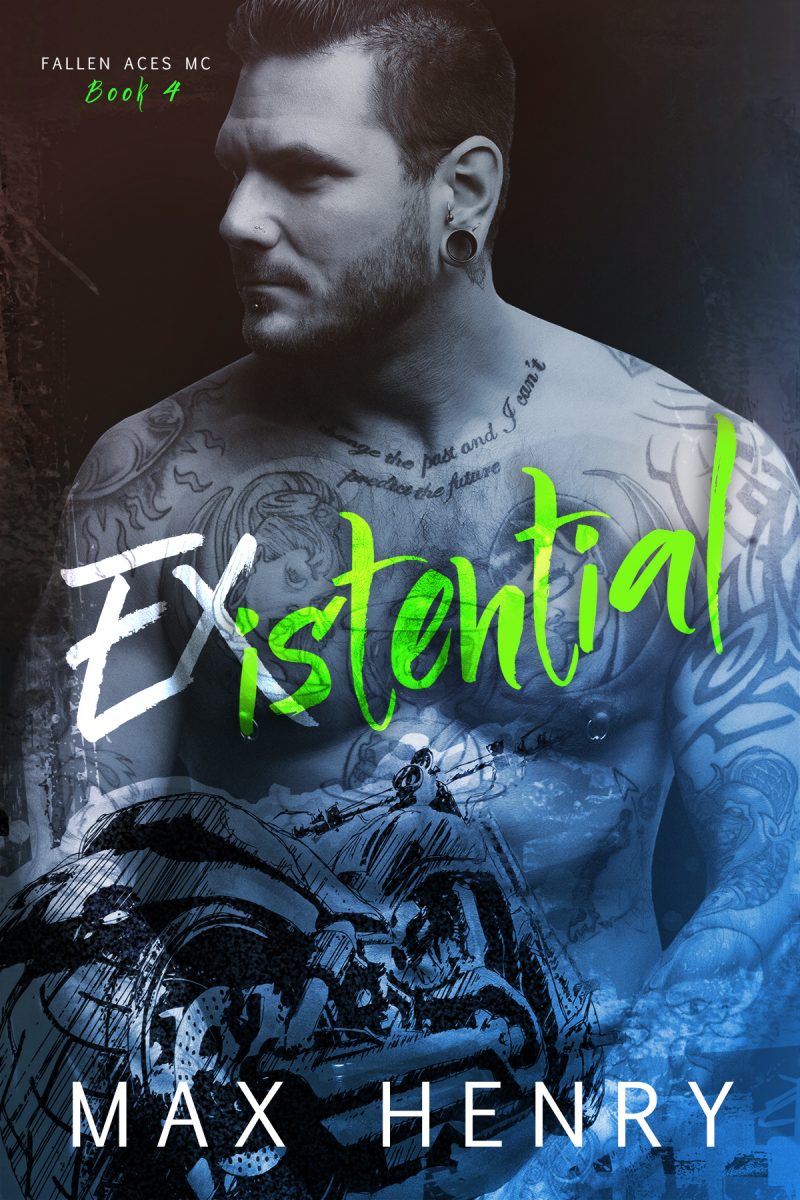 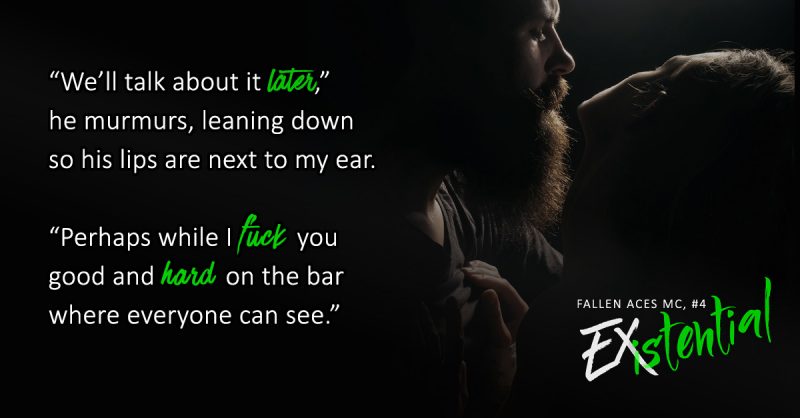 He reaches out and threads his fingers under mine, bringing our joined hands between us on the floor. “Do you think it’s weak if a man admits his fears?”

I frown, squeezing his hand tight. “No.” Why would he even think that? “I think it’s honorable. It takes so much bravery to admit you have faults.”

“I know.” After all, aren’t I the authority on keeping faults a secret?

He sniffs, staring at the toes of his boots where they rest against the base of the washer. “Since everything went to shit last year, I get… I guess the only way to describe it is angry at myself.”

“What for? Do you blame yourself for what happened?”

His head drops back again, and he closes his eyes as his thumb traces a path on the back of my hand. “Yeah, but I know I shouldn’t. Still, knowin’ what I’m thinkin’ is wrong doesn’t make it go away. I still blame myself for everything, still hate myself for it.”

“That’s natural, though. You went through something traumatic, from what you’ve said of it, so you’ve got strong reactions that need a place to rest.”

“I went on a bender after they died,” he explains, opening his eyes to stare at the ceiling. “Drank, binged on coke, picked fights with my friends, and it wasn’t until I couldn’t remember what it was like to be straight that I finally realized why I did it.”

A lump lodges in my throat as I take him in. At face value he’s strength and dominance. He’s a huge guy, intimidating to those who don’t know him, with his black clothing, leather, and piercings. He puts out an image of power, over others, and himself. But underneath it all he hides this.

“Why?” He rolls his head to look me in the eye. “It’s the truth, Dagne. I don’t want to do this anymore. Every day is hard. I wake up wishin’ it was time to go to sleep again, dreadin’ the day before it’s even happened.” His face moves through frustration and anger, glimpses of pain and despair between. “You have any idea what it’s like to just want to curl up in a ball and pretend the world doesn’t exist?”

“Yeah, I do,” I say. “I also know what it’s like to want to die. To know you’re too gutless to do it yourself, so you wish for something that’ll do it for you, like an illness, an accident, or a masochistic fucking father who hates the fact you breathe the same air as him.” Hooch’s eyes go wide, and I realize in that moment tears streak my cheeks. But fuck it—he needs to hear it. “I also know what it’s like to be hurt so bad that you finally believe that day has come, and in that second your foolishness and selfish thoughts come back to haunt you. What it’s like to realize when you’re faced with your own mortality that you don’t want to die … you just wish you were someone else, living another life.”

A small smile plays at the corner of his lips, and he reaches out to wipe my tears. “Carry on.”

“What you have to face is that you have the power to be somebody else. Fuck what your head tells you, Hooch. Your mind is a goddamn liar. It feeds off your fear, shows you your flaws while hiding your strengths. If you’re not happy,” I say, jabbing him in the chest, “change it. Do something about it. But don’t quit.”

“I’ve tried.” He captures my hand, focusing on the flesh of my palm as he traces the lines with his finger. “I really have, but my battery’s run dry, girl.” 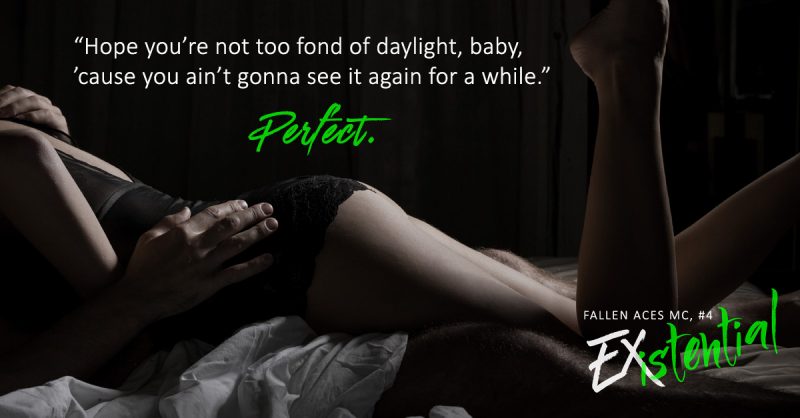 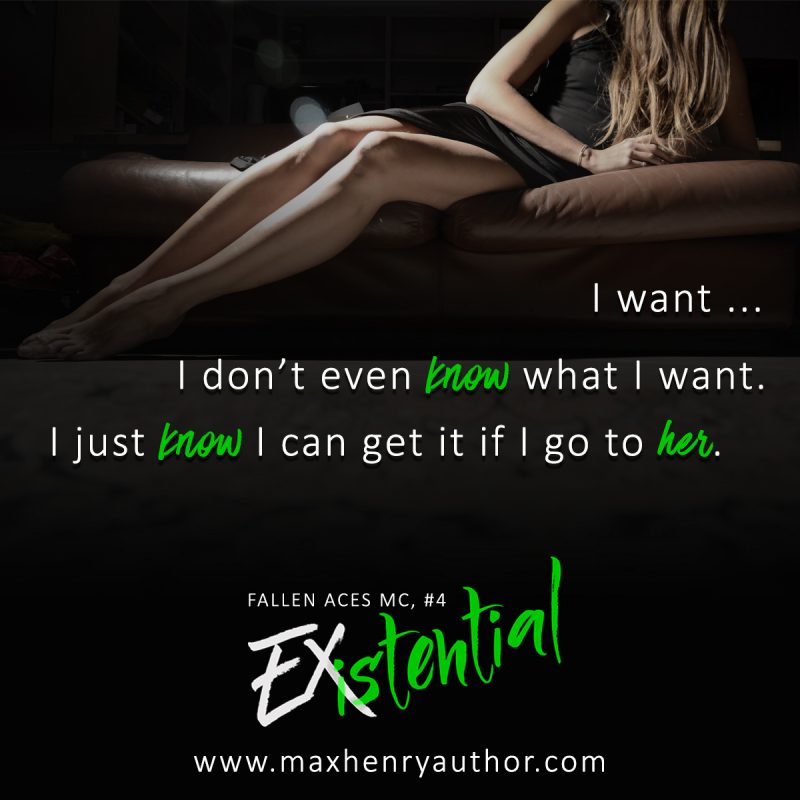 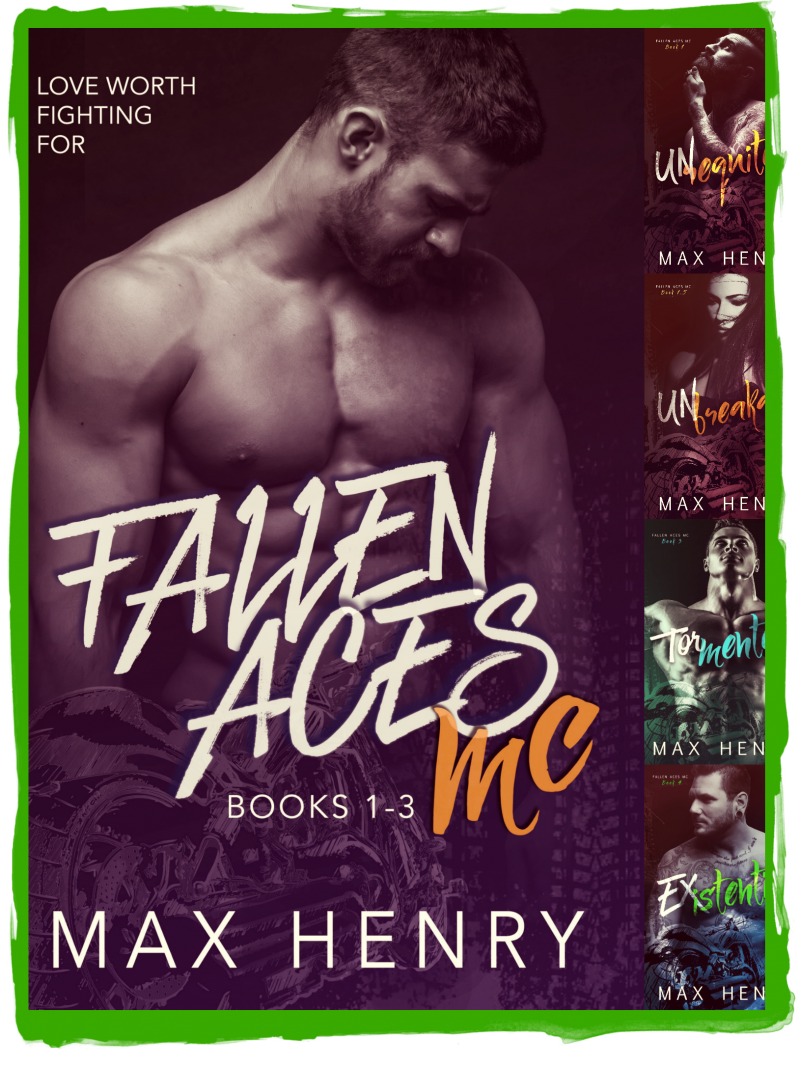 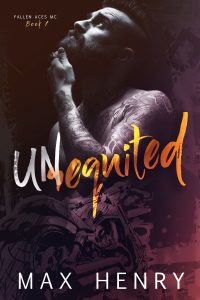 Our love was all consuming, passionate, and forbidden. We took risks to be together, carrying on an affair for months before her psychotic drug lord husband found the truth behind the lies. She barely escaped with her life… and that of my son.

Six years and a promotion to club president later, it’s time the lies stopped. She IS worth the risk, I’ve NEVER gone a day without thinking about her OR my son, and I know underneath it all she DOES still love me. She just won’t admit it… yet. 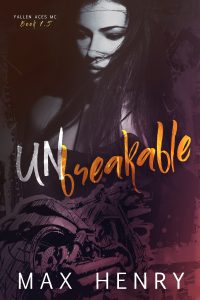 This time, she’ll come home for good… she just doesn’t know it yet. 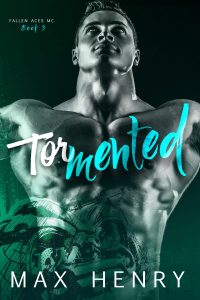 Sometimes I feel as though I was a glitch in life’s major plan, that I never had a place set aside for me in this world.

I’m an outcast by design. Bent in the head after childhood trauma, and never quite sure who I’m going to be day to day.

Or some happy medium of the two?

People stay away for fear of what I can do, and I don’t blame them. After all, I have no conscience, no remorse, and no guilt for the horrific things I’ve done; the reasons why I’m the Fallen Aces MC’s best asset when it comes to retribution and punishment.

I deliver, without hesitation, and without doubt.

Until Abbey. One kiss, one taste, and I question everything.

What can I offer her?

She’s wild, unsociable, and guards her heart with the tenacity of a lioness.

I want to tame her. Break her spirit and make her mine.

I want to ruin her.

The very reasons why she has to go. 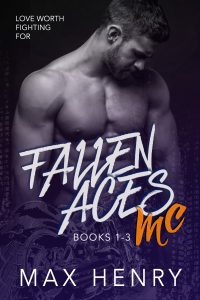 Catch up on the first 3 full-length books in the anticipated Fallen Aces MC series before the fourth novel, Existential, releases April 18. More than ten hours of heart stopping, addictive twists and turns.

A club burdened by the debt of its forefathers.

Founded on the basic principles of loyalty and honor, the Fallen Aces MC was created to be a home for the destitute and weary, a place for those who didn’t feel welcome in society to find a sense of family. Yet, over time, morals are lost, lines are blurred, and only when chaos rains down on the life they’ve built, will the second generation members realize the time for change starts now—with them.

Outlaw men who must right the wrongs of their predecessors in order to survive.

Their women, challenged to keep balance and order in a dangerous and unpredictable world.

When the devil lives outside your door, can there be room for love? Or will the trials of a life lived on the knife’s edge be too much for the heart to overcome?

In a world of broken trust, dirty paybacks, and the desperate fight for survival, only one thing is for sure…

“I want your jagged edges to match mine. I want to combine our dark and ugly hearts into something unbreakable.” 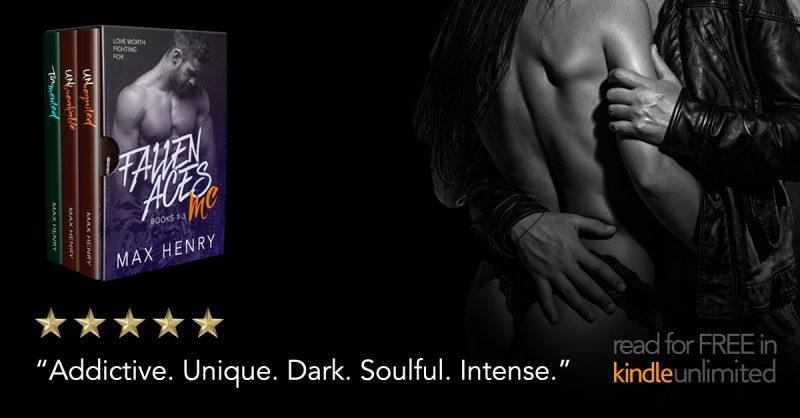 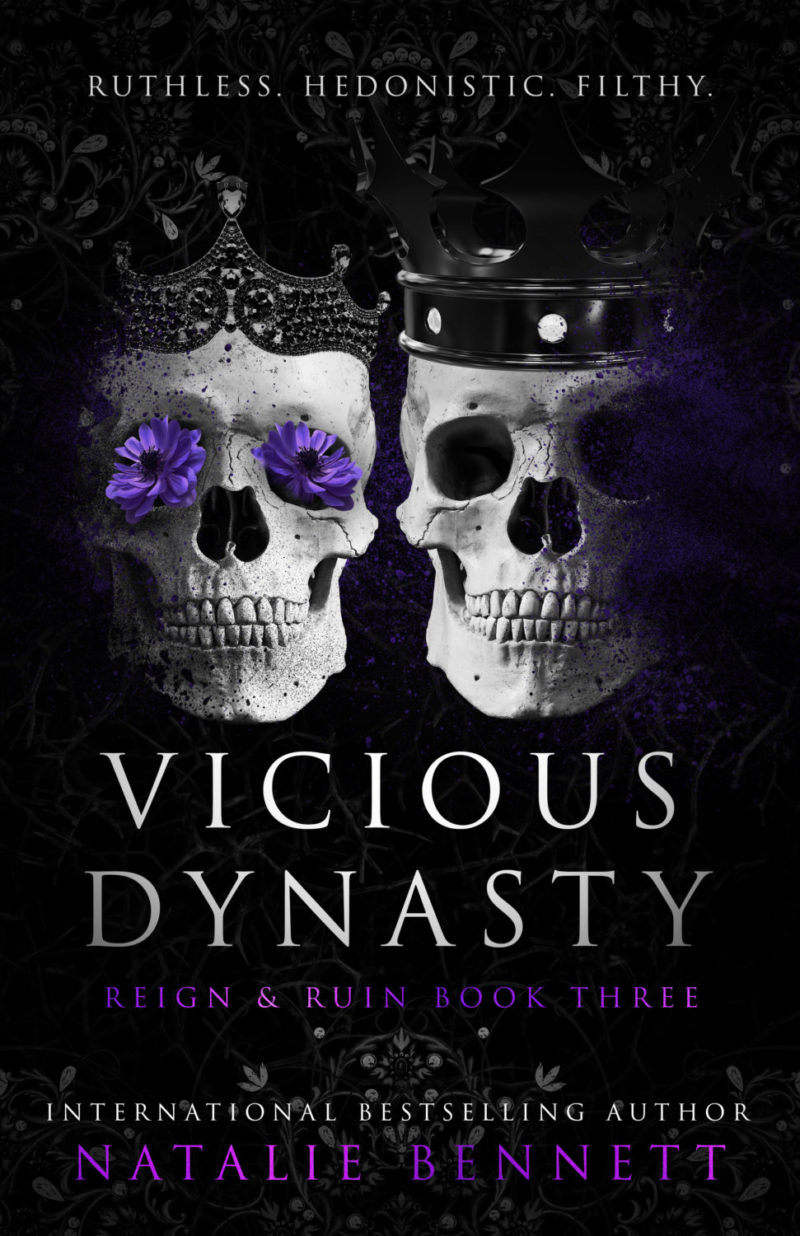