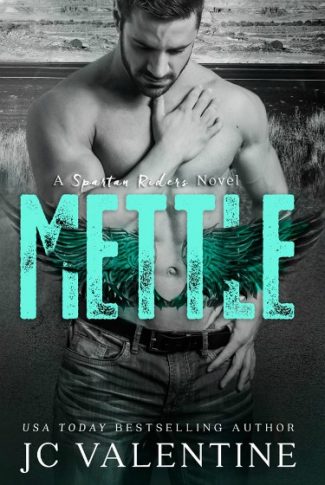 Talia McKinnon said goodbye to love the day she signed the divorce papers and moved across the country looking for a fresh start. With work occupying her days and nights, a relationship is the last thing on her mind, until a run-in with a hot-as-Hades, leather clad biker changes her mind. He’s everything she shouldn’t want but has to have. The problem is, he’s not that easy to catch.

Tucker “Country” Abrams believes in two things: brotherhood and women. He takes his job seriously and his women hard, but at the end of the day, the only loyalty he has is to his club. So when a night with a beautiful stranger threatens to change everything, he’s quick to apply the brakes. But when a little detective work reveals that Talia may be much more than a one-night stand, Tucker is tasked with an impossible decision. Will he push her away, or go against every instinct he has and pull her closer?

Shoving aside the empty, Tucker ordered a coffee, black, then sat back and waiting for it to arrive. No sooner than he’d lifted his iPhone from his pocket, preparing to scroll through his Little Black Book of fine ass bunnies who were always DTF, the seat next to him became occupied.

“Shame, a man drinking alone on a Friday night.”

Holy fucking hell. Her voice was pure phone sex operator. His dick swelled instantly, and Tucker shifted in his seat, his lips curling into a slow smile as he turned to face her head-on. “Nothin’ wrong with a man drinkin’ alone, sugar. Now, you on the other hand…” He made a show of eying every inch of her svelte frame. She was well-covered in a pair of tight black pants and black halter top laced with fringe, and even though he’d heard that black was supposed to give that slimming effect, he could tell the thickness of her thighs wasn’t just because she was short. The woman worked out.

Mmmm. Thick, solid thighs. She was sitting, so he couldn’t tell for sure, but Tucker would bet his left nut that she had an ass to match.

She gave him the same once-over, lingering on the bulge along his inner thigh. A bold one, she was. Her tawny eyes rose up and met his, the corner of her mouth and a single eyebrow lifted in amusement. Or perhaps that was appreciation…

“Your date stand you up?” she asked, lifting her chin toward the phone he still held in his hand.

Tucker looked down at the thing, surprised. Forgot he even had it out. A list of numbers identified by nicknames like Double Mint Twins and Freak Nasty stared back at him, and suddenly, the need for a quickie had lost its appeal.

Putting the phone away, Tucker leaned forward, folding his arms on the bar, and stared into the woman’s amazing eyes. “Looks that way. Broke my heart.” He pouted a bit, pure show, and she knew it.

“Bitch.” A smirk played on her perfectly formed rose-petal lips. She leaned a little. “Just so you know, I’d never break your heart. Now, other things…” She left that one dangling, sparking Tucker’s intrigue.

“Other things…” Lifting his hand, Tucker slid the pad of his thumb across his bottom lip, appraising her once more. “You know, I would not be opposed to see what kind of ‘things’ you have in mind.”

She chuckled, a soft, delicate sound, just like everything else about her. “I don’t know if you could handle the kind of things I’m thinking.”

Tucker’s eyes narrowed and, deciding to match her boldness, he said, “I can handle whatever you want to throw at me, sugar. I should warn you, though. It’s you who might not be able to handle me…” With a start, he realized he hadn’t caught her name.

Reading his expression and extending a delicate, fine-boned hand, she said, “Talia. And I assure you, it’s the other way around.”

And wasn’t that exactly what he wanted to hear. Grasping her hand firmly, Tucker held onto it far longer than was necessary. “My friends call me Country, but you…” He rubbed his thumb across the soft skin on the back of her hand, then lifted it to his lips, kissing baby soft knuckles that smelled faintly of apple blossoms. “You can call me Tuck.”

She grinned, not understanding the significance of him allowing her to call him by his real name. No woman had ever known him as anything but Country, but her…There was something about this one that made him want to lose the filter. Get a little closer.

Her eyes sparkled at his seductive purr, and Tucker did a mental fist pump. Hook. Line. Sinker. 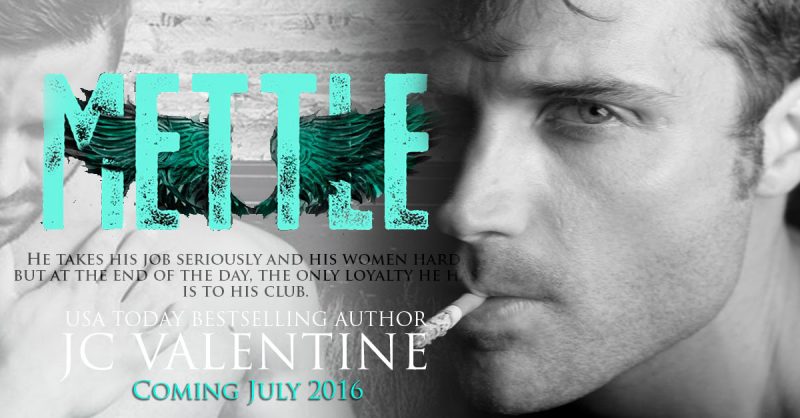 Gabby Morgan isn’t looking for love. Not even a little romance. Following a rocky past that she’d just as soon forget, she’s determined to focus on the future. One that most certainly doesn’t involve the tough-as-nails, short-on-words, hot-as-hell biker…or his kid.

Blake Mahone may not be done with women, but he’s finished with relationships. Then Gabby Morgan enters the picture. She’s flawless, refined, and as his kid’s teacher, way out of his league. She acts like she hates him, but her eyes tell a different story. Before he knows it, Blake finds himself hot for teacher, and he’s more than ready to learn all her secrets. Now all he has to do is convince her to give him a shot…without getting them both killed in the process.

USA Today Bestselling author J.C. Valentine is the alter-ego of Brandi Salazar, whose enjoyment of tales of romance spurred her to branch out and create her own.

She lives in the Northwest with her husband, their wild children, and far too many pets. As a university student, she studies literature, which goes well with her dream of becoming an editor. Brandi entertains a number of hobbies including reading and photography, but her first love is writing fiction-in all its forms.