I am very excited to share with you the amazing cover for Emily Minton and Dawn Martens’ newest book, Renegade Reject (Renegade Sons MC #2), which is  releasing May 13th! 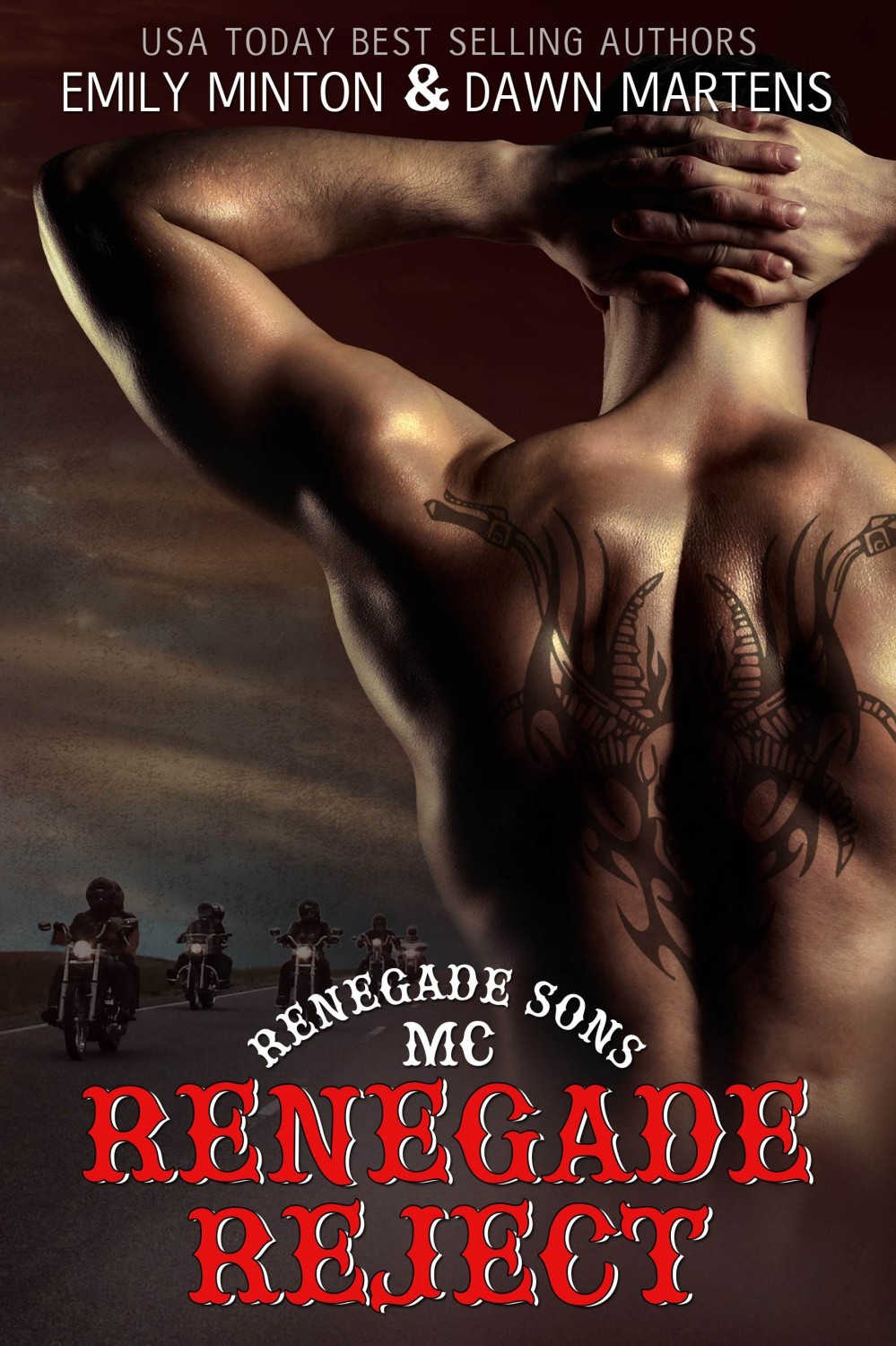 Daisy “Little Flower” Anderson has lived her entire life on the sidelines of the Renegade Sons MC. Her father is a member, and her mother a club whore turned old lady. Not wanting to follow their footsteps, she chose a different path; one that keeps her close to the biker family she loves, but out of the club.

Struggling to keep it together, she never thought she would have anything of her own, until she met Preach. He is everything she swore she didn’t want in life. One night of passion leads to unexpected consequences, and she knows, now more than ever, it’s time to move forward.

Garrett “Preach” Austin lived his life caught in his father’s iron fist. He never thought he would want anything more than freedom from his past, until he met his “Little Flower”. She shows him there is more to life than pain.

Preach has a secret; one that forces him to choose between Daisy and his brothers. Even though he loves Daisy, the Renegade Sons are the only true family he has. He knows he can’t have her, yet he can’t let her go.

When Daisy moves on, Preach realizes what he’s lost. Can he prove that he’s the man for her, or is he too late?

☆✮ Other books in the Renegade Sons MC series ✮☆

Emily is a Kentucky native. Raised in Missouri, her family returned to Kentucky when she was a teen. She is proud to call the Bluegrass State home. She claims she bleeds blue–Wildcat Blue!

Emily has been married to her husband, David, for over twenty years. They share two lovable but irritating teenagers, Jess and Bailey. She is also the proud mom of a feisty terrier mix, Rae Rae.

Emily loves to read and has more books on her kindle than most people could read in a life time, but she intends to read every single one. Nope, no hoarding problem here! Her favorite author is Kristen Ashley, and she swears Kristen’s book Sweet Dreams changed her life.

Emily has co-authored two books with Dawn Martens, Whiskey Lullaby and Renegade Lady. She has also written one solo book, Windows. Many more are floating around in her head, and she hopes to get them all on paper before long. She loves sharing her dreams with her readers.

Dawn Martens is a young, spunky Canadian Author, who is widely known for her best-selling “Resisting Love” series that she co-authored with Author Chantel Fernando. Being a wife to Colin, and a mother to two (soon to be THREE!) beautiful little girls (Sarah (6), Grace (3), Ava on the way!) hasn’t stopped this Canadian Firecracker from pursuing her dreams of becoming a writer! She has also co-authored “Whiskey Lullaby” (book one in the Love Songs series) with her friend and fellow writer, Author Emily Minton; on top of serving as a mentor and support system for many Authors in the Indie community over the past few years. 2014 is shaping up to be a phenomenal year for Dawn, as the highly anticipated book two in the Love Songs series titled “Broken”. She will also be releasing a brand new gritty MC series, “Renegade Sons MC,” with Emily Minton, that will for sure take their avid readers on yet another mind blowing journey. Dawn’s number one passion in life is the written word, and she’s extremely thankful that she has to ability to share the ramblings from the characters inside of her head with the rest of the world! She also may or may not have the hugest girl crush on Author Kristen Ashley, who is her personal idol and helped inspire Dawn in the beginning of her Indie career. 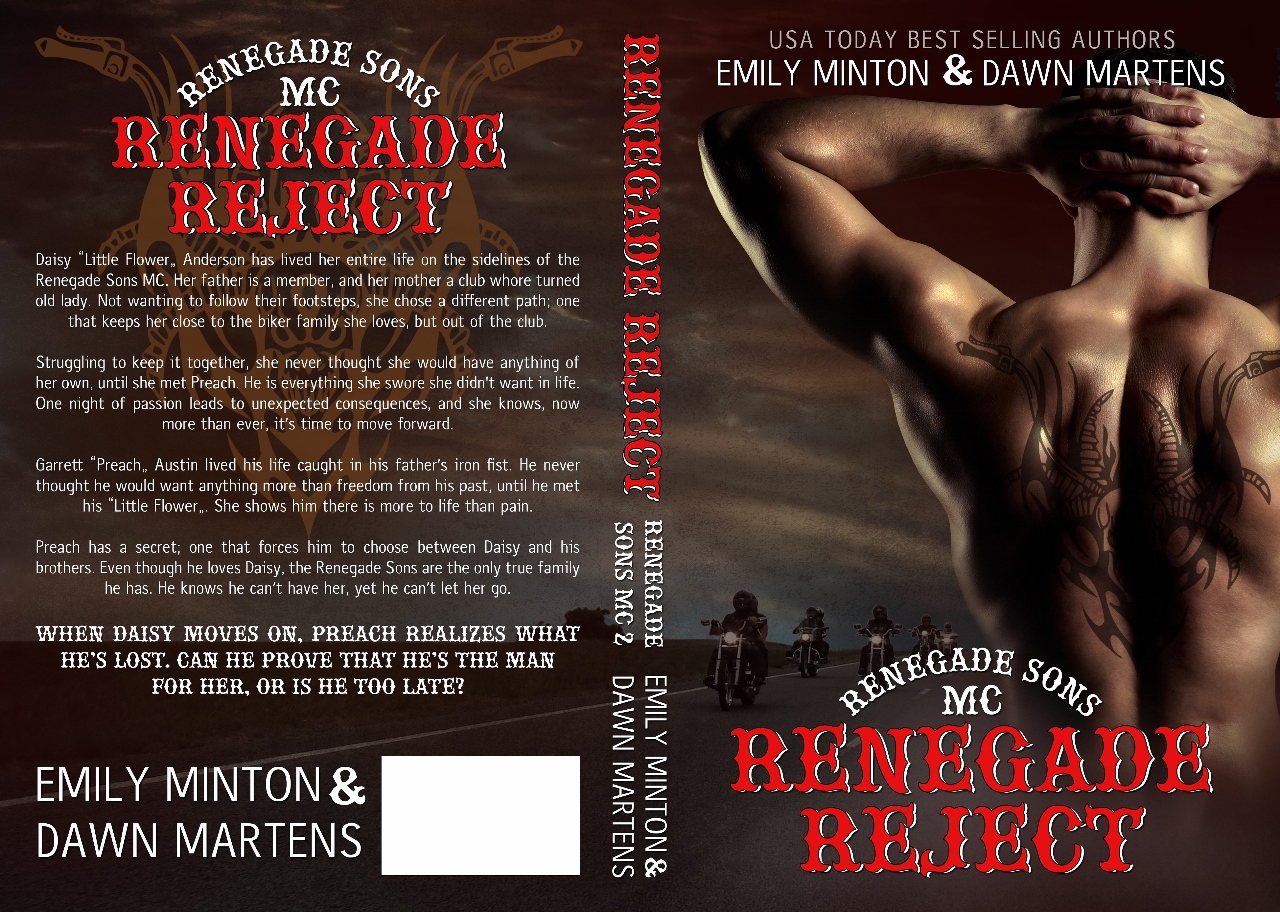 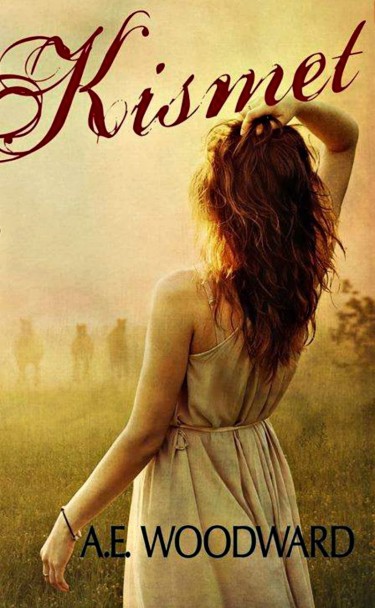