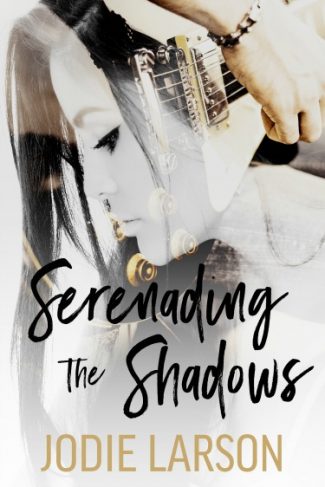 No one should have their life planned out at the age of three. Yet that's exactly what happened to Adrienne Carmichael. Paving the way as the "piano prodigy" was all her parents wanted...

All she wished for was to be normal, to be a regular teenager and everything that came with it - including the decisions that would shape her life.

Ten years later, scarred and broken, she knows that being alone isn't everything she imagined. The piano is finally everything, except nobody will ever hear her play again. All that changes when a sexy-as-sin rock god blows into her life. Tall and tattooed with jet-black hair and a dangerous bad-boy smile... he's every girl's fantasy.

To her, he's a distraction, yet Kade Evans is everything she shouldn't want. Instinct tells her to run, but she can't get him out of her mind.

But maybe, just maybe, he can be the one to pull her from the shadows before the darkness swallows her... for good. 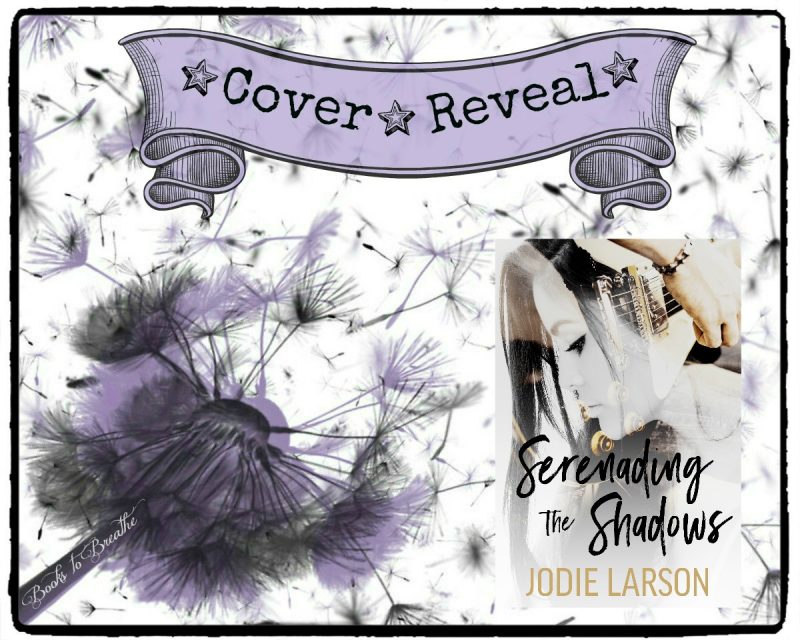 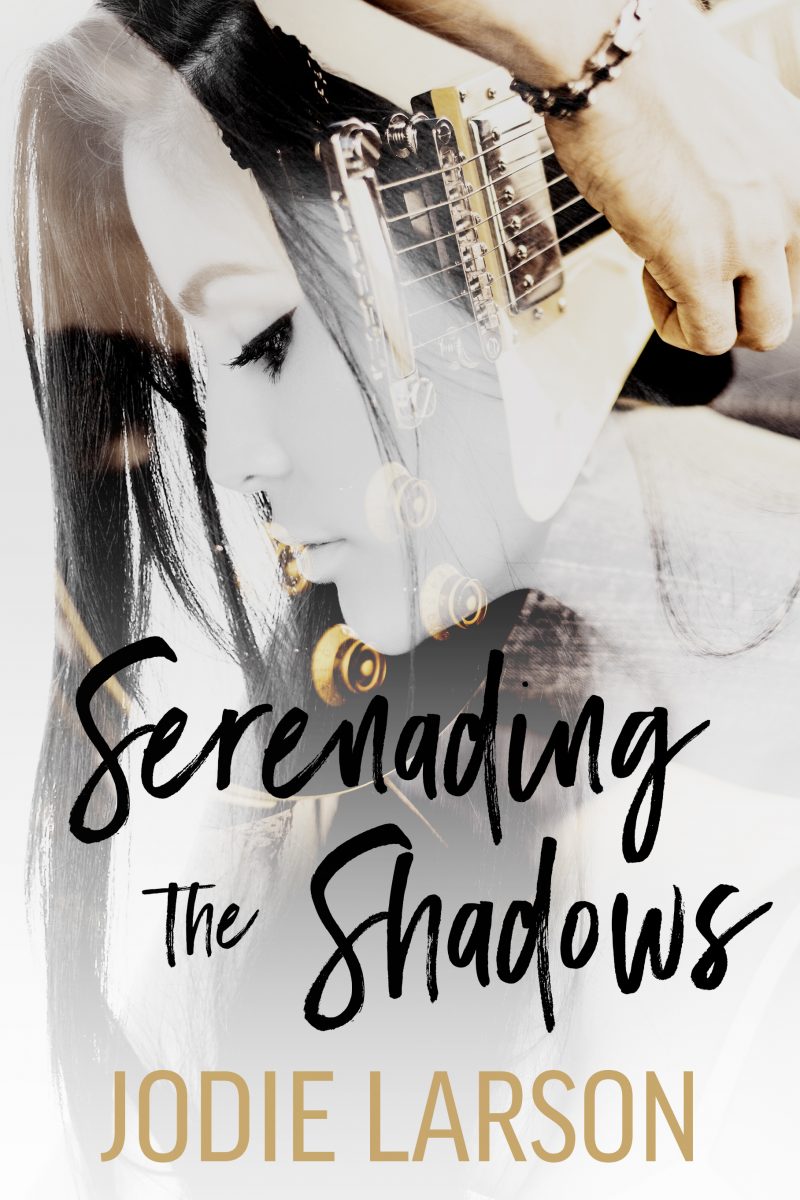 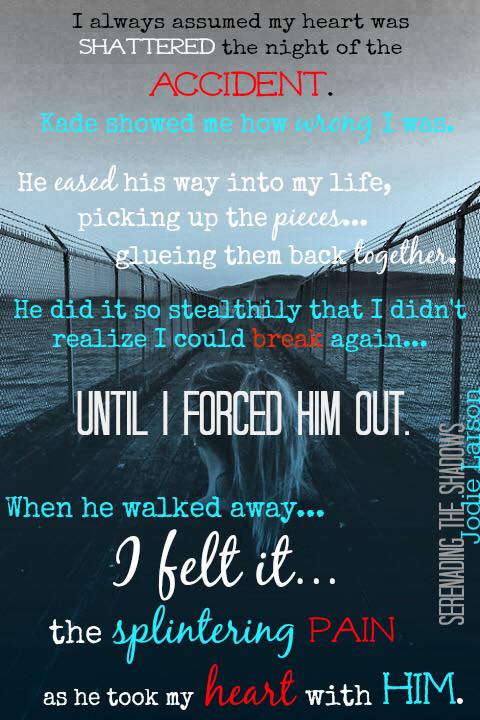 “Why? I don’t understand what the big deal is. Can’t you just move it so I can go out and live my life?”

Another crack of lightning illuminates the sky. The responding thunder rumbles in the background as the torrent of rain falls upon the ground. The cold, bitter wind howls against the glass as it presses forward, matching the mood inside the car.

“The big deal? Adrienne, you’re sixteen years old. There is no way we’re going to let you go to an overnight concert two hours away with that boy,” Mom says from the front passenger seat.

That boy? Ugh, why does she have to say it like he’s a disease? Just because Brian isn’t from our side of town doesn’t mean he’s not good enough. Sure, he dresses in nothing but baggy jeans and leather jackets, but he listens to me, treats me like a human and not a piano playing robot. In fact, half the time we’re able to sneak away together, the piano never comes into the conversation. I don’t have to pretend to be someone I’m not with him. I can just be me, whoever that is. Most days I’m not even sure anymore.

“You know how important this weekend is to your career.  You need to be there,” Dad adds.

I let out a frustrated groan and stomp my foot. “No! I’m sick and tired of playing on your schedule. You’re always trying to run my life. When do I get to have a say in what I do, or where I go, and when I play?” I run a hand through my hair, yanking at the roots. “You know what? Maybe I’ll give up the piano altogether just so I can be a normal teenager for once in my life!”

Playing the piano has been my world since I first crawled onto the bench at the age of three. My fingers hit the keys and played a simple melody: Twinkle, Twinkle Little Star. I had listened and watched my mother play it so many times I knew exactly what to do. That’s when my life, my freedom to choose, ended. Piano lessons, performances, traveling concerts, scholarships to private schools to work on my music, voice lessons, and anything else related to better my ability. Not once have I been able to go out on a Friday with friends. Those nights were dedicated to showing everyone that the local piano prodigy is going to make a name for herself.

“Sweetie, you have the rest of your life to do what you want. What we’re doing now is helping you succeed for the future. You have a gift, and it shouldn’t be wasted,” she says. “Trust me, Adrienne, you’ll thank us later. Besides, it’s only for a few more years.” She turns and pats my leg. “I wouldn’t be surprised if the orchestra asks you to play with them for the new season.”

“Maybe I don’t want to play with the orchestra. Maybe I want to do something for myself.” I can feel the heat crawl up my neck the more this conversation doesn’t go my way. Time for the kill. “You can’t live your life through me. Eventually, you’re going to have to deal with the fact that you’re a washed up nobody who can’t play the piano anymore, Mom.”

A twinge of pain hits me as I watch my mom’s face fall from the sharpness of my words. It’s not like I’m asking for much. One weekend of normalcy is all. That shouldn’t be too much to ask for.

“Adrienne, you’re not going, and that’s final. You will go to this performance, and you will play the piano. And when they offer you the seat with the orchestra, you will accept.” The scowl Dad gives me in the rearview mirror almost makes me shrink back in my seat. “We are done talking about this. It’s what’s best for your future,” he says with the utmost finality in his voice.

I lift my face to the ceiling and let out a frustrated yell. “You don’t understand! I hate you! I hate you both! I’m nearly an adult. I should be making decisions about my life!”

Angry bolts of lightning flash across the sky, creating a distraction from the deafening rain pelting the car. Within seconds, the car shakes and rocks with the roar of thunder and gusts of wind. Darkness surrounds us again as the sky opens up, releasing its fury.

Suddenly, the car jerks and we float across the water on the road. Dad’s knuckles turn white before he corrects us. The wipers can barely keep up, making it nearly impossible to see.

Dad turns his head to say something, only he never has the chance to speak.

Mom clutches his shoulder, pulling at his shirt.

Everything moves in slow motion. Scenes flash before my eyes. Blinding white lights pour in from the oncoming vehicle. Our screams echo in my ears as I brace for impact.

And then there’s nothing.

I don’t know where I am or how much time has passed. Faint voices sound above me, while machines beep in the background. I can’t move. I can only listen to what the voices are saying.

“How’s her pressure?” someone else asks.

“Eighty over forty.” The woman’s voice grows fainter as the darkness threatens to pull me under again.

I want to move, but nothing works. I want to cry, to scream, to ask what happened, but I have no voice. Something’s wrong. Why won’t my body respond?

Sounds fade in and out, the voices and machines are a constant now, the only reminders I’m still here.

“She’s stable now,” a familiar masculine voice says. “She’ll need to stay here in ICU for a while, though. How’s her family?”

“Died on impact,” another voice says. “They never had a chance. She was lucky she was in the back seat.”

It’s what I wanted.

It’s what I asked for.

I guess what they say is true.

Be careful what you wish for. 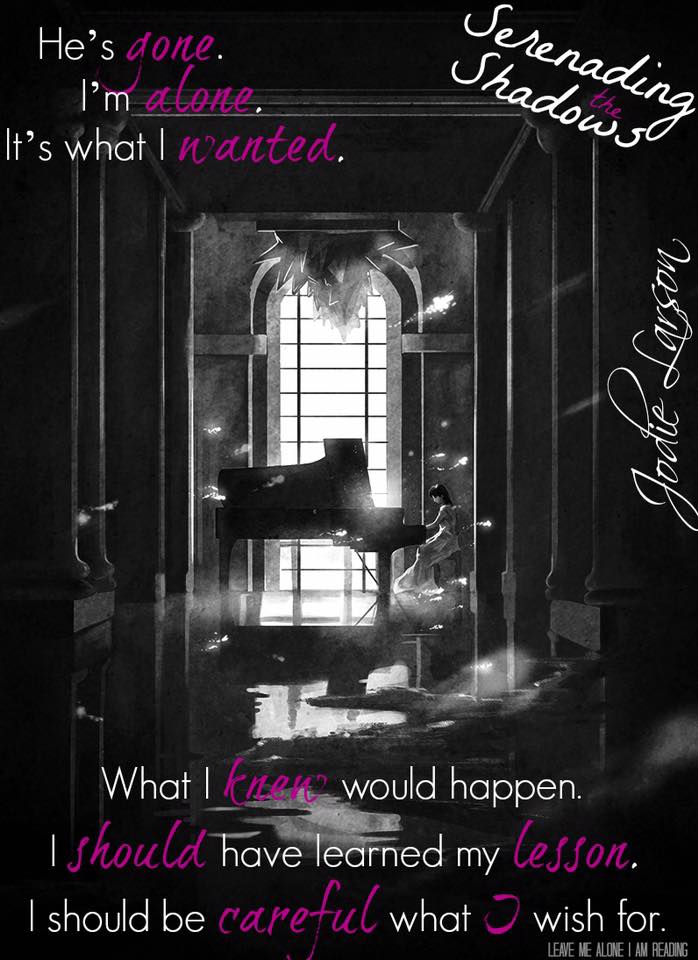 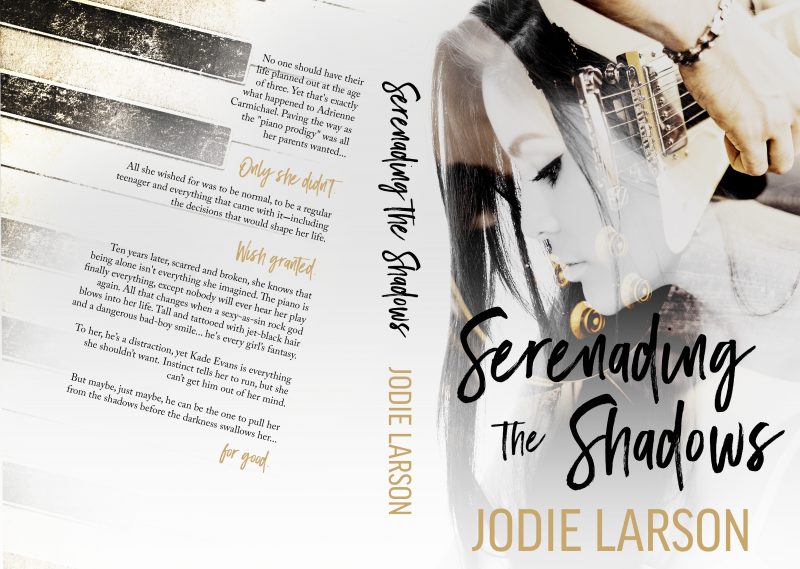 Jodie Larson is a wife and mother to four beautiful girls, making their home in northern Minnesota along the shore of Lake Superior. When she isn’t running around to various activities or working her regular job, you can find her sitting in her favorite spot reading her new favorite book or camped out somewhere quiet trying to write her next manuscript. She’s addicted to reading (just ask her kids or husband) and loves talking books even more so with her friends. She’s also a lover of all things romance and happily ever afters, whether in movies or in books, as shown in her extensive collection of both.

Cover Reveal: The Ninth Inning (The Boys of Baseball #1) by J Sterling

One response to “Cover Reveal + Giveaway: Serenading the Shadows by Jodie Larson”