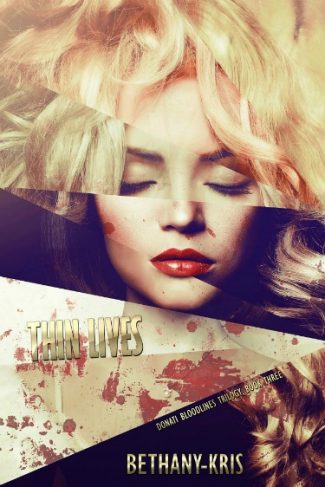 Some days, it felt like Emma had just imagined it all.
Like maybe everything she had been with Calisto was just a dream.
Emma knew it was crazy—it was impossible to forget what she had shared with Calisto Donati. All their love, the stolen moments, their foulness together, and the beauty underneath it all were real.
They were real.
But he didn’t know.
He didn’t know any of it.
And little by little, with every day that passed her by, Emma found she was losing those pieces that reminded her they had existed once.
Just like the rosary.
All too soon, Emma knew … there would be nothing left.

Emma hadn’t given him a choice.
Her, not him.
Yeah, that’s what Calisto was going to keep telling himself. He refused to feed into the strange curiosity he had about Emma Donati. It had been building from the moment he’d first seen her face after he’d awakened. He wouldn’t admit that for longer than he cared to admit, he thought there was more behind her false smile, polite words, and the distance she put between her and him—that there might be more to them.
He couldn’t.
Except … he was feeding into it.
Calisto just wasn’t sure what it was.
But tonight he was going to find out.
Whether she wanted to tell him or not. 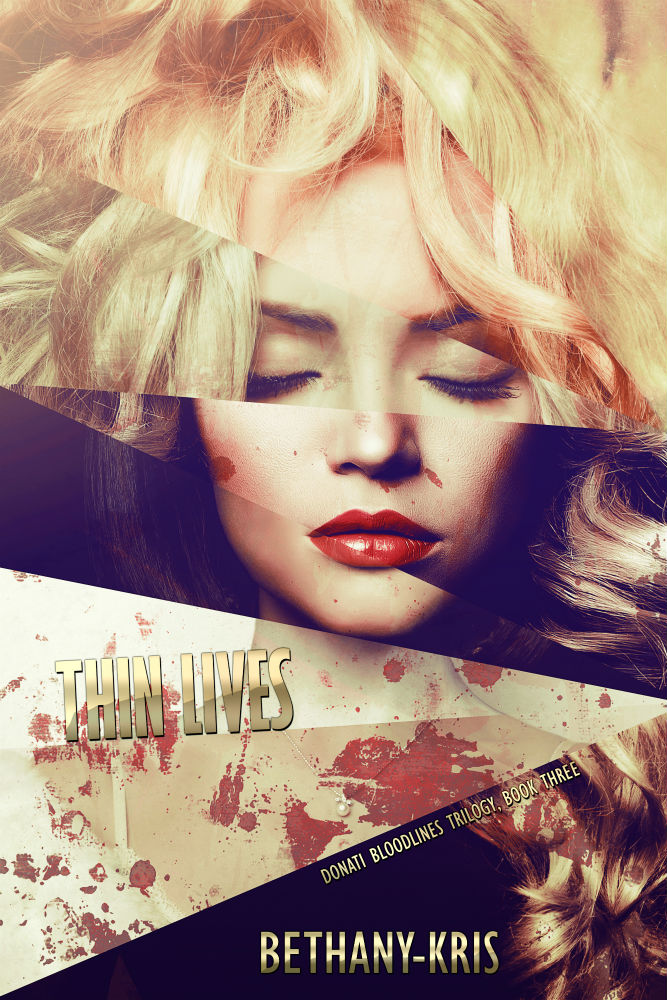 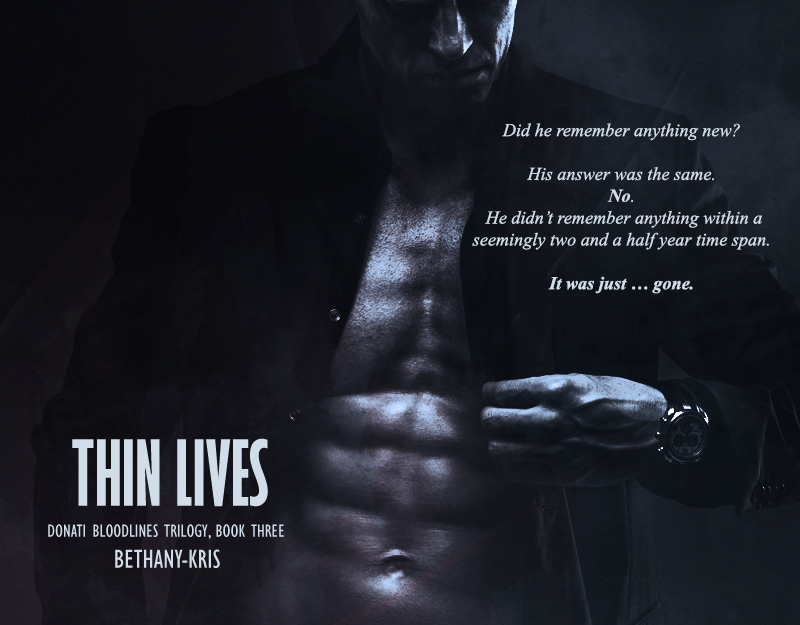 “Please, just wait a moment,” Father Day begged. “Talk to me a little while longer. Let me help you, Calisto.”

The priest grabbed Calisto’s arm in an attempt to stop him. It barely fazed him at all when he shrugged the man off and continued storming down the aisle.

In his current state—so enraged, confused, and hurting—he didn’t hear them.

“Don’t you remember the last time you were this angry?” the priest called after him.

He did, but it didn’t make a difference.

Calisto flew out of the church and into damp air. He cut through the rain, ignoring the splattering droplets falling from the black sky.

Maybe he shouldn’t have ignored it.

Before long, Calisto was inside his car and driving down the interstate. Toward where, he didn’t know. But driving felt good—damn good.

He pressed the pedal harder.

He gripped the wheel tighter.

Faster, until the engine roared and gears protested on the last shift.

Rain blurred the windshield, but Calisto’s focus was far beyond the squiggly lines running down the glass before the wipers swiped them away. There was so much agony in his heart, and something akin to betrayal sewing itself into the very marrow of his bones.

He had done this to himself.

His car flew past vehicle after vehicle on the interstate. He couldn’t even find it in himself to give a shit about the speed limit, or that he could feel the car loosing traction under his control.

and kept the car straight.

Driving was his one sense of freedom.

Wasn’t that what he said?

Wasn’t that what he told—

Calisto’s gaze caught sight of a black SUV in his rear-view mirror, bringing him out of the hell that was his mind. For a moment, he didn’t begrudge the reprieve it afforded him.

But it was a mistake to look.

The second he stared into the rear-view mirror, high beams flashed on from the SUV behind him, blinding his vision instantly. He was driving far too fast for someone to be following him as closely as that vehicle currently was.

It wasn’t accidental, he realized.

It was purposeful.Calisto’s reaction time was off just by a fraction of a breath as he regained focus on the road ahead of him. Suddenly, it seemed like the dark interstate was empty, but for his car and that SUV just inches from his bumper.

He missed his exit because of the distraction.

Another one was coming, but not for another ten miles or so.

His right hand itched to leave the wheel, wanting to reach out to the side and grab his phone, and make just one call to the only person who mattered to him.

He didn’t dare loosen his grip.

Even the stars were hiding in the sky.

He glanced into the mirror again, careful to avoid the direct glare of the high beams, and quickly noted how the SUV swerved to the left as if they were going to pass him. There was no room to pass with him being in the left lane as it was.

But the action of the SUV swerving was enough to make Calisto react out of nothing but instinct as he forced his own car to the right.

Maybe it was a little bit of hope, too.

He felt the tires slip on the slick pavement as he slid into the right-side lane. There was no stopping the unmistakable twist of the rear-end when his car began to slide sideways. No matter how hard he pushed the pedal or straightened the wheel to bring his car out of the beginning of a tailspin, he couldn’t do it.

He had already lost control.

Calisto had just a few seconds of suspended breath and waiting to reflect over his time and choices. There was no flash of life before his eyes—just the knowledge that he had been a part of this world once, and that in itself was a mark left behind.

But he was still sorry.

It was the sight of black to his left that made Calisto turn his head. His car was almost halfway turned as the SUV came to pass at his side.

Hope left as the passenger window rolled down. Through the squiggly lines of water running down his window, Calisto could only see black staring back at him.

Black and a flash of brushed silver.

The plume of light was instant, and shocking. In the background, he caught a glimpse of the profile of the person shooting at him, but he was already reacting.

Calisto jerked the wheel of his car at the same time, forcing his car into a harder, faster spin that would probably turn his car over. He heard the bullet shatter glass a second before the roof of his car met pavement.

He wasn’t buckled in.

His shoulder hit the door, his leg crunched under a snapping wheel, and his head hit metal. 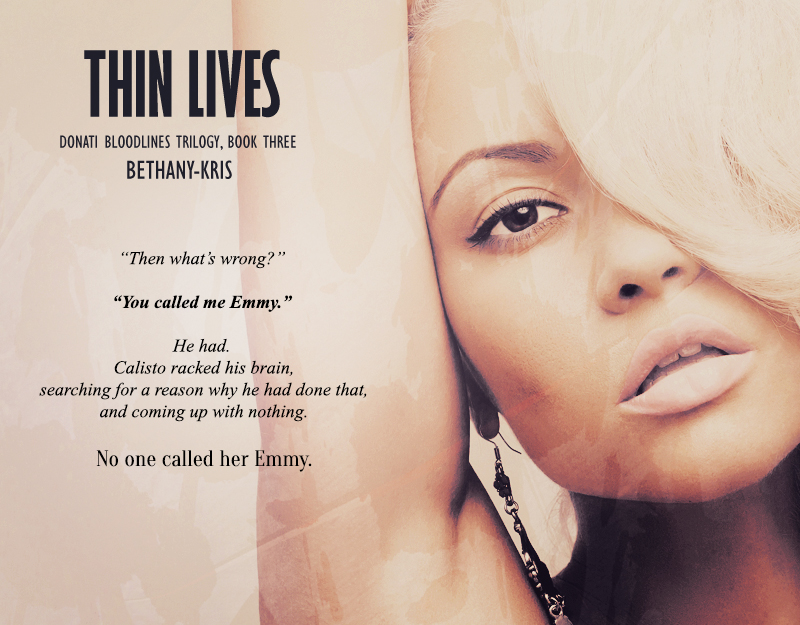 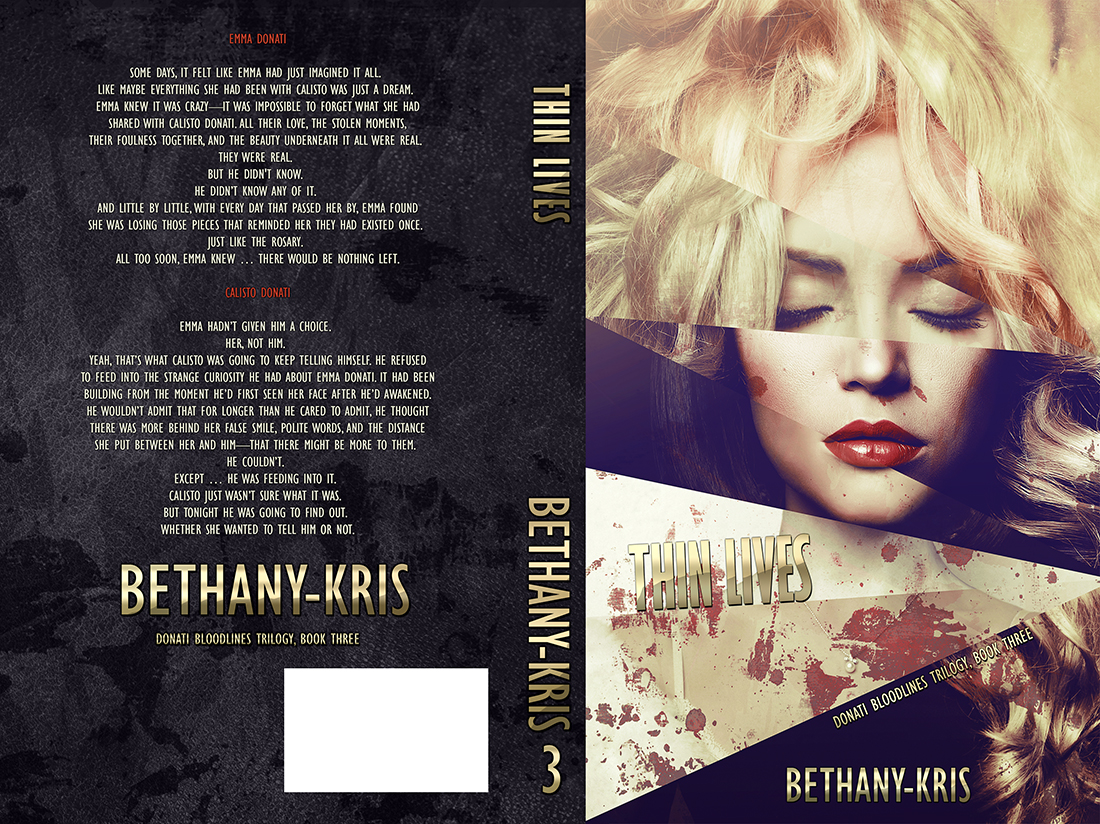 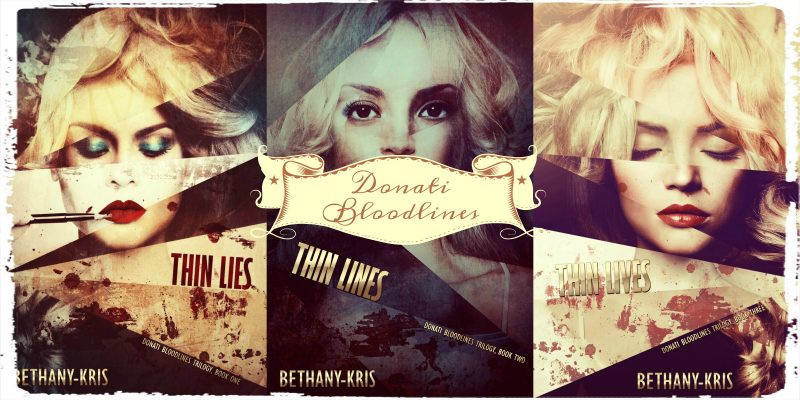 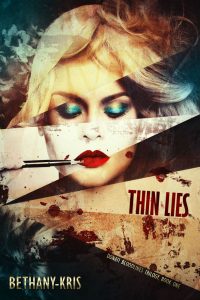 Calisto Donati
She was just a woman. That’s what Calisto wanted to tell himself; that’s what he wanted to believe. Emma was nothing more than a woman. There were other women for him to want. To obsess over.
It couldn’t be Emma Sorrento.
Not for Calisto.
She was taken.
She was claimed.
She was not his.
In a few days, Calisto would hand her off, and that would be that. He wondered why it wouldn’t be that easy to let her go.
What good had saving her done?
He had simply taken her from one monster to give her to another.

Emma Sorrento
Emma slid on her mask. All someone would need to do was look close enough to see what was really beneath the sheer falseness of her smile.
At the other end of the table, Emma found her lies staring her right in the face.
He smirked.
And winked.
Calisto Donati was her worst mistake, her greatest shame, and the one thing she still wanted more than anything. Emma could still feel him all over her, long after his touch and kiss was gone. In thirty days, her entire world had changed—he had changed her.
Emma had a feeling that if she played another game with Calisto, she would surely lose.
She had already lost once.
Wasn’t it enough? 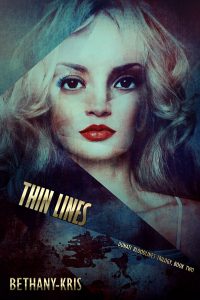 Calisto Donati
Calisto had never been a fan of pain, but he found it provided a certain relief.
It was a high that couldn’t compete with anything else he experienced. That was why he fought bare-knuckled, why he drove fast, despite knowing he might crash, and why he still enjoyed looking at Emma Donati—no matter her current status.
Pain felt good.
He might have been a fool for doing so, but as long as he got what he wanted from it, he didn’t really care.
When he fought, he was given release. When he drove, he was given freedom. When he looked at Emma, he was given memories.
All of them brought a certain level of pain. All three might kill him someday.
Calisto glanced at Emma, taking her in again when she didn’t know he was looking.
He realized then that only one might actually be worth dying for.

Emma Donati
Emma kept her gaze on the book in her lap, pretending like there wasn’t an argument going on across the room. She had become terribly good at acting like she didn’t hear.
Calisto watched her out of the corner of his eye while he argued on with Affonso.
She was too focused on Calisto to care about their fight.
His anger. The tightness of his jaw. Searing soul-black eyes.
The two men were not the same. They might have shared blood, but their hearts were entirely different. One man never let her out of his sight when he was nearby. The other acted like she didn’t exist.
This was what it was like, she realized, to be in love with someone she couldn’t have.
Calisto Donati would never be hers.
This wasn’t a fairy tale that would end happily.
They weren’t star-crossed. They were impossible. 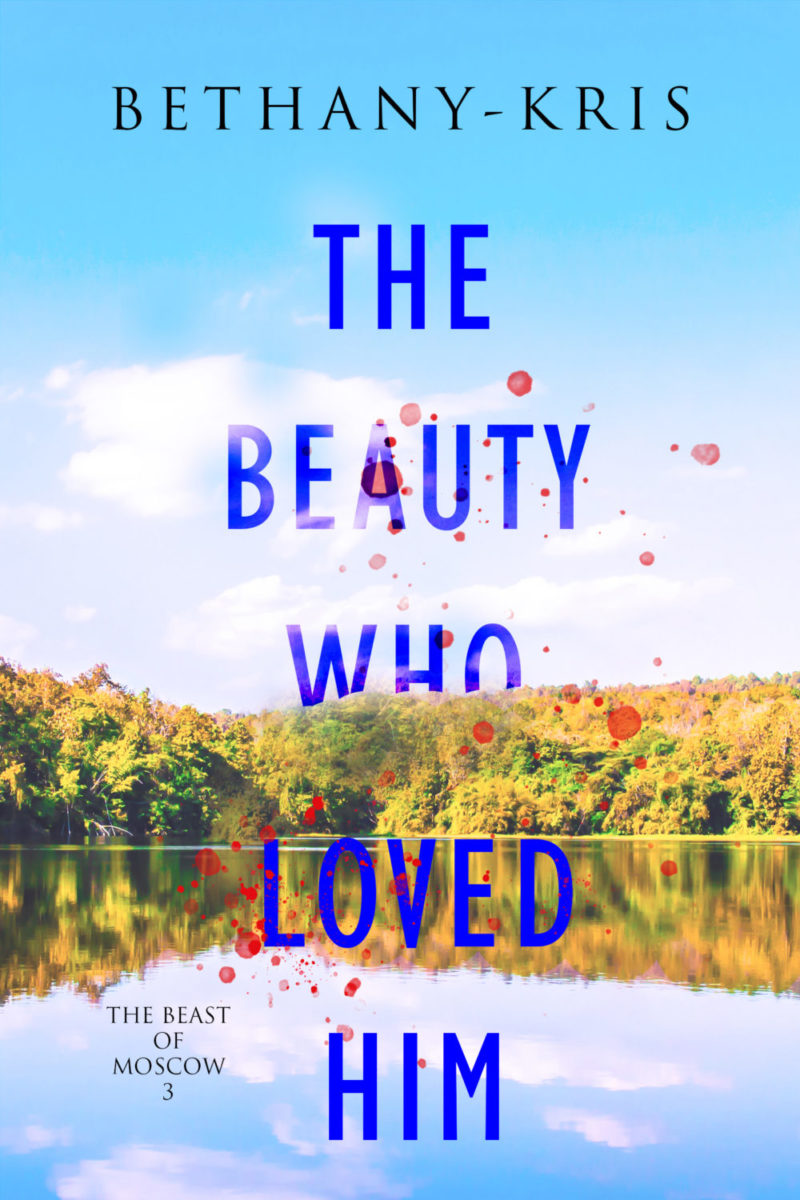