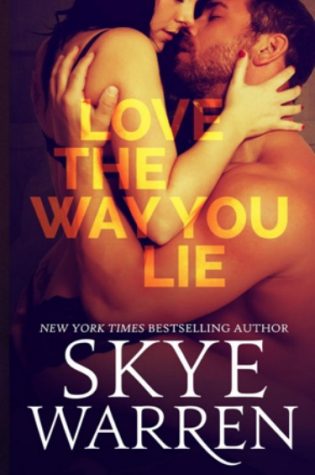 He’s the one man who wants to help me, but he has his own agenda. He has questions I can’t answer. What are you afraid of? 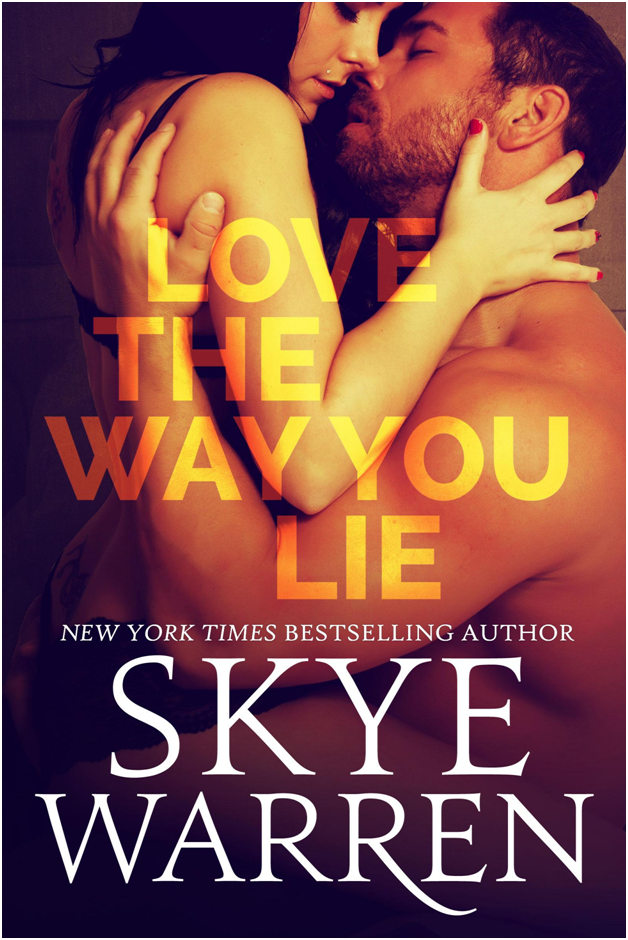 The bright lights, the smoke. The wall of sound that feels almost tangible, as if it’s trying to keep me out, push me back, protect me from what’s going to happen next. I’m used to the dancing, and the catcalls, and the reaching, grabbing hands—as much as I can be. But I’m never quite used to this moment, being blinded, feeling small.

I reach for the pole and find it, swinging my body around so the gauzy scrap of fabric flies up, giving the men near the stage a view of my ass. I still can’t quite make anything out. There are dark spots in my vision.

The smile’s not even a lie, not really. It’s a prop, like the four inch heels and the wings that snap as I drop them to the stage.

A few people clap from the back.

Now all that’s left is a lacy bra and panty set. I grip the pole and head into my routine, wrapping around the pole, sliding off, and starting all over again. I lose myself in the physicality of it, going into the zone as if I were running a marathon. This is the best part, losing myself in the burn of my muscles and the slide of the metal pole against my skin and the cold, angry rhythm of the song. It’s not like ballet, but it’s still a routine. Something solid, when very few things in my life are solid.

I finish on the pole and begin to work the stage, moving around so I can collect tips. I can see again, just barely, making out shadowy silhouettes in the chairs.

There’s a regular on one side. I recognize him. Charlie. He tosses a five dollar bill on the stage, and I bend down long and slow to pick it up. He gets a wink and a shimmy for his donation. As I’m straightening, I spot another man on the other side of the stage.

His posture is slouched, one leg kicked out, the other under his chair, but somehow I can tell he isn’t really relaxed. There’s tension in the long lines of his body. There’s power.

And that makes me nervous.

I spin away and shake my shit for the opposite side of the room, even though there’s barely anyone there. It’s only a matter of time before I need to face him again. But I don’t need to look at him. They don’t pay me to look them in the eye.

Still I can’t help but notice his leather boots and padded jacket. Did he ride a motorcycle? It seems like that kind of leather, the tough kind. Meant to withstand weather. Meant to protect the body from impact.

The song’s coming to a close, my routine is coming to an end, and I’m glad about that. Something about this guy is throwing me off. Nothing noticeable. My feet and hands and knowing smile still land everywhere they need to. Muscle memory and all that. But I don’t like the way he watches me.

There’s patience in the way he watches me. And patience implies waiting.

I reach back and unclasp my bra. I use one hand to cover my breasts while I toss the bra to the back of the stage. I pretend to be shy for a few seconds, and suddenly, I feel shy too. Like I’m doing more than showing my breasts to strangers. I’m showing him. And as I stand there, hand cupping my breasts, breath coming fast, I feel his patience like a hot flame.

This time I do miss the beat. I let go on the next one, though, and my breasts are free, bared to the smoky air and the hungry eyes. There are a few whistles from around the room. Charlie holds up another five dollar bill. I sway over to him and cock my hip, letting him shove the bill into my thong, feeling his hot, damp breath against my breast. He gets close but doesn’t touch. That’s Charlie. He tips and follows the rules, the best kind of customer.

I don’t even glance at the other side of the room. If the new guy is holding up a tip, I don’t even care. He doesn’t seem like the kind of guy who follows rules. I don’t know why I’m even thinking about him or letting him affect me. Maybe my run-in with Blue made me more skittish than I’d realized.

All I have left is my finale on the pole. I can get through this.

This part isn’t as physically strenuous as before. Or as long. All I really need to do is grind up against the pole, front and back, emphasizing my newly naked breasts, pretending to fuck.

That’s what I’m doing when I feel it. Feel him.

I’m a practical girl. I have to be. But there’s a feeling I get, a prickle on the back of my neck, a churning in my gut, a warning bell in my head, when I’m near one of them. Near a cop. My eyes scan the back of the room, but all I can see are shadows. Is there a cop waiting to bust someone? A raid about to go down?

I can barely suck in enough air. There’s only smoky air and rising panic. Blood races through me, speeding up my movements. A cop. I feel it like some kind of sixth sense.

Maybe he feels my intuition about him, because he leans forward in his seat.

In one heart-stopping moment, my eyes meet his. I can see his face then, drawn from charcoal shadows.

Beautiful, his lips say. All I can hear is the song.

The last note calls for a curtsey—a sexy, mocking thing I choreographed into my routine. Like the one I’d do at the end of a ballet recital, made vulgar. I barely manage it this time; a rough jerk of my head and shoulders. Then I’m gone, off the stage, running down the hallway. I’m supposed to work the floor next, see who wants a lap dance or another drink, but I can’t do that. I head for the dressing room and thrown on a T-shirt and sweatpants. I’ll tell them I feel sick and have to leave early. They won’t be happy, and I’ll probably have to pay for it with my tips, but they won’t want me throwing up on the customers either.

I run for the door and almost slam into Blue.

He’s standing in the hallway again. Not slouching this time. There’s a new alertness to his stare. And something else—amusement.

“I have to… my stomach hurts. I feel sick.” I step close, praying he’ll move aside.

He reaches up to trace my cheek. “Aww, should I call the doctor?” His hand clamps down on my shoulder. “I wouldn’t want anything bad to happen to you.”

I grip my bag tight to my chest, trying to ignore the threat in his words. And the threat in his grip. I really do feel sick now, but throwing up on him is definitely not going to help the situation. “Please, I need to leave. It’s serious. I’ll make it up later.”

“Please let me go.” The words come out pained, my voice thin. It feels a little like my body is collapsing in on itself, steel beams bending together, something crushing me from the outside.

Regret flashes over his face, whether for refusing my offer or forcing me that low. But this time, he doesn’t let me go. “There’s a customer asking for you. He wants a dance.” 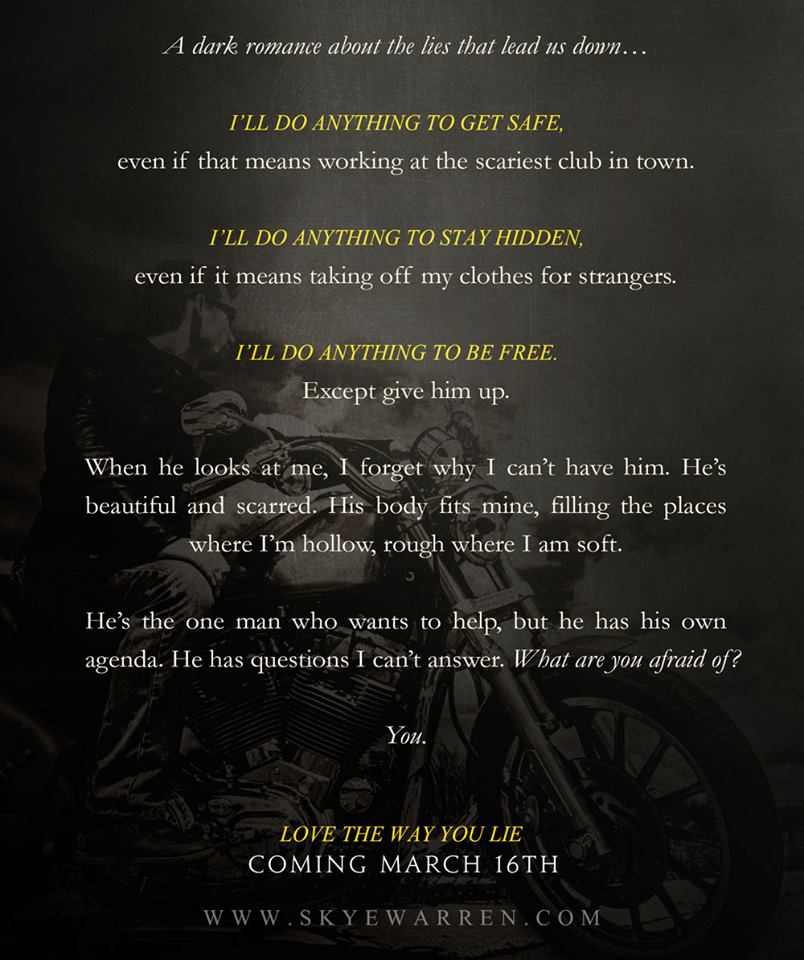 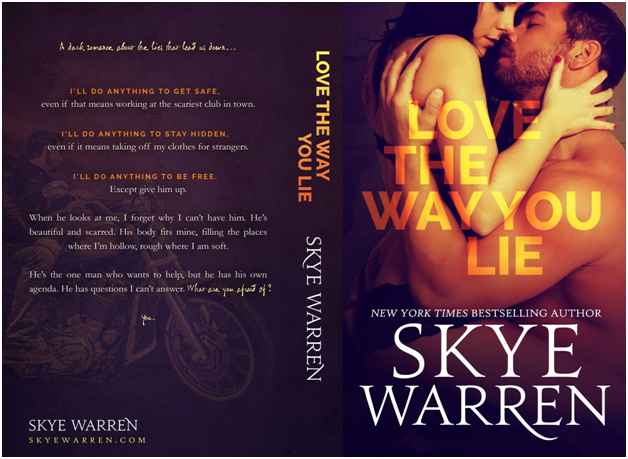 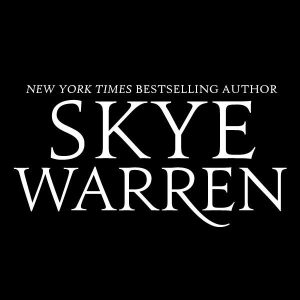 Skye Warren is the New York Times bestselling author of dangerous romance such as the Endgame trilogy. Her books have been featured in Jezebel, Buzzfeed, USA Today Happily Ever After, Glamour, and Elle Magazine. She makes her home in Texas with her loving family, sweet dogs, and evil cat.