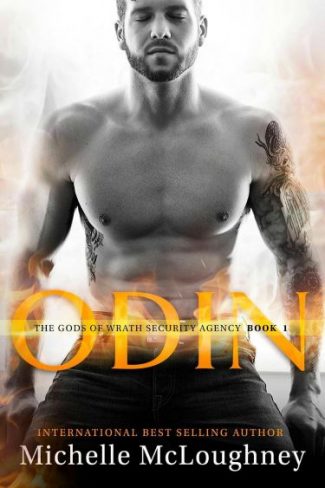 Navy Seal Odin Byrne believes in two things, the SEAL code of honor and the ability of his Team. When he loses one of his brothers-in-arms, he loses part of himself.

Starting afresh with his Team and back home in Boston, Odin has only one focus, his uncle Declan’s security and detective agency, ‘The Gods of Wrath’. A new team member is the last thing Odin wants, especially an ex-con who is hot as hell and mouthy to boot. Fighting for control of his agency, his heart, and his damn hormones, isn’t easy. When a new case threatens those closest to him, Odin must work with his adversary to bring a murderer to justice. Simple, apart from the memory of his lips on hers, and that one hot night.

Jasmine McCarthy is starting a new life in Boston. After three years in an Irish prison for a crime committed by her ex-husband, she craves a new start, a new chance. When her friend Declan Byrne gifts her a part of his agency, Jasmine sees it as her duty to join the team and follow his wishes, regardless of the opinion of her formidable new boss, Odin Byrne. The pig-headed arrogant Ex-SEAL would be a lot easier to ignore, if she hadn’t already had a taste.

Jasmine and Odin want nothing more than to stay the hell away from each other, if only chemistry and fate would play ball… 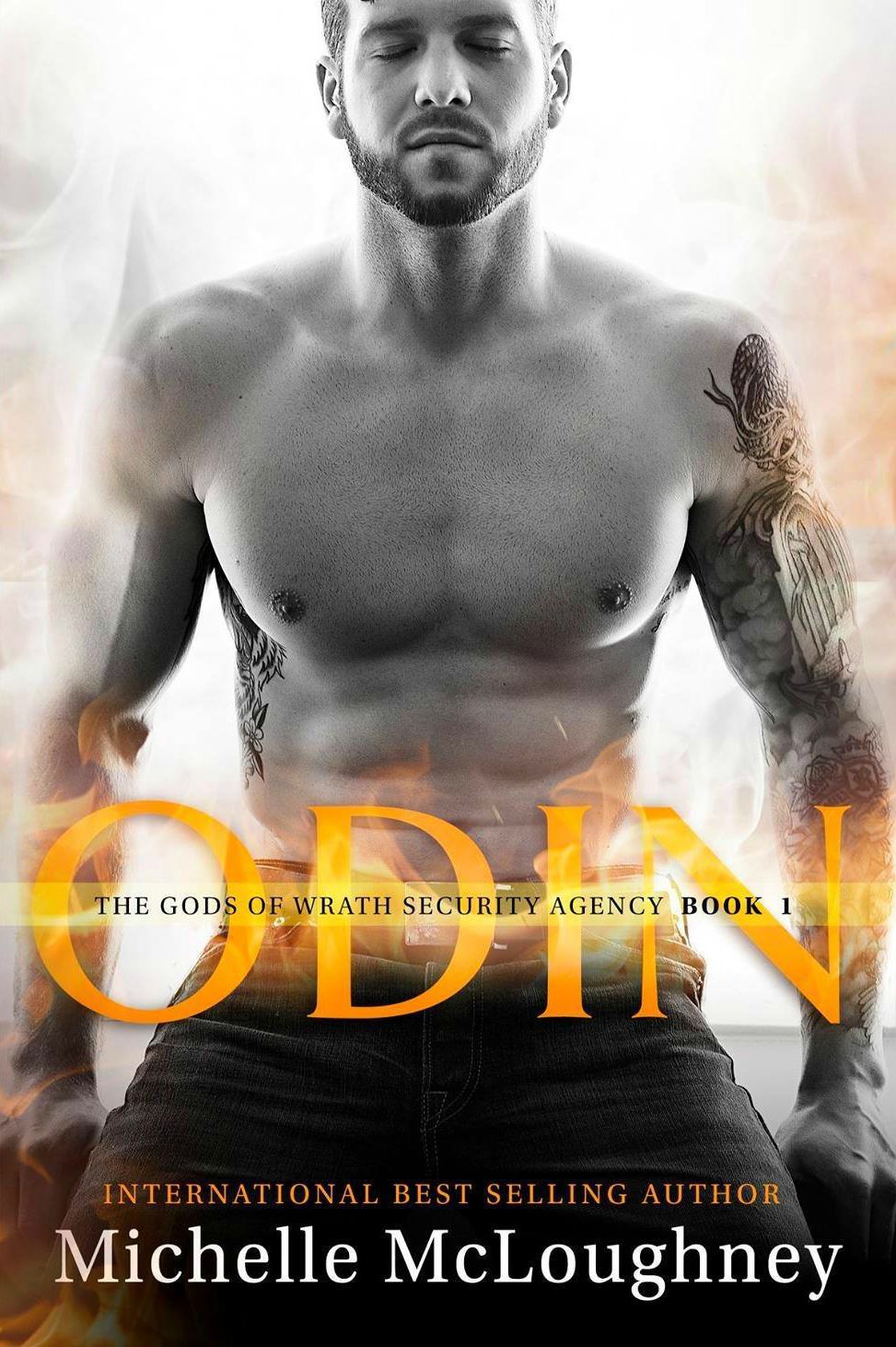 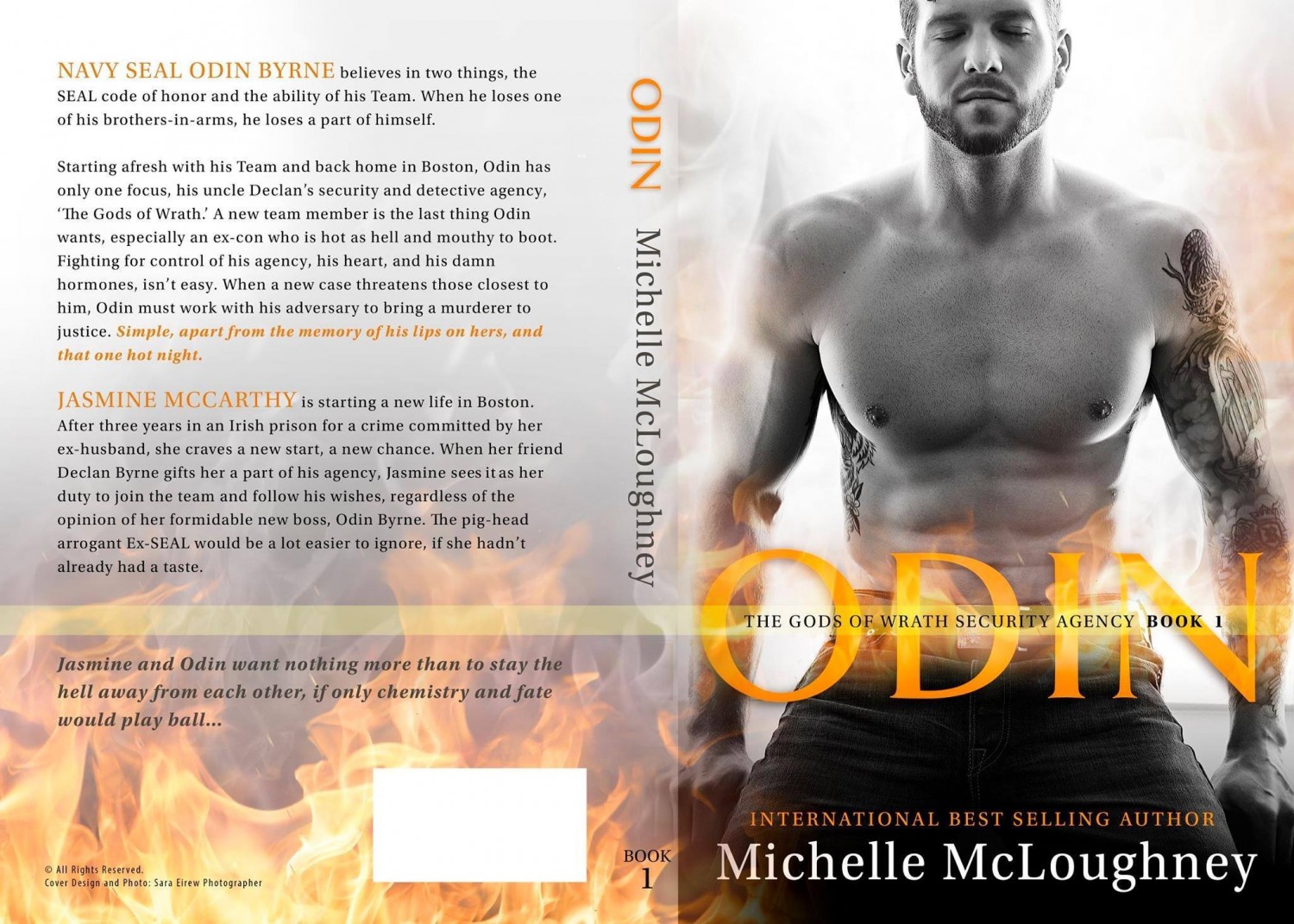 (The Gods of Wrath Security Agency #2) 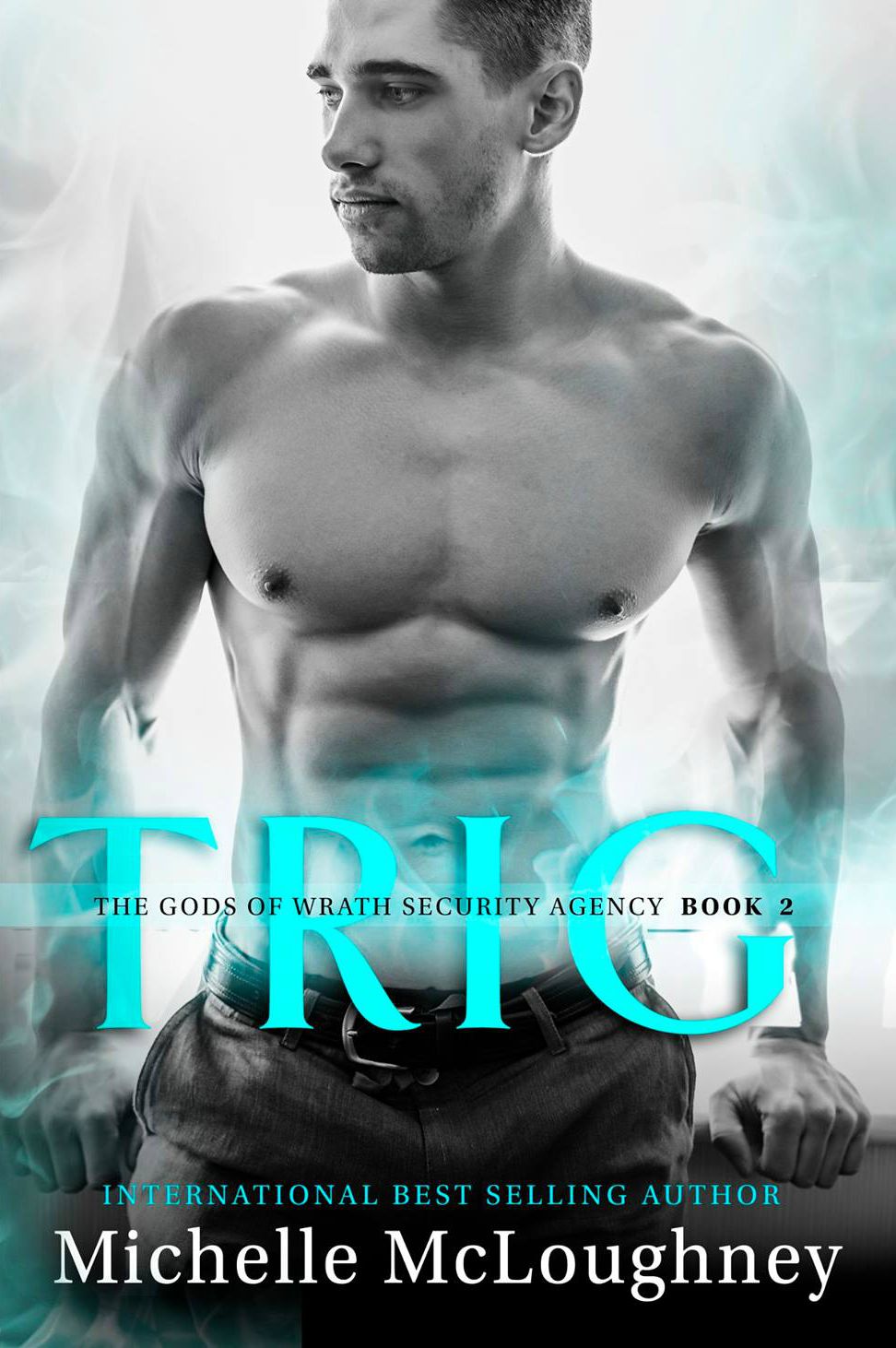 Thomas “Trig” Sanchez is all about honor, all about the Gods of Wrath security agency, and all about family. Trig has no plans to settle down anytime soon, he lives his life-like he drives his cars, fast and hard. Trig loves women and they love him too, as long as there’s no commitment involved, then no one gets hurt.

When Trig is assigned a security detail to babysit a notoriously difficult artist, he’s less than thrilled at the prospect. Until he meets Saoirse, and everything about the life he led before her seems cheap and meaningless. Her sky and defensive nature challenges him like no other woman, but the vulnerability he glimpses just below the surface brings out the fierce protector in him. Saoirse wants nothing from him, and all of a sudden Trig wants commitment in the worst possible way.

Saoirse Devlin is in trouble, trouble of the worst kind. Art is her soul, and through sculpture she lives a life of fantasy and sexual freedom. In reality, her crippling shyness keeps her locked away from the world, especially the world of men. When an obsessive fan threatens Saoirse’s safety, her brother hires the Gods of Wrath to provide protection. Saoirse doesn’t relish the thought of having a shadow, especially not some big bossy man-child. Until she meets Trig, now the only thing she can think of, is how it would feel to have his big bronzed body wrapped around hers.

Trig has finally found ‘the one.’ Now, he just has to keep Saoirse alive long enough to convince her that he’s the one, for her. 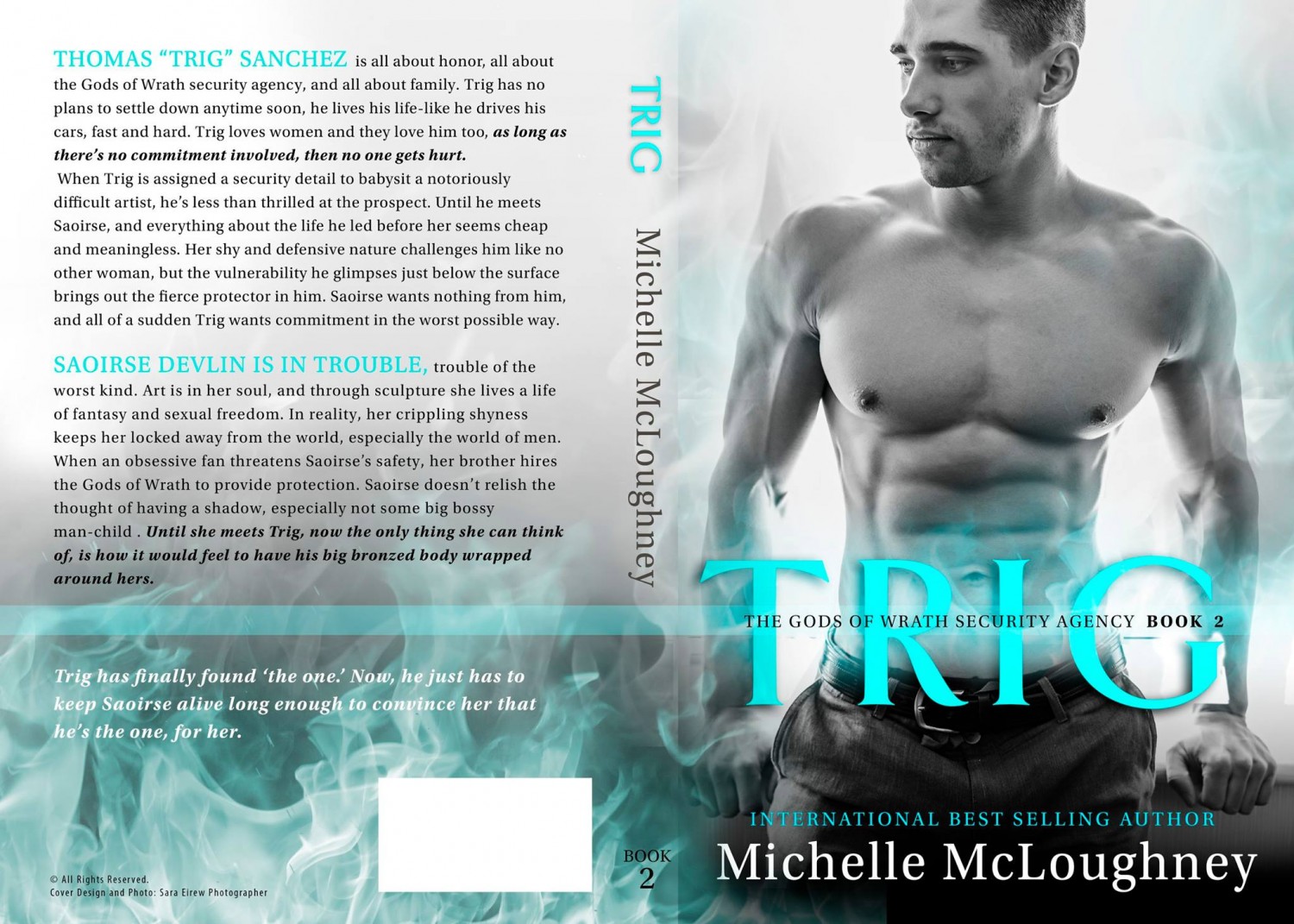 Hello people who inhabit planet earth! Michelle Mcloughney is a 40 year old Montessori teacher from the south west of Ireland and author of the Amazon Bestselling Saga The O’Malleys.

As much as she loves her job working with kiddies,Michelle loves to write even more. When not working or being a wife and mum, Michelle can usually be found daydreaming and plotting scenarios about heroes and villains, lovers and losers. Her stories are tales of love and sometimes heartbreak, with a bit of humour and plenty of sauce thrown into the mix. Got to have the sauce, right!

The heroines of Michelle’s stories are strong and quirky girls, because these are all the qualities of Michelle’s real life friends. She writes compassionate, caring, but self assured and cheeky male characters, because Irish men are hard to handle at the best of times! Michelle values all comments and suggestions and is eternally grateful for the support and love from the reading, reviewing and blogging communities that she have received thus far. You guys do a hell of a job!

As well as writing, Michelle also love reading, eating ice-cream and having a drink and a chat with friends. None of the above help her to achieve the so called perfect figure, but it sure makes life more enjoyable! Michelle is a small town girl and loves the simple things in life. She likes nothing more than going to her local pub, sitting near the fire or joining in on a sing song and drinking a hot whiskey, on a cold winters night. If you have never been to Ireland,this is a mandatory activity!

Michelle’s debut novel ‘Rory’ (Juice, The O’Malleys book 1), was released on September 14th 2014 and very quickley became an Amazon Best selling saga. The first book in a five part series, begins the story of a family of Irish owners of luxury resorts around the world.

Rory O’Malley, a tattooed bad boy millionaire, hires sweet Cass Evans for a dream job within his company.He needs Cass’ help, and will do anything to get it. What he didn’t expect was to want her as badly as he does. But what happens when Cass finds out Rory’s real reason for hiring her? Sparks fly in this sexy, sassy, adult read. Over 18’s only.