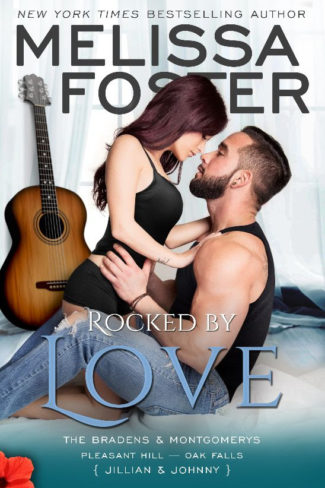 Scorching heat, laugh-out-loud humor, and an abundance of swoon-worthy moments make this sexy new standalone romance by New York Times and Wall Street Journal bestselling author Melissa Foster unputdownable. No cheating, no cliffhangers, and guaranteed to leave you breathlessly in love with the fiercely loyal and wickedly naughty characters in the Love in Bloom series. All Love in Bloom books are written to stand alone or be enjoyed as part of the larger series, so dive in and enjoy the ride!

He’s a rock star with a secret. She’s a fashion designer with a nose for nonsense.

When Johnny Bad hires Jillian Braden to design his tour wardrobe and cancels for the umpteenth time, she’s had enough. Jillian is determined to set him straight, but she isn’t at all prepared for what she finds, or for the type of help Johnny Bad really needs. Come along for the hilarious, sexy ride as Jillian and Johnny get caught up in a storm that just might be bigger than both of them. 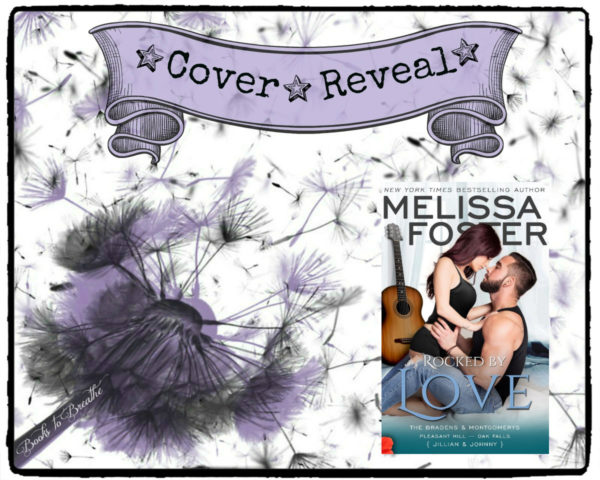 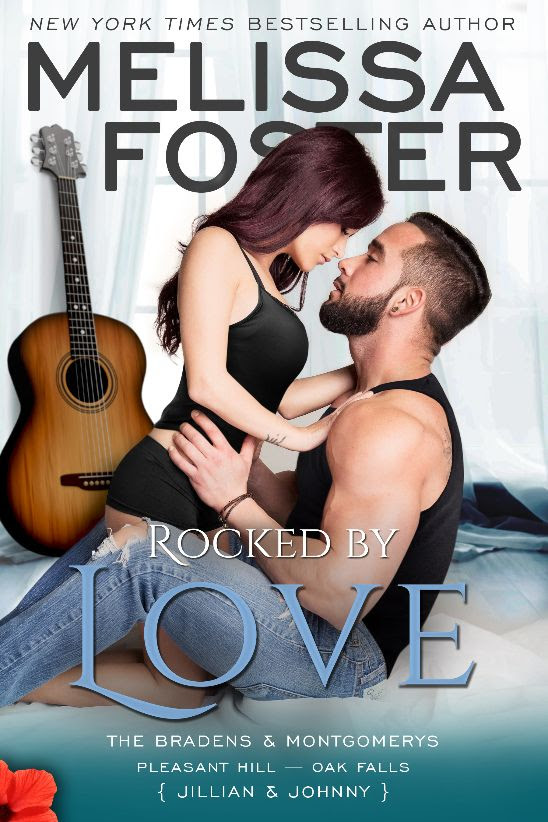 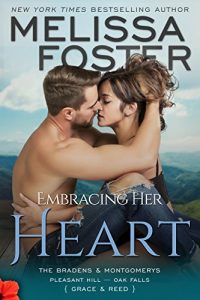 Welcome to Oak Falls, Virginia, home to horse farms, midnight rodeos, bookstores, coffee shops, and quaint restaurants where you’re greeted like family and treated like treasured guests. Buckle up for a wild ride. Like any Southern girls worth their salt, the sweet-talking, sharp-tongued Montgomery sisters can take men to their knees with one seductive glance or a single sugarcoated sentence.

Leaving New York City and returning to her hometown to teach a screenplay writing class seems like just the break Grace Montgomery needs. Until her sisters wake her at four thirty in the morning to watch the hottest guys in town train wild horses and she realizes that escaping her sisters’ drama-filled lives was a lot easier from hundreds of miles away. To make matters worse, she spots the one man she never wanted to see again—ruggedly handsome Reed Cross.

Reed was one of Michigan’s leading historical preservation experts, but on the heels of catching his girlfriend in bed with his business partner, his uncle suffers a heart attack. Reed cuts all ties and returns home to Oak Falls to run his uncle’s business. A chance encounter with Grace, his first love, brings back memories he’s spent years trying to escape.

Grace is bound and determined not to fall under Reed’s spell again—and Reed wants more than another taste of the woman he’s never forgotten. When a midnight party brings them together, passion ignites and old wounds are opened. Grace sets down the ground rules for the next three weeks. No touching, no kissing, and if she has it her way, no breathing, because every breath he takes steals her ability to think. But Reed has other ideas… 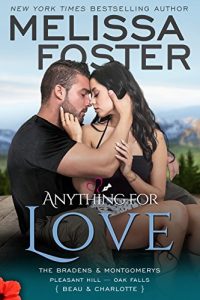 Beau lost his first love years ago, and he’s never let go of his guilt over her death. As he nears the anniversary of his loss, he is on the cusp of becoming the star of a home-renovation reality show. Escaping the painful memories of his past to work at the defunct old inn is just the promise of solitude he needs to clear his head before diving in to the all-too-public career. But he didn’t count on being attracted to the whimsical, adorably sexy innkeeper.

Neither Charlotte nor Beau is looking for an attachment or a fling. But the more they learn about each other, the closer they become. Romantic evenings lead to intimate conversations, and neither can deny their deep connection or the passion it sparks. They’ve never fully healed on their own, but together maybe anything is possible. 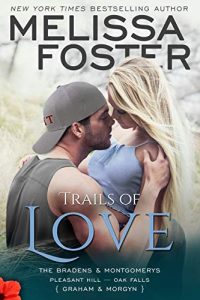 When Graham Braden travels to Oak Falls, Virginia to attend the wedding of his buddy Reed Cross to Grace Montgomery, he sticks around to help with renovations to Reed’s new theater. The last thing he expects is to be asked to assess and possibly invest in Grace’s sister Morgyn’s business endeavor. Graham is a careful, keen businessman, and Morgyn is impulsive, disorganized, and more interested in the energy flow in her eclectic retail shop than in the accuracy of her records. While Graham isn’t ready to open his pockets to the sassy, sexy business owner, he may be ready to open his heart. 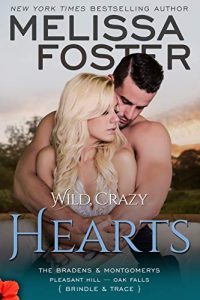 High school teacher Brindle Montgomery and rancher Trace Jericho have been close friends forever and on-again off-again lovers for years. As rebellious as they are stubborn, they’re both perfectly happy with their no-strings-attached hookups. But when Brindle returns from a trip to Paris with a baby bump, it sends Trace’s wild, crazy heart into a frenzy–and Brindle is left wondering if she’s made the biggest mistake of her life. 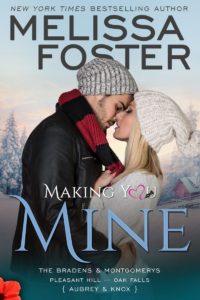 Knox Bentley never liked the pomp and circumstance that came with being wealthy. He’d distanced himself from his pretentious family and their fortune as a young adult and found his own path to success. But even with the world at his fingertips, he realizes something is missing, and after a long stay overseas, he finally knows exactly what it is. His no-strings-attached hookups with Aubrey Stewart, an exquisite and stubbornly independent blonde, are no longer enough for him. They connect on every level, but Aubrey is a fierce businesswoman with a new movie channel on the horizon and no time for much else. She is the deal he can’t close, the precious jewel even his billions can’t buy. Now that he’s back in the States, he’s determined to show her that what they have goes beyond the bedroom and finally make her his. 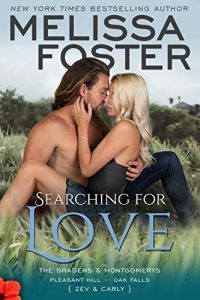 Zev Braden and Carly Dylan have known each other their whole lives. Their close-knit families were sure they were destined to marry—until a devastating tragedy struck, breaking the two lovers apart. Over the next decade Zev, a nomadic treasure hunter, rarely returned to his hometown, and Carly became a chocolatier and built a whole new life across the country. When a chance encounter brings them back into each other’s lives, can they find the true love that once existed, or will shattered dreams and broken hearts prevail? Find out in Searching for Love, a deliciously sexy, funny, and emotional second-chance romance. 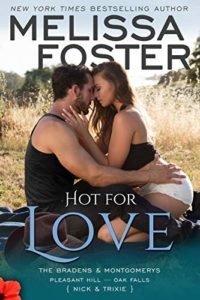 Trixie Jericho is on a mission to start her own miniature horse business. She’s sick of being told her idea is cute and wants nothing more than to be taken seriously. When rancher and sought-after freestyle horse trainer Nick Braden offers an opportunity she can’t refuse, Trixie jumps on it. The problem is, she also wants to jump on him, but the bullheaded, big-muscled, motorcycle-riding cowboy doesn’t mix business with pleasure. Little does he know, Trixie has never backed down from a challenge, especially one she wants more than her next breath. Saddle up, big boy, because this boot-stompin’, risk-taking, Daisy Duke-wearing cowgirl isn’t afraid to play dirty. 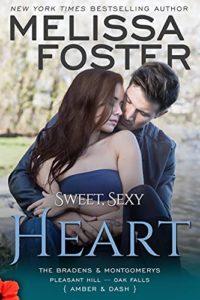 Amber Montgomery is perfectly happy with her quiet life, running her bookstore, taking long walks with Reno, her Labrador retriever seizure-response dog, and spending time with her close-knit family. She’s never needed thrills the way some of her sisters have. In an effort to control her epilepsy, she tries to avoid anything that creates too much excitement or stress—including relationships. When Amber hosts a book signing for famed-athlete-turned-author Dash Pennington, he’s everything she’s spent her life avoiding: loud, aggressive, and far too handsome, as proven by the hordes of women who surround him everywhere he goes. Amber can’t ignore the sparks flying between her and Dash, but this is a no-brainer for her: Ignore their chemistry and hold her breath until he leaves town.

Dash Pennington has spent his life running. Running the ball in for a touchdown, running from town to town to appease his public relations reps, and running into the arms of too many women to count. He’s also an expert at protecting—his reputation, his sisters, and lately, his sanity. But he’s ready to make a change. When he comes to the sleepy little town of Oak Falls, Virginia, and witnesses the most beautiful woman he’s ever seen living the life he craves, she refuses to have anything to do with him. But now that Dash has found the one thing he doesn’t want to run from, he’ll stop at nothing to win her over. 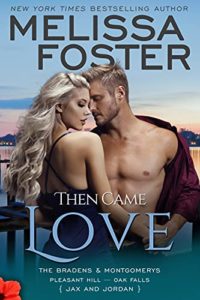 What happens when you find your soul mate but she belongs to someone else?

Months ago, famed wedding-gown designer Jax Braden met the woman of his dreams when a bride-to-be came in for a consultation. He’s tried to move on, but there is no forgetting beautiful, smart, and refreshingly real Jordan Lawler, or the loneliness she cleverly tries to hide. When Jordan hires him to design her wedding gown, Jax knows he’s in trouble, but he cannot walk away. As business meetings turn to late-night confessions, their connection deepens, igniting passion too strong to deny. They’re drawn into an inescapable and forbidden love. Loyalties are tested and hearts are frayed, but neither will cross that invisible line in the sand. Come along for the sexy, emotional ride as Jax and Jordan face their toughest competitors yet—their hearts.