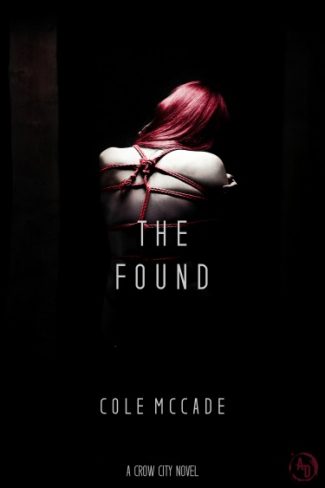 Witness to a murder. Kidnapped by a monster. Life hanging on a whim. Willow Armitage’s world was already falling apart; between getting fired and caring for her chronically ill father, she’s had little room for anything but survival. But that survival hangs in the balance the night she stumbles into a back alley – and watches a stranger die at the hands of the most beautiful man she’s ever seen.

Lethal. Powerful. Unstable. Terrifying. The contract killer known only as Priest is a dangerous unknown, and when Willow wakes tied to a chair in his hideout, the only thing she sees in his fox-gold eyes is death. Yet for Priest, Willow is a dilemma: an innocent, a saint among the sinners he cuts down in the streets of Crow City. His code of honor forbids shedding innocent blood. Releasing her will send her straight to the police. The only answer is a warped game, and his promise: that he will find the darkness inside her, expose it, and prove that deep down, everyone is just as monstrous as he…and just as worthy of death.

Yet he unearths not a monster, but a smoldering and secret desire – one that has always terrified Willow, and may be her undoing. His touch sets her alight. His strength burns through her like flame. And his control melts her each time he binds her virgin body, possesses her, teaches her the strength in weakness and the passion in submission. But that passion may be her damnation, and in the end Willow must choose: Priest’s love, or her own life.

When his every kiss is pure sin…can she resist damnation long enough for Priest to find his way to redemption?

Trigger Warning 18+: This story contains content centered around non-consent, bodily autonomy, sexual assault, bodily functions, and violence. Please focus on self-care above all, and don't be afraid to put the book down if you need to in order to protect yourself. You come first, always. 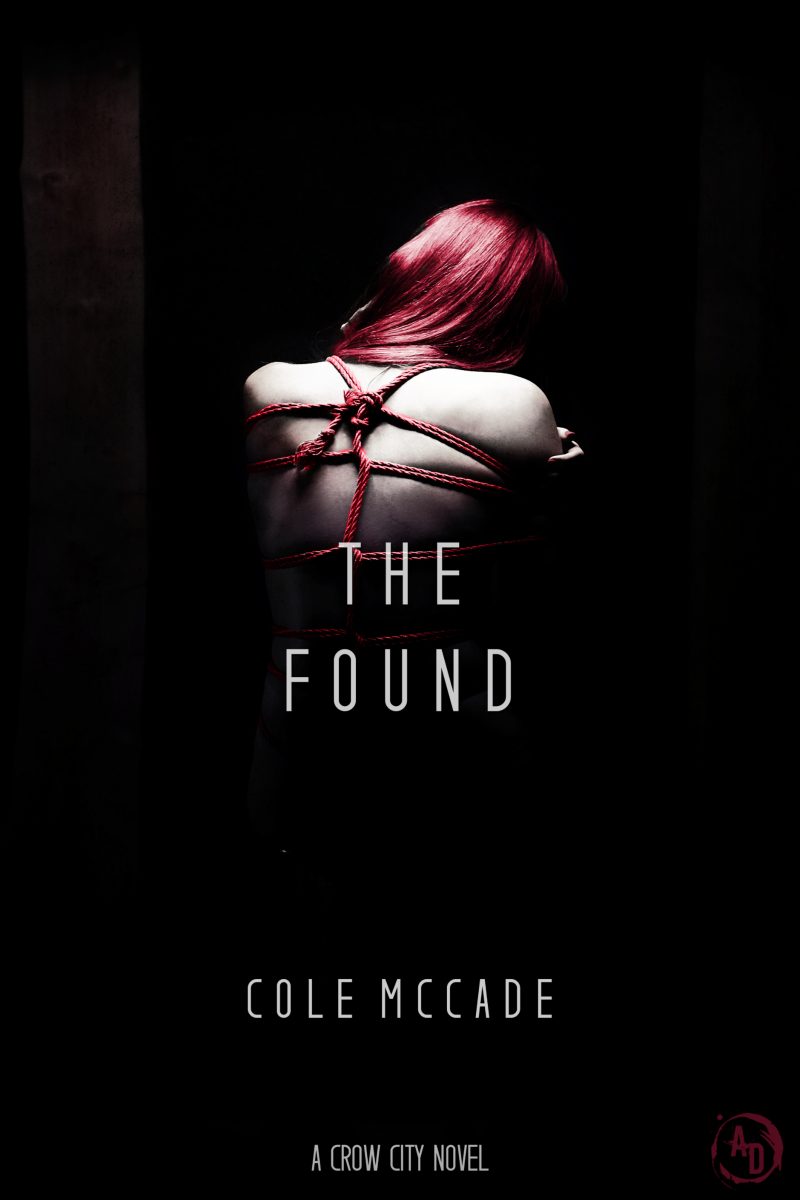 His fingers grazed the curve of her waist. With a gasp, she snapped her eyes open. He met her gaze, fox-gold turned hot as melting amber, fierce and animal and stripping her more bare than that exposed, naked flesh. She felt like a butterfly pinned to a board, held by his gaze, her limbs going slack and her struggles stopping against her will. She hardly felt it, when he hooked a fingertip under the bunched edge of her tank top—then ripped with such effortless strength, the threads of the side seam snapping apart one after the other, until there was nothing left of her tank top but rags of cloth. No, she hardly felt that…but she felt it when he teased those rags from underneath the ropes, as every scrap of cloth stroked and washed against her skin until she was nothing but a trembling tangle of sensitivity and frozen breaths building tighter and tighter in her chest.

And she felt it when that taunting, teasing fingertip hooked in her panties, slipping into the opening just above her thigh, and she realized just what he intended to do.

Suddenly she could move again—and she writhed against the ropes, fighting to squirm away. But she had barely an inch of slack, nowhere to go but against the ropes, hanging in midair and so fucking helpless she would scream with sheer rage if she didn’t want to cry with sheer hopelessness. Was he enjoying this? Enjoying watching her struggle? Enjoying how her skin tightened and pulled and her nipples swelled and her breaths came shallow with every touch, her fucking disobedient body whispering dirty thing, dirty thing, give me more of that dirty thing while her mind and heart screamed no, no, not like that, never like that?

Was he enjoying having her at his mercy, unable to escape his every touch?

His fingers dug into the fabric of her panties. Clenched it against his fist. Pulled. Cloth creased, bit, burrowed into her dirty, dirty thing, her wet dirty thing, her pulsing dirty thing, and she was a fucking dirty thing when she arched off the seat and cried out and whimpered and mewled, as he dragged the cloth against her and all she felt was sweet-rough friction and that slickness, sickness, wet and running like a licking tongue.

“D-don’t,” she cried again, and yet he only pulled harder, the panties so much worse than the rope when every fold and crease molded to her flesh like liquid fire and left nothing untouched. “Don’t!”

He paused, held that steady pressure, keeping her on the end of a taut-stretched wire. “Are you a virgin, firefly?” he growled.

She spat in his face.

Panting, body heaving, she drew back and spat in his face, and watched with a sort of foggy, dazed satisfaction as it landed in a wet streak on his cheek, dripping down his bronzed skin like a tear. He remained unmoved, watching her steadily, waiting, holding her dangling from the one hand as if he hardly felt her weight and those damnable fingers pulling her panties against her flesh.

“My body is not your business,” she hissed.

“Right now, your body is my property.” He slid a fingertip down into the crease between her hip and thigh, the place where the seam of her panties normally cut in whenever she sat, moved, shifted; there was something too personal about that touch, so close and yet so far, a threat that made her shrink back even as that feeling inside her nearly exploded, that hollow feeling that seemed like a rapacious beast, a dragon with an open maw and empty gullet that was hungry, so hungry to be full. “I want an answer.”

He bunched her panties into his hand again, curling the fabric in stretched wrinkles against his palm—and this time when he pulled he gave no quarter, a single sharp rip and a sound of cloth tearing like tape pulling off the spool, high and shrill. There was a moment’s painful bite, a muted cry welling in her throat, and then the pressure eased as the tatters of her panties fell, forgotten, to the floor.

Still he watched her. And she, naked with nowhere to hide, curled into herself; she felt her nudity like a presence, like a thing touching her and twisting over her flesh to force her to feel every moment of her exposure, every moment of her vulnerability and helplessness. Priest said nothing. He didn’t need to. He never needed to. When he wanted an answer, he got one, and would wait her out as he had before, implacable and unmoving and relentless. She had always imagined men like him to be all force, all bluster, all violence and snarling and threats.

She was quickly learning that silence—silence and careful, metered application of just enough strength to drive his point home—was just as effective as force.

And just as frightening.

Dangling from his grip like a puppy, she hung her head. Anything not to meet those piercing eyes; anything not to feel the shame of giving in to the quiet demand in his gaze; anything to make this end, so he would stop tormenting her and leave her alone.

“…yes,” she mumbled. Still he didn’t speak, or put her down. Defeat sparked into frustration, and she glared at him from under the fall of her hair. “Yes, all right? Are you happy? Is that what you fucking wanted to know?”

“Yes,” he said simply, and lowered her to the floor. 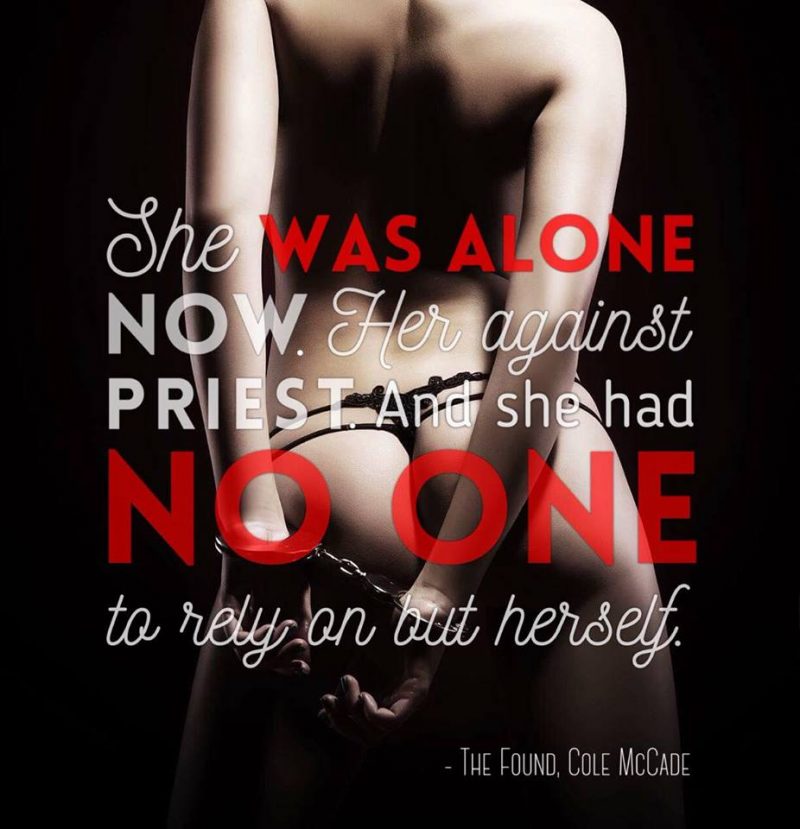 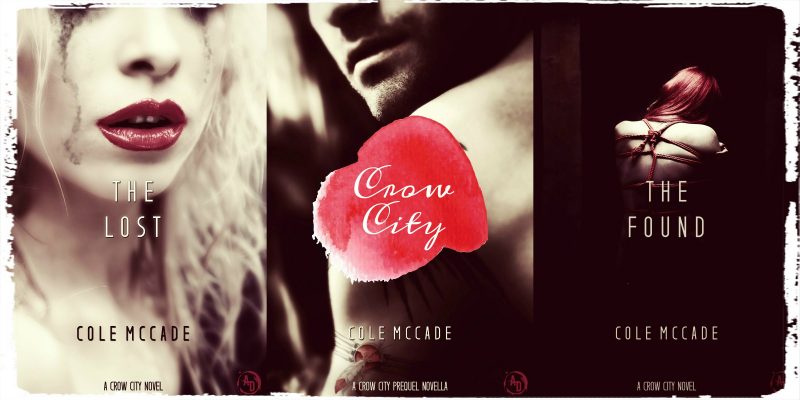 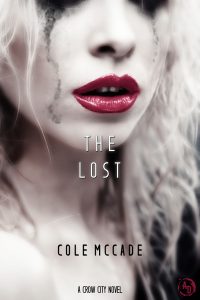 The first book in the new Cole McCade: After Dark erotica imprint; a darkly haunting erotica with the taboo appeal of VC Andrews.

There’s something wrong with Leigh.

She’s known it her whole life. She knows it every time she spreads her legs. Every time she begs for the pain, the pleasure, the heat of a hard man driving deep inside. She’s a slave to her own twisted lusts–and it’s eating her alive. She loves it. She craves it. Sex is her drug, and she’s always chasing her next fix. But nothing can satisfy her addiction, not even the nameless men she uses and tosses aside. No one’s ever given her what she truly needs.

Cold. Controlled. Impenetrable. Ex-Marine Gabriel Hart isn’t the kind of man to come running when Leigh crooks her pretty little finger. She loathes him. She hungers for him. He’s the only one who understands how broken she is, and just what it takes to satisfy the emptiness inside. But Gabriel won’t settle for just one night. He wants to claim her, keep her, make her forever his. Together they are the lost, the ruined, the darkness at the heart of Crow City.

But Leigh has a darkness of her own. A predator stalking through her past–one she’ll do anything to escape.

Even if it means running from the one man who could love her…and leaving behind something more precious to her than life itself. 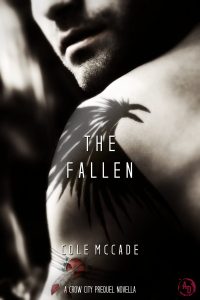 Reconnect with Gabriel, Gary, Maxi, and Crow City in this free companion novella (Crow City #1.5) telling the story of The Lost’s Gabriel Hart before Leigh entered his life–and get a sneak preview of the sinister Priest, hero of The Found.

Gabriel Hart is a broken man.

And everyone close to him dies.

His military unit. His sister. His parents. Everyone he’s come to care for has been taken from him, leaving him with nothing but a crippling war injury, a Vicodin addiction, and a scraggly, chewed-up rag of a cat. It’s enough to make anyone want to check out. And when he holds his service pistol in his hand and presses it against his temple, for the first time in a long time the world feels right.

But he’s not as alone as he thinks. And when grizzled bar owner Gary challenges him to honor his sister’s memory by repairing her houseboat before he gives up on life, he discovers she left more for him than her belongings. And her letters lead him on a trail through discovering himself, discovering what he truly wants…and discovering that he has the strength to choose his own path.

Cole McCade is a New Orleans-born Southern boy without the Southern accent, currently residing somewhere in Seattle. He spends his days as a suit-and-tie corporate consultant and business writer, and his nights writing contemporary romance and erotica that flirt with the edge of taboo—when he’s not being tackled by two hyperactive cats.

He also writes genre-bending science fiction and fantasy tinged with a touch of horror and flavored by the influences of his multiethnic, multicultural, multilingual background as Xen Sanders. He wavers between calling himself bisexual and calling himself queer, but no matter what word he uses he’s a staunch advocate of LGBTQIA representation and visibility in genre fiction. And while he spends more time than is healthy hiding in his writing cave instead of hanging around social media, you can generally find him in his usual haunts.