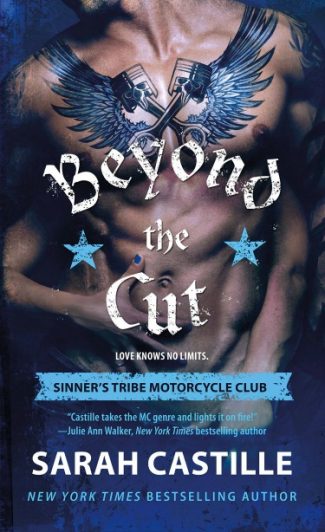 SHE’S HOLDING ON TIGHT.
As a teen, Dawn ran from a life on the streets straight into the arms of Jimmy “Mad Dog” Sanchez, a biker who promised to be her knight in shining armor. But his love was just another cage. Years later, Dawn’s former life still has its hooks in her and she’ll do whatever it takes to break free. When Cade “Ryder” O’Connor, a member of a rival club, makes her an offer, Dawn finds herself in a different, hotter kind of trouble with one irresistible Sinner…

WILL HE GIVE HER THE RIDE OF HER LIFE?
Cade is an outlaw biker with allegiance to one thing and one thing only: The Sinner’s Tribe Motorcycle Club. But when it comes to the stunningly sexy, fiercely independent Dawn Delgado, Cade finds himself…hungrier for more. Trouble is on Dawn’s heels and he wants to be the answer to her prayers, whether she wants him to be or not. What can’t be denied is the red-hot attraction between them. However, as they fall deeper, the danger rises and Cade may have to sacrifice it all…

Meet Cade & Dawn in Beyond the Cut on June 2nd! 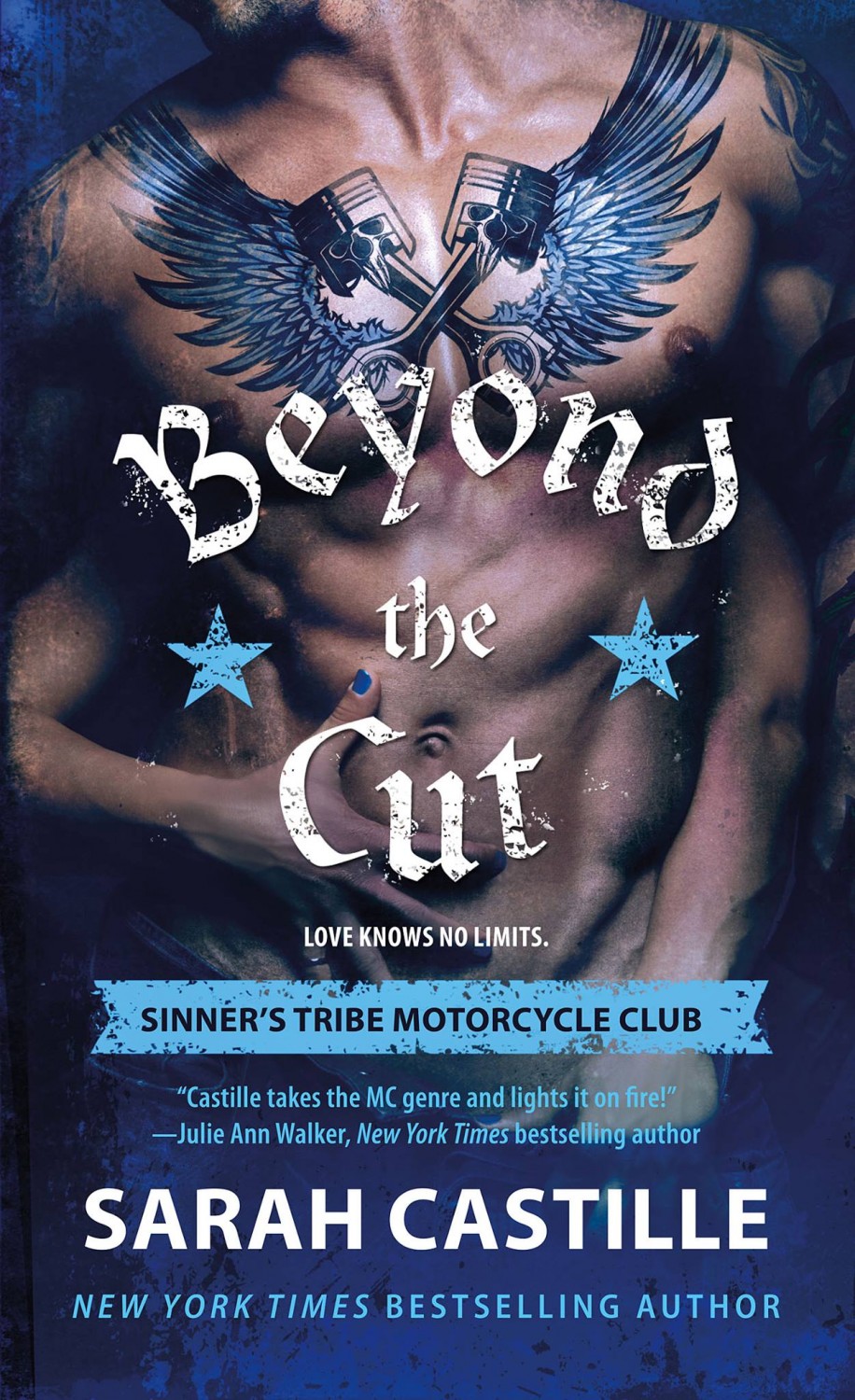 “Dawn, babe. You are so beautiful you could make a priest sin.”

“Good thing then I already have a Sinner.”

When his palm cupped the smooth perfection of her breast, and his thumb brushed gently over her taut, rosy nipple, he couldn’t hold back. With a groan, he eased her back on the desk, wrapping her legs around his hips.

“Touch me,” she whispered.

His body shook like it was his first time, like he had at the age of fourteen when he discovered he could lose himself in a woman’s embrace and the shouting and crying and screaming he heard at home would fade away beneath moans and whimpers of desire. He couldn’t stop the pain, but at least he could give pleasure.

He cupped her breast in his hand, tugging down her bra to take her nipple in his mouth.

“Oh God.” Dawn arched off the desk, offering him more. Her hands slid over his chest, sending wave after wave of heat down to his cock. Unable to stop himself, he ground his erection against the curve of her sex until he was on the verge of spilling himself like a teenage boy.

Her hips rocked against him, her heels digging into his back. With her head thrown back, her hair spread around her in a golden wave, she was a goddess, devastatingly beautiful, irresistibly wanton . . . and his.

Mine. Overwhelmed with a need to claim her, he grasped the edge of her panties and eased them over her hips, sliding them over her lean legs and off. Too pretty to tear away.

He heard her gasp, and if he hadn’t been so wound up, he would have savored her, licked the salty sweetness from her skin, and teased her nipples until she writhed beneath him. But that was for another time. Another place. A night when they weren’t the guests of honor at their own party and everyone would be wondering where they were. Now was about sex. Rough and raw. Pure and primal. Now was about making her truly his.

“Are you wet for me, babe?” His hand dropped to his belt and he worked at the buckle.

“Are you hot?” The buckle gave way and he tore open his fly.

“Legs on my shoulders.” He pulled a condom from his pocket and ripped it open with his teeth, then sheathed himself as she positioned herself, calves on his shoulders, her glistening pussy wet and inviting.

He entered her with one hard thrust, his hands around her thighs, holding her in place. Dawn arched against him, rocked into his rhythm, her hands clenched tight on the lip of the desk.

The desk squeaked across the floor as he hammered into her. When he felt the little quivers in her sex that told him she was close, he traced his thumb over her clit, spreading her moisture up and around until her legs tightened around him and her heels dug into his freshly dressed wound. Pleasure-pain suffused his body and he felt a familiar pressure at the base of his spine.

“Hey you two,” Tank yelled. “Come outta there and join the party, or else we’re coming in.”

Cade heard laughter and the sound of voices. His cock throbbed so painfully his eyes watered. “Fuck off.”

He thrust deep and Dawn’s back arched. “Oh God. So close. Make them go away.”

“Pleasure.” Cade reached across the desk for his gun. Sex with his old lady was serious business. Not to be disturbed. Especially when he was so damn close he had to grit his teeth against the pain.

He fired at the door, aiming his shots at the ceiling. A woman screamed. The brothers gathered outside the door roared with laughter.

“Catch you at a bad time, brother?” Sparky shouted. “We need to know if you’re fighting at the next fight.”

“This is worse than a civilian wedding,” Dawn muttered. “Although we’re supposed to be in a fancy hotel room when we’re hazed.”

Cade placed the gun on the table beside her. “My woman doesn’t get interrupted when she’s about to come.”

“Fucking me is not humiliating. Most of the girls out there would die to take your place.”

Dawn glanced from side to side, taking in the dingy room, and then laughed. “First of all, I am reassured that you do not suffer from a lack of self-confidence. Second, how about you get on with the program. Since they all now know what we’re up to, we might as well enjoy it so I can lord it over all those girls who are dying to take my place. And third, if you do any more shooting, someone probably will die.” 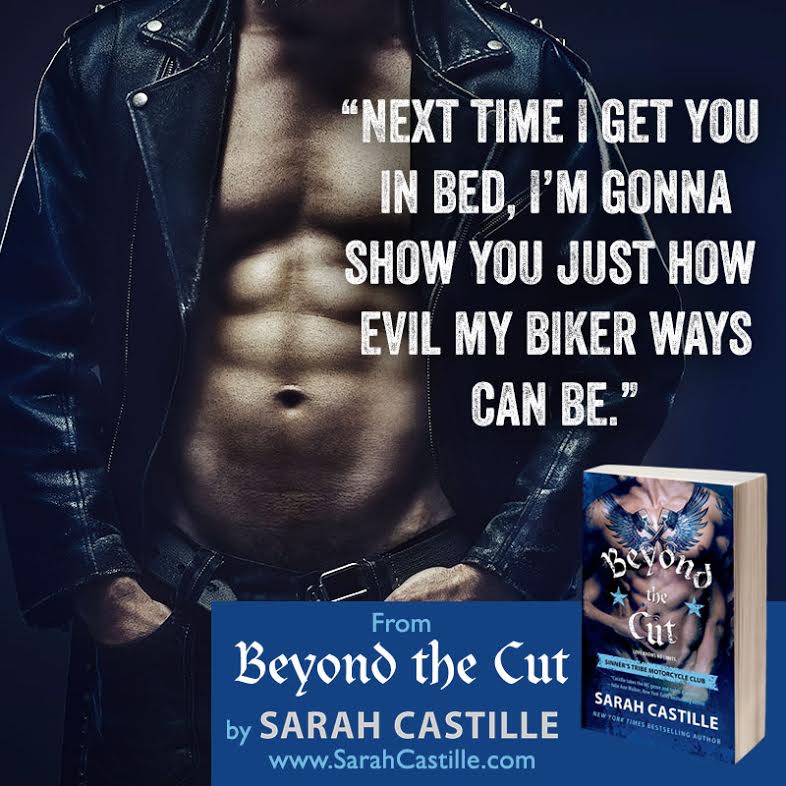 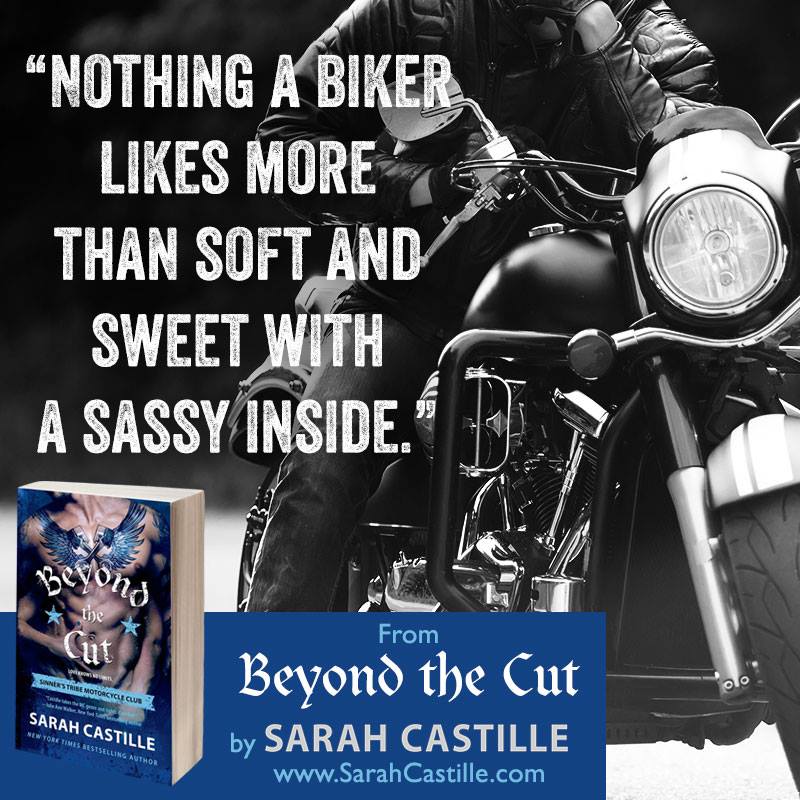 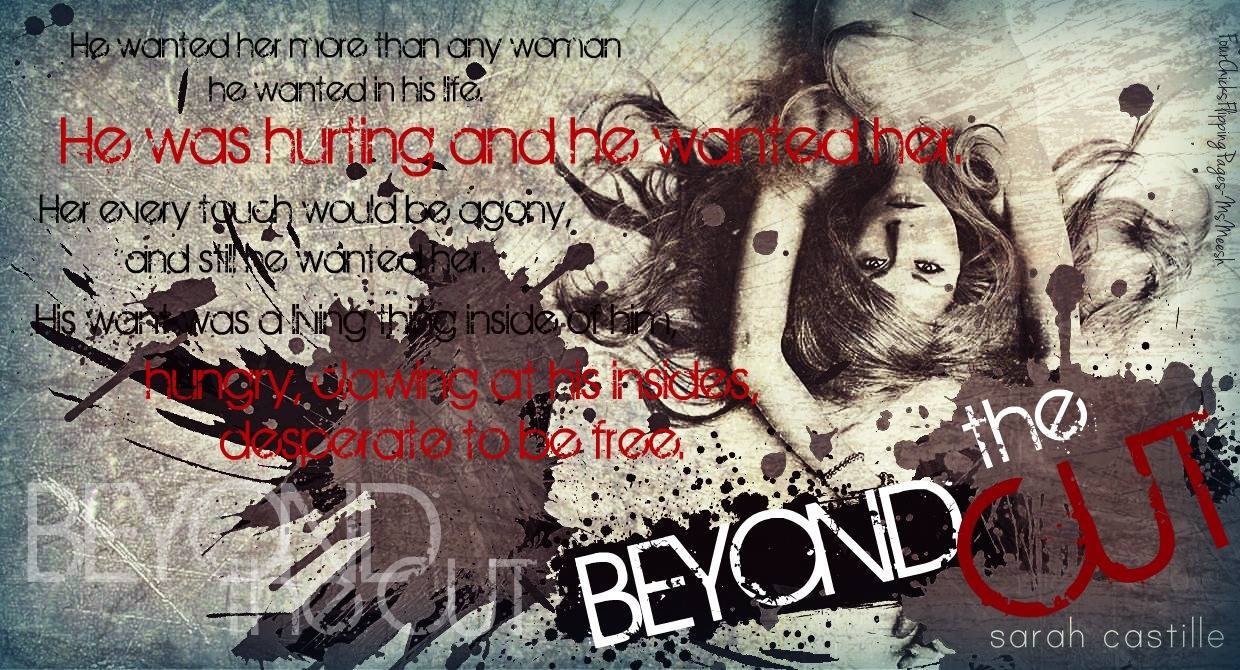 IT TAKES A GOOD, STRONG WOMAN

TO TAME A MAN WHO’S HELL ON WHEELS. 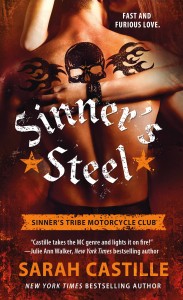 HE’S HELL ON WHEELS.
Tall, dark, and dangerously handsome, Zane “Tracker” Colter is the strong, silent type of tattooed muscle biker who drives women wild. But as a master of strategy for the outlaw MC club, Sinner’s Tribe, he doesn’t have time to play around with groupies and biker chicks-especially when he can’t stop thinking about Evie, the girl who got away…

SHE’S PLAYING WITH FIRE.
Evie’s been in love with Zane ever since they were children-until he broke her heart and disappeared. Now he’s back in her life, bigger and badder than ever. Zane is stunned by how beautiful and confident Evie’s become, using her artistic talent to customize motorcycles. He wants her so bad, he’d ride through fire to win her back. There’s one problem: Evie is dating his deadliest rival-the leader of the Black Jacks-and if Evie and Zane hook up, there’ll be hell to pay…