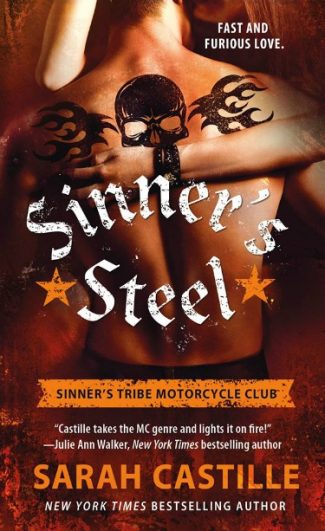 Tall, dark, and dangerously handsome, Zane "Tracker" Colter is the strong, silent type of tattooed muscle biker who drives women wild. But as a master of strategy for the outlaw MC club, Sinner's Tribe, he doesn't have time to play around with groupies and biker chicks-especially when he can't stop thinking about Evie, the girl who got away...

Evie's been in love with Zane ever since they were children-until he broke her heart and disappeared. Now he's back in her life, bigger and badder than ever. Zane is stunned by how beautiful and confident Evie's become, using her artistic talent to customize motorcycles. He wants her so bad, he'd ride through fire to win her back. There's one problem: Evie is dating his deadliest rival-the leader of the Black Jacks-and if Evie and Zane hook up, there'll be hell to pay... in Sinner's Steel. 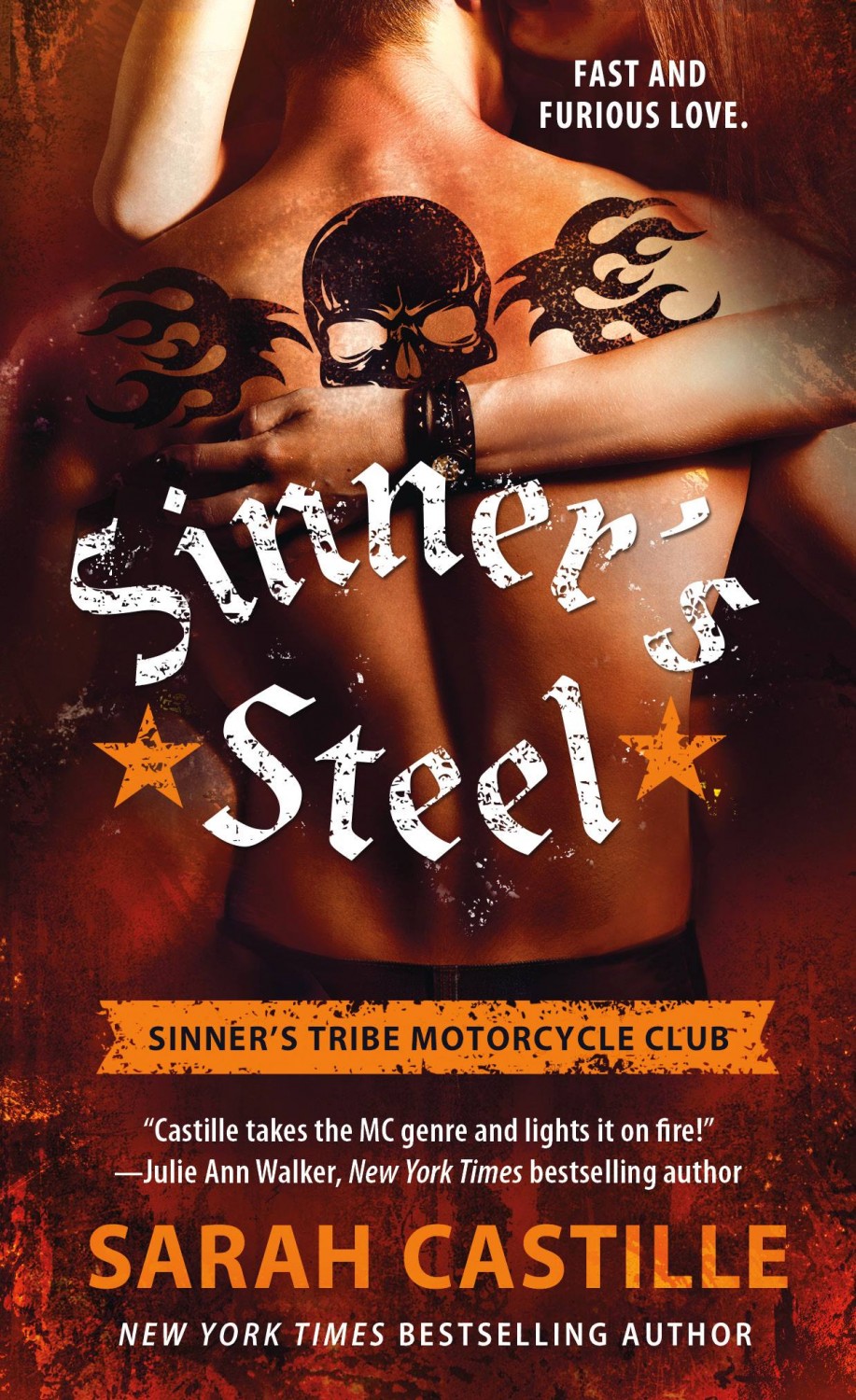 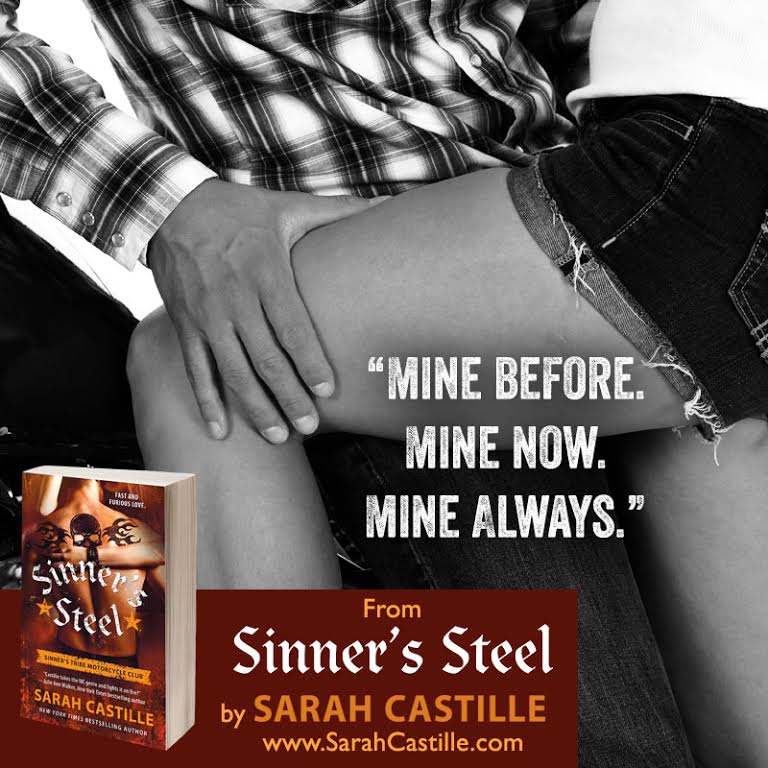 “Take off your clothes.” Evie leaned against Zane’s bedroom door, more for support than a means of escape.

A growl curled in her throat, her anger growing as she realized this was the beginning of the end. Once she saw what was under his shirt, there would be no going back. “Take them off. I want to see what he did to you.”

He pulled his shirt over his head and tossed it on the bed, then he stripped down to his boxers. Her legs trembled as her gaze swept over his body, starting at his feet, her strength leaving her as she took in the discolored skin on his shins and thighs, the cuts on his wrists, and then gave out when she saw the full extent of his bruised and lacerated torso.

She sank down to the floor, wrapped her arms around her legs and buried her head and sobbed, the grief ripping her apart inside. Tears spilled down her cheeks dripping on the floor with each ragged inhale. She cried not just for him, but for them, and the knowledge they could never be together.

“Fuck.” Zane’s voice was harsh, raw as he crossed the room to kneel beside her. “Sweetheart, it’s not as bad as it looks.”

She shook her head, held herself tighter, unable to speak for the images spinning around in her mind. Jagger had no bruises on his body. That guilty look on his face when he’d come into the shop . . . the marks on Zane’s wrists.

“Let me explain.” He cradled her in his arms, as if she was the one hurting. She supposed, in a way, she was.

“There’s nothing to say that could make this acceptable to me.” Evie sniffed back her tears. “I can’t do this, Zane. Seeing you like this is tearing me apart. I’ll never be able to forgive Jagger, never forget what he did to you. I won’t even pretend to understand how you agreed to it. The fact that you live in a world where this kind of thing goes on is bad enough, but on top of it . . . your patches . . . blood . . .”

“I’ll leave.” Simple words and yet they weighed heavy on her heart.

“I don’t want you to leave.” She held herself stiff, afraid to touch his battered body. “This club means everything to you. That you would take that beating from your best friend tells me how much you love this life. You would hate me every day for taking you away from it.”

“I love you more,” he said. “I have always loved you. I’ve lived my life in the shadows because I couldn’t let you go.” He drew in a ragged breath, brushed his lips over her hair. “I can’t lose you now. I went looking for Viper because I couldn’t bear to lose you.”

She struggled to sit, pushed herself to standing. “I can’t bear the thought of losing you either, but I don’t even know who I am anymore. All I know is that I’ve been stupidly naive, and this life you lead isn’t for me. I want to be with you, but I don’t see how this can work.”

His face smoothed, eyes darkened. Even now she knew him so well, she could see his emotional retreat.

She closed her fist and hit it to her breast, her eyes stinging with tears all over again. “It hurts me to see you in pain. It hurts me to think of you suffering. It hurts me to think of you in such danger that you have to take a life. I’ve spent my whole life hurting because I wanted you and couldn’t have you. I just can’t take the hurting anymore. I love you, Zane, but it hurts just too damn bad, and now you’re taking risks for me that could get you killed. I don’t want that. Even if we can’t be together, I need to know you’re alive and happy and doing what you love to do.”

His voice, when he spoke, was thick with pain. “You want to walk away? What about Ty?”

“I don’t know.” God, why couldn’t she stop crying? “I need some time to think about it. He adores you. He’s so happy to have you in his life, I can’t take that away from him.”

She turned, reached for the door, but it felt too wrong. Unfinished. There was something she needed to do.

“Will you let me do something for you before I go?”

She gestured to his bruised, battered body. “You did this for me. I want to give something back. I want to take care of you so when I leave I’ll know you’re going to be okay.”

His life was all about pain.

And yet the pain in his body was nothing compared to the pain in his heart. Zane’s hand clenched on his breast. If he could rip his damn heart out of his chest he would. Go back to the darkness that had sustained him for the last nine years, back to the shadows. Out of the damn light.

He heard the rush of water in the shower from the en suite bathroom, a luxury afforded only the senior patch brothers who kept rooms at the clubhouse, but he couldn’t go in. He was too wound up, too out of control, too damn emotional.

What else could he do? He had meant every word when he told her he would fight to be with her. He just hadn’t realized she would be the one standing in his way.

With a roar, he thudded his fist against the wall. His hands were about the only place on his body that wasn’t bruised. Might as remedy that problem because he had saved them for nothing.

When he felt no release from his assault on the wall, he ripped a drawer from the dresser and smashed it on the ground. Clothes flew across the room and the wood cracked and splintered. Like his heart.

But now that the floodgates had opened, he couldn’t stop. He lifted the drawer and smashed it down again, his aching muscles protesting the impact. “Do you want him, Evie? Is that it? Is that what this is all about?” He knew it was ludicrous. She had seen who Viper was, but he needed a reason, something he could change.

“No, baby. You know that’s not true. Now come let me wash you and look after those cuts and bruises.”

Smash. Smash. Smash. He tore the drawer apart. He loved her compassion and yet he hated it if it meant the last time he touched her he would be in pain.

“I’ll shower with you so I can look after you properly.” She clasped the bottom of her T-shirt and tugged it over her head. Zane froze mid-strike, his primal instincts sharpening at the sight of her skin and her beautiful breasts encased in blue satin.

“I don’t want your help.” He threw the remnants of the drawer across the room.

“Too bad. And if you can’t it for you, then do it for me.” Evie undid the bra and tossed it on the bed with her shirt. “It will make me . . . feel better.” She slid her jeans and panties over her hips and then kicked them off. Gloriously naked, quietly confident, undaunted by his rage, she turned into the bathroom. “Come on.”

Zane’s body shook, torn between going after his woman and unleashing his frustrations on the rest of the furniture.

Don’t go in. He knew what would happen if he followed her, and it wouldn’t involve standing still while she treated his wounds. And with his heart raw and exposed, he didn’t think he could handle that level of intimacy without totally losing control. With a growl, he ripped out another drawer, and hammered it against the wall until it shattered, pieces flying in all directions. Exhausted, he sank down on the bed, the ruins of the drawers scattered at his feet, his muscles quivering at the exertion. He could hear the shower behind him, feel the breath of steam, smell the floral fragrance of shampoo.

Overwhelmed with the need to touch her, he stripped off his clothes, all thoughts of staying away forgotten beneath the desire to hold her in his arms one last time.

Evie turned when he stepped into the shower, rivulets of water streaming over her beautiful body. “Took you long enough. Did you break all the drawers?”

Words deserted him. He took her in his arms and held her against him.

“It’s okay,” she murmured against his chest, her arms tightening around him. “We’ll be okay.”

He didn’t know how long they stood under the warm water, but his heart finally slowed its frenetic beat and the tension eased from his body.

“And you’re mine. That won’t change.” She slid her hands up his chest ever so gently to circle his neck.

She was right about that. Nothing wouldn’t change. He would find a way. He would fight for her until he couldn’t fight anymore. 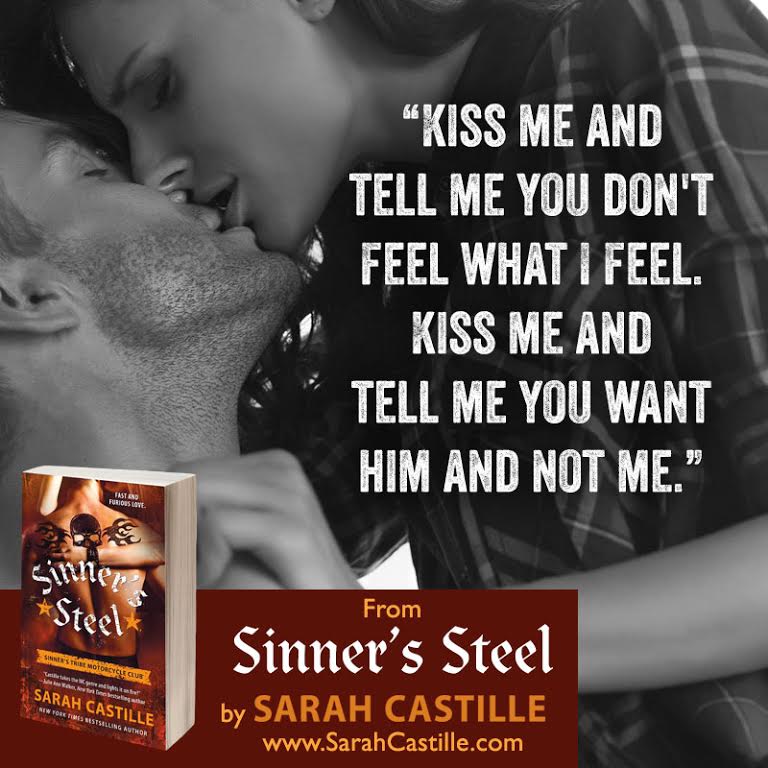 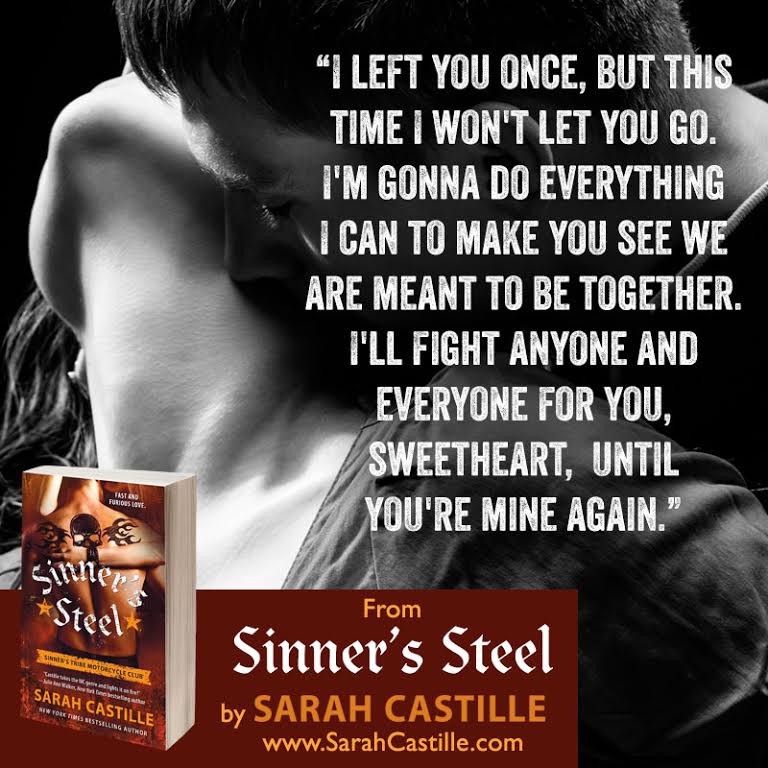 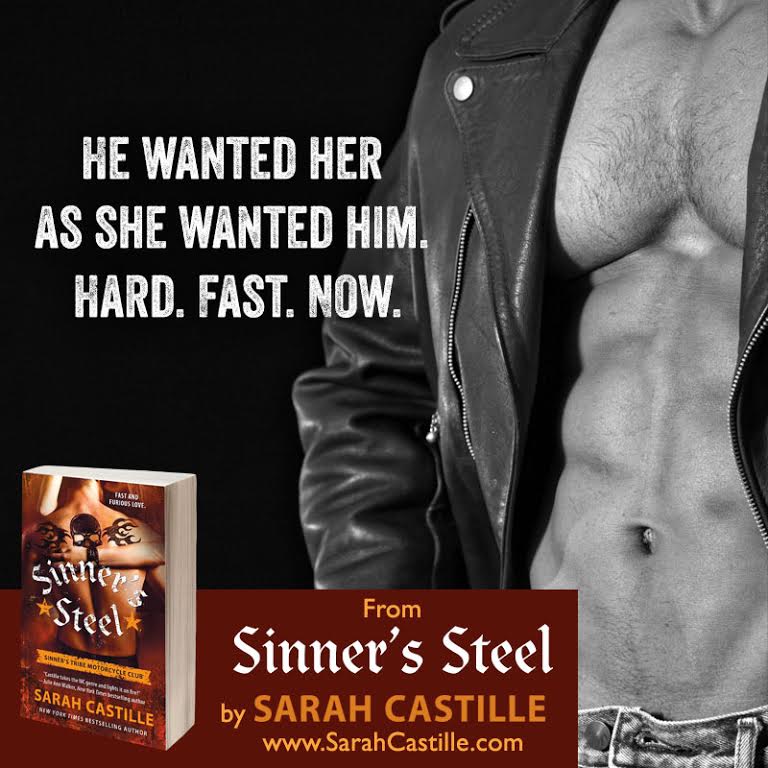 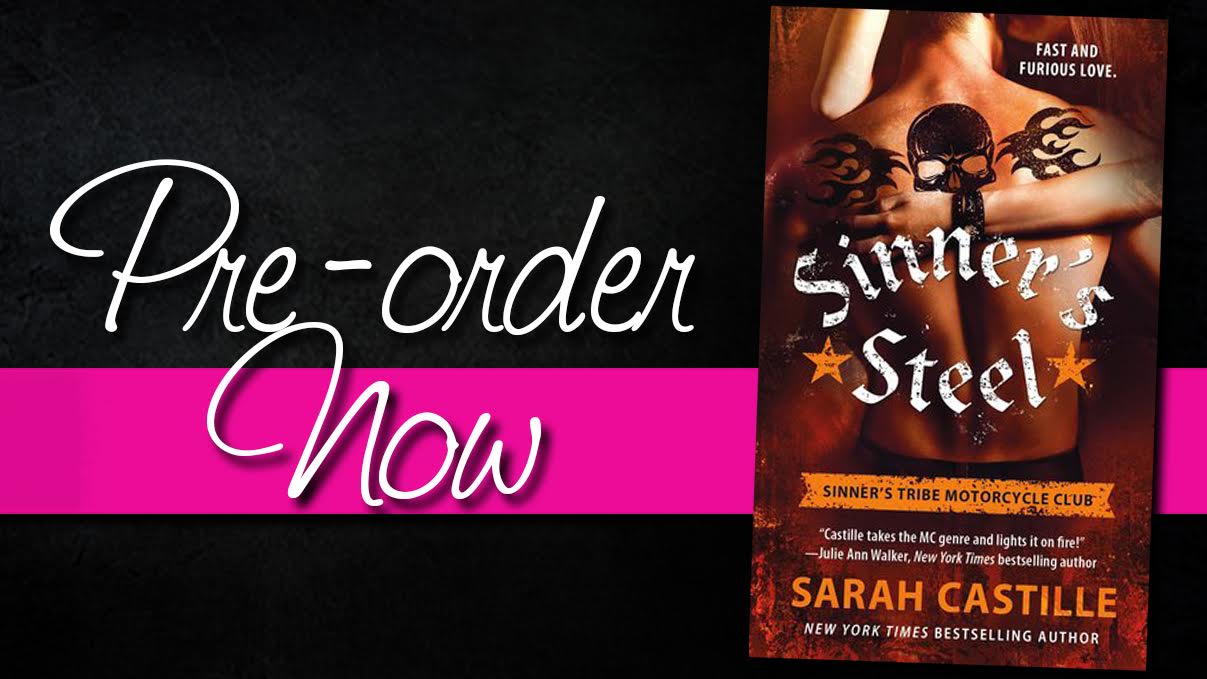 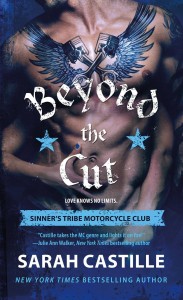