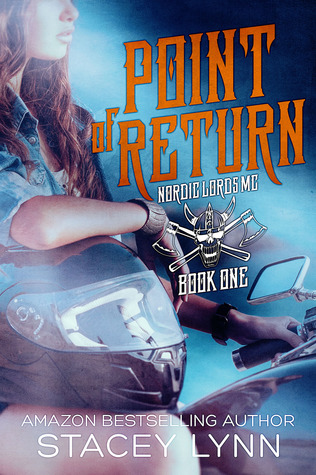 Deceit.Destruction.Death.Olivia Masters grew up familiar with all of them. The daughter of the President of the Nordic Lords Motorcycle Club, Olivia always knew she wanted nothing to do with any of it. Her plans were made to leave the town she grew up in as soon as she and her boyfriend, Daemon Knight, turned eighteen.But then Olivia was shot. Her mother killed in front of her. Fleeing became her reality.Forced to return to her hometown of Jasper Bay five years later, events beyond Olivia’s control put her directly back into the life she swore she’d never return to.Her dad wants her back in the family. Daemon wants her in his bed.But just as Olivia begins to accept her destiny, history finds a way to repeat itself.This time, will Olivia be strong enough to fight for the family she once turned her back on? Or will she once again flee from the only life that has ever felt like home?

“You were attacked outside your place last night, Liv. Did you think I’d leave you here alone?” Shit. She probably did. Liv had an amazing ability to assume the worst in me and then run four hours away.

She laid back down on the bed, slowly this time, and closed her eyes. “My head freaking kills.”

I stood up, walked the short distance to an area that couldn’t exactly be called a kitchen because it only had two feet of counter space above the dishwasher and hunted through her three cupboards.

I bit back a laugh when I saw her food cupboard. All the food and boxes were arranged in sizes, largest to smallest, and her cans were alphabetized. Only Liv could be OCD about her fucking food. Finding the pain meds and the coffee, I started a pot and then took Liv a bottle of water from the fridge and held out some medicine. When I reached the side of her bed, she opened her good eye, keeping a hand over the other.

She stared at my hand like it could bite her before she finally took them and the water, taking large swallows of the water.

“This is all your fault, you know.” She laid back down and closed her eyes again. My fingers clenched into tight fists at my side.

“How do you figure?”

She snorted. “Please. I’m back in this town for a few weeks and I’m attacked. How could it be anything but your fault? Or the clubs?” I watched her turn her head away from me and her body shivered slightly. It wasn’t from the cold. It was fear. I’d seen enough people terrified of me in my short life with the club to read the body signs when I saw them.

She shrugged a shoulder against her sheets.

“I don’t know. But the man told me my boys had bit off more than they could chew and I had to tell them they were coming to collect. Or else he was coming back for me.”

Rage. It boiled inside of me from the depths of my gut and kept boiling until I thought it was going to bubble over. I placed my fists on the edge of her bed and leaned over her.

“Tell me,” I clipped harshly. I saw her flinch and tried to take a deep breath but I couldn’t. Who in the fuck would threaten Olivia? Anyone who knew shit knew she’d left the club and town years ago. She wouldn’t know dick about us. “Tell me exactly what he said to you.”

Swear to God, she rolled her eyes at me. I wanted to snap at her. And then I wanted to finish leaning down, close the space between us and kiss the ever loving shit out of her. Olivia had been my first girlfriend. My first kiss. My first time. I had promised her the world and then in one night, everything went to shit. She had run, I had taken my place where I needed to take it, and not a single fucking day had gone by where I wished I could go back and make her listen to me. Let me explain everything I was doing and why I was doing it.

My name rolled off her tongue sounding as sweet as it always did. I took a deep breath, exhaling slowly through my nose. It wasn’t to calm the anger still pulsing through my veins. It was to remind my dick to settle the fuck down. Liv in a bed in front of me, inches from me, and I couldn’t touch her. It was sweetness and torture at the same time.

I nodded and took a few steps back. “Pack a bag.”

Her mouth fell open. “What?”

Slowly, she sat up. I watched the sheet fall from her chest. She was in a t-shirt and shorts. I knew that because Doc had changed her when she was unconscious. I had wanted to bite his fingers off. But I still watched her chest rise and fall while she took long, slow breaths. She fisted the sheet in her lap for a beat before she threw it back and swung her legs to the floor.

“I’m not going anywhere with you.” She stomped to the kitchen. I watched her favor her left ankle so I closed the space between us, wrapped my hands around her biceps and picked her up.

“Sit down,” I told her, depositing her onto a couch that looked like the threads were going to disintegrate at any possible second. I cringed thinking of the shit place Liv was living in. All because of her damn pride and fear. “Your ankle hurts, your head is a mess, and you shouldn’t be walking.” I put my hands on my hips as she glared at me. Bright brown eyes stared right back at me and I almost grinned. Sexy. Liv was hot in high school. She had always been cute but once she turned fifteen and started growing hips and a chest she was the hottest thing I’d ever seen. Five years hadn’t changed that one bit. But Liv angry? When she got pissed she was a wicked goddess. “Now, what do you want?”

“For you to leave and never speak to me again.”

“From the kitchen,” I bit out.

She sighed and fell back into the couch, giving in. “Coffee.”

Also when Liv was angry, she could be annoying as fuck. Stubborn to her bones. She was Bull Masters daughter after all. He hadn’t become President of the Nordic Lords Motorcycle Club by being a pushover. Clearly he had passed on his stubbornness.

I filled her a cup of coffee, black like she’d always taken it in the past, and brought it to her. When she took her first sip, I turned around and adjusted my dick so she didn’t see how turned on I was by watching her lips wrap around the edge of the hot pink ceramic mug.

Then, in order to keep distracting myself, I dug a duffel bag out of her small closet and began throwing in her clothes.

“Packing you up.” I heard a huff of anger and grabbed my cell phone from my back pocket and dialed my best friend, Jaden. “Need my truck,” I said as soon as he answered, which was on the fourth ring.

“Good morning to you, too.”

“Don’t have time for shit, Jaden. I’m at Liv’s place and I’m packing her up and taking her to mine. I need my truck.”

Silence filled the other end of the line.

“I’m here. I think. Am I drunk or still sleeping?”

I laughed once, and then I caught sight of Liv’s black eye and felt my rage begin to boil all over again. My eyes narrowed and I watched her flinch. “I need my truck and I need it in ten. I’ll explain when you get here.”

“Shit.” He pulled the word out four times longer than it was.

“Yeah, it is. Be here in ten.” I shut the phone and slid it back into my pocket before I turned to Liv. She was still sitting in the same spot, holding her coffee cup with both hands.

“I’m not going to your place.” She blinked and I saw her flinch in pain from the small movement. I also noticed that she was sitting strung tight into the couch. Every muscle in her body looked coiled tight and stiff. Stubborn as hell.

“I know how to take care of myself.”

“You’re the daughter of the President of the MC and you were attacked last night.”

“I know who I am.” There was a fire in her when she bit the words out.

“Do you?” I clipped and watched her flinch at not only my tone, but what I implied. Five years ago, Liv had run. She had her reasons, but her reasons were shitty ones.

“You can go now.” Her words were just as tightly clipped as mine. I rolled my shoulders back, releasing tension building from the stubbornness she was showing me.

“You got a man?” I already knew the answer. What Liv didn’t know was that we’d had eyes on her as soon as she naively and innocently stepped back into town. If she had a man, I would have known. If she had a man worth a shit, she would have called him for help last night instead of Doc. “Right, then.” I clipped when she didn’t answer. “You don’t have someone to watch you and you’re gonna need that. I don’t know who said that shit and shoved you into a cement wall, but I’m guessing they were serious as hell about coming back for you. And your security in this building is complete shit. So until we figure out who did this to you and why, you’re coming to my place or the club. Which is it?”

The space between us was maybe five feet. The tense silence made it feel like fifty. She didn’t say anything so I turned around and kept packing.

“Your place,” she finally muttered. It was quiet and I could tell it wasn’t anything close to what she wanted. I also knew Liv wouldn’t step back into the club without a miraculous act of God occurring so the choice I’d given her really wasn’t any choice at all. 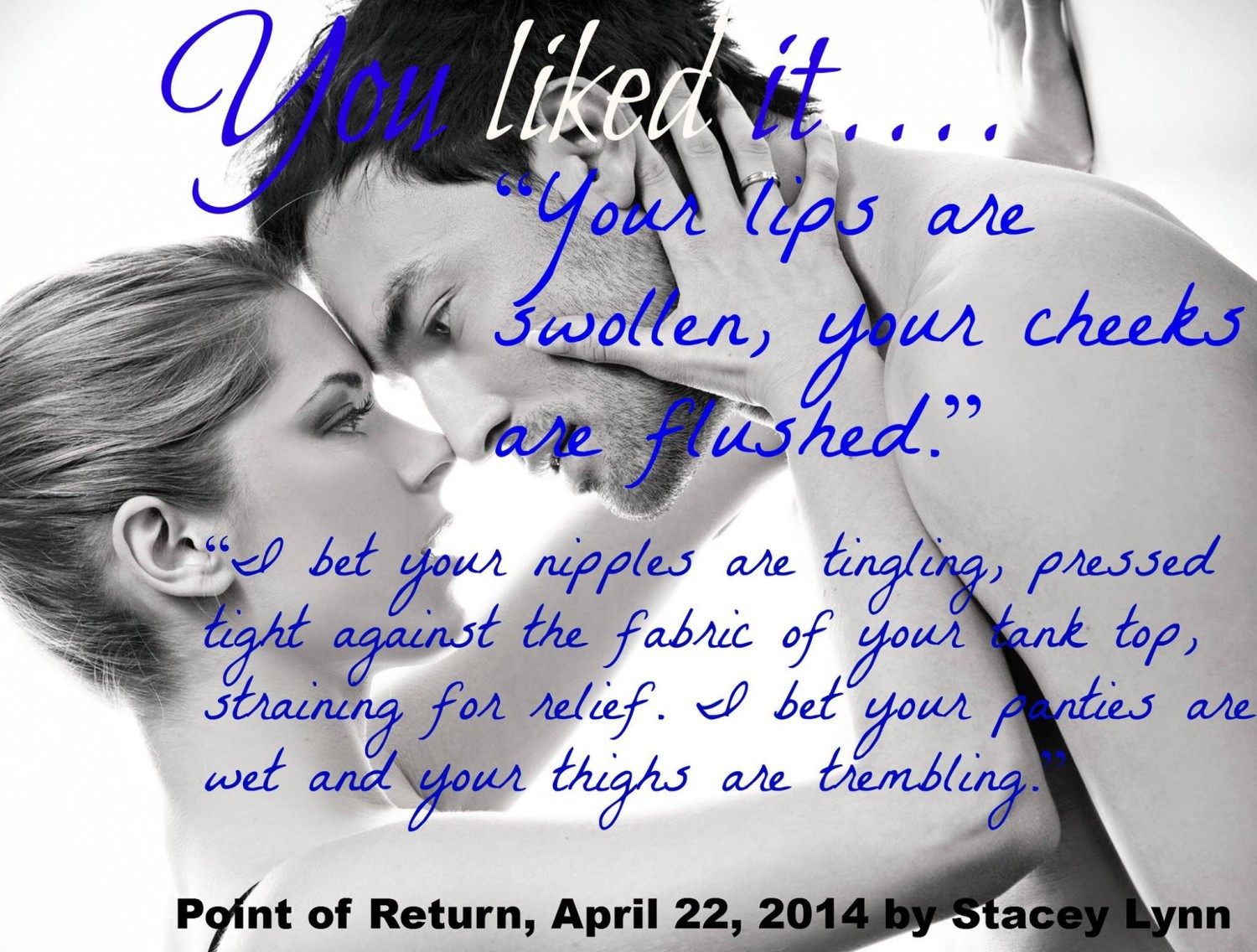