This is an anthology which brought eight authors together to help one little girl and her battle with cancer, Sophie Isabella Ryan. All proceeds from this anthology will go to Prayers For Sophie.

Rapture. Allow yourself to be carried away by eight sexy, swoon worthy men who will forever leave an imprint on your heart. This anthology contains eight previously published works by Amazon, USA, New York Times bestselling authors and more. Eight women, eight stories, all for the fight of one little girl. 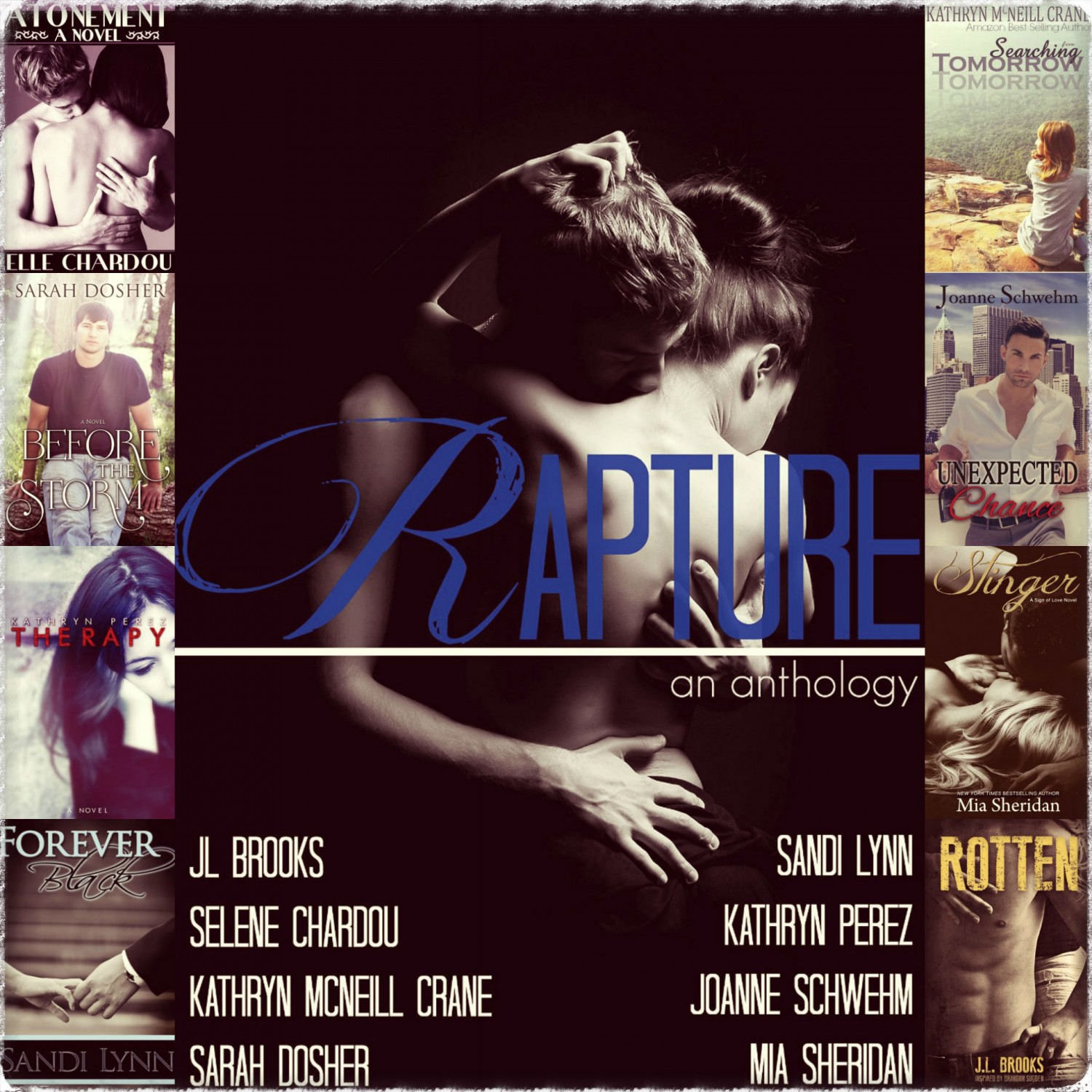 100% of the proceeds from this anthology go toward helping Sophie Isabella Ryan who was diagnosed with a rare Optic Pathway Glioma brain tumor on June 23rd, 2013 at the age of 8 1/2 months old. I urge you to take a look at her page and meet this tiny warrior and her family. They are battling the unthinkable, but doing it with so much grace.

For just 99 cents, you can not only get 8 previously released titles, but you can be part of helping this courageous family. 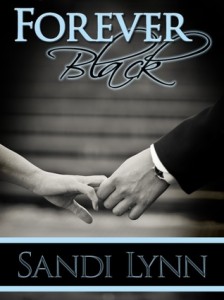 When Ellery moved to New York with her boyfriend, she thought they’d live happily ever after in their small New York apartment. She never thought he’d pack his bags and leave because he “needed space.” With her newfound single status and fear of being alone, Ellery buries herself in her artwork and paintings until one night she helps a mysterious intoxicated stranger get home safely. Little did she know the mysterious stranger is none other than CEO and millionaire Connor Black. After finding Ellery in his kitchen the next morning and assuming she broke his #1 rule about sleepovers, he becomes intrigued, not only by her stubbornness and defiance, but by her kindness.Connor Black, emotionally dead and damaged, that stemmed from a personal tragedy, made a vow to never love or fall in love with a woman, until Ellery Lane walked into his life by accident. After she opens up and shows him her world, Connor starts to feel emotions and feelings he never knew existed. Despite the rumors and warnings regarding Connor Black and his use and misuse of women, Ellery finds herself being drawn into his world. Ellery knows they can never be together because she is harboring a deep secret that could destroy Connor emotionally forever. Join Connor and Ellery as they embark on a journey of courage, love and strength. Will it be enough to save them? 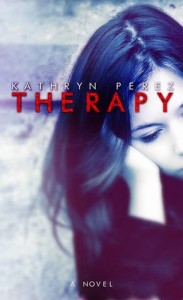 I’m needy.I’m broken.Cutting breaks through my numbness, but only opens more wounds.Depression, self-harm, bullying….that’s my reality.Sex and guys….that’s my escape.The space between the truth and lies is blurred leaving me torn, lost and confused. And while the monsters that live in my head try to beat me– the two men that I love try to save me.This is my story of friendship, heartache, and the grueling journey that is mental-illness.Sometimes you have to get lost in order to be found… 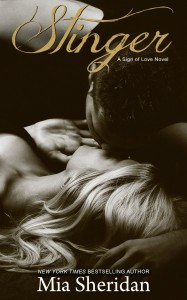 Grace Hamilton was the girl with a plan. She knew exactly where her life was going and prided herself on always achieving her goals. It was who she was, and how she lived her life. She never stepped outside the lines, and never considered what she might desire and whom she was actually trying so hard to please. Until him…Carson Stinger was a man who didn’t play by any rules except his own. Working in the adult entertainment industry, he didn’t care what others thought, and took each day as it came, no direction, no plan. He knew what women wanted from him and believed it was all he had to offer. Until her… When circumstances forced them to spend several hours together, they walked away changed. But for two people who never should have meshed, overcoming the reality of their vastly different lives wasn’t possible. At least not yet… 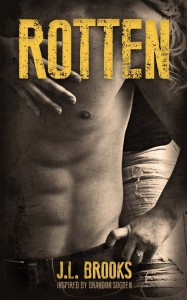 Growing up on the outskirts of Las Vegas as the daughter of notorious strip club owner, Stephen Knox, and a mother who abandoned her at birth, life was less than kind to a young Antoinette.After a failed teenage suicide attempt, Toni hit the road in search of a life free of undeserved cruelty and any resemblance to her past. Years later, Toni is lost in a dead end marriage and makes a painful confession that sends her back to the one place she always wanted to escape. But can she really right the wrongs that haunt her? Toni soon finds that the only place where things stay the same is in your mind.When her path crosses with David Stark, childhood playmate turned one night stand, she cannot deny the spike in temperature she feels every time he’s near or the scorching dreams that flood her at night.Digging through the years of heartache, Toni soon finds herself torn between the man she is committed to and the one who has always held her heart. As each layer unfolds before her, she discovers the root cause of her pain. Always believing the source was external, nothing could prepare her for the truth. 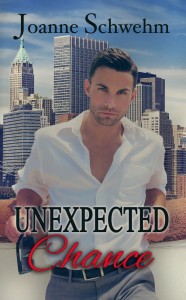 Always wanting to be a writer, but not having much experience with men or romance, Aubrey sets out to find her inspiration with the help of her best friend. Just when she thinks all hope is lost, she meets Alex Logan. He’s beyond handsome, well dressed, and is known to be a player—perfect for the role.The unexpected happens and Alex becomes more than just an inspiration to Aubrey, but a misunderstanding leaves her heartbroken. Before an opportunity arises to straighten things out, tragedy strikes, and Aubrey’s world is turned upside down.While Aubrey is trying to cope with her new life, a new chance at love arises. Can she find it in her to trust again? Will Alex be able to win her back? Or will she take this new unexpected chance at love? 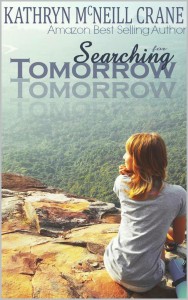 Some people are blessed to find that one certain person who completes them.Wrynn’s yesterdays were what others only dream of having. She and Tripp were the best of friends before they even thought about love. They had the fairy tale life where ‘like’ turns into ‘love’, and ‘love’ becomes ‘happily ever after’.What happens when life conspires against you, and snatches your soul mate from your arms?…only her forever love ended much too soon.Broken beyond her own ability to repair, Wrynn boxes up her grief and attempts to raise her three girls the best she can on her own. As time slowly passes, Wrynn relives her life with Tripp while struggling most days to get out of bed. She is reminded of him at every turn.How do you set your grief and anguish aside? How do you pick up the shattered pieces, put those pieces back together again, and try to move on?Wrynn tries to find the joy in life every single day through her daughters, family, and friends. Her twin brother Liam has dedicated himself to helping Wrynn put her life back together after losing his own love. On the other hand, her mother-in-law lives to torment her at every turn. Wrynn can’t even find a chance to breathe, much less a desire to somehow search for her tomorrow. 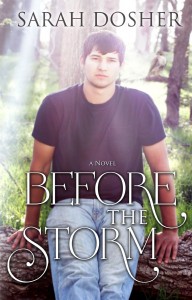 This is not a simple story of first loves, this is an emotional yet touching look at life and how the smallest decisions can shape futures.What you think you know can change before your eyes. Fathers abuse, mothers deceive, best friends betray, sisters dismiss, love controls, and anger consumes.After graduating from high school, Easton Grace knows exactly what he wants and how to get it. His goal for the summer includes two things: avoiding his father’s wrath and protecting his sister. His carefully laid plans are quickly changed when a girl comes to town causing him to lose his tight grasp of control on everything, including himself. Following years of sorrow, Taylor Monaco returns to a town she never wanted to see again but will forever call home. Her life was eternally changed by the people in this town, especially one boy. Her heart desires someone she’s not sure her soul can handle.Can Easton and Taylor find their path before it’s too late – before the storm? 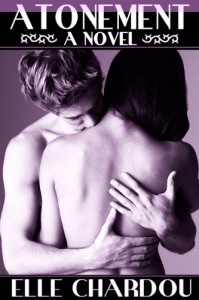 Deirdre Bardot is a PhD student at Harvard and on her way home for Thanksgiving when she finds out her father has been murdered in a vicious hit and run by a drunk driver.Forced to piece her life together after such a traumatic event, Deirdre moves back to Seattle to be closer to her younger sister, Caitlyn, and their mother.When her psychiatrist, Dr. van der Meer, suggests she needs to get away from it all and take a vacation, her best friend decides to introduce her to a friend of his who has more or less the same idea. Colin is perfect: he’s good looking, self-deprecating and sexy as hell but he also happens to be the Dr. van der Meer’s son.Deirdre finds herself falling hard for a guy she barely knows and one who is equally into her as she is into him. They decide a trip to Western Europe together is the perfect way to get to know one another a whole lot better.Then an unspeakable and random act of violence occurs one night and Colin realizes he is forced to reveal a secret to Deirdre he has been hiding…a secret that is breaking him, and in doing so to free his conscience, he just might destroy the relationship he has created with Deirdre and lose her forever.