Grey and Stefan knew from the moment they met that they were destined for one another. Despite the none-too-quiet protests from his family they married straight out of high school. Their love was strong and only grew when a year later they welcomed their baby girl into the world.

Life was perfect…until one night changed everything.

Grey had never been so alone. Stefan had died inside the day their child did. Doing the only thing she could to save herself, she ended their marriage.

Stefan Harrison is the most eligible bachelor with a wallet and company that continues to grow. Every night he has a different woman on his arm with the next not far behind. Grey Desmond is the lead stylist and co-owner of a reputable salon with the perfect fiancé and a beautiful wedding in her future.

But one chance meeting between Grey and Stefan is all that is needed to reawaken the feelings from the past.

She tries to avoid him but he won’t let her. Losing Grey was Stefan’s biggest mistake and he won’t stop until he wins her back. But Grey doesn’t know if she could ever trust him again. Leaving her heart to decide between the perfect future…or the past she never let go. 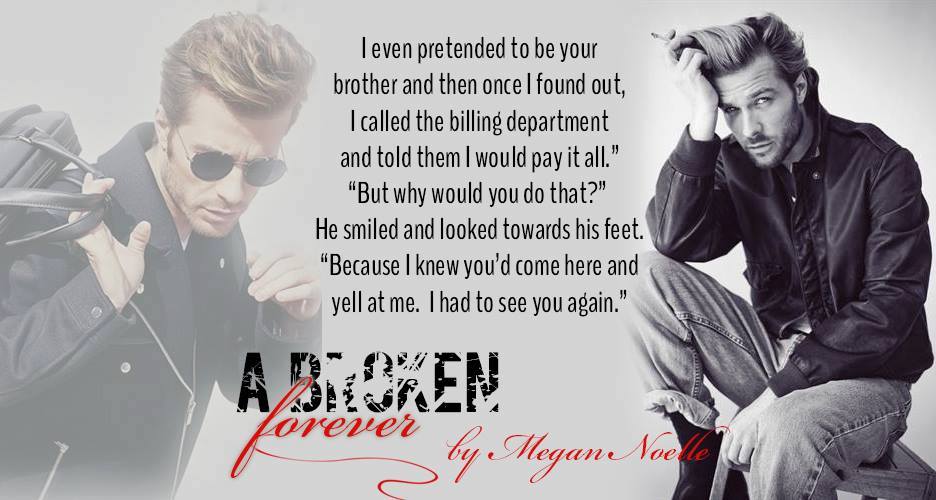 Deciding that my overactive hormones were under control, I turned back toward the rest of the room but gasped as soon as I did. Stefan stood directly behind me, eyes looked up from hooded lids. The slight tension from before was almost out of control as he closed the distance between us. With each foot in my direction, I responded with a step backwards, until finally the wall stopped me. His tongue slid out over his lips making them glisten in an exceptionally tantalizing way.

Not that I noticed of course, but someone might.

“Is something wrong, Greyson Rose?” My name rolled off his tongue as he annunciated every syllable.

He took one more step closer. “You suddenly got very…” His face leaned down toward my chest, as he listened to the rapid beat against my ribs. “Jumpy.”

The scent that covered every square inch of him took my senses hostage. Shivers raced up and down my spine and I tried to clear the intoxicating haze from my awareness.

A mischievous grin touched his eyes and as much as I wanted to hate him for getting some sick pleasure out of what he was doing—I couldn’t. The urge to shove him back and pull him closer raged a war deep in my psyche. Stefan slowly lifted his arms and pinned the wall on either side of my shoulders. His feet stayed firmly planted but he lowered his upper body within an inch of mine.

“So, last night you got me to promise I would shut down my work, at a time much earlier than I anticipated leaving. Do you remember?”

Stefan nodded, keeping his intense gaze trained on me. “Now I have something I want you to do for me.”

My heart leapt into my throat and a sudden rush of heat swirled low in my belly. The heaves of my chest brushed faintly against his and each touch made my breath catch.

“Wh…what’s that?” The shake of my voice became unbearable as I struggled to remain vigilant.

“I just want you to answer one simple question for me.” His right hand left the wall, he held up one finger an inch from my nose.

“You need to answer me with complete and absolute honesty. I’ll know when you’re lying to me, Greyson Rose. Will you promise to answer truthfully?”

At this point I couldn’t filter my answers even if it was the difference between life and death. My tongue licked out onto my incredibly dry lips. For the first time Stefan’s eyes left mine as they focused onto my mouth. I forced down a rising groan. 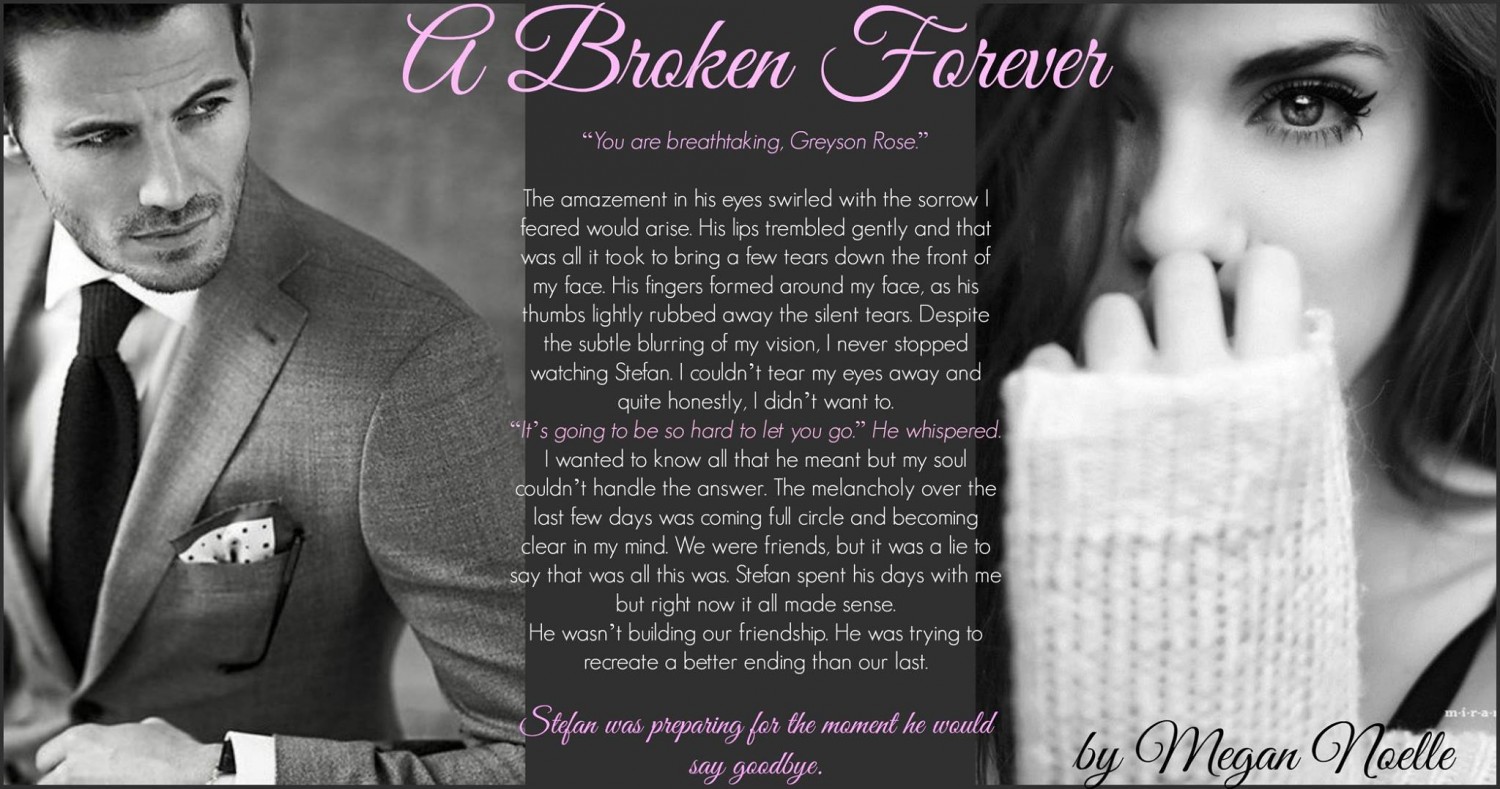 I am Megan Noelle! I have been writing for many years and currently have two books out that are part of a series. My For You series were the first novels I published but I had to stop everything to write Stefan and Grey’s story in, A Broken Forever. I have been writing since I was old enough to hold a pen and finally pursued my dream of becoming a novelist.  Writing is my passion and I am all for following one’s passions! One of my other passions is being a mom of my adorable daughter Peyton. When I’m not writing I’m a stay at home mom and a full time student. I’m getting close to finishing my 2-year degree and I am more than ready for a break.  There are many things I want to do in life, but if I can write, be with my daughter and my family—I will be happy!

5 *NEW* Random Things You Don’t Know About Me!

1. I have recently retired my love for Diet Coke and focused solely on Diet Pepsi. And yes, I know all about aspartame, and all that bad stuff. But, it’s delicious.

2. I would someday love to write a book that Tim Burton wants to make into a movie!

3. I have an unfailing love for many movies I watched growing up (not just Disney) and it is very difficult for me to like anything new. Some of my favorites set the bar too high apparently! (When Harry Met Sally, My Best Friend’s Wedding, Father of the Bride Part I & II, & many more!)

4. I have a horrible wonderful addiction to book covers!

5. I have more story ideas in my head than I will ever be able to write. 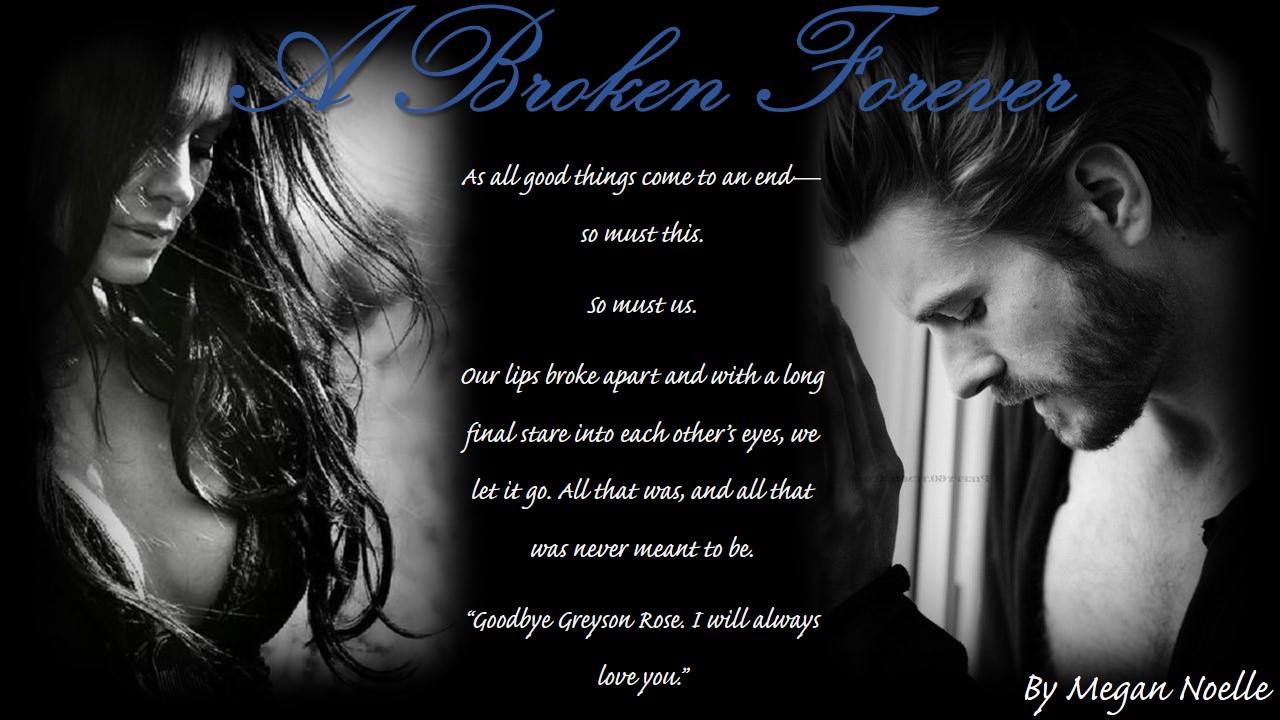