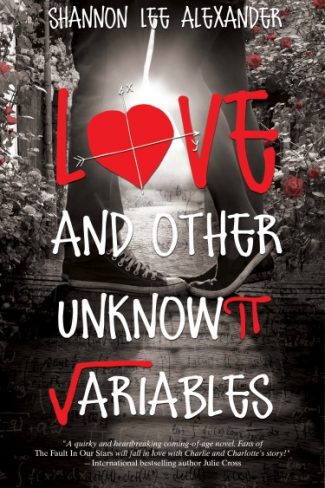 Charlie Hanson has a clear vision of his future. A senior at Brighton School of Mathematics and Science, he knows he’ll graduate, go to MIT, and inevitably discover solutions to the universe’s greatest unanswered questions. He’s that smart. But Charlie’s future blurs the moment he reaches out to touch the tattoo on a beautiful girl’s neck.

The future has never seemed very kind to Charlotte Finch, so she’s counting on the present. She’s not impressed by the strange boy at the donut shop—until she learns he’s a student at Brighton where her sister has just taken a job as the English teacher. With her encouragement, Charlie orchestrates the most effective prank campaign in Brighton history. But, in doing so, he puts his own future in jeopardy.

By the time he learns she's ill—and that the pranks were a way to distract Ms. Finch from Charlotte’s illness—Charlotte’s gravitational pull is too great to overcome. Soon he must choose between the familiar formulas he’s always relied on or the girl he’s falling for (at far more than 32 feet per second squared). 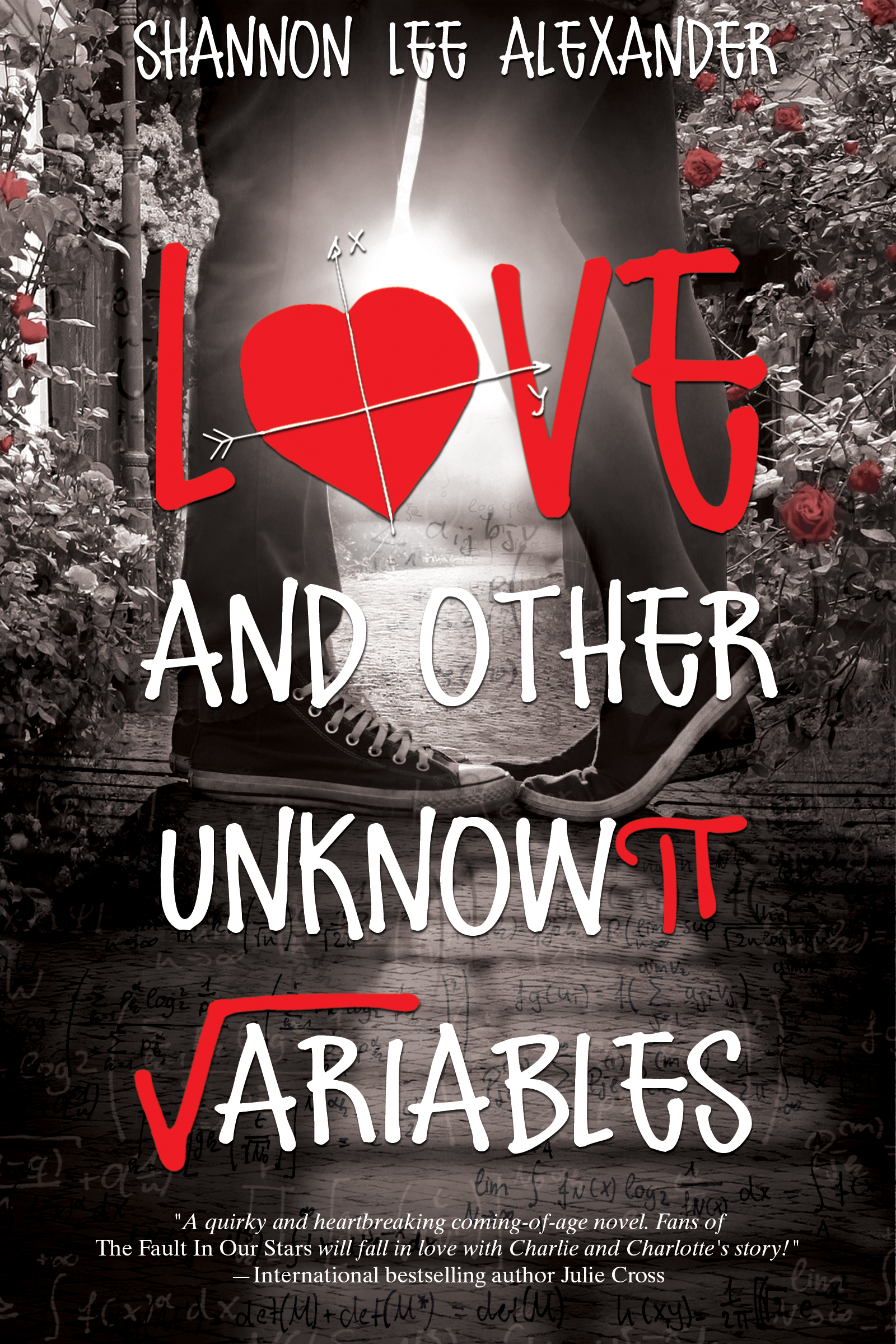 Meet Charlie Hanson and Charlotte Finch, the main characters of Love and Other Unknown Variables. To help you get to know them better, we’re going to play an ice breaker game called Two Truths and a Wish. It’s a variation of Two Truths and a Lie, but instead of a lie, you share a secret dream you wish were true. Charlie will share and Charlotte will guess which is Charlie’s secret dream.
Start us off then, Charlie!
Charlie: Uh…
Charlotte: (leaning back in her seat on the couch) Just try to stump me, Hanson. I know you like the back of my hand, which I happen to know really well since I spent hours sketching it yesterday.
Charlie: Give me a minute.
Charlotte: Some of us don’t have all day to play games. Some of us have stuff to do.
Charlie: Some of us are going to get a pillow to the face in nine tenths of a second.
(Charlotte laughs and lightly punches his shoulder)
Um, okay.
I like to garden. I’ve met my mathematical hero Dr. Martin K. Bell. I’m an excellent kisser.
Charlotte: (eyes wide and mouth agape) Oh.
Charlie: Go ahead. Figure it out, Einstein. (Charlie fluffs the throw pillow at his side before lounging back on his side of the couch.)
Charlotte: (pushing a short, black curl behind her ear) I’ve seen you working in the garden. You don’t look like you enjoy it, not with that old lady cursing at you.
(A smug smile spreads across Charlie’s face.)
And if you’d actually met this Bell person, I’m sure it’d be one of the first things you’d tell people.
(Charlotte adjusts her voice to make it gruff, pinching her face as she does so.)
“Hi, I’m Charlie. I’m going to MIT. Dr. Bell and I are like this.” (crosses fingers, shoving them in
Charlie’s face)
Charlie: That’s the worst impression in the history of ever. (His face, however, is pinched much in the same manner as Charlotte’s exaggerated one.)
What about the kissing?
Charlotte: (blushing) I…uh…
Charlie: So am I a good kisser or is that my wish?
Charlotte: (crossing her arms over her chest) How am I supposed to know?
Charlie: (leaning closer to Charlotte, almost whispering) I’d give you an example to judge by, but I think that’d be cheating.
Charlotte: (turning her face toward his so their faces are inches apart) Careful, Charlie. I don’t always play by the rules.
Charlie: (quickly retreating from Charlotte and blurting everything in a rush) I met Dr. Bell in a bathroom once. I was so nervous when I saw him walk in that I nearly peed on my shoes. And gardening isn’t my favorite thing, but I like seeing the progress of the garden as I work on it.
Charlotte: (smirking) Ha! So you just wish you were a good kisser. I knew it.
Charlie: No you didn’t. (Charlie’s ears are bright red and he shifts uncomfortably next to Charlotte.)
Charlotte: (Reaching out to place a hand on Charlie’s forearm) If it helps, I hoped I was wrong. 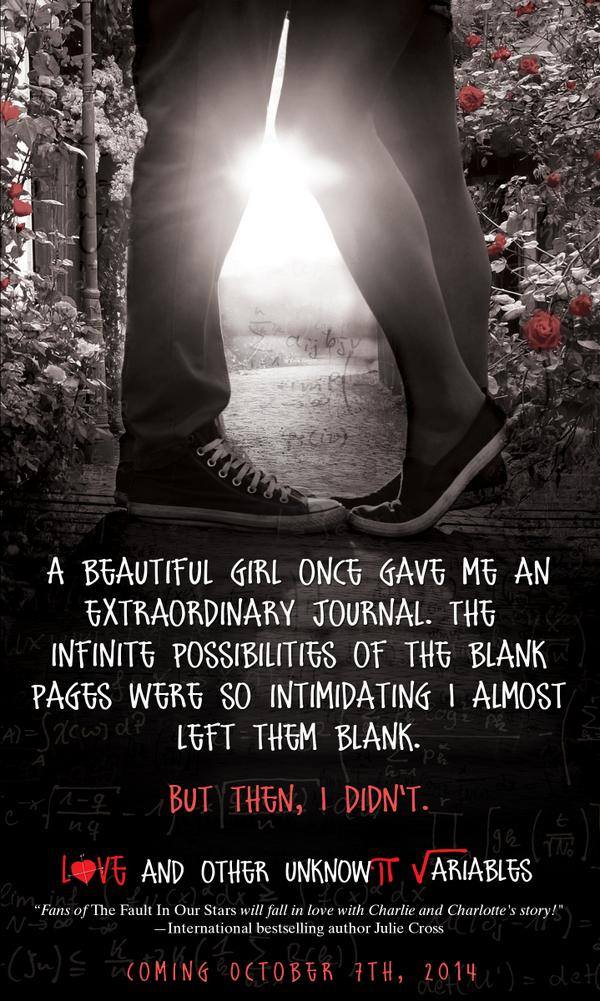 Writing a bio makes me cringe more than writing a synopsis, and believe me, I’m one big whiny baby about synopses.

I’m a wife, mother of two, and furry dog owner. I’m also a former middle school language arts teacher, book addict, and late bloomer. I only just figured out what I want to be when I grow up.

In 2009, I lost a dear friend to ovarian cancer. Watching her brave her treatments and stay hopeful in the face of this stupid disease was life altering for me. Losing her was devastating. I write because she gave me the courage and hope to do so.

I’m represented by the wonderful Jessica Sinsheimer of the Sarah Jane Freymann Literary Agency. Currently, I’m working with Heather Howland at Entangled Publishing on my debut young adult novel to be released fall 2014, LOVE AND OTHER UNKNOWN VARIABLES.