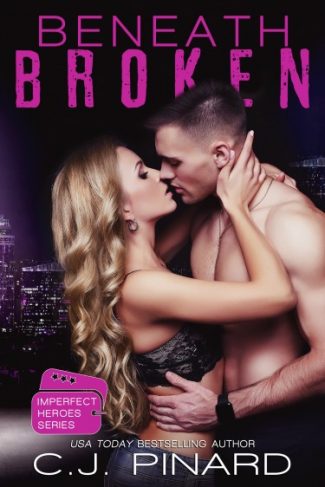 He’s a clean-cut cop who loves a good challenge.
She’s a smart executive with no interest in falling in love.
It won’t take long for the flames of desire to scorch them both, forcing them to either douse the blaze, or succumb to the fire.

Mason
I don’t give up easily. My personality and training taught me that failure is not an option, and getting the attention of the beautiful executive president Harper Mathis is going to be my biggest challenge yet. But first I’ve got to find out why she’s so withdrawn. A woman that stunning must have secrets and I’m going to find out what’s hiding behind those baby blue eyes of hers. She’ll quickly see how much I love a good game of chase.

Harper
I’ve gone through hell and am not ashamed to admit that I’m broken. Damaged goods. Used up and empty. I want nothing to do with men or love, especially not a cop and a veteran – one who puts his life in danger every day. I’ve been there, done that, and my heart has no interest in someone like Detective Mason Oliver. Even if he's the hottest thing I’ve laid eyes on in a very long time. I get the feeling Mason always gets what he wants, though. Well, he hasn’t seen my stubborn side. 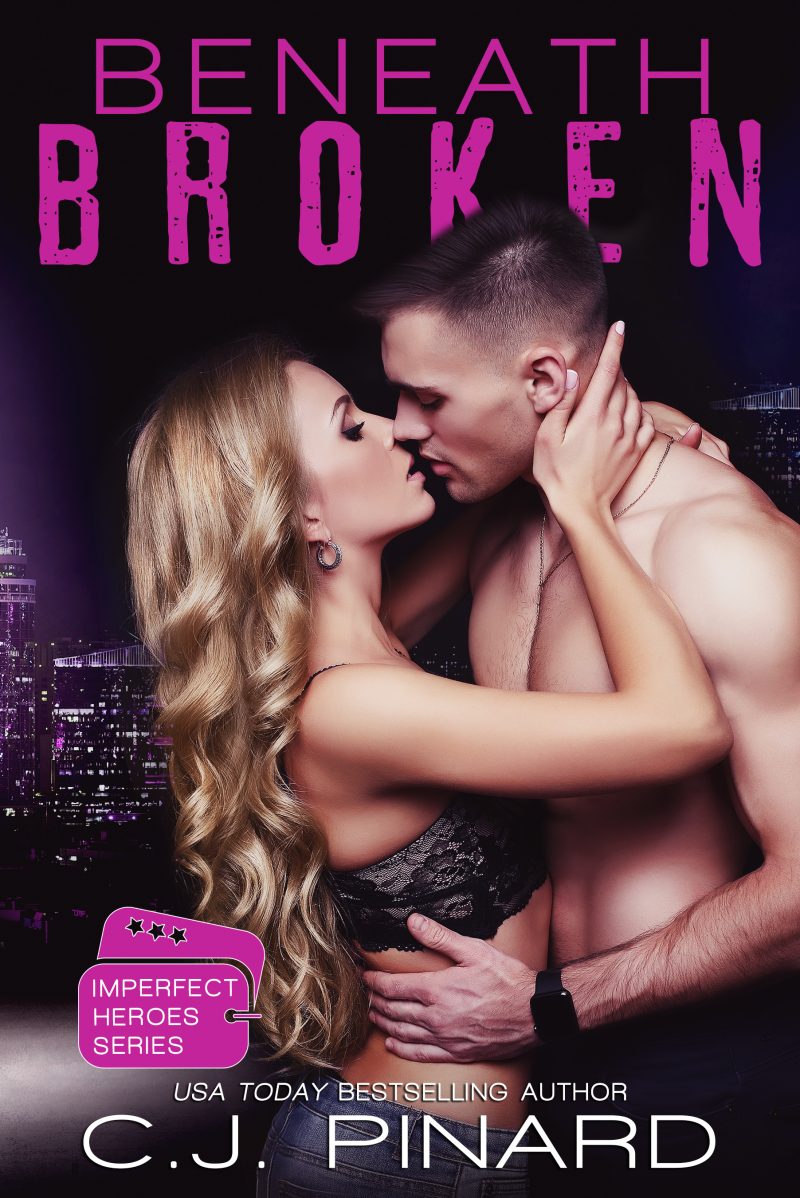 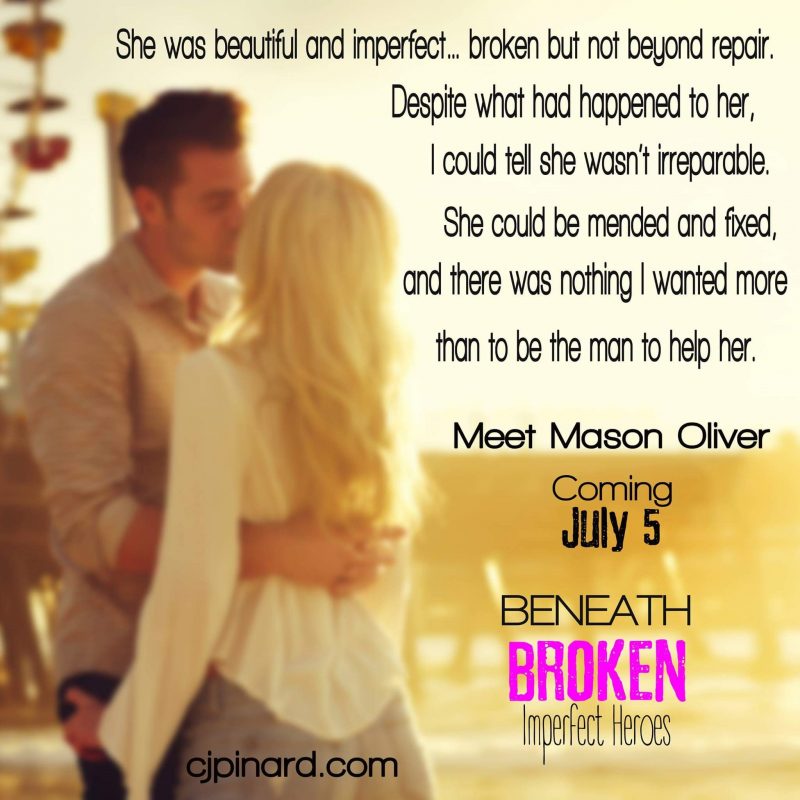 I had to tell myself to breathe. To inhale and exhale. To pull in air in order to keep living. The minute Detective Oliver left my office, I scrubbed my hands over my face and smoothed the few stray hairs back into my sleek ponytail. I shook my head and laughed. Someone that hot should not be a cop. He looked like he should have been an underwear model or some kind of movie star.

I swallowed hard and smiled a little to myself. This was a ridiculous notion, being so attracted to someone who was obviously not attracted to me, but just doing his job by interviewing me. Yet, he looked familiar to me somehow. I could swear I had seen his dark hair and alluring hazel eyes somewhere before. He had a small smear of dark, sexy stubble on his chin, and the olive colored dress shirt he wore not only matched his name, but made his eyes gravitate toward the green side of hazel instead of brown. His colleague, Detective Jenkins, had been checking me out – I wasn’t stupid and these things rarely went unnoticed by me, but Jenkins wasn’t someone I would have ever taken interest in. He seemed a little overconfident and flirtatious, and the gleaming silver wedding band on his left hand was not overlooked by me.

But Detective Oliver – he radiated a heat and confidence that woke me up a little. This dead and desperate depression I’d been wallowing in for over a year had taken its toll on me. Between the under-eye bags and weight loss, I had little confidence that someone of his hotness and caliber would be remotely interested in me.

I bit back a smile as I thought about how proud my best friend would be of me for even having these thoughts. Today was Friday, and work emergency or not, I knew she’d be dragging me out to God knew where, as I had promised her I wouldn’t be spending another Friday night with a tub of Mint Chocolate Chip and reality TV.

I had to shake off the look of Mr. Oliver’s eyes and the way his dress shirt clung to his muscled arms and get back to work. Aside from the mountain of paperwork and endless emails, I now had to deal with police reports and insurance claims, and that was something that I needed a clear head and a no-nonsense attitude for. There was no time for lusty thoughts or lip-biting over a super-hot detective who probably had forgotten about me the minute he had stepped out through my shattered front door. 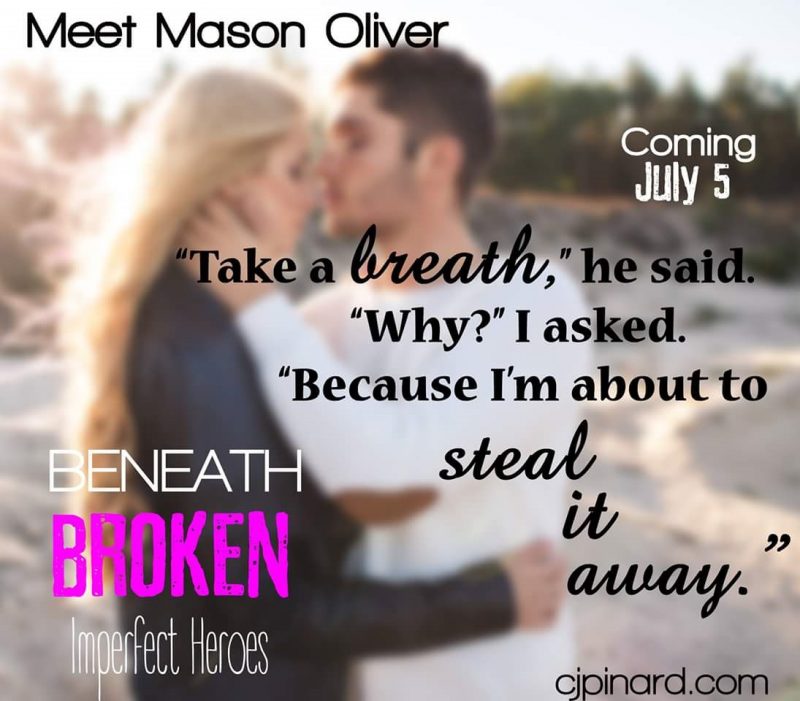 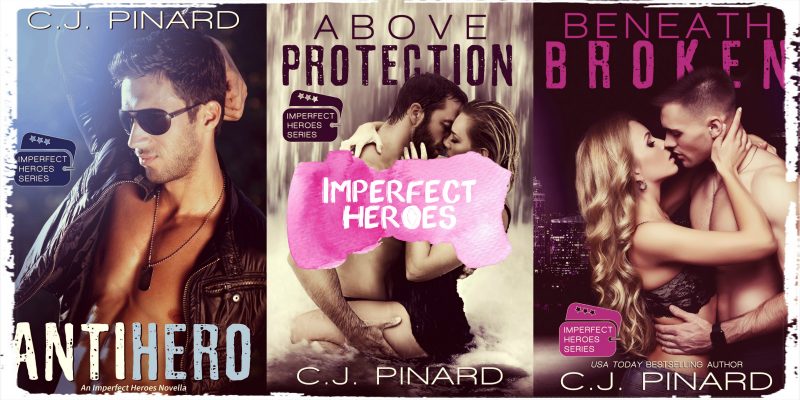 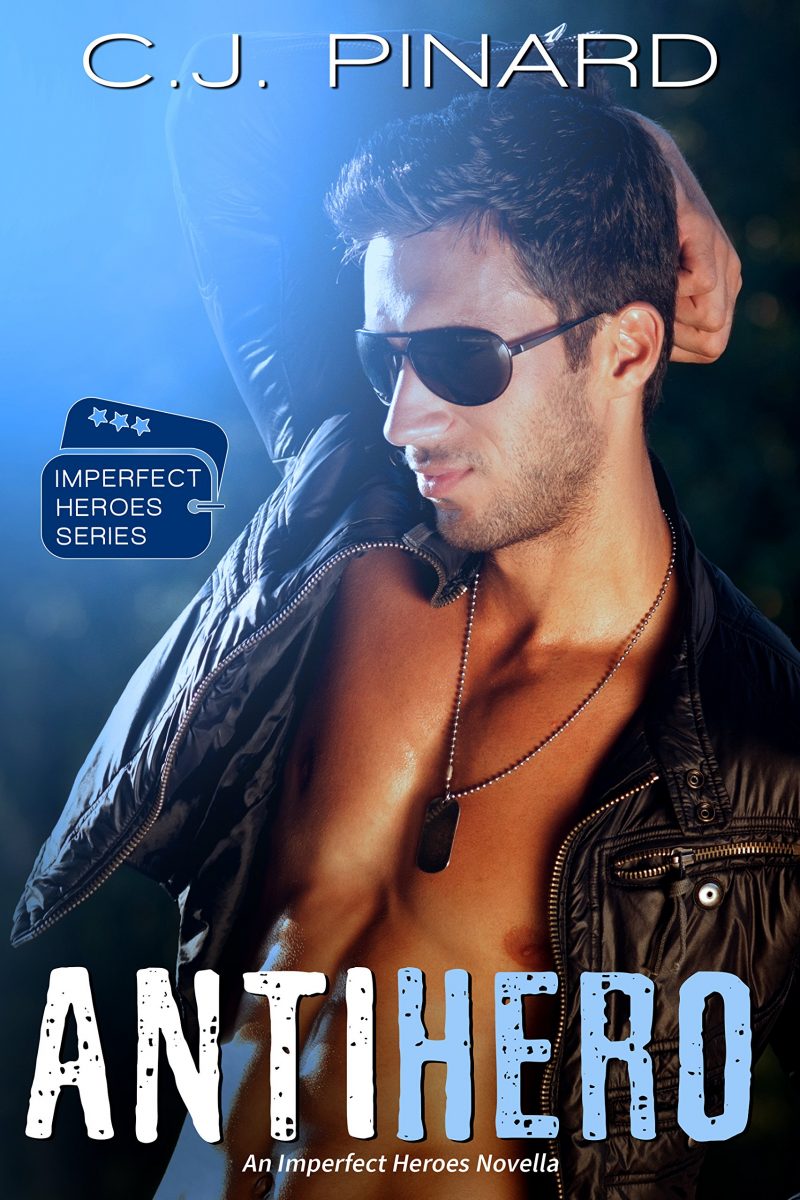 He’s dealing with a haunted past of crime and war.
She’s trying to stay clean and walk a straight path.
Is the chemistry storming between them enough to keep them together?

Ellis
I did my time, both on the streets and in the Marines Corps. Now that I’m out, I’m feeling sort of lost. I need to find a job and get past this disability the ugliness of war has left me with. The only thing that makes me feel grounded and stable is Talia Logan. She’s a red-haired breath of fresh air when I feel like I’m drowning in nightmares and responsibilities. So why can’t I just commit to her – make her mine? Because I’m jacked up and no good for anyone. Especially her.

Talia
The only part of my past I’m proud of is how I beat the addiction that almost killed me. I’m on the right path to a clean life, a college degree, and new friends. Ellis Anderson keeps coming over to worship my body and whisper sweet things in my ear that keep me hanging onto him. But he’s bad for me. A guy with too many demons that I don’t have the time or energy to deal with. So why can’t I just tell him to get out of my life? Because I’ve traded one addiction for another, that’s why. 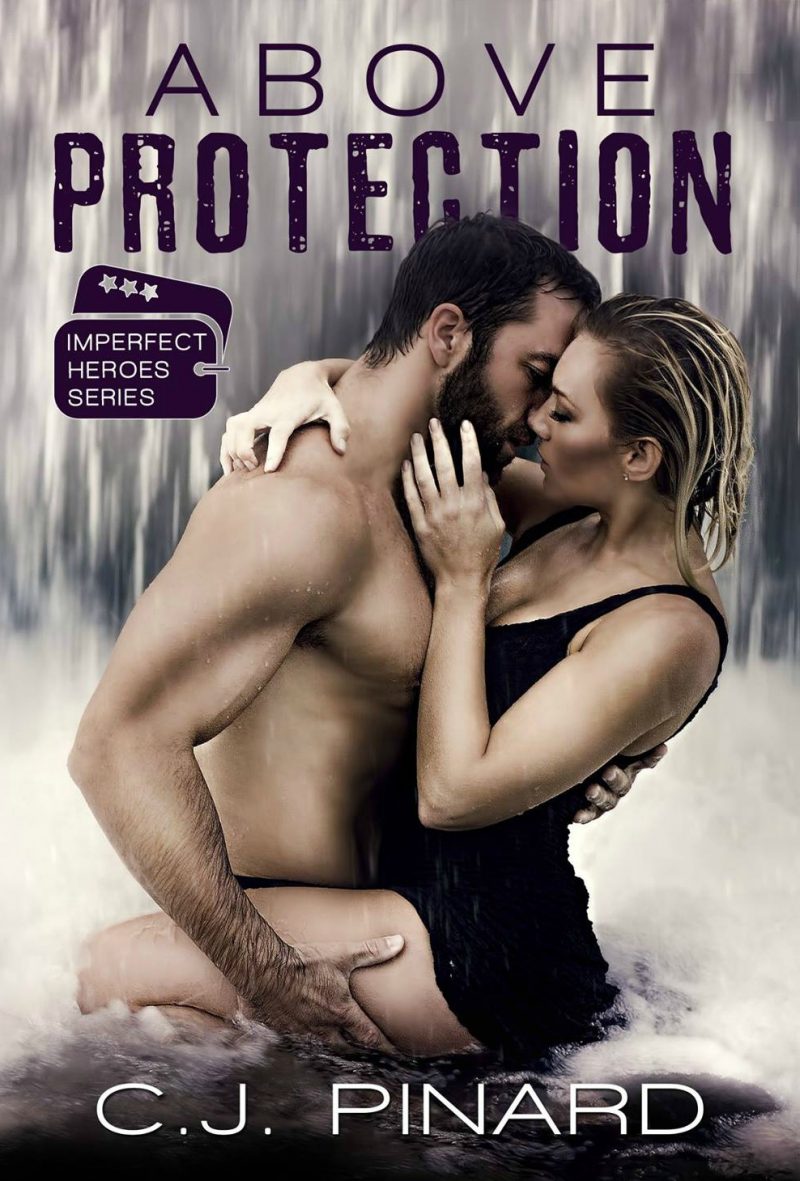 He’s bearded, angry, highly trained, and has a job to do.
She’s the damsel in distress who’s smarter than she looks, and doesn’t want anyone’s help.
Could it be they both need something neither will admit to? Fate fueled by the laws of attraction may just decide for them.

Duke
I didn’t ask for this. I was just doing my job, and they have the nerve to put me on a Witness Protection detail? This is crap. I’ll do my assignment, then go back to my job and what I love – kicking ass and taking names. I hadn’t spent 6 years in the Marine Corps to be put on babysitting duty once I’d joined the FBI. The witness they assigned me to, Rayanne, is an annoying, brainless blonde with a sassy mouth and a body that belongs on a website you had to pay to access. Not that I noticed or anything.

Rayanne
I can look after myself. I don’t need anyone’s help, and the government is being ridiculous for putting me in Protective Custody. I’ll testify against my former bosses and then go back to my life as a single girl in the big city. I love my career as a paralegal, and once this Neanderthal they’d assigned to babysit me is out of my life, I’ll go back to it. I just wish he wasn’t so easy on the eyes. The beard, the hard body, and that voice. Why couldn’t they have sent me someone ugly – and nice? Because Duke is neither of those things.

I’m a California girl living in land-locked Colorado. Lover of red wine, wearer of fabulous shoes, and a die-hard Niner fan, I’m also an editor at heart. I’ve written over a dozen books and short stories that contain both contemporary/new adult and paranormal romance that are a little bit badass, a little heart-wrenching, and sorta funny (to me, anyway). Almost all my books usually contain law enforcement or military undertones, since strong, brave, alpha men and women are my weaknesses. When I’m not writing, I can be found working at a very strange day job, which may or may not have some mild influences on my gripping stories – so strange, in fact, I think I’ll write a book about it one day.

I’m also a proud member of the Romance Writers of America (RWA).