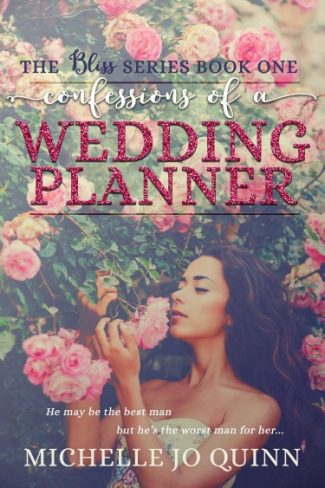 He may be the best man, but he’s the worst man for her...

Unable to refuse his request, She finds herself creating the most magical event for the perfect couple, with the help of Bliss Events' motley crew.

Except nothing is ever perfect...

And not all happy ever afters can be planned...

Thanks to his best friend’s wedding, he finally has a shot at the woman he’s always wanted–Veronica. From San Francisco to Paris, and back, he pulls out all the stops, so she knows where she really belongs–with him.

Only Veronica wants nothing to do with the rich, sexy, irresistible playboy.

Can Levi convince Veronica that her perfect happily ever after is closer than she ever realized?

Title: Confessions of a Wedding Planner 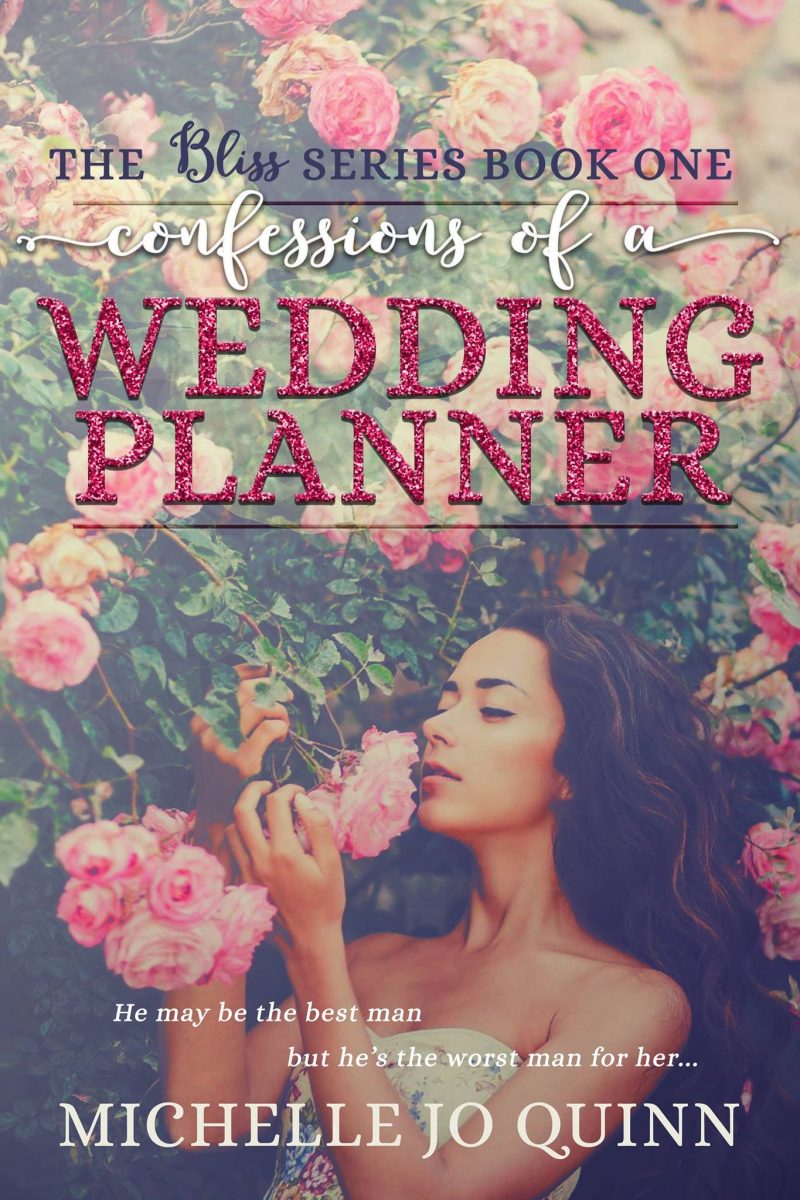 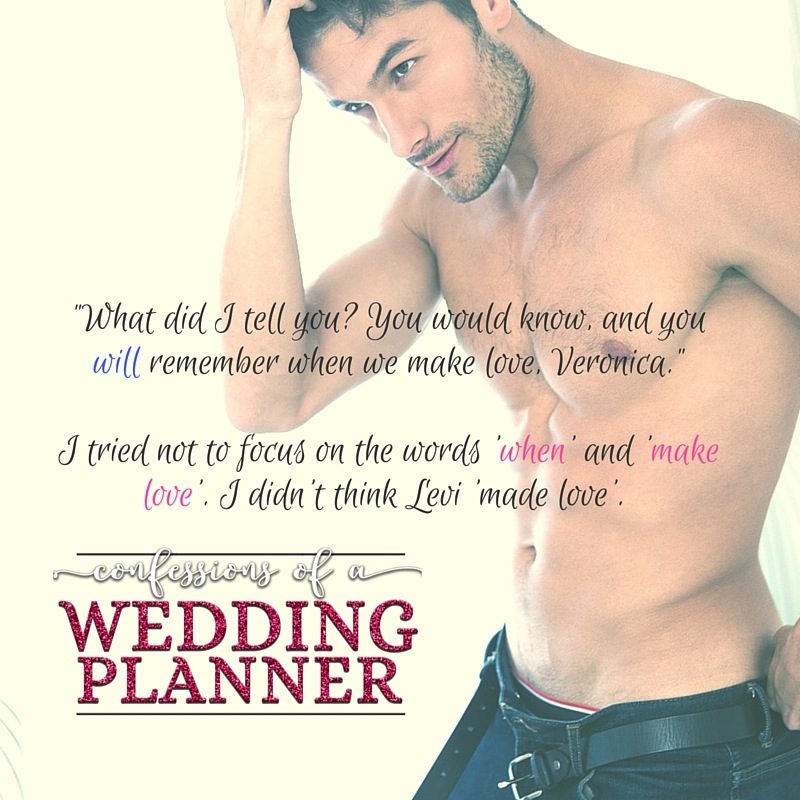 I stifled a gasp as a six-foot-four hunk of a man in a plain white tee and dark jeans that hugged every sinful bit of his lower halfsauntered in. Diego prowled like a male model on a catwalk. He was just plain sexy all over.

“Sorry I’m late,” he said, eyes on me, as he neared. He kissed one side of my cheek.

“What are you doing here?” I whispered, then smiled.

“I knew you were gonna see Eddie, so I thought I’d surprise you and stop by. I would have made it on time, but I got stuck in traffic.” Diego glanced over my head and nodded. “Hey, Eddie.”

“Hello?” Eddie was right to question Diego’s presence.  On top of that, he didn’t even know him, but Diego acted as though he did.

I tapped a finger on my chin, trying to make sense of what was happening.  When I received the text from Chase: Is he there now? I got it. Diego was Chase’s solution to my dilemma.

“Hi!” Levi’s date spoke up in a high-pitched tone. Diego and I turned to her, and I swallowed a guffaw. She stretched out the hand that had been in Levi’s shirt moments before and offered it to Diego. “I’m Ophelia.”

Her name rolled over her tongue, and it sounded as though she said ‘I’ll feel yah.’ I bet she would too. I shuddered.

Diego, ever the good boy, took the proffered hand and shook it once. “Very nice to meet you.” He had to pull away forcefully from Ophelia’s grasp. Then he angled his body and stretched his own hand toward Levi. “Diego,” he introduced himself.

Levi’s eyes narrowed into tiny slits. He looked down at Diego’s large, callused hand, up to Diego’s face, and then to me.

I had to take advantage of the situation. The new me needed it. Levi brought Ophelia to either piss me off, or make me jealous, or whatever. I touched one of Diego’s bulging biceps and left my hand on it. “Diego dear, this is Levi. Remember the wedding I told you about last night?  He’s the best man.”  I made sure to enunciate the ‘last night’ and didn’t miss the understanding in Levi’s eyes.  Yes, he knew that Diego was my date.  He didn’t have to know that we had parted as friends.

Eddie cleared his throat, produced dessert spoons and forks, and placed them on a linen serviette on the table. “Shall we continue?” We all returned our focus on Eddie.

“Our first cake is an homage to our lovely country: apple and cinnamon cake with brown sugar frosting.” Eddie sliced the first cake and placed a piece of it on a plate.

“Diego and I will just share one, Eddie.” The words just came out. Out of the corner of my eye, I could see Levi’s mouth gape.

“That’ll be the same for us,” Levi said. His voice did not waver.

I looked at Levi and Ophelia, who was still eyeing Diego and seductively licking a spoon.

Eddie stared at the two couples in front of him. He was as confused as ever. “Very well then.” He proceeded to cut the next cake, a mocha-colored frosting over yellow cake. “Next, we have almond with mocha icing, chocolate drizzle, and pistachio crumbs.”

The third cake was decorated more elaborately with Corneille lace piping, something I had become proficient in when I had worked for Eddie. “This is our blackberry and currant chiffon with raspberry filling and limoncello icing. My dear Nica’s favorite.” Eddie glanced at me, and I sent him a pleased smile. “And last, but not least, dark chocolate with a whipped peanut butter mousse filling, and dark chocolate ganache. Rich, robust, and I believe it’s still the groom’s favorite.”

“You’re so good, Eddie. I can’t believe you remembered,” I quipped, even though I had reminded him about it yesterday when I confirmed this appointment.

He passed along the plates, and I placed them on the table. Four cakes for Diego and me, and four similar slices for Levi and Ophelia. I hoped he choked. Well, not really. Maybe just a little.

Eddiealso provided carafes of water and glasses. Perhaps he could read my thoughts. “Bon appétit!”

Diego and I took a spoon and fork each.

I watched as Ophelia scooped a piece of the first cake, and lifted it to Levi, who slowly–like we had all the time in the world to eat cakes–opened his mouth to take the dessert. So this was his game. I copied Ophelia’s actions and fed Diego a piece of the cake.

“Hmmm, very good. This is definitely a winner,” Diego offered his opinion. He used his fork to lift a tiny slice to my mouth. “Here you go, my sweet.”

My throat dried up upon hearing Levi’s term of endearment to me coming out of Diego’s lips. In my peripheral vision, I could see Levi’s jaw drop. I made sensual sounds with my mouth. The cake certainly tasted divine.

I nodded as he continued to feast on the cake. “So good.”

“Sandrine’s allergic to nutmeg. And if I’m not wrong, I detect a hint of it in the flavors,” Levi told Eddie in a matter-of-fact way.

Damn, I dropped the ball on that one. I knew she was allergic to it. I had it in my notes somewhere. “Yes, that’s correct. Thanks for reminding us.” I sent a quick, shy look toward Levi. “Shall we try the next one?”

The same thing happened to the second cake. Ophelia fed Levi. Diego fed me, and I fed Diego. And every single time he did, Levi would move his head from side to side and rub the back of his neck.

Levi noted the complimentary flavors of the almond and the hint of coffee and chocolate of the second cake.

It was good, but it wasn’t elegant enough.

When we got to the third cake, my favorite, I added extra oomph in my moan, closing my eyes as I let the flavors of fresh berries and the sweet-tart combination of the limoncello icing explode in my mouth. My hands were pressed against Diego’s broad expanse of chest, and as I let the last bit of sweetness melt on my tongue, I fisted Diego’s white shirt. I opened my eyes marginally in what I hoped was a seductive gaze and smirked at Diego.

“That good, huh?” Diego’s face was plastered with a wide, knowing smile.

“It’s a perfect cake for a summer wedding,” I replied.

“It’s a bit tart.” From the other side of the table, Levi’s words sounded petty.

With my hands still over Diego’s shirt, I turned to Levi. “Tart?” I raised an eyebrow.

Levi crossed his arms over his chest, exposing the tanned, toned forearms under the sleeves of his light blue button down. He narrowed his eyes at me. I shot daggers at him.

“Why don’t we have a sip of water before the last cake?” Eddie suggested. He poured us a glass each, even offered one to Oh-feel-yah.

After a couple of minutes, we continued. I’d had the pleasure of tasting this cake before with Jake when we were dating. Back then, he had always made me promise that I would buy this cake for his next birthday. I never had the chance. Not for his birthday, at least.

I was pretty confident that this was the cake he would want at his wedding. Eddie could add some elegance to it by using a different type of icing, rather than a ganache so that he could display his skills in cake decorating.

Levi grabbed a fork and spoon off the serviette, cut a small piece with his fork, and pushed with his spoon. He raised the piece to his own mouth, and I could tell that he loved it. He made a small moan of approval.

I gave Diego a piece, and he rolled his eyes as he ate the cake. “Divine. Simply divine, Eddie. You’ve outdone yourself. Can we take this home?  I can think of many ways I’d like to eat it.”  There wasn’t just a subtle hint in Diego’s eyes.  He made sure that everyone in the bakery knew what he meant.  My cheeks burned.

I swallowed the nervous anxiety in my belly, smiled at Diego, and took the smaller piece of cake on his fork. It was better than sex. Well, at least the sex that I’d had. The decadent bittersweet flavor of the moist cake paired with the sweet-saltiness of the peanut butter mousse and the rich ganache was to die for. I didn’t close my eyes as I tasted. Instead, I trained them toward Levi.

He was raptly watching me. We held our gazes together. With the tip of my tongue, I licked ganache off  the corner of my lips, then bit my bottom lip. I might have seen him tremble, but it was so slight that I wasn’t sure if I’d imagined it. 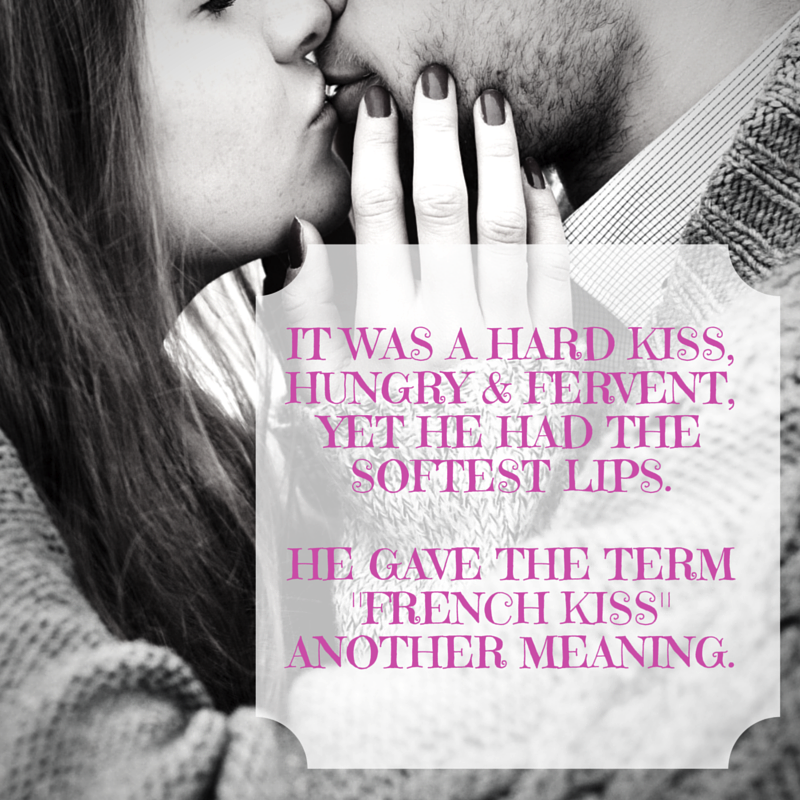 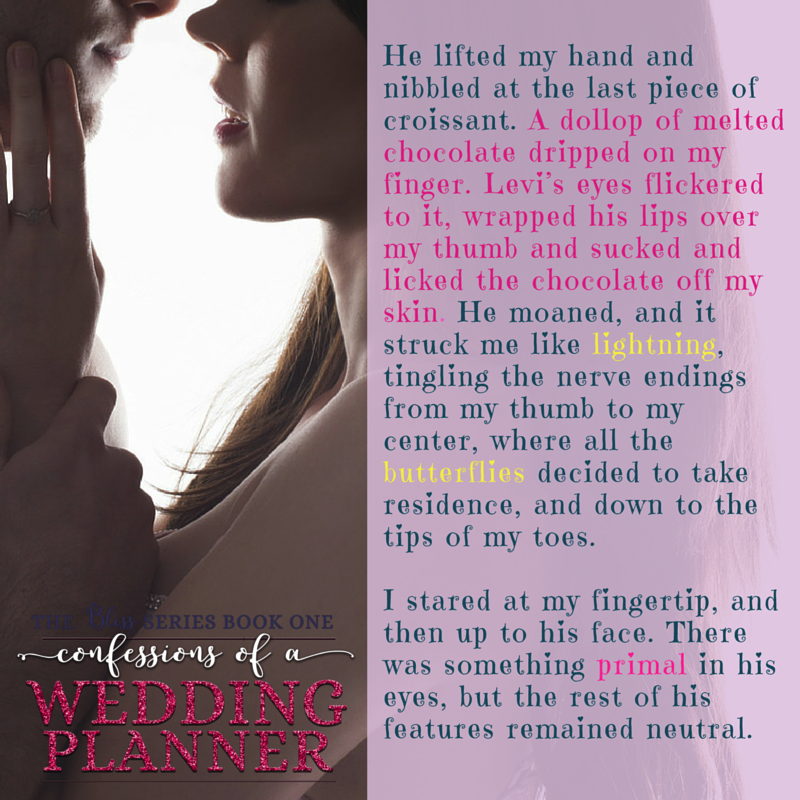 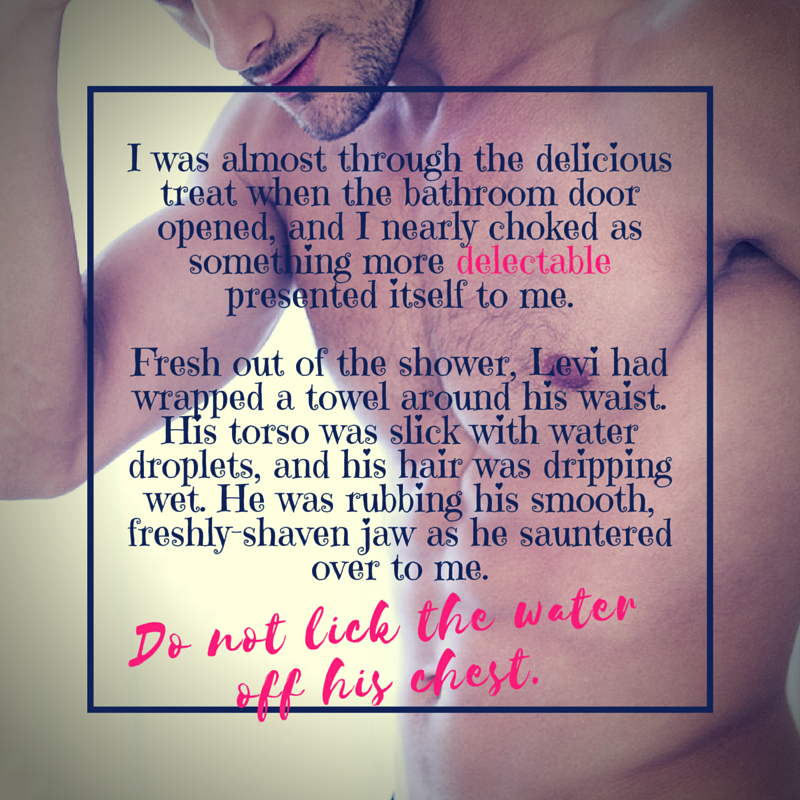 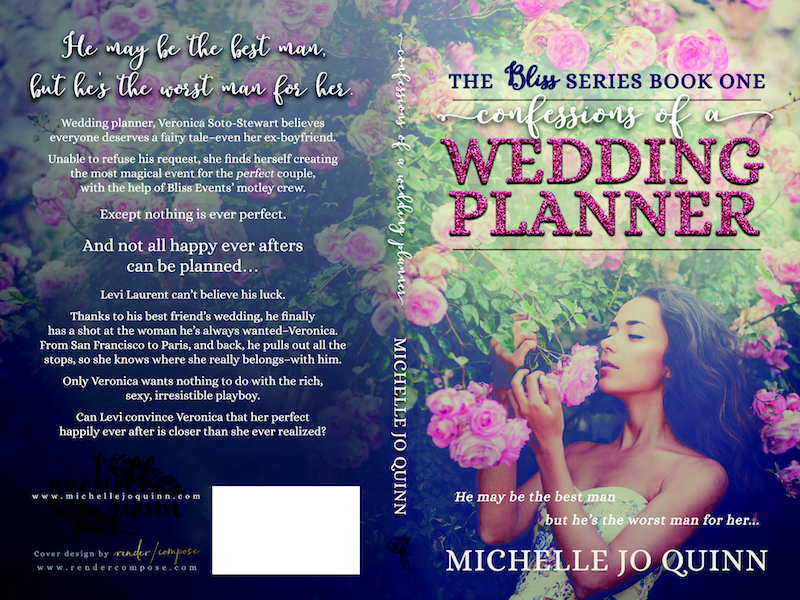