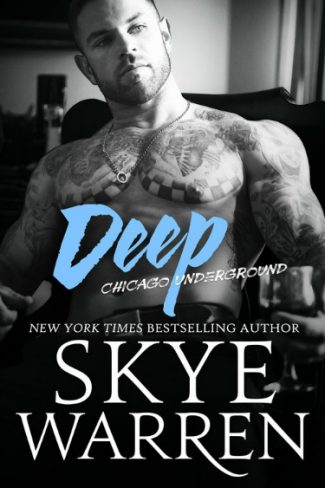 Philip Mason has all of Chicago under his thumb. Except me.

We met in a perfect storm of violence and lust. He saved me and then disappeared from my life. Now I pretend I never knew that kind of darkness. I focus on midterms and campus parties, as if they can wipe the slate clean.

Then he turns up outside my dorm room—wounded and barely conscious. He’s the head of a crime syndicate, a powerful man, but he needs me now. There are traitors in his midst.

I can help him, but I can’t fall for him. 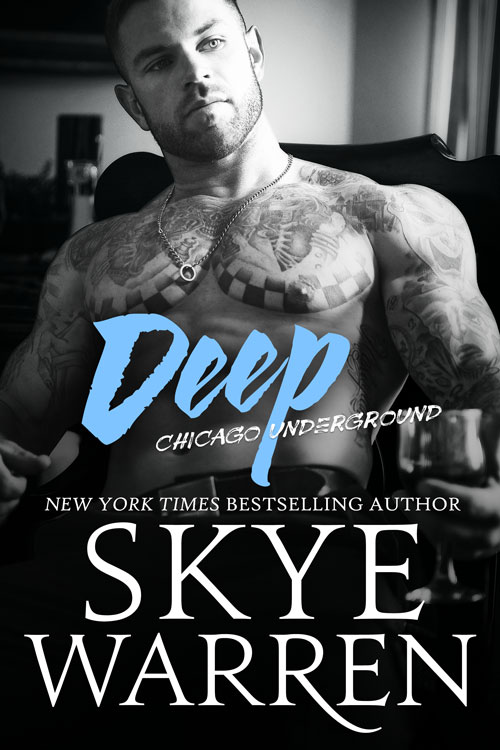 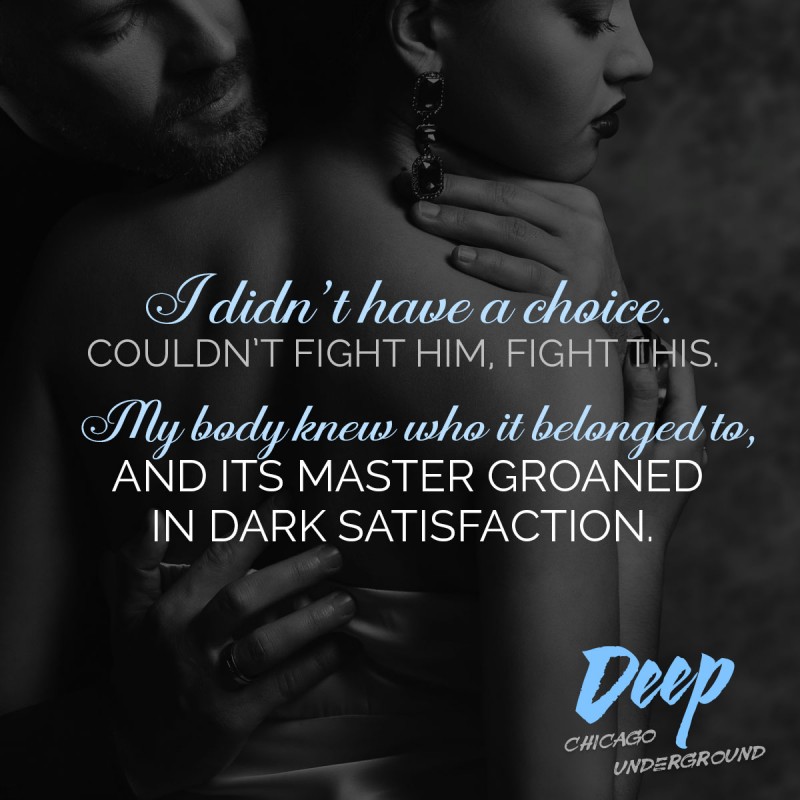 It was dark outside, grown late, and I hadn’t eaten dinner yet. Somewhere out there, Philip was probably dining with crystal and expensive wine. Meanwhile I’d probably order a pizza with one of those coupons by the door.

A low sound raised the hair on my neck.

My gaze swept over the small dorm room. From here I could see the tiny bedroom area and the kitchenette. I could see almost the entire space. Empty.

Maybe it was just one of my neighbors getting busy and—

I crept over and looked out the peephole. An empty hallway bulged in the distorted lens.

Now I was doubting myself. Had I actually heard something? Maybe it had come from the dorm room across the hall. When I first moved here, it had been shortly after my “ordeal,” as my adoptive mother called it. I had jumped at every sound, both real and imagined, more traumatized by my brush with danger than I’d wanted to admit.

My gaze snapped to my phone.

I could call my adoptive mother right now, but I knew she wouldn’t want to be bothered. I could call the building management, but I knew what would happen. The same thing that had happened last time I called them. They’d send my floor advisor to check on me. If there was anything scary in this hallway, she’d have to face it first.

And if there wasn’t anything scary, if it was my imagination again, the PTSD I didn’t want to acknowledge, well then everyone would know how fucked up I was inside.

No, I had to be overreacting. This was nothing. There was no one in the hallway. And even if there was, it would be some drunk guy, passed out on the wrong floor.

I’m a normal college student, I reminded myself. I’m not afraid of anything.

Both of those things were lies, I was neither normal nor brave, but at least I could send a drunk frat boy on his way.

I opened the door a crack. Nothing.

Relief filled me, and I opened the door wider.

A body slid inside, slumped over without the door to support him. A short scream escaped me before I caught myself.

He was wearing a three-piece suit stained with blood, his expression slack, eyes glassy with pain and delirium. Philip.

Oh God, he was hurt. Really badly hurt if he couldn’t stand up. Horribly hurt if he’d ever have come to me of all people. I didn’t have time to process the shock of it, of seeing him again. I had to get him out of sight. If he’d been injured like this, someone was after him. Someone would want to finish the job. 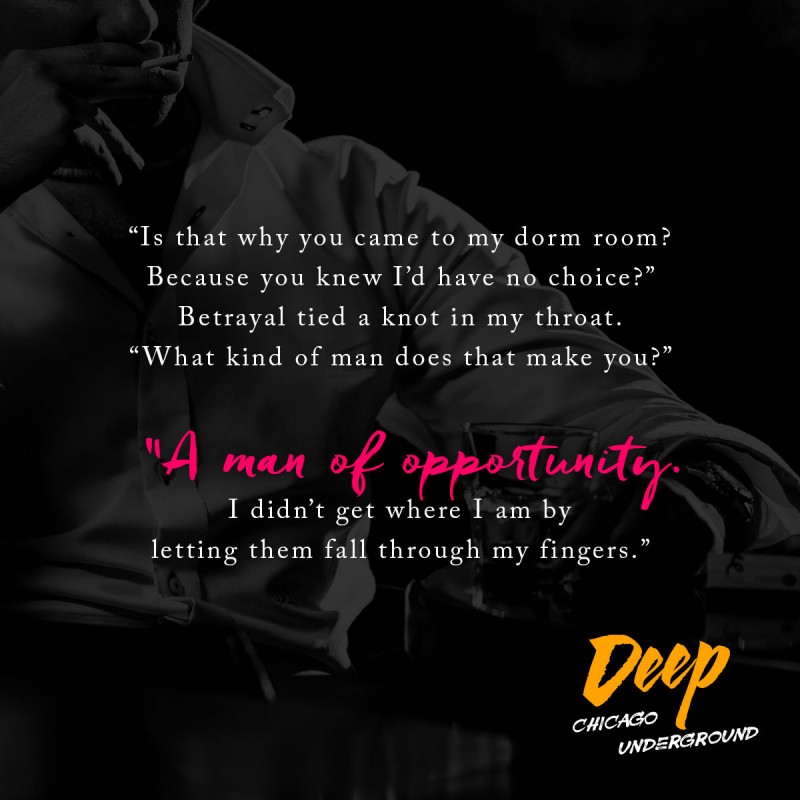 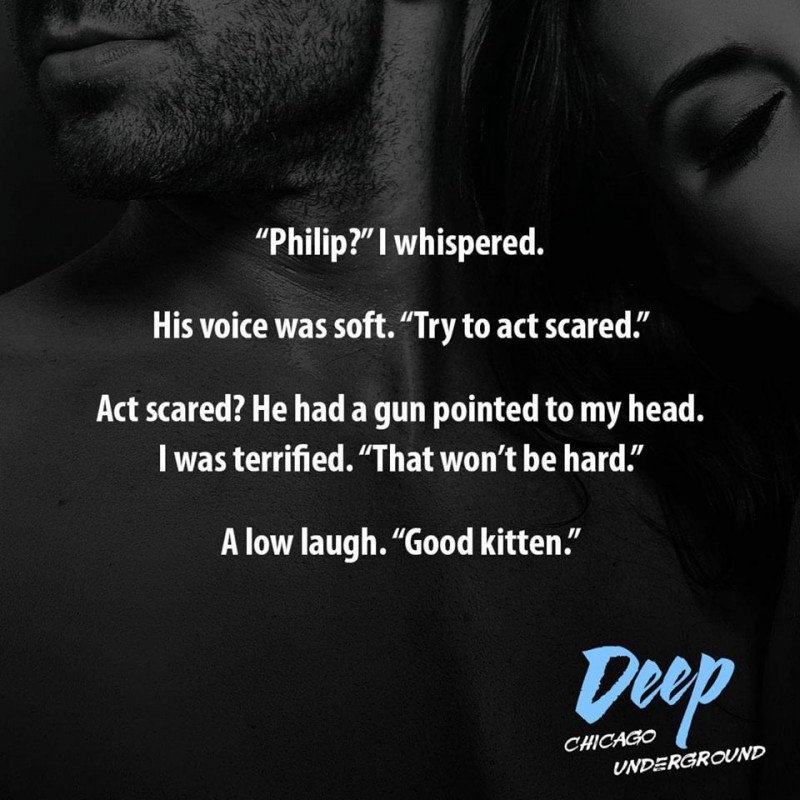 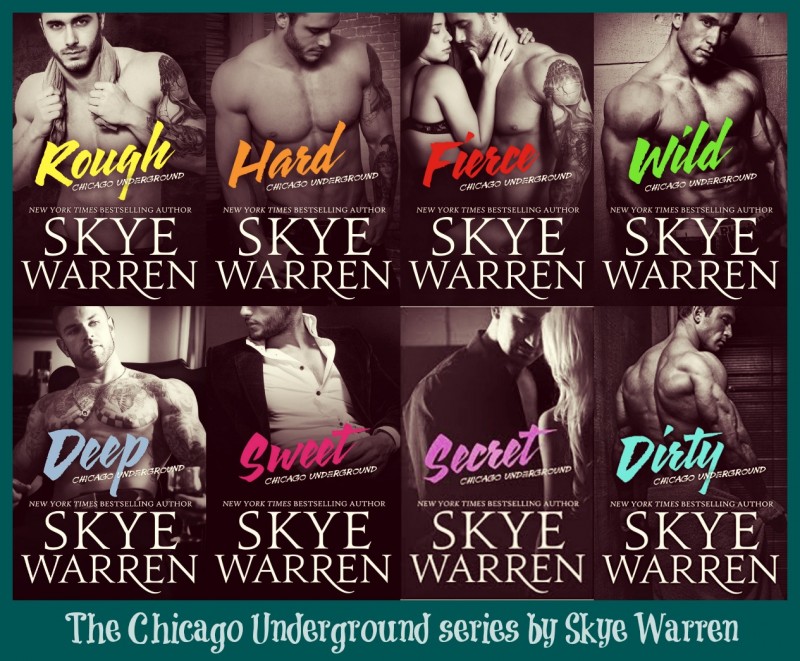 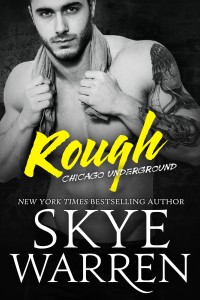 I have a dark secret, a pressure valve, a rare moment just for myself. On these nights I visit a club. There I find men who give me what I need. Men who aren’t afraid to take what they want. 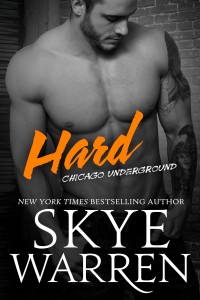 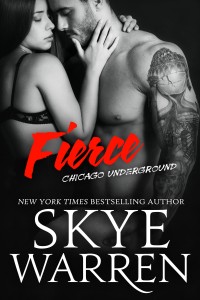 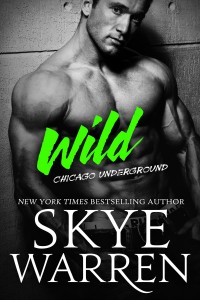 Once upon a time I was the girl who had everything, the clothes, the car. The rich dad who spoiled me. But the truth was, the only thing I had was my body. I used it to buy my way out.

I took a bite of the apple knowing full well what would happen.

That’s how I became a call girl. That’s the story of how I ended up in hell.

There’s only one man who makes me wish things had been different. One man who could never be with a girl like me. Luke is a cop. Untouchable. Unbreakable. And dangerous in his own way.

When I end up on the run, he’s the only one I can turn to. 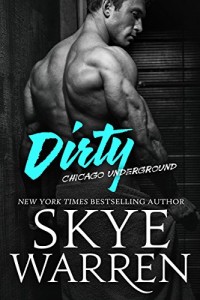 There’s no escape for me. I’m tied to some of the scariest men in Chicago. Bound so tight I’ll never get free.

Sin and pleasure. Crime and power. They give as much as they take. They mark me as one of their own.

I’ll do anything to survive, except bring Luke down with me. I won’t taint him. I won’t ruin the one good man I’ve ever met. I won’t turn him into a dirty cop.

Except he refuses to let me go.

Author’s Note: Dirty is a dark new adult romantic suspense in the Chicago Underground series. You can start reading Luke and Shelly’s story in Wild. 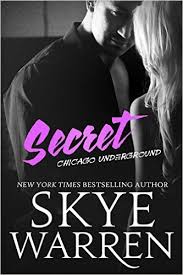 I’m the one with the dark past, the scarlet letter, the soul so black there’s no hope of redemption.

At least, that’s what I always believed…

Luke has secrets of his own, and the more I search, the more I’m afraid of what I’ll find. But I have to know, my survival depends on it.

He’s the man I love. The man who can destroy me.

Author’s Note: Secret is a dark new adult romantic suspense in the Chicago Underground series. You can start reading Luke and Shelly’s story in Wild. 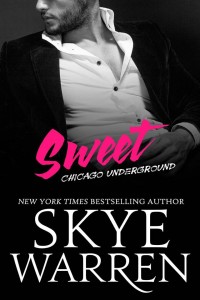 My brother is both powerful and cruel, which means I have a lot of enemies I’ve never met. He swears he’ll keep me safe, but what I want most is to break free. I especially want to break free with Drew, my brother’s lawyer.

I’ve spent my life under glass.

We shouldn’t be together, but everything about him draws me. His intensity, his kindness.

And the way he looks in those custom tailored suits.

One night when he’s outside my bedroom, I give him a sexy show. And in doing so, unlock pandora’s box. Drew shows me everything I’ve been missing. He touches my body and my heart, but when the truth comes to light, we’re both in danger.

The cost of my freedom may be the man I’ve come to love.