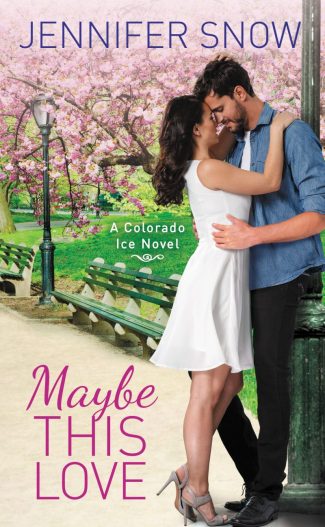 Hockey player Ben Westmore has some serious skills---on and off the ice---and he's not above indulging in the many perks of NHL stardom. When a night in Vegas ends in disaster, he realizes two things: 1) it's time to lie low for a while, and 2) he needs a lawyer---fast. But the smoking-hot woman who walks into his office immediately tests all his good intentions.

Olivia Davis doesn't need anyone derailing her career---or her dreams of starting a family---least of all a skirt-chasing player like Ben. But soon he's unleashing a full-court press to convince her that he's the real deal. She's slowly falling for his sweet, rugged charm, but with so much on the line, Olivia has to decide whether Ben can truly change---or if he's just playing the game. 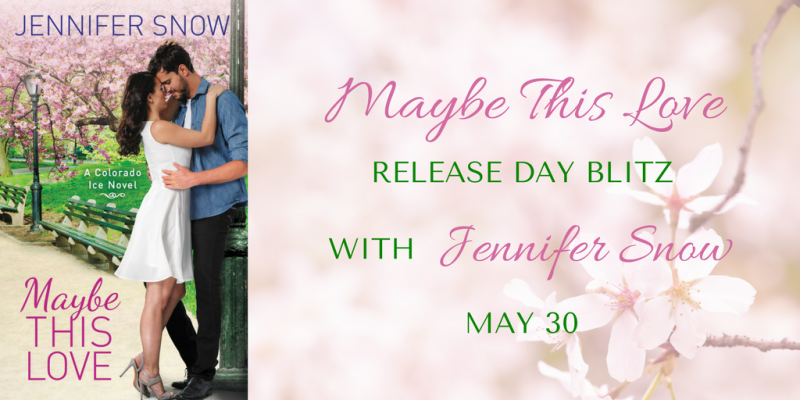 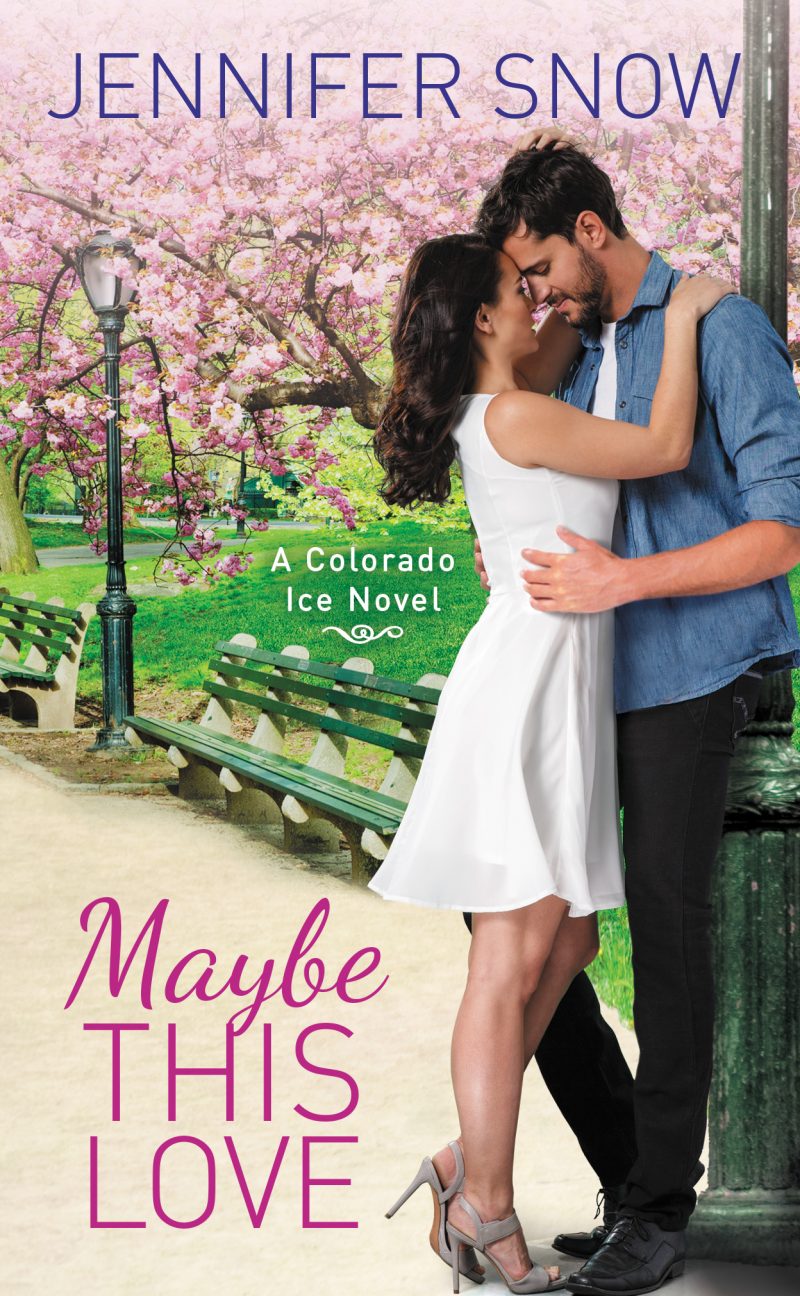 “Relax,” he said smoothly, his gaze locked on hers, his expression soft, unfazed—the look of a man not dancing with the lawyer who could ruin his life or at least playoff season. She had to learn this guy’s secret, because there was no way he was this unaffected. Yet, his hands weren’t sweating the ways hers threatened to, and the only heartbeat she could hear thundering was her own.

She forced a slow and what she hoped was unobvious breath. “I am relaxed. I’m not the one who should be worried.”

The palm of his hand spread across the exposed flesh of her back and she prayed the tingling sensation in her spine didn’t result in goose bumps. “So you’re saying I should be?” he asked, turning them in rotation to the steady beat. Despite her resistance to this dance, her hips betrayed her by swaying in sync with his, and her feet kept time with his every step. He led with a silent authority that she was forced to follow. And for the first time in her life, she wasn’t hating giving up control.

He brought their joined hands between them and placed a finger to her lips.

Her heart all but stopped.

“Why don’t we save the shop talk for the courtroom? Let’s just enjoy this dance.”

She swallowed hard, but nodded. Dancing in silence, she could do that.

Unfortunately, Ben seemed eager to chat. “How long have you been practicing law?”

He expected her to remember stats as his hand on her back dipped slightly lower, his hold drawing her even closer? It had been far too long since she’d been enveloped in the arms of a man who felt and smelled so strong, so confident…How long would it be again if she went ahead with her plans for a baby? She pushed the thought aside when he stared at her, still waiting for an answer. “Twelve years,” she said, cutting out her time as a junior lawyer and intern, so as not to age herself. She knew from his online Wikipedia page that he was thirty-four, two years younger than she.

“If I say no will I get the inspirational ‘do what you love and it will never feel like work’ speech?”

She shook her head. “Actually, I really do enjoy my job.” She couldn’t say watching families get ripped apart by bitter divorces was something she loved without sounding like a sociopath, but she enjoyed her career.

“Can I ask why only professional athlete divorces?”

Ben laughed. “So one guy ruined it for us all, huh?”

She nodded then shook her head. “No. Everyday cases—with normal, everyday husbands and wives—just seemed a little too…real,” she said.

His blue eyes burned into her and his grip tightened on her hand. “So, guys like me aren’t real?”

She swallowed hard. He felt real…He felt more than real—he felt amazing. His arm wrapped around her felt deceivingly safe and his hand holding hers felt warm and secure. God, she could see herself giving in to these painfully real feelings…“You’re probably one of the more real ones,” she said, hoping he didn’t detect the slight quiver in her voice.

He nodded slowly as though unsure whether her words were a compliment. “Have you ever been married?” he asked, rotating them in time to the music.

“That’s crossing a line into personal.”

He smiled. “Guarded much?”

The effect of his smile from a safe distance was knee-weakening. This close, it was downright dangerous. She quickly averted her gaze to the other couples on the floor. “How long is this song anyway?” She felt trapped the way she had in tenth grade when Robbie Gropes-a-Lot Harris had tricked her into dancing with him at the winter formal to “November Rain”—the full eleven-minute extended version. Except Ben’s breath smelled minty fresh and not like tacos, and his arm draped across her lower back made every fiber in her being spring to life, making her want to flee for a completely different reason than the one Robbie had evoked.

“Do I make you uncomfortable?”

Damn right. And it should be her making him uncomfortable. There needed to be a power shift between them and fast. “Of course not.”

He pulled her closer. “You make me uncomfortable,” he murmured, his expression suddenly serious. Every inch of her body was pressed to his and she could barely catch a breath. Dancing was a really bad idea—a torturously bad idea. Being in his arms reminded her of all of the things she’d sacrificed for her career, of all the things she’d told herself she didn’t need…

“I don’t mean the divorce case. I mean you.” He touched her cheek and her skin burned. Thank God he was holding her so tightly because she couldn’t trust her legs.

Their stare locked and held for what could have been a lifetime, as everything seemed still and quiet around them.

The song had ended.

She yanked her hand free of his and stumbled away from him, inhaling a gulp of air into her deprived lungs. “Well, dance is over. I’ll…uh…see you.”

He nodded, the charming polite smile back on his face and for a second she wondered if she’d imagined the intensity in his gaze seconds before. “Goodnight, Olivia.”

Her own name sounded foreign coming from him. She longed to hear the sound again, and she was an idiot for wanting something so dangerous. The NHL’s biggest playboy had just worked his charm on her, and she’d lost all common sense.

She turned and headed straight for the table, leaving him on the dance floor.

She had to pull it together, but she also had to admit the unfortunate truth. Never before had she been tempted to kiss the enemy.

Copyright © 2017 by Jennifer Snow. Reprinted with permission of Forever. All rights reserved. 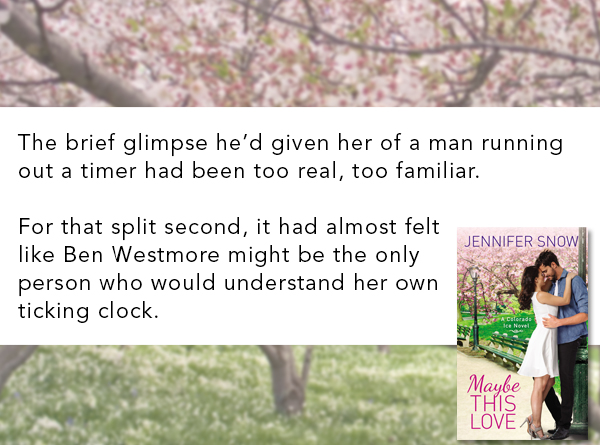 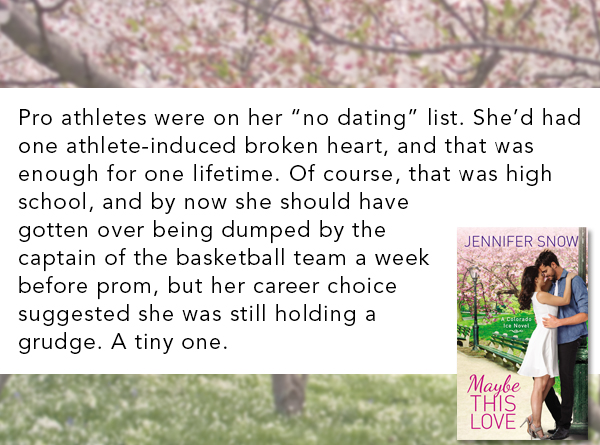 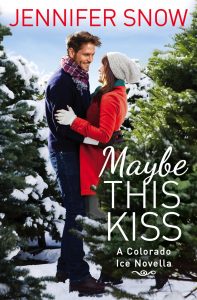 Love is always worth the risk…

Neil Healy was happy to be promoted to Air Force lieutenant colonel, but he’s less than thrilled that the new job has brought him back to his hometown. The memories alone could kill a man, to say nothing of actually seeing the woman he never got over. Neil knew avoiding Becky Westmore would be impossible, but he didn’t expect the chemistry between them to be as strong as ever.

All Becky wants this holiday season is to get through the month of December with her sanity intact. Not helping? Her ex-boyfriend’s return to Glenwood Falls. Even after a decade apart, Neil still makes her feel in ways no other man has. But Christmas is a time for miracles, and maybe Becky’s will be a second chance at first love. 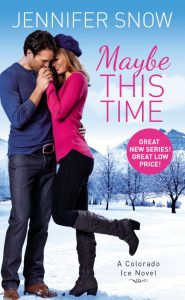 Starting over means a second chance…

Abigail Jansen is done with hockey… and hockey players. After leaving her two-timing NHL-star husband, Abby decides to start over in her hometown of Glenwood Falls, Colorado. There she doesn’t have to deal with people gossiping behind her back or hear the word “hockey”—until her daughter tries out for the junior hockey team. Now Abby has to face her fears… and coach Jackson Westmore. He’s tall, dark, handsome—and happens to hate her.

All through high school, talented hockey player Jackson Westmore had a crush on Abby, but he would never make a move on his best friend’s girl. He gave her the cold shoulder out of self-preservation and worked out his frustrations on the ice. So when Abby returns, newly divorced and still sexy as hell, Jackson knows he’s in trouble. Now even the best defensive skills might not keep him from losing his heart. 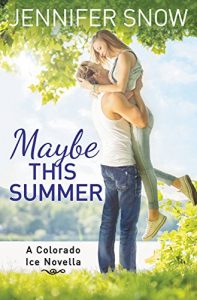 Owen McConnell is used to being ignored. After all, it’s only when he appears as the Colorado Avalanche’s team mascot that he gets all the attention. When the costume is off, women tend to gravitate toward his famous hockey player friends. But after he meets lovely, damaged Paige Adams, he knows he can be the star player for her. She’s raising funds for the hospital burn unit, and Owen’s determined to help her out—and sweep her off her feet.

The burn unit has been near and dear to Paige’s heart ever since the doctors helped her after a vicious attack. Yet the scars—both emotional and physical—haven’t faded as much as she’d hoped. She’s closed herself off from relationships, and the thought of opening up is terrifying. But Owen’s sexy charm might be just the push Paige needs to start loving again. 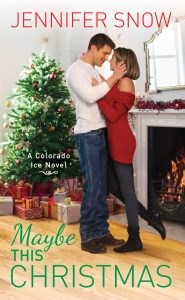 One more game. That’s all that stands between NHL star Asher Westmore and a major career milestone. But then his brother bashes him against the hockey boards, sidelining him for months. Over Christmas holidays, no less. If staying off the ice doesn’t drive him crazy, staying with his family will. The only bright spot amidst the mistletoe and twinkle lights: His best friend, Emma, is a physical therapist. And working out with her improves his body and his spirit.

One last time. Emma Callaway was in trouble the minute she and Asher added benefits to their friendship. How is she supposed to resist a funny, caring guy who makes her toes curl? Her heart was safe while he lived in a different state. Now that he’s back home recuperating, though, it’s only a matter of time before she blurts out her feelings. Emma’s only hope is that with a little holiday magic, she’ll get the best Christmas gift of all.

Jennifer Snow lives in Edmonton, Alberta with her husband and son. She writes sweet and sexy contemporary romance stories set everywhere from small towns to big cities. After stating in her high school yearbook bio that she wanted to be an author, she set off on the winding, twisting road to make her dream a reality. She is a member of RWA, the Writers’ Guild of Alberta, the Canadian Authors Association, and the Film and Visual Arts Association in Edmonton. She has published over ten novels and novellas with many more on the way.