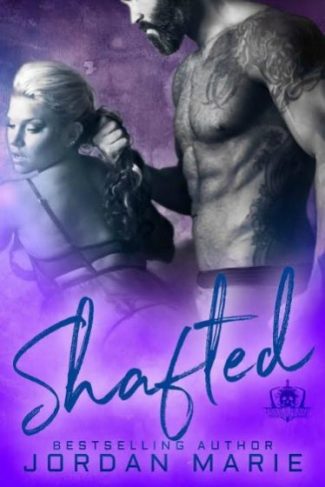 She’s barely legal. He’s more than twice her age.
None of it matters.
He’s about to show her why he’s nicknamed Shaft.

Until Jax, I’ve never even had an interest in boys.
That’s just the thing though. Jax isn’t a boy.
He’s all man.
First, I gave him my innocence.
Second, I gave him my heart.
But when my family finds out about us…
I just hope I don’t get him killed.

She’s the granddaughter of a rival club’s President.
She’s barely legal and way too innocent for me.
I’m too old. Too hardened by life, but one taste of her and it’s too late.
I’ve claimed her as my own.
And I’ll die before I let anyone take her away from me.
Unfortunately, it might just come to that.
Bree says we’re soul mates.
Fated for each other.
When I’m staring down the barrel of a gun about to lose everything.
It seems like life fate might have given me the shaft. 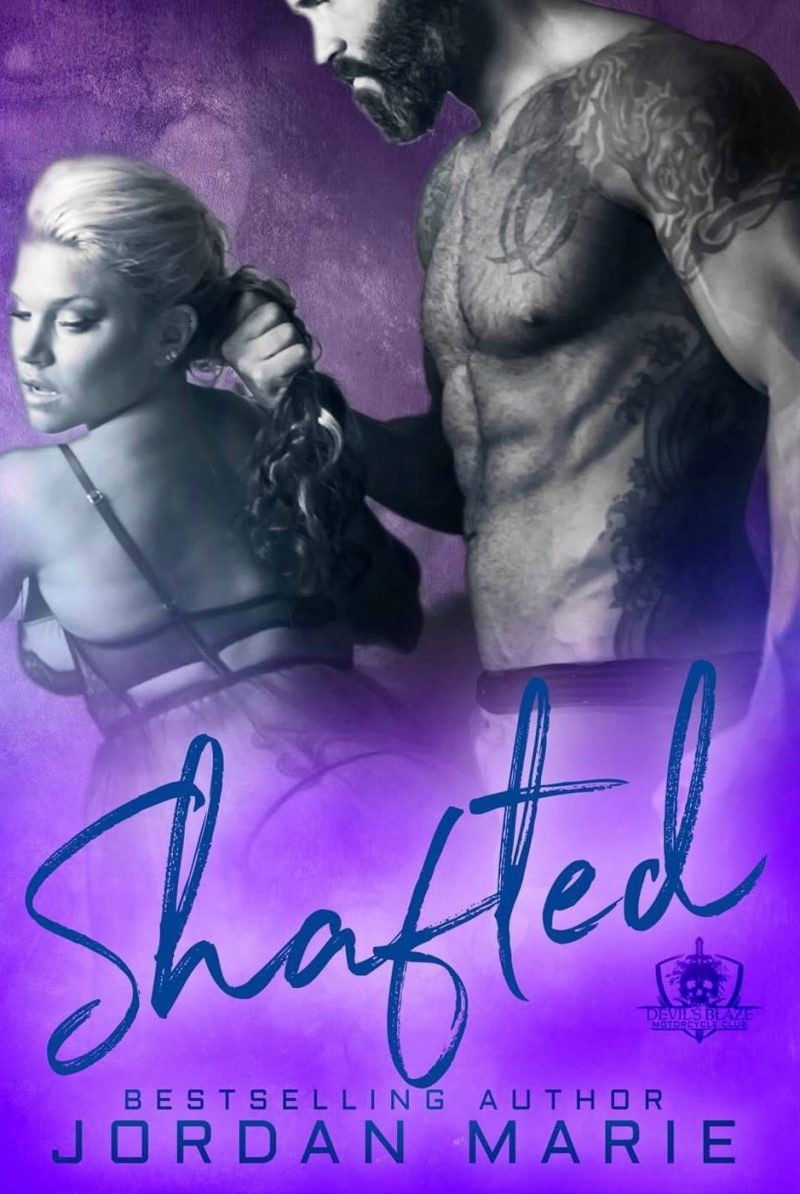 None of it matters.

He’s about to show her why he’s nicknamed Shaft. 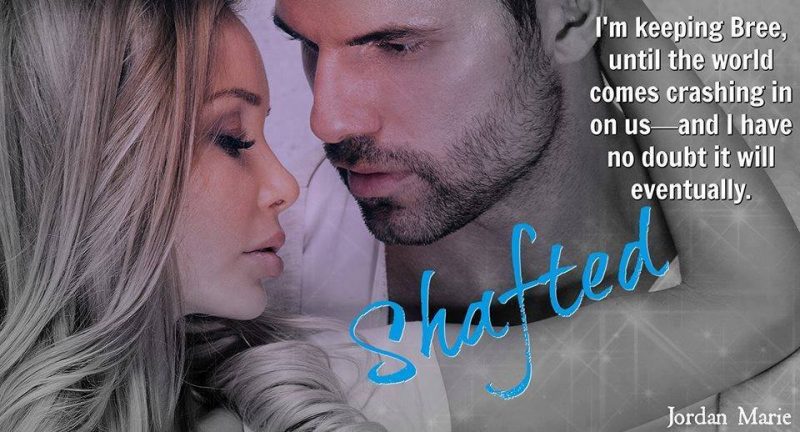 “Fuck man,” I groan, all but falling down in the chair.

“Rough day old man?”  Briar asks, and I flip him off.  Bastard has a right to laugh. He and his old lady, Stephanie conveniently picked today to spend at Cumberland Falls.  Conveniently, because today is the day the rest of the brothers and myself worked like fucking dogs, fixing up the outside of the club for BB and Diego’s birthdays. BB is a nickname for Torch and Katie’s little boy, and Diego is the president, Skull and his old lady Beth’s son. The two women are sisters and somehow managed to have kids on the exact same day just minutes apart. The Pres is going all out to make sure there’s a huge celebration for the boys’ second birthday.

It sure as hell don’t feel like they should be two already. Time flies fast, and damn if my body ain’t living proof of that today. I feel old all the way down to my bones. I’ve been a sworn in member of the Devil’s Blaze for the last two years, getting the nod from the other members during all that shit with Beth, Katie and the fucking Donahues.

It’s what I wanted, what I worked for, not even minding that I was serving as a pledge with men ten or more years younger than me.  Now at forty, I’m probably one of the oldest members. It didn’t used to bother me, but lately I’m feeling like I missed out on something. Especially when men my age, or close to it have all settled down with old ladies, and here I am alone.

It’s not like I haven’t had relationships, I have. It’s just none of them are even slightly memorable. More often than not, I wish to hell I could forget them. I look through the room and it’s mostly quiet. The new prospects are partying with a few of the club girls.  Even that—easy pussy, doesn’t interest me tonight and that is just fucking depressing. The club needs new women or something.  Hell, maybe I need to get off my ass and get out and find a woman, a woman of my own. That just seems like too much fucking effort right now. Especially when I’ve been breaking up cement and shit all day to make way for the new patio that’s being poured tomorrow. My back hurts like a motherfucker.

“I think I’m crashing for the night brother,” I tell Briar, taking the last swig of my beer.

“Damn, you are getting old,” he says with a chuckle as he shakes his head.

“Nothing here seems to be holding my interest tonight. Club needs some new talent.”

“You need to settle down brother. Find you a good woman like my Steph,” he boasts.

“I think all the good ones are probably gone.”

I look around the room one last time. Just as I’m about to write the night off as a loss, she walks in.

He looks around the room. “Who?”

“The chick that just walked through the door,” I tell him without taking my eyes off her. She’s fucking beautiful, and I don’t mean that in a normal way. Hell no, this chick could have just walked off the pages of a magazine. She’s got hair that you can’t really call blonde. It’s like multiple colors, blonde on top then slowly shifting to darker locks on the bottom, and every now and then there’s a strand of almost white. It’s cut so it curves toward a perfect face reaching below her shoulders.  She’s got red lips that could make any man beg—including me. She’s wearing a black jacket, not leather, it’s more polished, expensive, though the look is similar.  Under that she has a white shirt that clings to tight, perky breasts that are easily a ‘C’ cup. Perfect size to fill my large hands. Tight blue jean shorts that cling to her curvy ass and show off long fucking legs, that’d I’d give my eye teeth to feel wrapped around me. She’s wearing flip flops and fuck, even her toes are sexy, painted clear with bright white tips. There’s a silver ring around one of her toes and even that looks sexy. She looks around like she’s searching for someone.  Me baby. You’re definitely searching for me.

Almost as if she can hear me, she looks at me. Those sweet red lips give into a smile, and I need her closer, so I can tell exactly what color those eyes are. I can feel my dick hardening. I reach down under the table to adjust him. I’ll be letting him play tonight, that’s for damn sure. I stare straight at the woman of my dreams. Is it coincidence that her tongue comes out to brush against her top lip, or is she trying to drive me in- fucking –sane?

“Down boy.” Briar puts his hand on my chest as if to hold me back. “That’s not for you.”

“Why the fuck not?” I shove his hand away. “She been claimed by one of the other brothers?” Please say no. Briar laughs, and as much as I hate it, I pull my eyes away from my dream woman and look at him. “What the fuck do you find so funny?”

“The fact that you’re setting yourself up for a whole hell of a lot of trouble.”

“Quit talking in circles, Briar. I got more important shit to do.” Like her.

“You’re starting to piss me off man.”

“That girl is off limits.” His tone is hard and matter of fact.

His eyes harden. “Her family.”

“Give me a break. Do I look like I give a fuck?” What the fuck has he been moking?

Standing up, I ignore the son of a bitch. My dick is so hard I could lay fucking bricks. I’ve got a much softer place in mind for him though.

“Something else might talk you out of it though.”

“I doubt it,” I repeat, walking toward my future.

“She’s jailbait,” he calls out after me.

Motherfucker.  I stop mid-step, and I swear my dick would cry if he could. 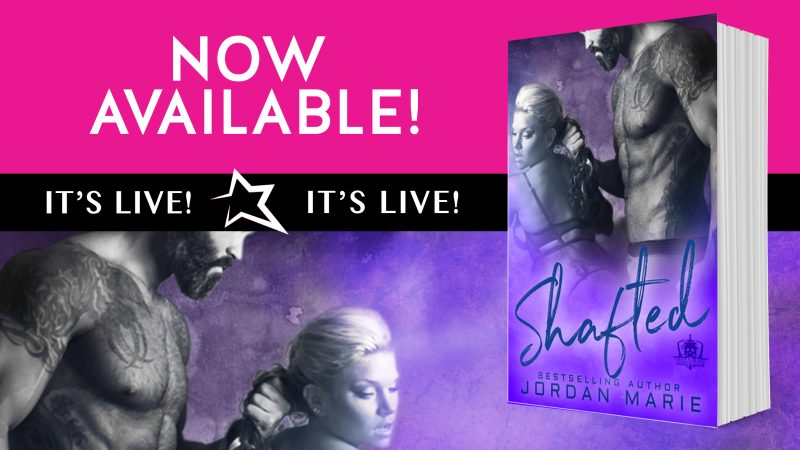 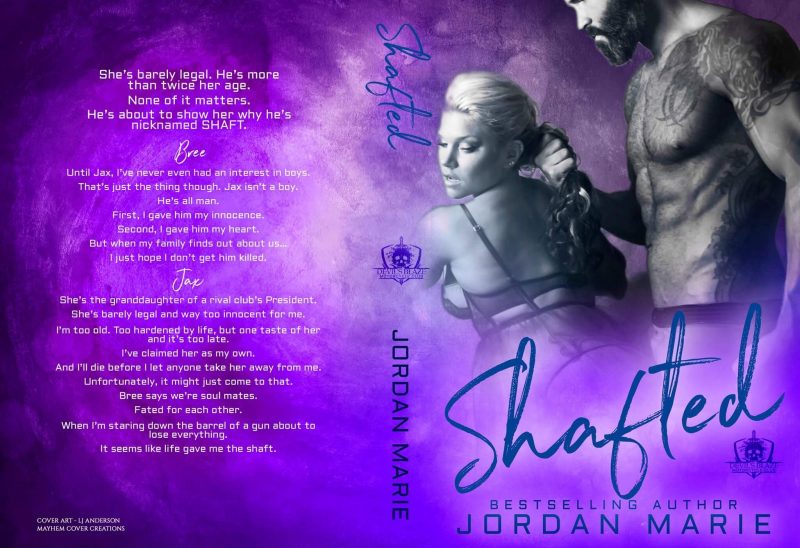 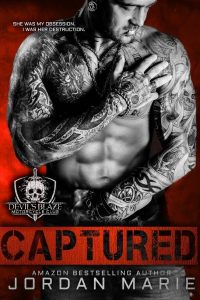 She was my obsession.
I was her destruction.

My life is not my own. I belong to the family. Every step I make is dictated.
Until him. Skull.
The only man I’ve ever loved. The only man I will ever love.
His touch inflames me.
I can’t stay away—even if I should.
I gave him my body and my heart.
To keep him safe, I will sell my soul to the devil.
The lies began with our hello.
Now, I’m captured by them.

There’s an animal in me that I keep hidden.
Beth calls to him. She tempts the monster and lures him to the surface.
I’m obsessed with her. I can’t stay away, even when doing so puts my entire club in danger.
Her blood is on my hands.
I formed her to fit only me.
I was her first and if I have to kill everyone in our way. So be it.
I will be her last.
She is mine. 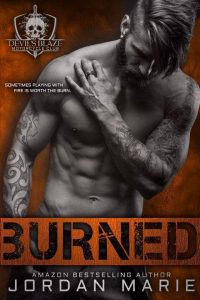 When you play with fire, you’re bound to get Burned…

He is a very bad man. There is nothing good about him…
Unless you count the things he does to me between the sheets. Those are good, very good.
Everything else about him is bad to the core.
One drunken night of bone-melting sex should have been the end of it—especially since I woke up alone.
Until he shows up at my door complete with handcuffs. I hate him for what he’s doing. Too bad my body can’t resist him.

She has a body that makes men beg. I had to have her.
I didn’t realize one night with her would be a drug—one I’d crave over and over.
Katie’s past brings me to her door. I should walk away. I can’t.
My President asked me to do this job and technically, I am. I’m doing her against the wall, in the shower, on the counter, the table and occasionally even the bed.
The heat between us is intense and white-hot like an open flame.
I can’t walk away, even for my President, the man I swore to follow into hell.
I warned her I am no one’s happily ever after. I’m too dark.
I’m more of a nightmare.
She chose to play with fire. I did too.
It’s too late, now we’ll both be Burned. 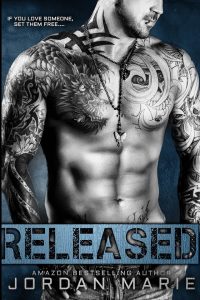 Their Love nearly destroyed both of them.
Can they find their way back to each other?

Can you love and hate the same person?
I fell in love too fast, too young.
I made decisions I thought would protect the ones I love.
Now I’m hated for them.
Skull is the love of my life.
But our life was wrapped up in lies.
We were captured by them, and left with nothing when they exploded.
How much can a heart take before it breaks, and just doesn’t care anymore?

Everything Beth and I had was a lie.
I claimed her, but she left me broken.
Letting her back in would be a mistake.
Fool me once… but never again. Never.
I won’t allow myself to be weak again.
A man can only take so much.
I’m done… or maybe not… 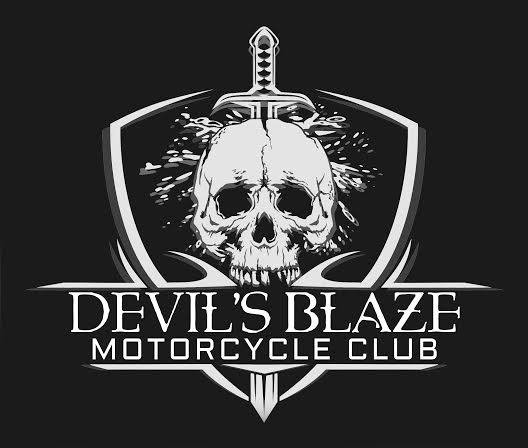