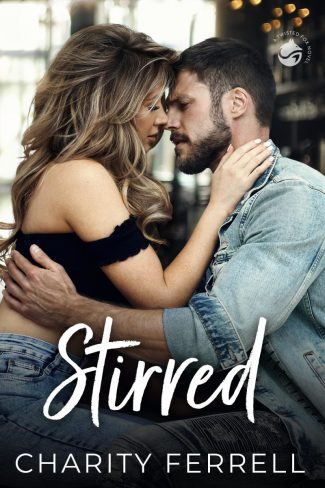 I don’t want him.
I can’t do this.
That’s what my ex said after our son was born, leaving me a single dad.

These days, my world consists of two things: Noah and my bar.
Until her—the woman I want —but can never have.
My ex’s sister wasn’t supposed to be stirred into the mix.

Even though I try to push her away, my son falls in love with her.
As much as I want to keep my distance, I can’t break his heart.

Lines become blurred, and fighting our attraction becomes nearly impossible.
Even though we know it’s wrong, desire doesn’t always fade away.
As soon as we cross that line, nothing will be the same and everything will fall apart.
And it does. 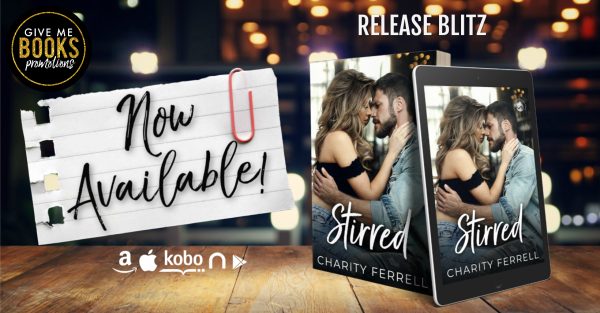 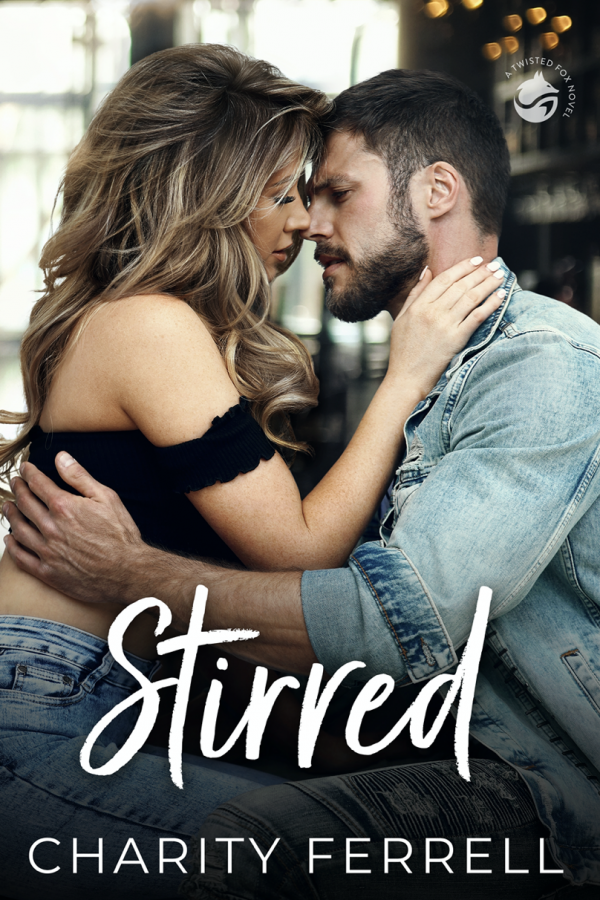 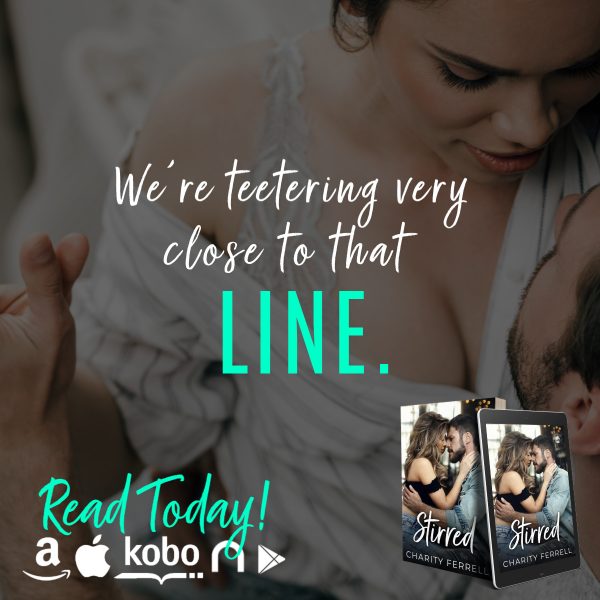 Three hours until I can go home, finish that box of Thin Mints I shouldn’t have bought, and binge-watch a show on Netflix.

Netflix and story of my life.

“Tell me he finally agreed?” Lauren, our charge nurse, asks—referring to the appendicitis patient who’s been refusing an appendectomy all night.

I nod. “After his wife promised to buy him a new TV.”

She scoffs. “I’d love to say someone being bribed to have life-saving surgery is a shocker, but after working in the ER for so long, I’m not easily shooketh.”

“Tell me about it.” I glance around the emergency room. “What’s next for me?”

It’s been a slow night at Anchor Ridge Memorial Hospital, and as much as that’s a good thing, it can get boring.

She points down the hall. “Exam room three. Five-year-old with a fever.” Her tone turns bubbly as she wiggles her shoulders. “Dad is super hot, by the way.”

I shake my head and tap my knuckles against the triage desk. “I’ll let you know if I need anything.”

“Ask him for his number,” she half-whispers with a thumbs-up.

I roll my eyes and dismissively wave my hand. “Absolutely not.”

“All work and no play makes Jamie a grumpy doctor.”

The door is cracked, and I knock, snatching a pair of latex gloves on my way in.

“Hello, I’m Dr.—” I stop, stumble back two steps, and cover my mouth with my hand.

My body tenses, and as soon as my gaze meets his, his jaw flexes.

I struggle for words as anger and disgust line his face.

Words I’d planned if this moment ever happened.

Unfortunately, those words become a scared bitch and run away.

“Cohen,” is all I manage in a whisper.

He stands tall from his chair, his narrowed eyes pinned to me, and moves to the side of the bed, blocking my view of the patient.

My attention slides from Sir Pissed Off, and I shift to the left.

“Oh my God,” I whisper, gaping at the little boy in the bed.

A little boy whose eyes are sleepy and nose is red and irritated.

Those sleepy eyes, a walnut-brown with a slight slant, match his father’s.

The same with his thick ash-brown hair.

But the dimple in his chin and heart-shaped face match hers.

“What are you doing here?” he repeats, his tone harsh.

If I wasn’t at a loss for words, my smart-ass self would throw out something along the lines of, What do you think, dumbass? I’m sporting a doctor’s jacket with my name embroidered on it.

It’s a challenge, wrapping my head around them being here, let alone dragging out my sarcasm.

“I’m your doctor,” I finally say before signaling to the boy. “I’m his doctor.”

“We want a different doctor,” he hisses, his voice low enough so only I can hear.

“I’m the only doctor on shift tonight.” I’m speaking to Cohen, but the boy holds my interest.

He’s watching this exchange, his eyes pinging back and forth between his father and me with curiosity on his tired face.

“We’ll go to another hospital then.”

“I want another doctor.” His broad shoulders draw back.

He raises a brow when I hold up a finger, turn, and scurry out of the room.

I rush over to Lauren. “Can you watch the boy in three for a minute? I need to talk to his father privately.”

She peeks up at me from her computer and tilts her head to the side. “Yeah … sure.”

Cohen is pacing the room when we walk in. “A word,” I say, jerking my head toward the doorway. Cohen’s attention darts to the boy, and he delivers a gentle smile. “I’ll be right back, buddy.” He gives him a quick peck on the head and swings his arm toward the door, his eyes cold. “After you, Your Highness.”

Lauren throws me a curious glance when he walks past her, and I shrug as if this isn’t about to be awkward city up in here.

As we leave, I hear Lauren asking the boy what his favorite cartoon is.

Cohen keeps his distance while I lead us into a private room, the one reserved for breaking bad news to families.

Too bad he doesn’t let me get more than his name out.

His deep-set eyes level on me. “This is a conflict of interest, Jamie. The nurse can help us. We don’t need you.”

The memories of the last time he said those words to me smack into me like a headache.

It was the last time I saw him.

The last time he looked at me with the same resentment.

I snort, anger biting at me. “What do you think I’m going to do, huh? Kidnap him?”

“Considering who you’re related to, who knows?”

“Wow.” I clench my fists to hold myself back from smacking him in the face since his words are like a slap in mine. “You have some nerve.”

It’d make for some bad headlines if a doctor slapped a patient’s father.

There’s no apology on his face when he holds up his hands. “Just saying it how I see it.”

“Then allow me to say it how I see it.” I thrust my finger toward the door. “You have a sick son in there, and it’s my job to treat him. Don’t like it? I don’t give a shit.” I shove past him, stalk out of the room, and don’t check to see if he’s following me.

“Everything okay?” Lauren asks, her eyes glancing over my shoulder, and I realize Cohen is behind me, still keeping his distance.

“Peachy,” I chirp before approaching the bed and smiling down at the boy. “What’s your name, honey?”

Even though I was sure it was him, my head spins at his confirmation.

I tenderly squeeze his arm, and my tone turns cheerful. “Hi, Noah. I’m Dr. Gentry. Can I ask some questions about how you’re feeling?”

Cohen stalks to the other side of the bed, his eyes on me, and Lauren migrates to the corner, her nosy ass interested in this shitshow.

“He has a fever,” Cohen tells me, his tone softer.

He scratches his scruffy cheek. “Over twenty-four hours.”

He shakes his head. “Not even sugar. I can hardly get him to drink, and he has no energy, which is very rare for him.”

His jerk attitude settles while we turn our attention to Noah. I ask question after question as I take his temperature and go through all the motions.

“Symptoms tell me it’s the flu,” I say, removing my gloves and tossing them into the trash. “We’ll do a test, and I also want to run some blood work to make sure we’re not missing anything.”

I smile at Noah. “We’ll get you back to feeling good in no time.” I give Lauren, who’s gathering supplies for the test, a head nod and leave the room.

I‘ll definitely be pairing wine with those Thin Mints tonight.

Lauren comes scurrying into the doctors’ lounge ten minutes later. “Whoa, what was that about? Dude was super nice to me but acted as if you’d pissed in his Cheerios.” 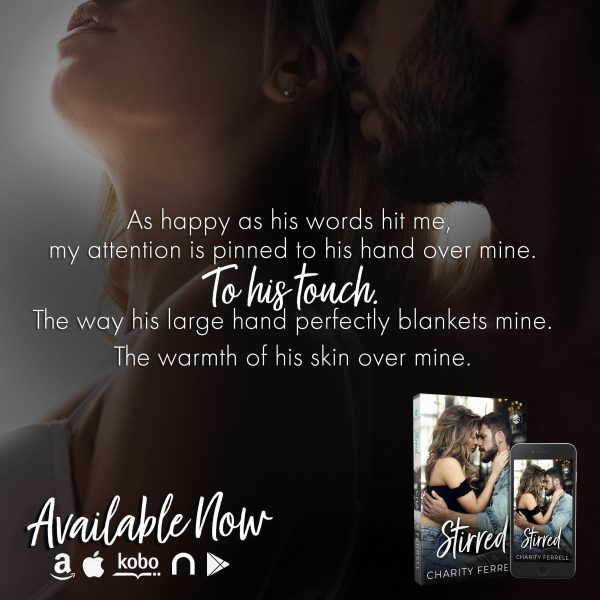 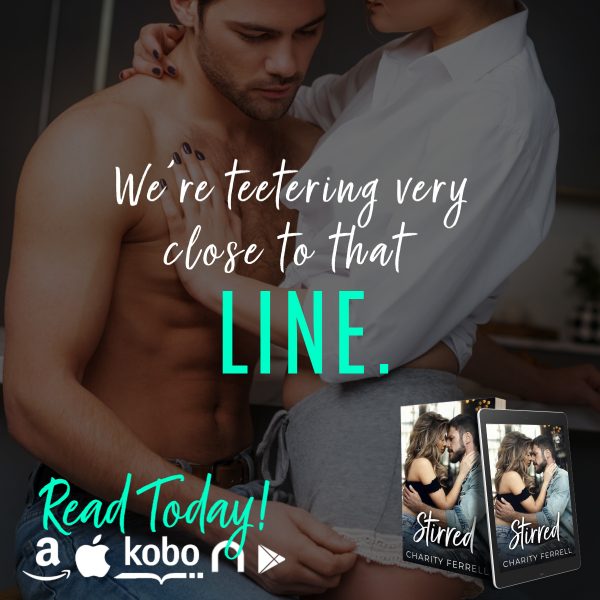 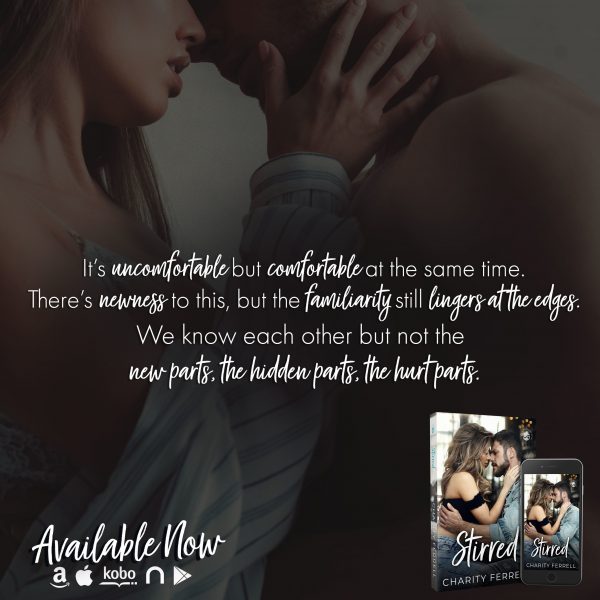 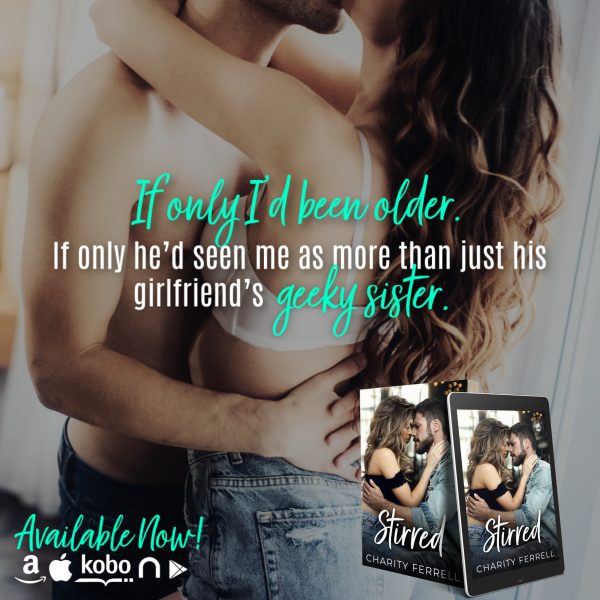 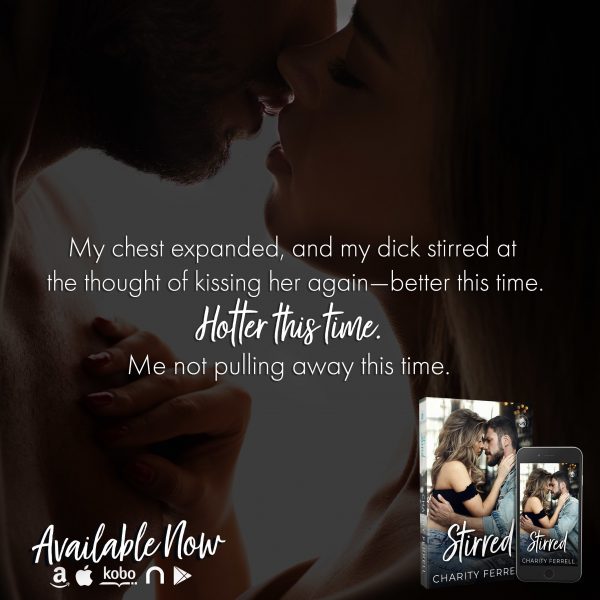 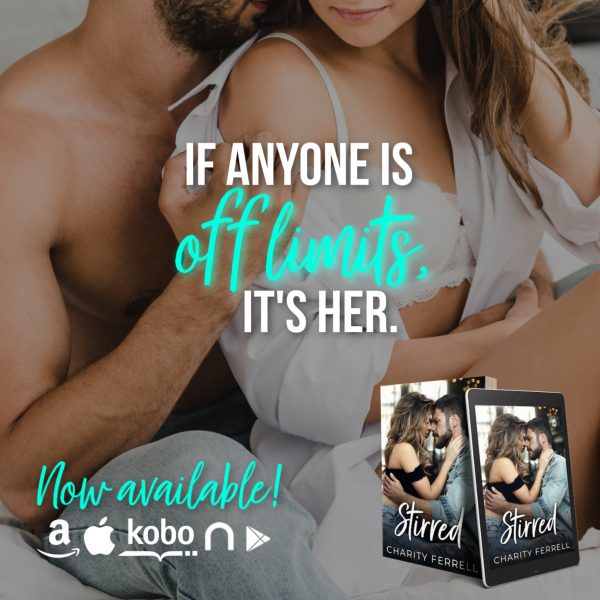 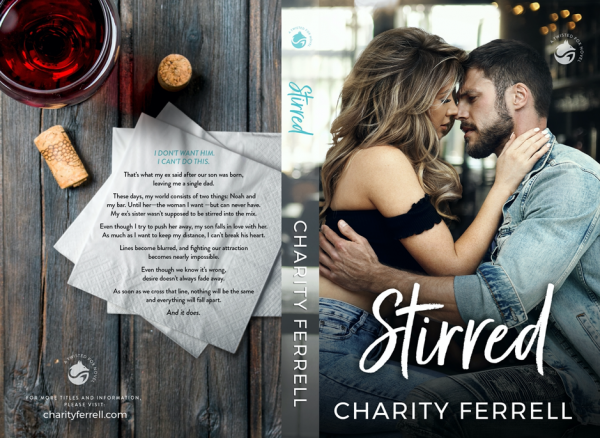 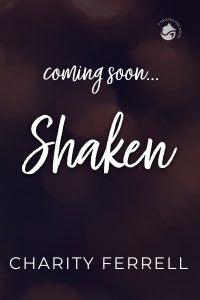 A new, enemies to lovers standalone in the Twisted Fox Series. 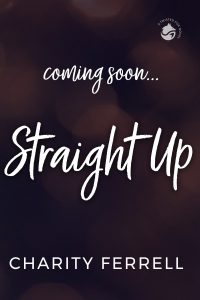 A new standalone in the Twisted Fox Series. 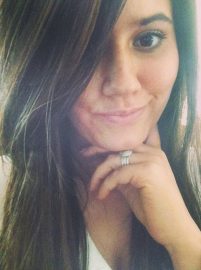 Charity Ferrell resides in Indianapolis, Indiana. She grew up riding her bicycle to the town’s public library, and reading anything she could get her hands on. When she’s not writing, she’s reading, spending time with her family, or caving in to her online shopping addiction, (mainly shoes and handbags). 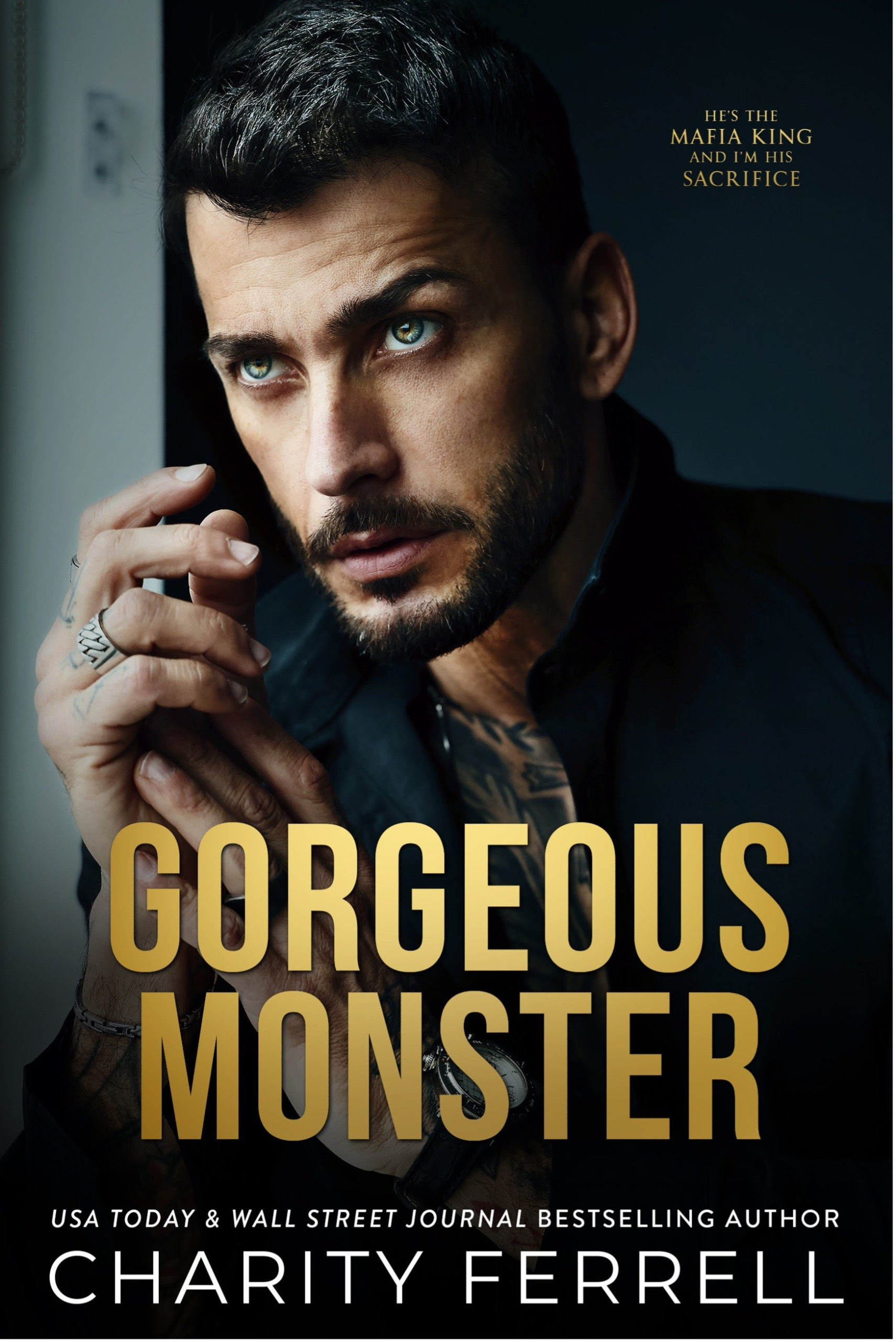