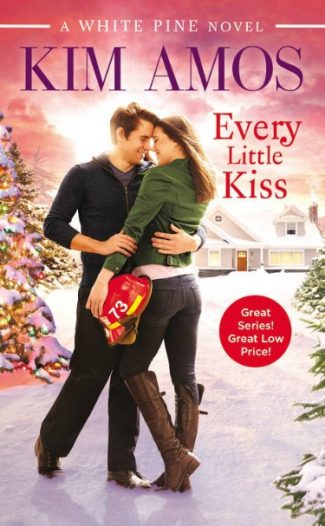 Turn on the charm.

Eternal good girl Casey Tanner moved to White Pine for a fresh start. Her mission: to finally have fun. And a fling with a reckless bad boy is the very first item on the to-do list she pretended not to make. After one long, lingering look at a sexy firefighter, Casey has found her man.

Getting women into his bed has never been a problem for Abe Cameron. Letting one into his heart is an entirely different matter. But just one kiss, just one touch, just one smile from beautiful Casey has this lifelong bachelor flirting with the idea of forever. And Casey's refusal to settle down only makes Abe more determined than ever to win her heart. Now the one woman who can't be caught is the only one Abe can't live without... 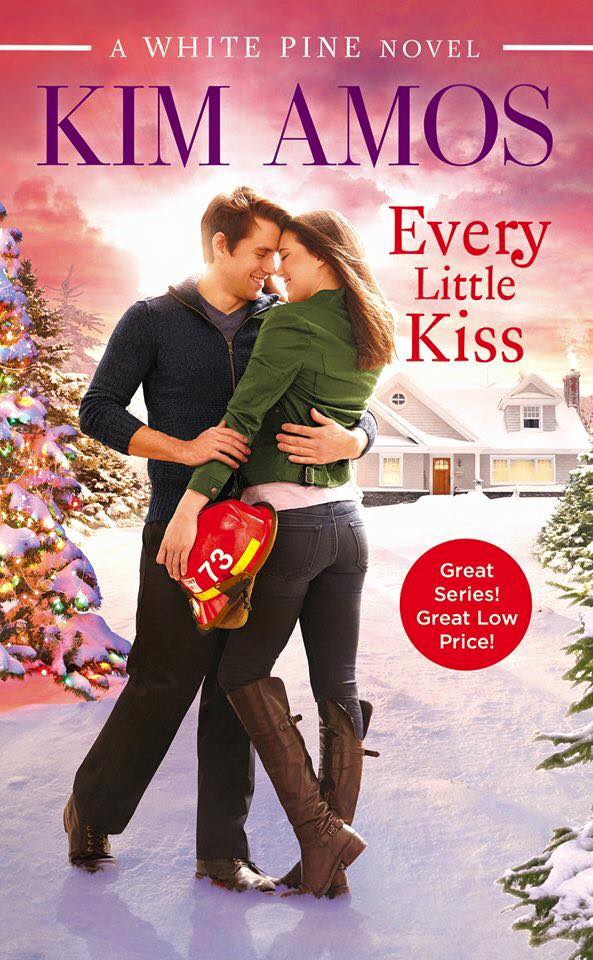 “Heard you had some excitement yesterday at your job,” Betty said to her, ladling her plate with food as the dishes were passed around. Betty’s curly blond hair was aglow in the soft light.

Casey silently gave herself props for following through earlier in the day on replacing the CO2 detector’s batteries, also buying two smoke alarms and a fire extinguisher.

“I meant the part where you got stuck in an elevator with a fireman,” Betty said.

The other women around the table stilled.

“You didn’t tell me that!” Audrey said, her brown eyes wide. “And you hate small spaces. Are you all right?”

“I’m fine. It was just an old elevator that stalled out.” She eyed Betty. “How did you even know about that?”

“Sometimes I tune into the scanner. Sounded like you and the lieutenant were in there for a good long while.”

“I—” Casey stalled, unsure what to say next. They’d been in there for what seemed like hours, even though it had probably only been twenty minutes or so. She could still feel the warmth of his hand around hers, the steady beat of his heart against her fingertips.

“The serious one,” Willa said. “Stu was so easy-going and fun. I was on student council with him in high school. Abe would pick him up from school sometimes, and I remember Abe being like—one of the faces on Mount Rushmore or something. So stony and serious.”

“The opposite of his parents,” Betty said.

“What do you mean?” Casey asked.

“Julia and Pete Cameron were such free spirits. They both painted, and I always loved their work. Now, they live up in the White Pine Retirement Village. I hear Pete’s memory is going.”

Until she remembered how warm and gentle Abe had been in the elevator. He’d been perfect, really, as she’d panicked in the cramped space. Until the light of day had shone on him again, and Casey figured she must have imagined the compassion he’d shown her.

Or had she? It was maddening to wonder what her addled brain had cooked up and what had been reality.

“What’s that look?” Audrey asked, reading Casey all too well. “Did something happen in that elevator?”

Leave it to her sibling to cut to the chase.

“The parade of ladies through his life is impressive,” Anna agreed. “Sam knows some of the guys down at the station and I guess he’s got quite a reputation.”

“Is that good or bad?” Casey asked.

“Very good while it lasts,” Betty said with a wink, “since apparently he’s quite… gifted in certain ways. But then bad when it’s over.”

“Didn’t he go out with Maddie Fronting?” Audrey asked. “I was in a book club with her once, and I feel like she was always talking about this guy who turned her into a gymnast in bed. Twisted her up in all the best ways.” She giggled. “That was Abe, right?”

“Probably,” Stephanie said, nodding. “He might put all that stony seriousness to good work in the bedroom, but at the end of the day, he’s an unreformed serial monogamist.”

“Someone who dates one person seriously for a while. Then breaks up with them and dates someone else—wash, rinse, repeat.”

“Did he ask you out?” Audrey asked Casey.

She shook her head. “No, nothing like that. In fact, just the reverse. Abe got me thinking that I should pursue the opposite of him. Someone lighter, more fun-loving.”

“Stu’s a charmer,” Betty said. “Works at that winter gear store, I think.”

“I didn’t mean Stu necessarily,” Casey said. “Just someone with similar attributes. Someone playful. Lively.” She bit her lip, unwilling to admit to her rule-bound past, which is why she was thinking about all of this to begin with.

Casey stared at her untouched casserole. The truth was, she had made some mental notes. Okay, more than a few. She had come to White Pine determined to open her heart to others, and there was a tiny ember inside her that was ready to kindle romance, too. Though, romance was too nice a word for what she really wanted, which was a tumble in the sack. She’d already begun thinking in earnest about a few ways she wanted to jettison her…inhibitions.

“Oh, you didn’t!” Audrey laughed, staring at her. “You actually made a bullet-pointed list, didn’t you!” Once again, leave it to Audrey to bare her secrets.

“Not exactly,” she said, “I haven’t put pen to paper, it’s more like I’m thinking about what could be on it.”

“It’s not a list, I haven’t written it down,” Casey protested.

“It’s in your head though,” Audrey said, grinning.

“We don’t mean to poke fun,” Stephanie said, perhaps catching the frown pulling at the corner of Casey’s mouth. “We’ve just been around each other so long, we’ve lost some of our verbal filters.”

Another reminder Casey was the outsider. She set down her fork, no longer hungry.

Audrey bumped her shoulder playfully. “Come on. You have to admit, it is kind of ironic. An serious list so you can have some fun?”

It wasn’t serious, though. It wasn’t even a list. More like it was a mortifying set of thoughts about wanting to get some. Casey knew she should probably be talking about finding Mr. Right, just like all these other women had. But the truth was, she didn’t want that. After a lifetime of rule-following not to mention a serious relationship with even unhappier ending, she wanted something she’d never had before, and it sounded an awful lot like hot sex, no strings attached. Forget a ring. She wanted a fling.

A Kiss to Build a Dream On 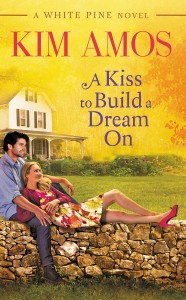 If pride goes before a fall, Willa Masterson’s trip back to White Pine, Minnesota, should be one heck of a tumble The girl who left her hometown-and her first love, Burk Olmstead-in the rearview twelve years ago was spoiled and headstrong. But the woman who returns is determined to rebuild: first her family house; then her relationships with everyone in town . . . starting with a certain tall, dark, and sexy contractor.

Burk has no reason to believe Willa has changed, and every reason to discourage her from converting the Masterson house into a B&B. He has plans of his own for that house, and they certainly don’t include a no-vacancy sign. But Burk didn’t count on how distracting Willa’s bright green eyes or her all-too-familiar touch would feel-or how impossible she will be to resist…

And Then He Kissed Me 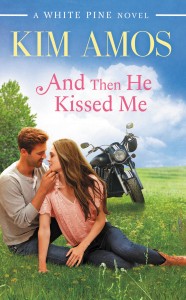 Five years ago, Audrey Tanner flung caution to the wind and herself into the arms of an emerald-eyed bad boy biker she met at the White Pine Asparagus Festival. Two blissful weeks together convinced her that Kieran Callaghan was The One-until The One blew town without a word, leaving her brokenhearted. Now, starting a new job at the new Harley Davidson showroom, Audrey is floored to meet her new boss: Kieran. He’s still hot as hell, but she won’t fall for his sexy smile again. This time, she’s calling the shots.

…or playing for keeps?

Kieran never thought he’d return to White Pine, Minnesota, much less see Audrey again. Gorgeous and smart as ever, she’s just as irresistible as he remembered. She still doesn’t know why he had to leave-or that he’s missed her every day since. But he can’t deny he wants more than the no-strings fling Audrey proposes. As things between them heat up, Kieran must choose between the secret he’s sworn to keep and the woman he never stopped loving… 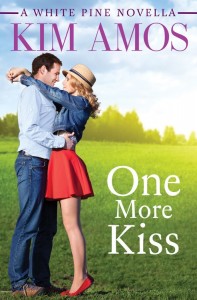 One more kiss…
Betty Lindholm doesn’t know whether to laugh or cry. The banner advertising the new shipment of satin at her fabric store finally arrived and now the entire town of White Pine is up in arms. How was she supposed to know there’d be a typo? Now the entire town thinks she’s proclaiming “Satan is here!” Even the gorgeous pastor with his steel-grey eyes and sexy smile . . .

…is never enough.
Pastor Randall Sondheim is always on the lookout for excuses to drop by Betty’s shop and gaze into her lovely blue eyes. The latest is her crazy sign-could that be a sign of something more? Sweet Betty brings out the best in him but it’s the worst in him, his dark secret tragedy, that worries Randall. Can this man of God conquer his own demons to win a match made in heaven?

Kim Amos is a romance writer whose Midwestern roots run deep. You can usually find her hanging out in a state that borders the Great Lakes. She is married to an artisan ice cream maker, which is a dangerous complement to her enduring love for cheese.