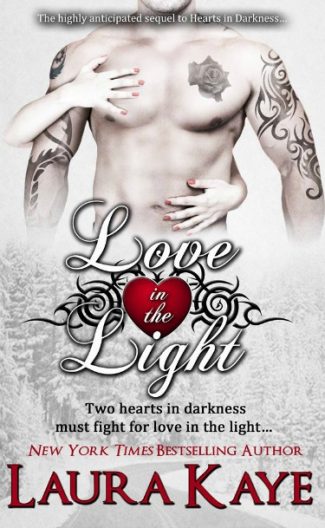 Two hearts in the darkness…

Makenna James and Caden Grayson have been inseparable since the day they were trapped in a pitch-black elevator and found acceptance and love in the arms of a stranger. Makenna hopes that night put them on the path to forever—which can’t happen until she introduces her tattooed, pierced, and scarred boyfriend to her father and three over-protective brothers.

Must fight for love in the light…

Haunted by a childhood tragedy and the loss of his family, Caden never thought he’d find the love he shares with Makenna. But the deeper he falls, the more he fears the devastation sure to come if he ever lost her, too. When meeting her family doesn’t go smoothly, Caden questions whether Makenna deserves someone better, stronger, and just more…normal. Maybe they’re just too different—and he’s far too damaged—after all… 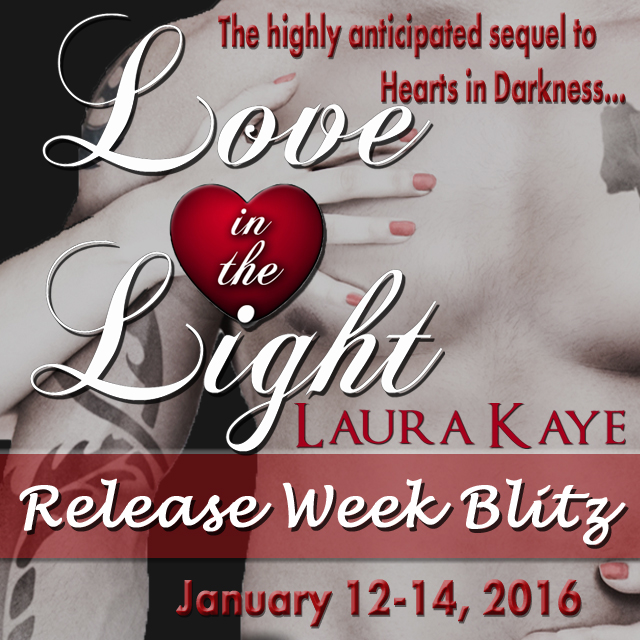 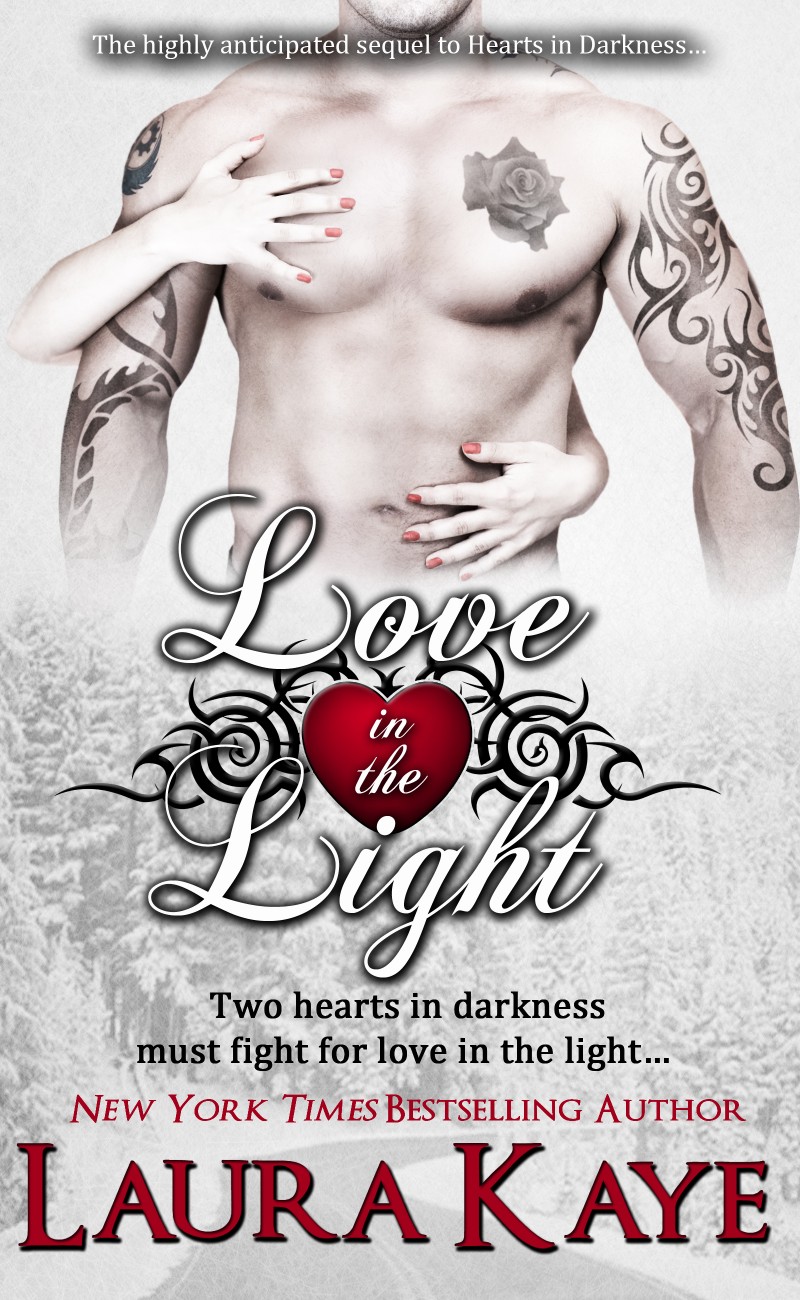 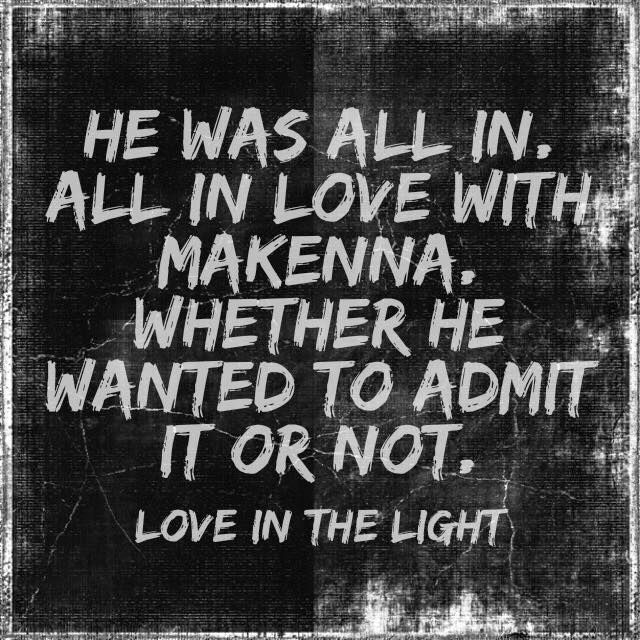 “You should get undressed, too,” Makenna said, coming to him and starting on the buttons of his shirt.

She gave a little moan and kissed the center of his chest. “Just like unwrapping a present.” She trailed a line of kisses and licks from one nipple to the other.

“Fuck, Makenna,” he whispered. “What are you doing?”

“Tasting you,” she said.

The words were like a blowtorch to his blood. He was hard in an instant. “We can’t,” he said, though his hands went to the back of her head, encouraging her, guiding her as she continued to kiss and tease and drive him wild with her mouth. 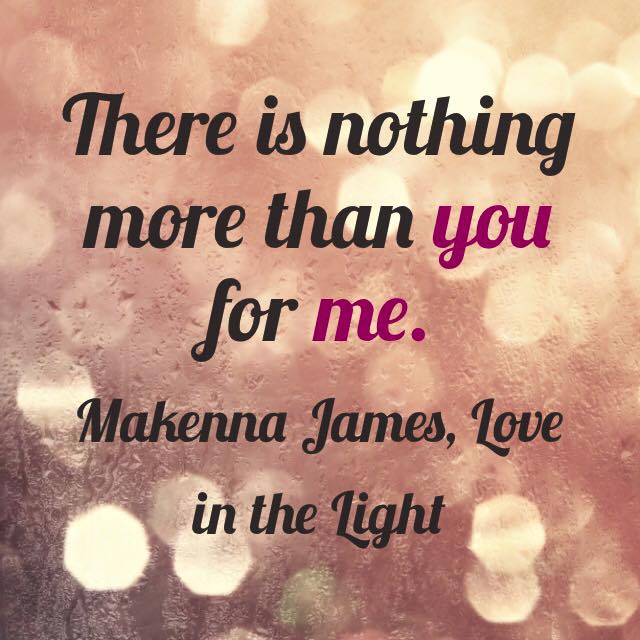 Whew folks…I feel like I’ve been put through the ringer, and the funny thing is I’ve never felt better. I love when you don’t just read a book, you experience it. You are transported to their world and journey right alongside the characters. I didn’t realize until I’d finished just how invested I was in Caden and Makenna, and just how much I would feel the loss of them once the story was over. This was a journey I began three years ago and until very recently, didn’t realize it was going to continue. Hearts in Darkness was one of the first indie books I ever read, and even though it was only a novella, it was far and above one of the best stories I had ever read! What this author managed to pull out of 112 pages was beyond belief. The whole story takes place in the span of about 12 hours, but you feel as if you’ve been with them for a lifetime. It’s short, it’s sweet, it’s steamy, and it’s emotional. But it did nothing to prepare me for the myriad of feelings I was about to experience when their story continued…

We pick up about two months after the first book ended, and our couple is happy in serious like. Well, really love, but neither is brave enough to say it yet, though they both clearly feel it. When you know you know, and let’s be honest here, we knew the first time we met them. Now we just have to wait for them to come to this conclusion. Normal couply things are going on and everything seems too perfect to believe. It’s the happily ever after we all dream for, right? I won’t say what ensues, but let’s just say that Caden’s demons come back with a vengeance and that becomes what the rest of their story is about. I really appreciated that throughout the story, there were no games or misconceptions. I loved the truth and honesty that always fell from Mackenna’s lips. She was so straight forward and matter of fact with Caden and it was exactly what he needed in his life. This is the point where I really get emotional. While I love Makenna, Caden was the heart and soul of this story and I can’t begin to count how many times my heart broke as the pages were turned. This is one of the most devastating subjects to read about because there is no fault or blame to place anywhere. You can’t battle a voice inside someone’s head when they are speaking louder than you. All you can do is decide if they are worth it and just be there when they come out of the other side. You hold on tight to the love you share, you remember why you love them in the first place, and you ride out the storm. Depression is an ugly beast and is isn’t a monster you can very often see. But he’s always there, lurking in the shadows, just waiting to get your attention.

Even when he was at his lowest, oh how I admired Caden’s strength. I feel like we pulled each other into the light. Speaking of which… this book is SO aptly titled. It’s easy to stay in the light, but you have to fight and crawl your way towards there first. Darkness pulled our characters under, but love, forgiveness, and acceptance pulled them out. For such a difficult subject matter, Kaye handled it with perfection. She didn’t sugarcoat anything and for the first time in a book, I actually felt like I really understood when people suffering from it go through. There was a rawness and maturity that you don’t often find in books. It wasn’t just glazed over, but rather we were tossed into the deep end of the pool with no life preserver. I felt like this was necessary to the integrity of the characters and it only led to the story being that much more realistic. I truly wish I had one of those wands from MiB so I could zap myself, forget these books, then read them again for the first time over and over. There is pure magic in these pages people, I can promise you that. You’ll feel it in your gut the entire time and when you finish your heart will be close to capacity. Don’t take my word for it though; check it out for yourself! This is one phenomenal heartbreaking beautiful story that is NOT to be missed! 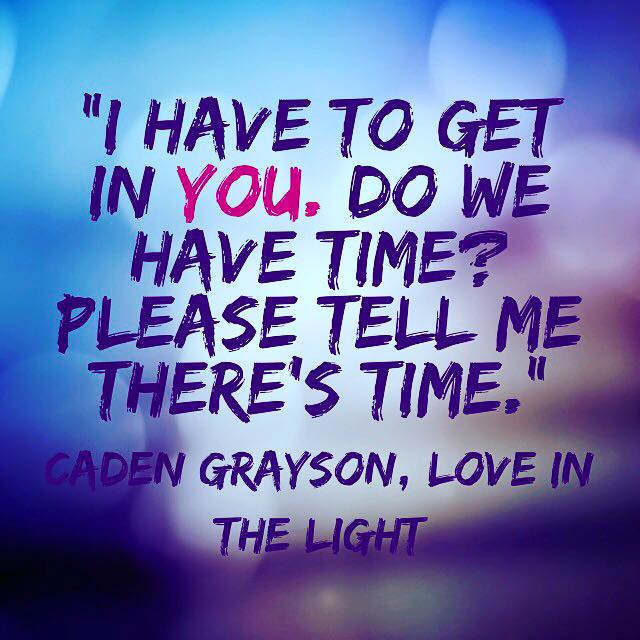 “So Caden said you two met in an elevator,” the tattoo artist said to Makenna, amusement plain in his voice.

“We really did. We were trapped in it for over four hours,” Makenna said, smiling. It was a little weird to talk to someone she couldn’t look at, but she couldn’t move while he was working. “In my office building. I rode it just today.”

“That’s quite a way to meet someone,” Heath said with a chuckle. “How come nothing like that ever happens to me?”

The tattoo machine pulled away from her skin. Heath laughed. “I guess I don’t,” he finally said, leaning back in.

The needles hit a sensitive spot along her spine that had Makenna grimacing. Originally, she’d been thinking of putting the piece on her shoulder, but when she’d decided on the bigger size, she thought it would look better in the center. Heath had warned her that the central placement meant inking over bone, which could hurt more, and it sure did.

Caden braced his elbows on his knees so he could lean closer. “Want to play twenty questions?” he asked.

She smiled, knowing he was trying to distract her and appreciating the heck out of the gesture. “Are there still questions left we haven’t asked each other?”

“Probably,” he said. “For example, I don’t think I’ve ever asked you your favorite sex position.”

“No laughing,” Heath said, as Makenna tried to hold back her humor. Heat filled her cheeks. “Also, TMI. However, I like TMI, so feel free to answer, Makenna.”

Since the needle was away from her skin, she did laugh that time. “Okay, so maybe there are questions we haven’t asked.” She winked at Caden as Heath got back to work. “And, to answer the question, the second part of the night on my floor.”

Caden’s gaze went molten. He flicked at the spider bite piercings with his tongue. And that had parts of her going molten, because she knew how freaking talented that tongue was.

“Yours?” she asked, arching an eyebrow. 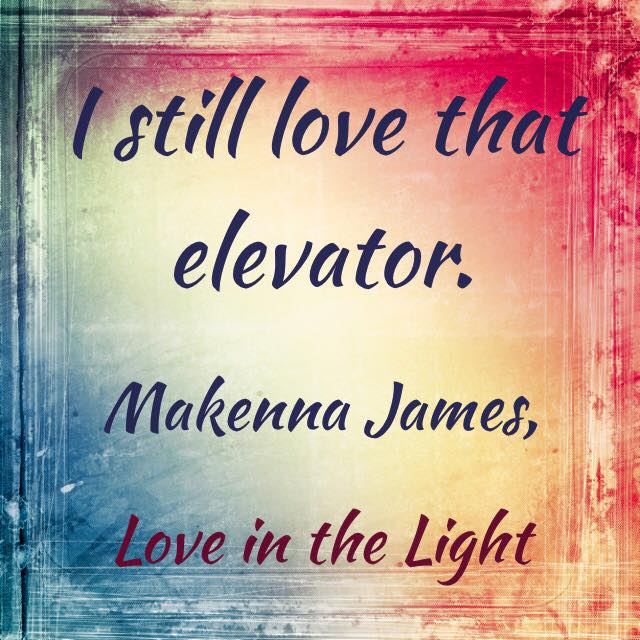 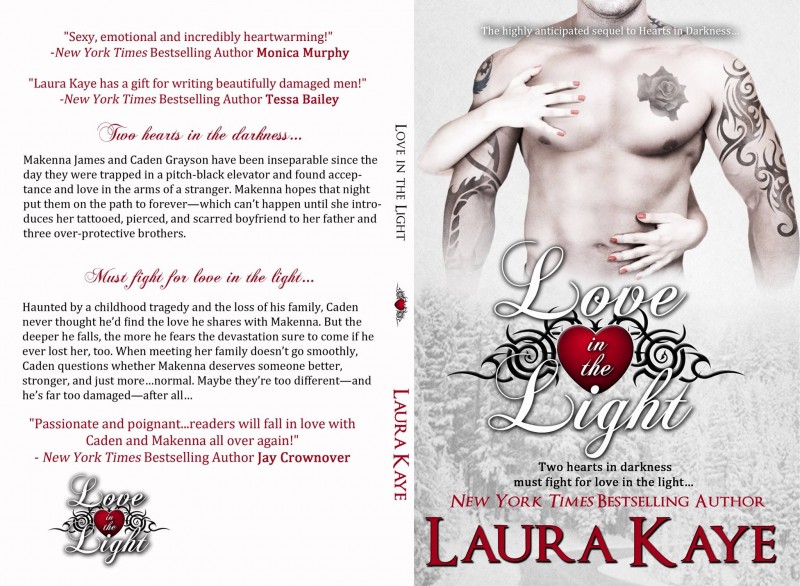 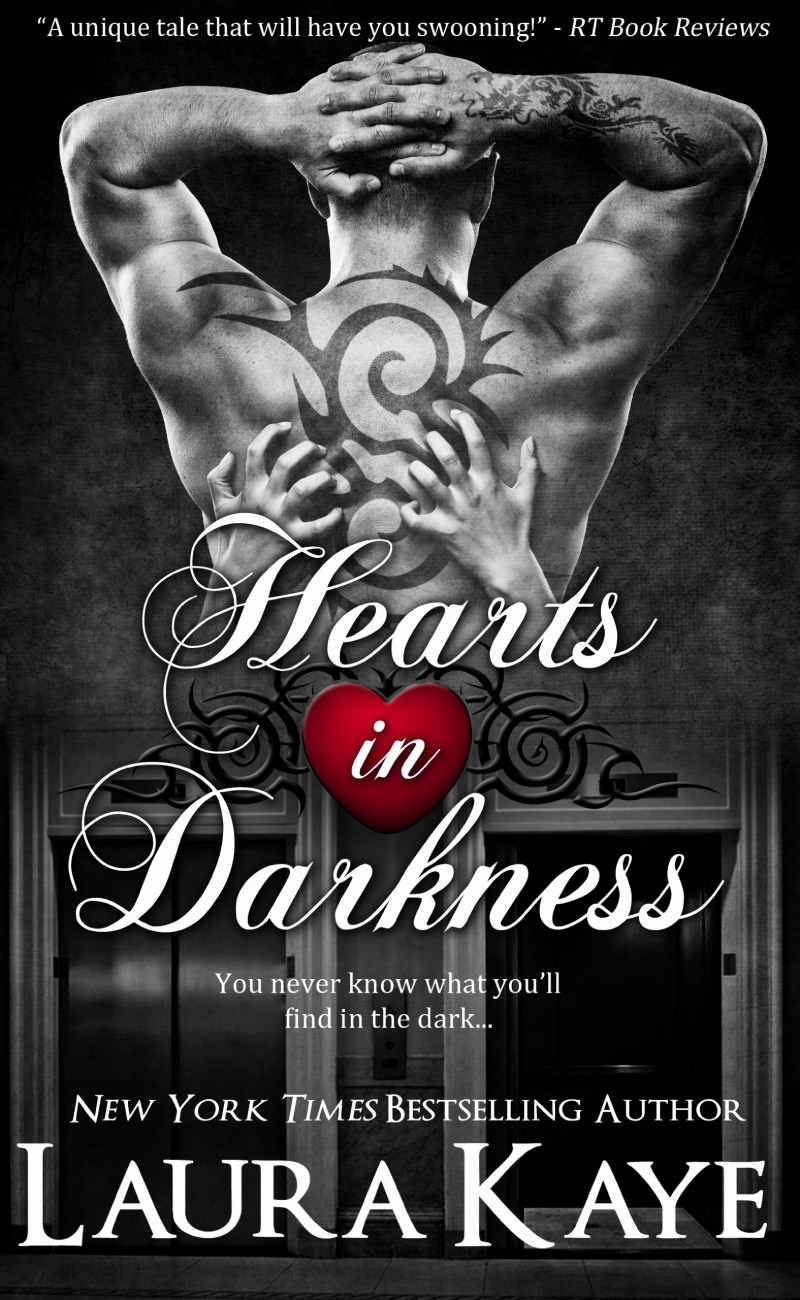 Makenna James thinks her day can’t get any worse, until she finds herself stranded in a pitch-black elevator with a complete stranger. Distracted by a phone call, the pin-striped accountant catches only a glimpse of a dragon tattoo on his hand before the lights go out.

Caden Grayson is amused when a harried redhead dashes into his elevator fumbling her bags and cell phone. His amusement turns to panic when the power fails. Despite his piercings, tats, and vicious scar, he’s terrified of the dark and confined spaces. Now, he’s trapped in his own worst nightmare.

To fight fear, they must reach out and open up. With no preconceived notions based on looks to hold them back, they discover just how much they have in common. In the warming darkness, attraction grows and sparks fly, but will they feel the same when the lights come back on? 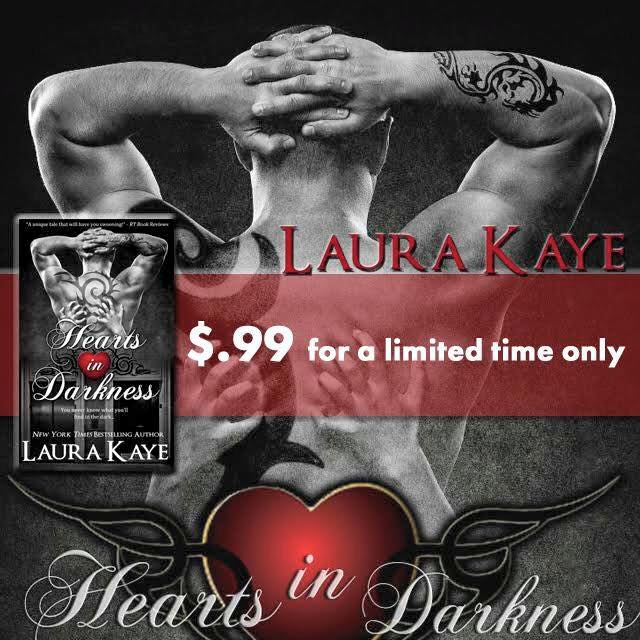