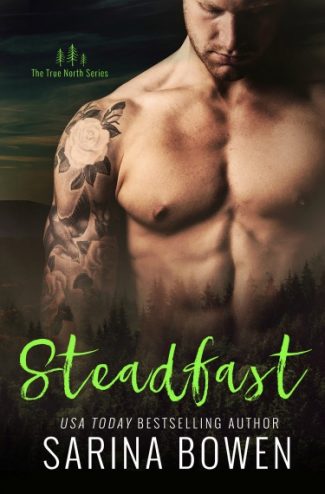 Jude lost everything one spring day when he crashed his car into an apple tree on the side of the road. A man is dead, and there's no way he can ever right that wrong. He’d steer clear of Colebury, Vermont forever if he could. But an ex-con in recovery for his drug addiction can’t find a job just anywhere.

No one wants to see Sophie and Jude back together, least of all Sophie's police chief father. But it's a small town. And forbidden love is a law unto itself. 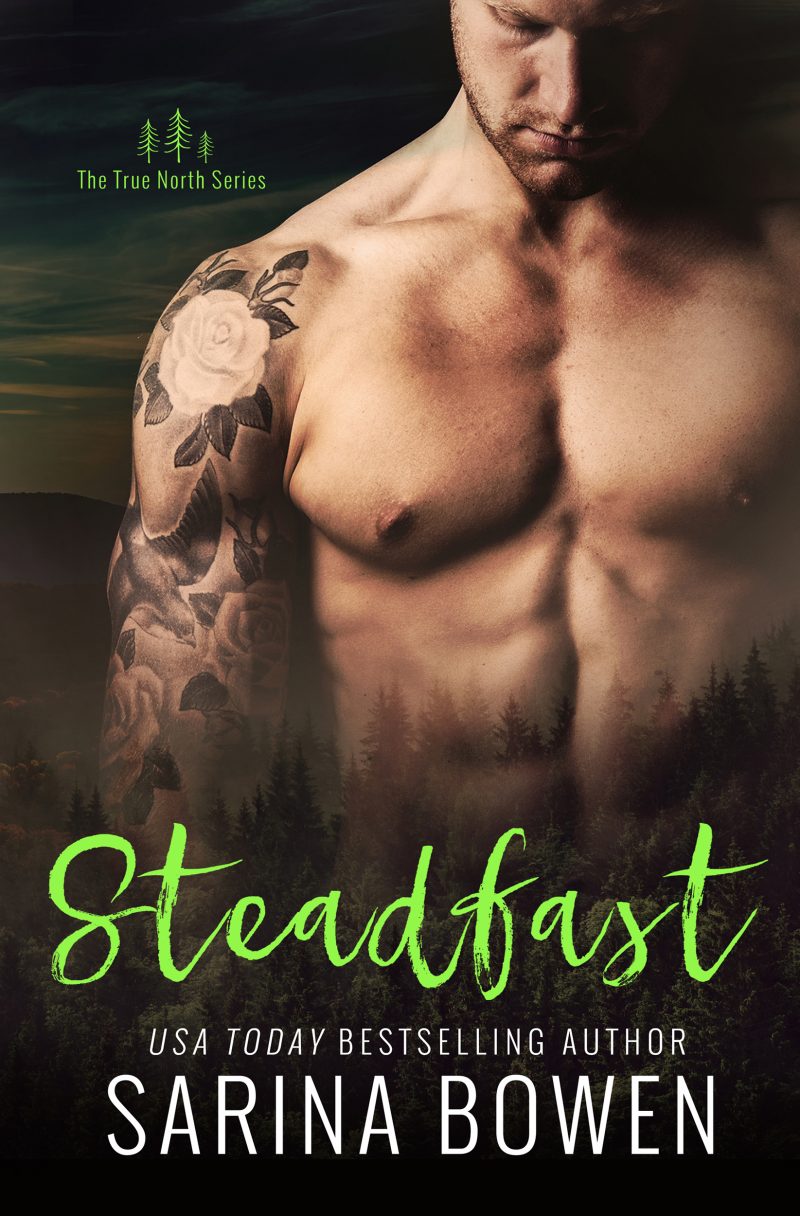 I’m crazy about this series. In love with Jude and Sophie, the Shipley’s, just the whole family dynamic. EVERYTHING IS WOW.

5-stars, Top Pick! This story will break your heart and stitch it back together again.

Utterly fantastic. Well-written romance that runs the full gamut of emotions. Oh, and did I mention steamy? This series has it all.

The amount of depth and emotion that flies off of every single page is absolutely astounding!

The true definition of a feel good read, it completely consumed me from the first page!

Steadfast has everything you want in a second chance romance and I guarantee it will be in your Best Of 2016 list.

This book slayed me. I was up until 3am finishing it!

Sarina Bowen has topped herself again. I couldn’t put down Steadfast!

A dark and heart rending story. I was inspired to think more about giving people second chances and the benefit of the doubt. Also? It’s really, really sexy.

-Tiff at Mostly YA Lit 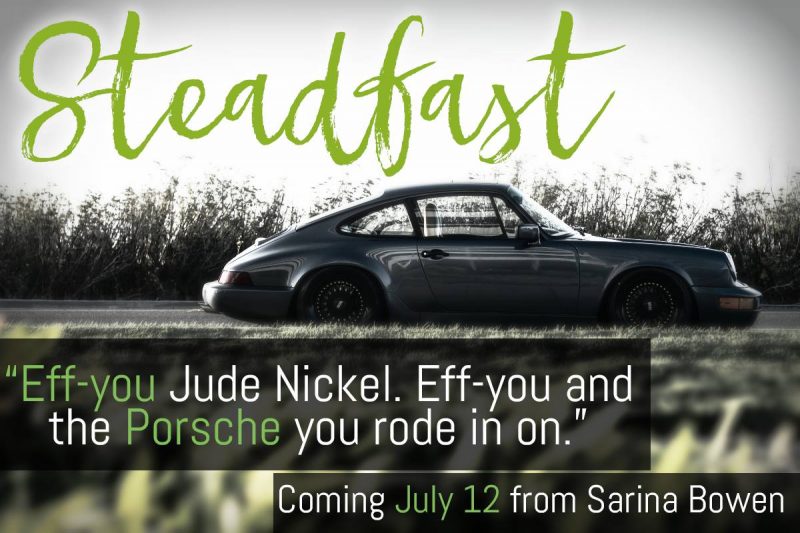 I jumped off the bed and pulled open the door. And there she stood in the dark, arms crossed, looking up at me with big, angry eyes.
“Hi?” I said, confused.
Before I knew what was happening, she stepped over the threshold. Sophie kicked the door shut and then leaned against it. “Are you staying in Colebury?” she demanded. “I have to know.”
“Uh.” Shit. “I don’t have much choice. No other garage will hire me.”

My brain was playing catch-up. But my body was clueing in to the fact that Sophie and I were barely two feet apart and standing within spitting distance of the bed where we’d had more sex than sleep. Her chest rose and fell with quick breaths, and her cheeks were flushed.

Wait—one cheek was redder than the other. Was that a handprint? I pushed the hair away from her face for a closer look.
“What the fuck?” I whispered. “Who did that?”

“Who do you think?”
Her words were like little chips of ice.
Jesus. “Your father?”
With a gentle thumb, I traced the outline of what must have been a horrible slap.
“Did you tell him you were with…?”

“No! I’m not an idiot.”
She grabbed my wrist and flung my hand away from her face. Then she grabbed my flannel shirt in two hands and looked up into my eyes.

Her gaze was fiery and fierce.
“Can you be the one person who doesn’t make me feel stupid today?”

Time paused like a held breath as Sophie’s hands pressed against my body, their warmth searing my pecs. We stared at each other while confusion rippled through me. And then everything got even more complicated. Sophie rose to her toes and yanked me into a kiss.

I’d never been so stunned. The feel of her soft mouth on mine was so unexpected and yet so familiar it was too much to bear. As our lips did a slow slide together, my breath hitched. But I couldn’t pull back. One more taste, my asshole brain suggested. Bracing both of my palms against the door, I leaned into her sweet mouth.

She opened for me immediately. When our tongues touched, I had the sensation of falling or running too fast downhill. She tasted like Sophie. She tasted like the best thing that had ever happened to me.

Warm hands curled around my biceps. When I nipped her lip, she whimpered, and my dick perked up like a lonely stray who suddenly smelled a feast. I thrust my tongue against hers, and she moaned into my mouth. Her hands went to the buttons on my shirt.

That’s when I remembered who I was, and just how bad an idea this was.

Although it hurt me, I dragged my mouth off Sophie’s. 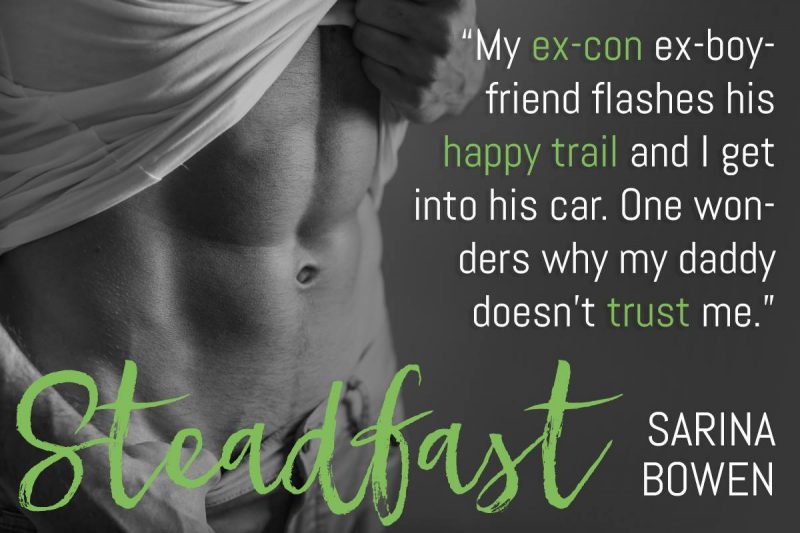 My love affair with this writer’s books, though new, wasn’t completely unexpected. I’d heard nothing but good things, but TBR lists are endless and there’s never enough hours in the day. Well, when I heard she had books coming out with bearded bad boys who worked on a farm, I couldn’t get those beauties in my hands fast enough! Fell completely head over heels in love with Griffin and Audrey and all the secondary characters. But I because increasingly intrigued by Jude and Zach. Zach’s story is next, but now it was all about Jude and Sophie and the circumstances that found their love ending way too soon.

I was blown away with how realistic this story was told. Even though I personally have never done anything harder than an occasional (very occasional) joint, it was impossible not to empathize with Jude and his inner demons. The rawness in which his emotions and cravings were portrayed darn near brought me to my knees. It was almost like there were three main characters in this book; Jude, Sophie, and Jude’s drug addiction/recovery. Even though there was a constant battle between the three, it was the scenes between Sophie and Jude that really stole my heart. Their basic human need for each other was heartbreaking the more Sophie fought it and the more self-deprecating Jude was. These two were magnets fighting a never-ending battle to stay away from each other, but like the magnets they were, couldn’t stay far for long. It was in these quiet moments of true desperation that we really became privy to their characters. The selflessness of their love for one another; their ability to forgive and move forward. The road wasn’t easy and was most certainly paved with land mines, but the harder they fought, the more I held out hope.

There were definitely some twists and turns in this book, but not enough that I didn’t suspect they were coming. Well, maybe I held out hope for them coming true was more like it. There are always little clues, breadcrumbs if you will, and you’re left hoping upon hopes that what you believe will eventually come to fruition. I loved that we got more of the Shipleys. I fell in love with that family in the last book and I can only imagine we’ll get even more of them with Zach’s upcoming story. At this point, I’m ready to pack it all in and move to Vermont to live in the bunkhouse. Apple picking anyone? 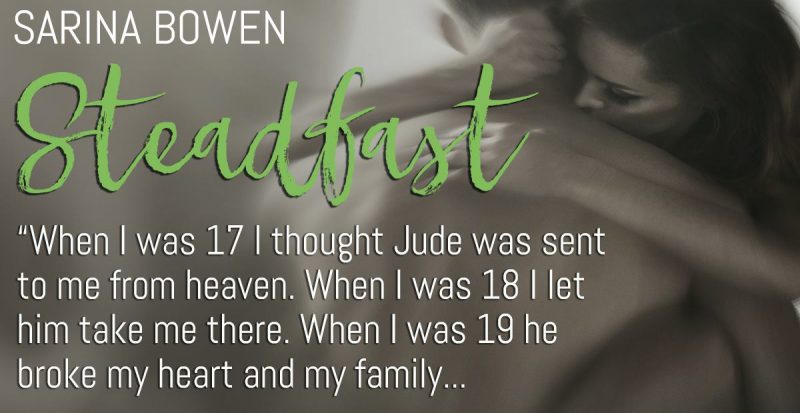 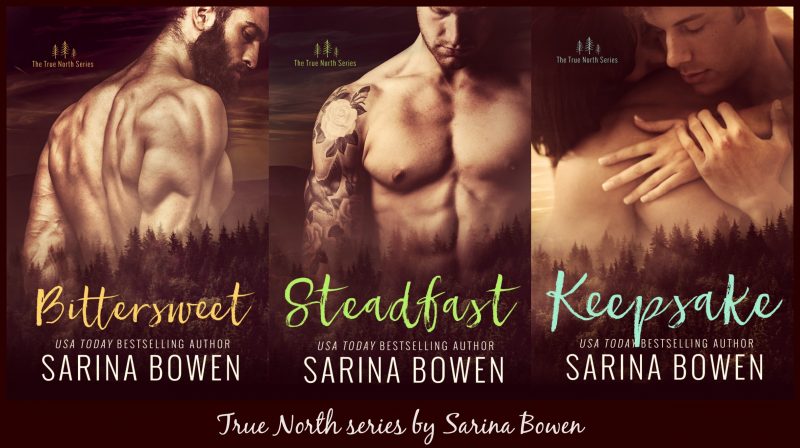 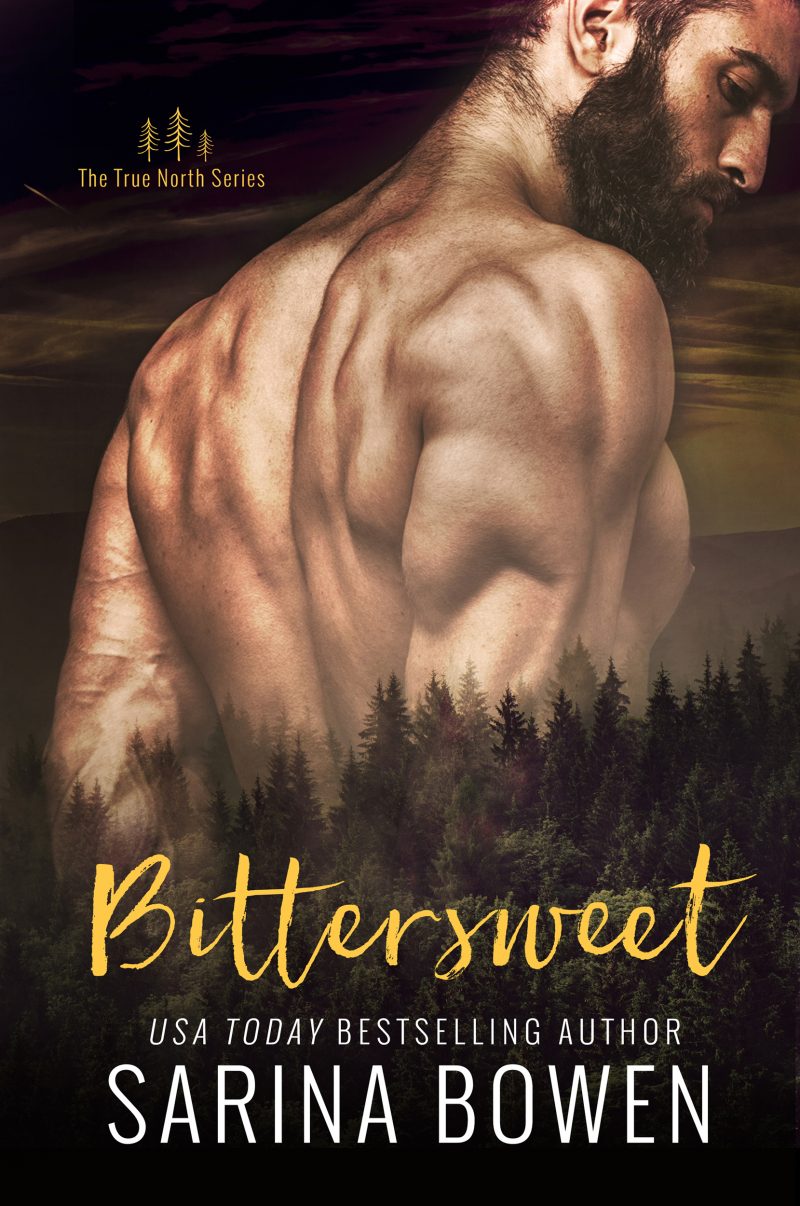 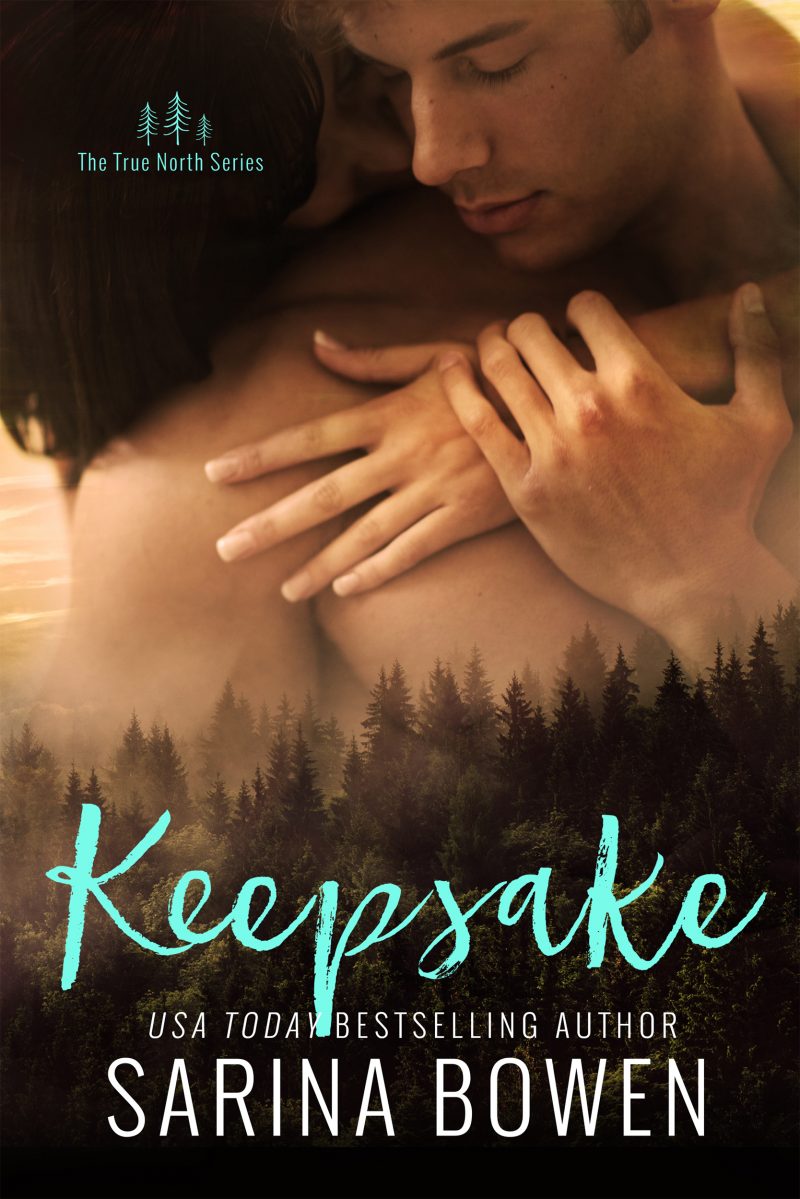 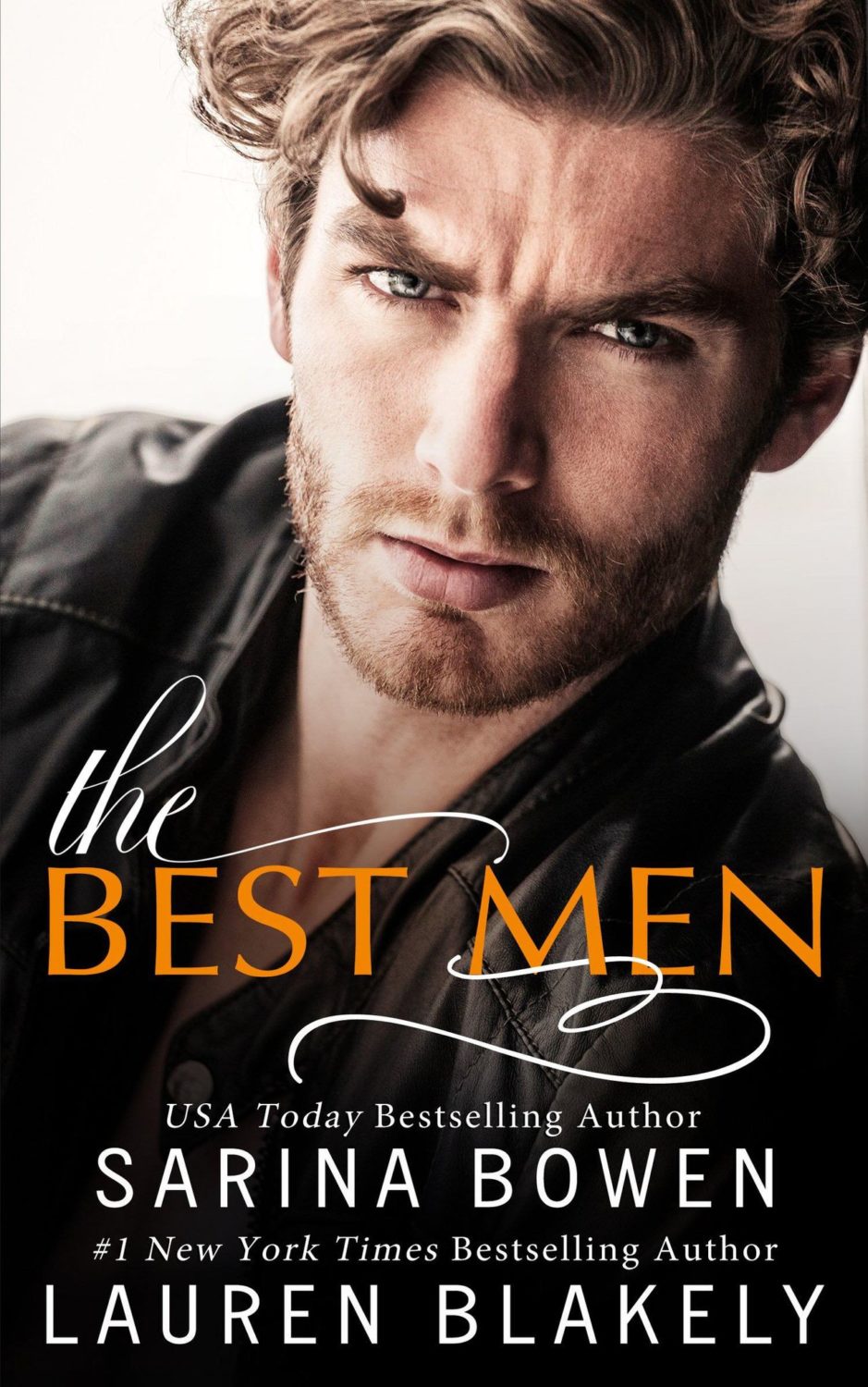