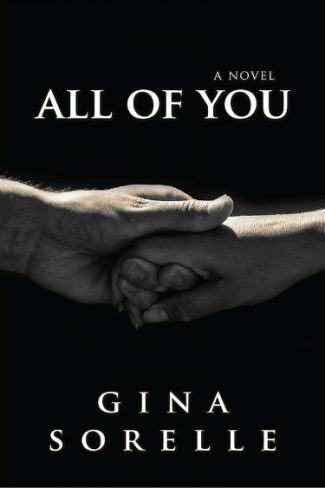 Brilliant geneticist Kat Ciaramitaro is, and always has been, a bit of a nerd. She’s also the only level-headed member of a big Italian family where crazy reigns supreme. A life-altering medical diagnosis seven years ago changed a lot of things, but most days, Kat handles the emotional and physical baggage just fine. Because that’s what strong women do, right? They stand and they deal. Or, if they can’t stand, they sit and they deal. Cleveland Police Officer Danny MacDonough is broken. Eighteen years of being passed from foster home to foster home left him feeling unwanted and totally unlovable, but Danny’s spent every moment since his eighteenth birthday making up for lost time, grabbing happiness wherever he can, with whomever he can, however he can…all while making sure no one gets close enough to see all the cracks in his well-honed façade. When Kat’s sister married Danny’s best friend, their lives became forever intertwined. Despite their different backgrounds and polar opposite personalities, Danny and Kat formed a visceral connection the moment they met. They fought it with all they had, but one fateful night changes everything – thrusting them into an all-consuming, passionate relationship that threatens to tear down the walls they’ve so carefully constructed around their hearts. But Kat is ill and Danny is wounded. And nothing about what’s developed between them is easy or neat. Their love is messy and chaotic and its intensity ultimately forces them into one final showdown where Danny and Kat must decide once and for all what will win– His past, her future or their love? 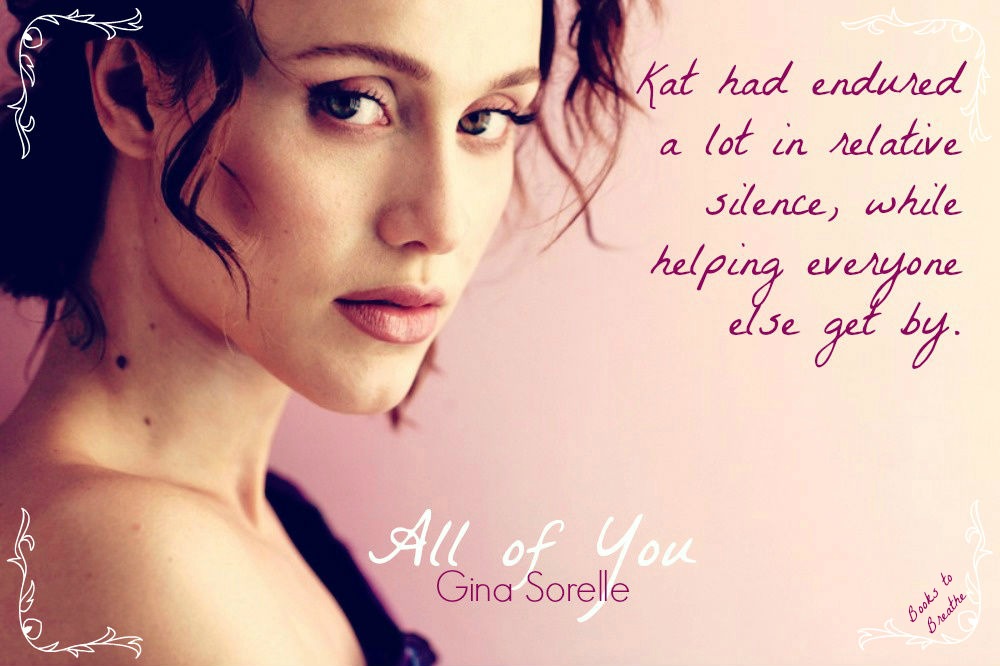 Like is such a meaningless, trivial word that in no way adequately describes how I feel about this book. Emotionally gutted, lovingly sated, heart bursting with a myriad of emotions; I thought I was ripped with Nathan and Stella, but boy, was I ever jaded. This is a whole on a whole other level. Books like this are what all authors should strive towards. Real life, real people, well thought out emotions and timelines. Multi-dimensional characters who fight and love with all their strength. Families who are always there unconditionally. And do I ever love broken characters and angst, because the end result is ALWAYS worth it! I was recently introduced to this author’s books, and how everyone is not screaming about them from the rooftops is beyond me! They encompass every imperfect and perfect thing I love about reading. Her stories take me from the highest highs to the lowest lows and back and forth in between. I wouldn’t miss a minute, though, for I enjoy every single emotion equally.

“I don’t know why, but I don’t want to leave you, Danny,” she whispered against his skin. And then she held him. It was the most intimate, heartbreaking, beautiful moment of his life.

We first met Danny and Kat in All of Me. Danny is Nathan’s best friend and partner on the police force, and Kat is Stella’s sister. Danny comes from a childhood filled with nothing but abuse and neglect, and now fills his days and mind with alcohol and mindless sex. There was something so primal about my need to just wrap this man in my arms. He had almost a childlike quality when it came to love. He wanted to love so fiercely but had been scorned by it at every turn and taught that it was a flightless fantasy. Danny put his walls up and guaranteed that no one would ever penetrate them. Sorelle’s treats us to double POV’s in this book, so we are privy to the constant musings and self-doubts plaguing Danny’s mind. Just when he would get close to opening up or something good would happen, he would instantly shut down and put on a happy or defensive face. Much like a feral cat, he really just needed to be shown unconditional love. I’m not lying when I say he took me to the lowest lows that a book has ever taken me before. Maybe because I knew what was running through his mind, or maybe because I could see what he couldn’t, but either way, the pain was there for all parties involved. When he finally opens his heart fully though, watch out. Tears of joy sprung uncontrollably, no end in sight. This was truly such a beautiful character, inside and out, and his dirty mouth was just the icing on the cake.

I want to be inside of you.

I want to own you.

I want you to own me.

Kat was one kick ass chick; well-educated, deliciously nerdy, self-sacrificing to a fault, she never put herself first. Kat has a debilitating disease, multiple sclerosis (MS), and even though it was currently benign, she still had difficulties. Physically she wouldn’t let anything or anyone hold her back, but emotionally, she was almost as damaged as Danny. As we were able to view into her mind as well, I was able to connect on a deeper level. I recognized wanting everyone around you to be happy and fulfilled, even if it’s at a detriment to yourself. Inside and out, despite what her body attempted to force upon her, she was a strong woman who had so much love to give. Unsure about her future, though, she wasn’t willing to take that risk. Listening to her deny herself the happiness she so rightly deserved all based on what-ifs was utterly heartbreaking. Like Danny, she had so much love to give. Kat was unlike any other leading female I’ve ever read. She had a vulnerable strength that was awe-inspiring; a quiet nature that packed a punch.

I fucking love you, Kat. No, scratch that…I don’t just love you; I am so in love with you I can hardly breathe.

These characters were truly made for each other, no matter how hard they tried to deny it. And deny they did. That made the book even more scrumptious to me; the slow burn. Because when they collided and were forced to lower walls, the passion was off the charts. Here were two people who so needed the love the other could give; at times I just wanted to scream at them. Seeing into both of their minds, we know how early the feelings developed, but it took time for them to admit it to themselves and each other. Being a fly on the wall of this book was truly a treat. When they fought, they fought dirty. But when they finally cut the crap, well, there was no denying the chemistry. I’m not sure that I’ve ever read two characters MORE suited for each other.

Kat had endured a lot in relative silence, while helping everyone else get by.

I loved that we were more involved in the family dynamic. I felt like I got to know all the sisters on a much deeper level than I did the first book, and now I cannot wait to see who we get to read about next! Gina’s writing pulls you into this world and you never want to leave. These are both books that I will most definitely be coming back to read over and over again. I cannot recommend them enough 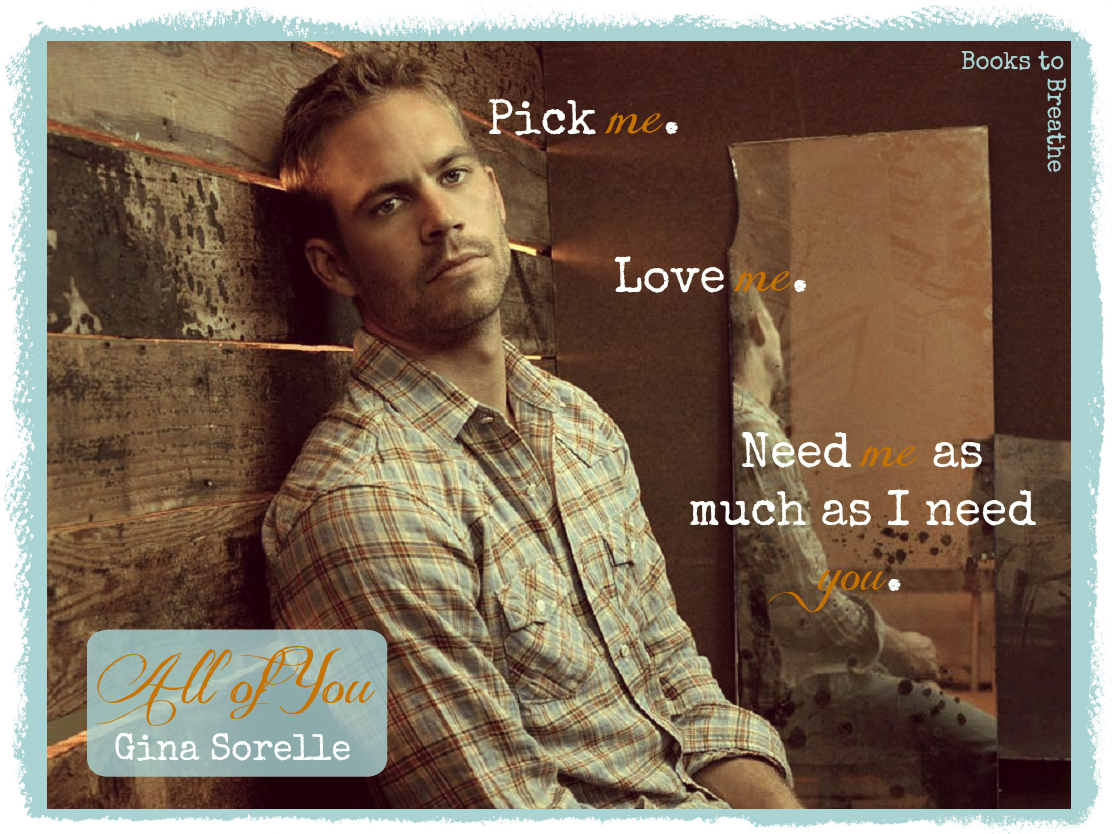 From Danny to Kat 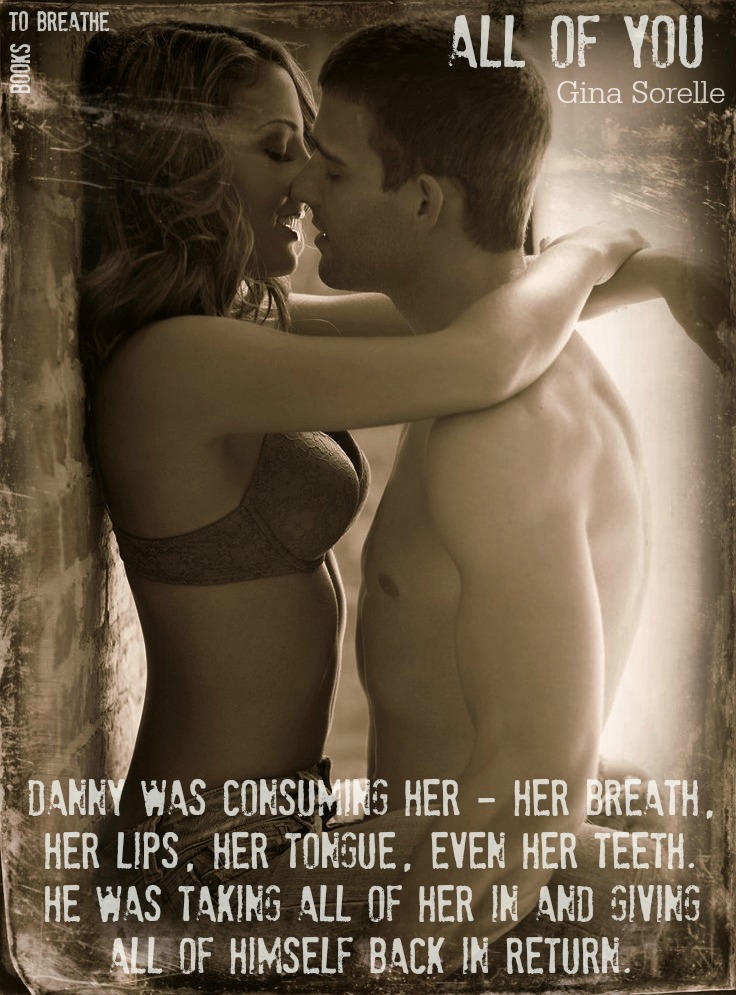 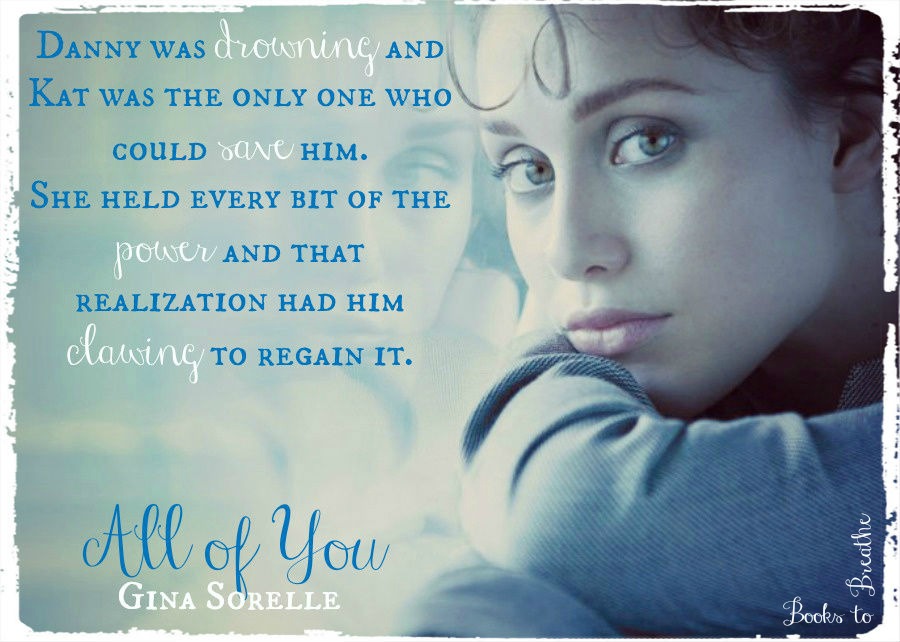 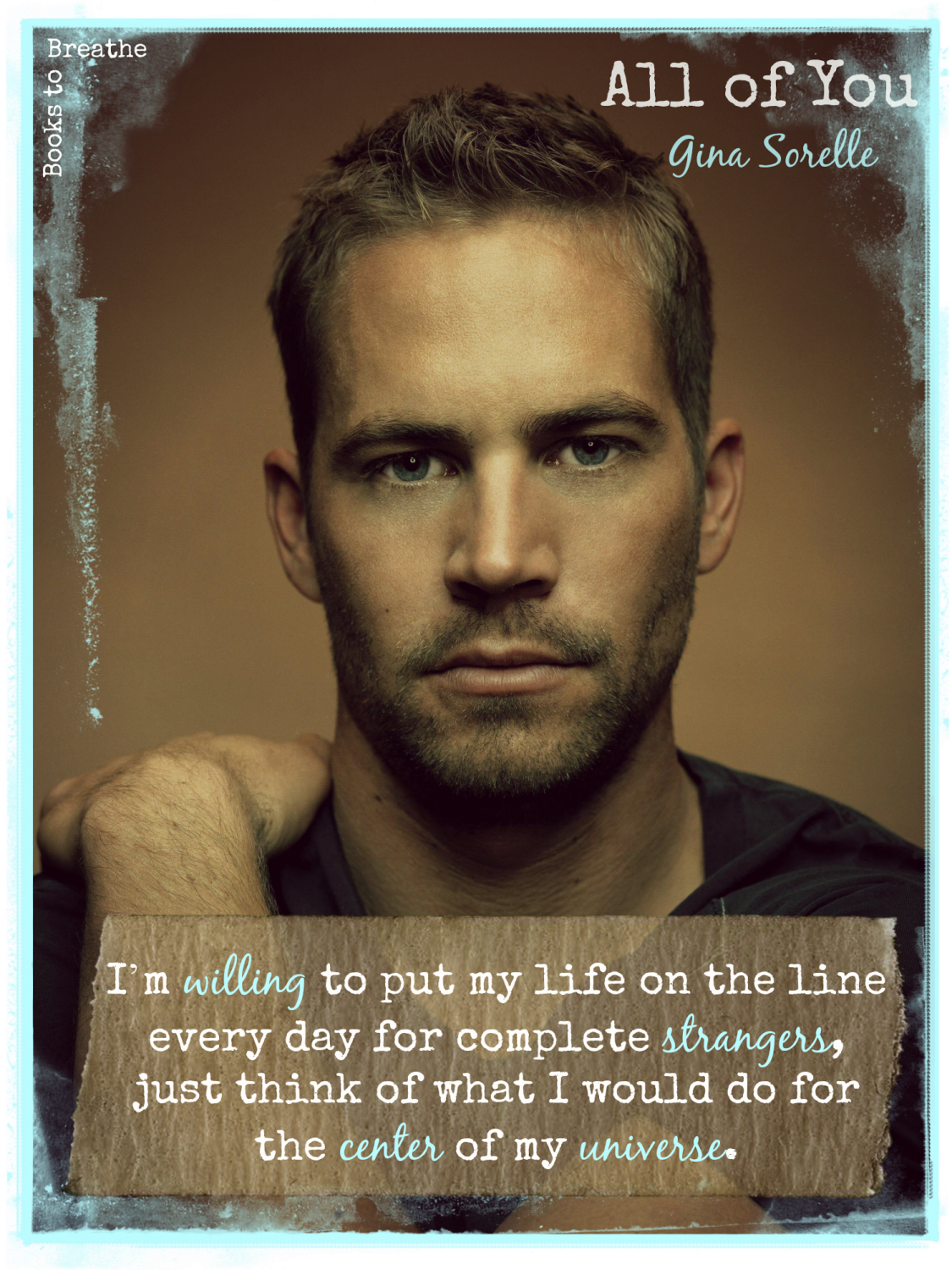 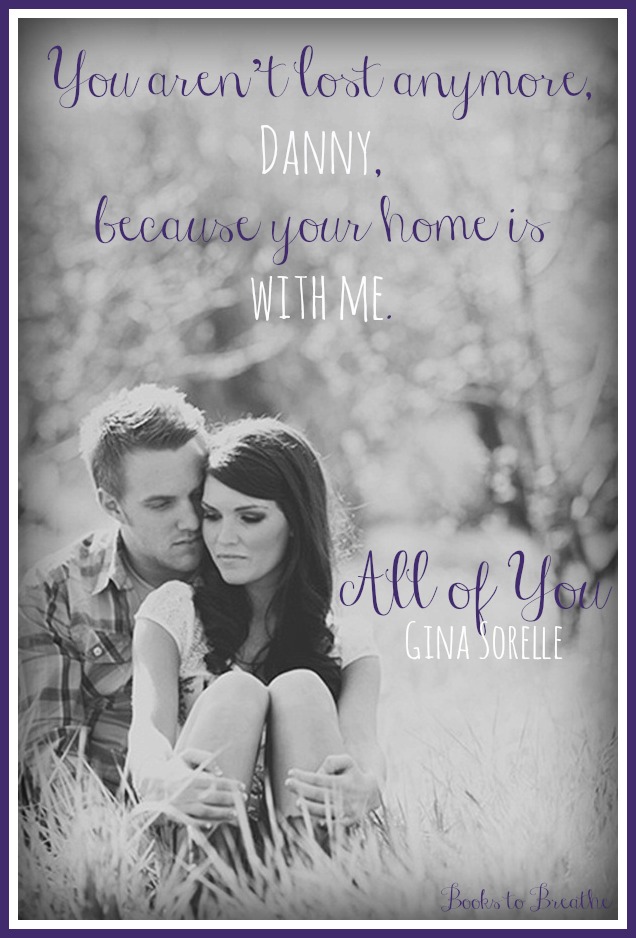 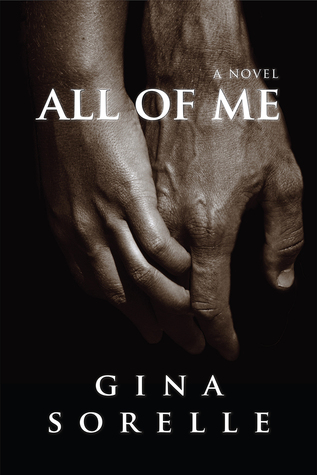 Stella Ciaramitaro spent the last year battling a disease that tried to take her life…and take her away from her four crazy, pain-in-the-butt sisters, occasionally suicidal father, and career as an Emergency Room nurse. Stella’s disease wreaked a lot of havoc, leaving her with visible and invisible scars, but she’s hanging in there. Doing just fine, actually. Or she was until HE showed up. Nathan Drazek is a mess and he knows it. A childhood full of mental and physical abuse, four tours in Afghanistan, and ten years policing one of the toughest beats in East Cleveland have left him aloof and nearly incapable of interpersonal relationships. But that’s okay, because Nathan isn’t interested in anything more than just getting by. Or he wasn’t until SHE showed up. From the moment Nathan nearly arrests Stella, sparks fly, limits are tested, and boundaries are shattered. A tenuous, tender friendship quickly evolves into something powerfully passionate they cannot wish away or control. As they grow closer, new issues arise and old hurts resurface, threatening to destroy their fragile new beginning. With everything at stake, Nathan and Stella must ultimately decide which runs deeper: their scars or their love.

I like nice guys…I always have and I always will. I married one and now I write about them. 🙂

I enjoy writing about real people struggling with real issues: heroes and heroines who complement, uplift, and unconditionally love each other. My stories are heavy on emotions and I aim to make you laugh and cry!

When I’m not torturing my stoic, sexy heroes with strong, witty heroines, I enjoy reading, drinking way too much coffee, trying to be the best wife and mom I can be, and procrastinating (especially when it comes to cleaning the house). I am also a part-time student, a lover of history, and hopelessly addicted to Lifetime movies. 🙂

I really hope you enjoy reading “All of Me” as much as I did writing it.