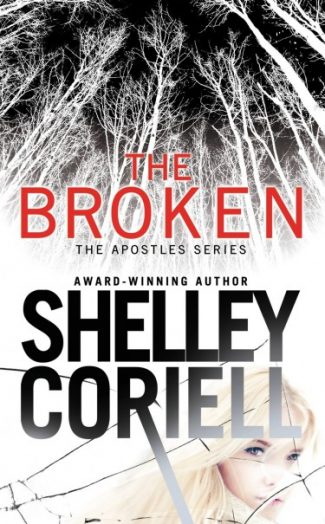 He took her life, but left her alive.

Three years ago, reporter Kate Johnson was the first victim—and only survivor—of the Broadcast Butcher. Scarred both physically and psychologically by the brutal serial killer, Kate lives life on the run, knowing that one day, he will find her and finish what he started.

In the pursuit of justice, you sometimes have to step outside the law.

Agent Hayden Reed spends his life chasing monsters. The only way to stay sane is to detach, but the second the Broadcast Butcher case crosses his desk, Hayden knows this is the case that might just cost him his soul. To catch this vicious murderer before he strikes again, Hayden must find Kate and earn her trust. For it's her darkest secrets that hold the key to stopping this madman once and for all . . . 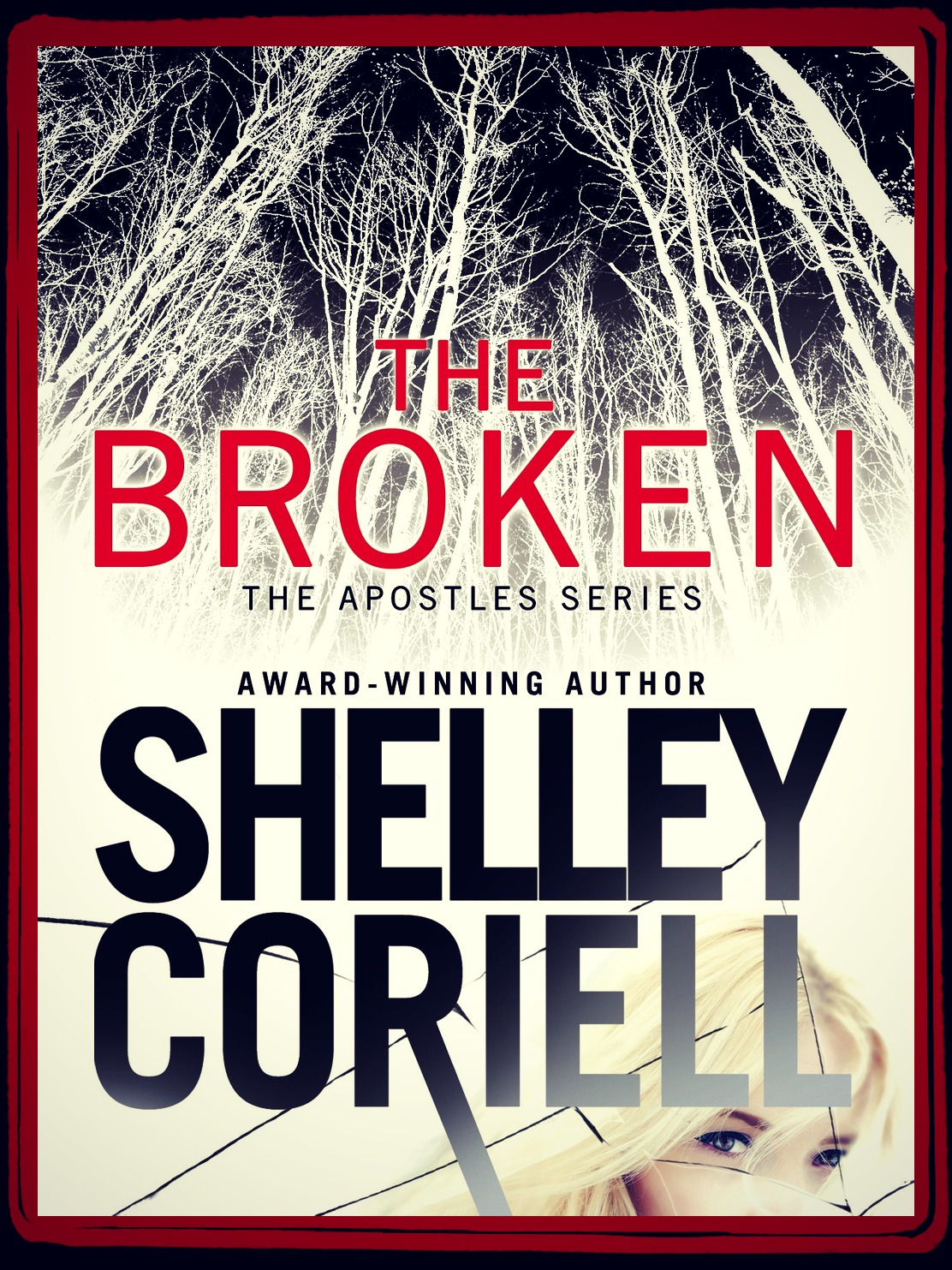 “And disrupt his life even more than I already have?” Smokey Joe had dropped into bed right after dinner, emotionally and physically exhausted. He didn’t even ask for a rain check on their nightly domino game. “If you have any ounce of compassion behind that man-of-steel persona, you will not drag him into this any more than he is.”

He stood motionless for the longest time, and she pictured the gears in his brain whirring and clicking as he weighed the facts and analyzed their options. “You care about him.” There was his non-question thing again. It drove her nuts, and so did the fact he didn’t know what he was talking about.

“This is just a job,” she insisted.

“Something to pay the bills.” She straightened the dominoes on the table and made a note to tell Smokey’s caseworker that he liked his nightly game. “So what happens with Smokey?”

“I’ll call social services and get them out here first thing in the morning.”

She shook her head. “They’ll put him in a temporary group home. He doesn’t do well in institutional settings. He flooded the last one he was in, and it wasn’t an accident. He needs one-on-one attention, someone to be with him, but not to micromanage his days.” Someone like her. But her time with Smokey was over. For now she’d resigned to go with Agent Reed to the Denver field office. She pictured that upstairs window. Unless she got a chance to run.

“And you’ll make sure he ends up in a place where he’s not surrounded by buildings and cars and noise. He needs room to breathe.” Smokey had spent two years in a hole in the ground in a North Vietnamese prison camp and had an insatiable need for fresh air and wide open spaces.

“I’ll find a place with plenty of space.” She opened her mouth, but he held up a hand. “I’ll take care of everything.”

And she believed him, because Special Agent Hayden Reed was the kind of man who’d take care of Smokey and the rest of the free world.

He finally circled his hand around her wrist and turned it so the lock was faceup. “Give me his caseworker’s number, and I’ll make arrangements for tomorrow.”

He inserted the key and turned, the cuff clicking open.

“No, I’m working here.” The cuff slipped off, but his fingers remained circled about her wrist. “I have plenty to keep me busy.”

She hopped to her feet. “But—”

“Would you prefer I set up a team of deputies from the sheriff’s department to stand guard?”

She tried to shrug off his hand, but his fingers tightened, a golden manacle that was stronger than tempered steel. Agent Efficient was enough. “Fine. Work here. If you get tired, there are pillows and blankets in the hall closet.” When he finally let go, she took off up the stairs to her loft. Footsteps sounded behind her, and she spun and glared at him. “Is this really necessary?”

He answered with a pair of raised brows. She stood in the doorway with her arms crossed as he searched under her bed, in her closet, and through her drawers. He tugged at the tiny glass window at the V of the loft.

She let loose an exasperated sigh. “You’re being ridiculous. The Butcher can’t get through that window.”

“I’m not worried about someone trying to get in.” Damn him. And damn those eyes. “I promise, Katrina, if you make any attempt to leave this place, I’ll cuff you to the bed.”

She wanted to swipe off the unbearably confident look on his face, but it was his world, his way. He wasn’t giving up control. He was Mr. Unflappable.

Oh yeah? She’d seen that flash in his eyes when she’d taken off her shirt in the kitchen. He was Super Agent, but he was also a man.

Kate uncrossed her arms and slipped off her overshirt. A half smile slipping onto her lips, she tossed her shirt to the ground and sunk onto the quilt covering her bed. She slid her fingers along her thighs and up her torso. Finally, she raised her hands to the brass headboard. “I’d love for you to cuff me to this bed.” She licked her lips. “Pleeeease.”

Agent Reed’s entire upper body tensed. She saw it in his shoulders, in his jaw, and in his hand as he slid his palm along his tie as if to straighten the brilliant splashes of yellow and orange scattered across the length of silk. His gaze slid from her bare feet and up her legs. An unexpected tingle coursed through her midsection as he lingered on her breasts before sliding to her wrists. A soft breath caught in his throat, and she didn’t need to be a mind reader to know he wasn’t thinking about the Butcher.

With her hands still in the bound position, she waggled her fingers at him.

He blinked and took a step back. Then he spun on his shiny Italian lace-ups and practically raced down the stairs.

Mission accomplished. She’d just shaken the unshakable Hayden Reed, and if she wasn’t so damned furious at him, she’d laugh.

“It’s a broken system, a broken word, Agent Reed, shattered and ugly and full of evil.”

As this was not a typical genre I gravitate towards, it took me a minute to gather my bearings. Let me tell you… I am so glad I took the chance! For fans of the show Criminal Minds, of which I am a super fan, it was just like reading an episode. I found myself furiously flipping the pages trying to solve the crime. One thing you’ll have to learn with this story though, is that it’s a process. I can promise you will never guess the culprit, as I was literally clueless until the very last page! But aren’t the best written stories that way? Why would you want to read a book and be able to predict what will happen? Trust me when I say there is no chance of that occurring here!

From the beginning until the end, I thoroughly enjoyed the push and pull between the two main characters. Their chemistry, while palpable, was not on the forefront which for once, was appreciated. This was more about the story and less about the love, and the story line flowed effortlessly. The Broken was unique in the fact that it bounced between a few POV’s, which while you might think was confusing, wasn’t at all. The majority of the book was our two protagonists, but we also got to have a glimpse into a few side characters as well as the killer.

It was definitely an exhilarating ride and one I wasn’t ready to depart, but fear not. While this story ended, there will be another in the series with two new characters! I cannot wait!

Shelley also is hosting a Book Birthday Bash giveaway of signed books from her favorite thriller/romantic suspense authors. The contest runs through May 11 and is open to US/Canada. Fans can enter here: Book Birthday Bash & Book Giveaway.

Shelley is hosting a live Spreecast chat on April 29 at 7 PM EST to celebrate the launch of the book. We’d love for you to join Shelley as she talks about THE BROKEN! 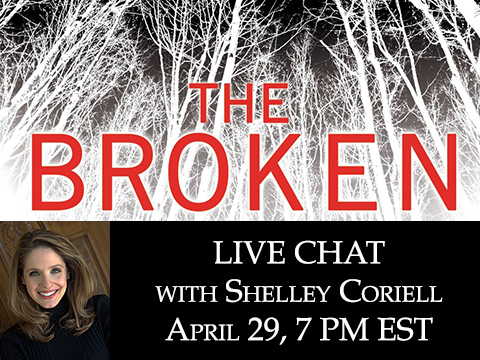 Shelley Coriell is an award-winning author of romantic suspense and novels for teens. Her debut YA, Welcome, Caller, This Is Chloe, was a 2012 Indie Next Pick and Publishers Weekly praised her for her “sparkling wit and great skill in creating complex characters with memorable personalities.” A six-time Romance Writers of America Golden Heart Finalist, Shelley’s new romantic thriller series, The Apostles, will debut in April, 2014 from Grand Central Forever. Shelley lives in Arizona with her family and the world’s neediest rescue weimaraner.