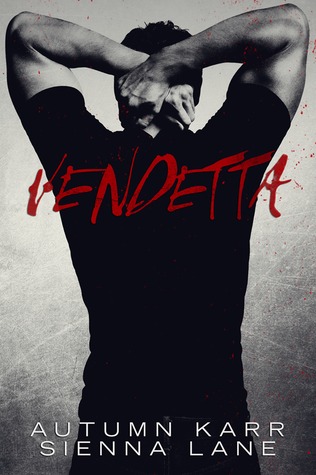 I have lied and cheated and stolen. I've decided between life or death, like it was my due. None of it matters, not anymore. These are not my sins.

I see her raise her hands, the dark metal she's clutching reflecting the moonlight. Her finger trembles as she cocks the gun pointed at me. Her eyes are cold, determined, but I know.

My name is Devon Andre and I confess my sin. I am not a good man because this is the woman I love.

She pulls the trigger.

I stiffen the moment he walks through the door, his eyes pinning me as soon as he locks it shut. He’s carrying a bag of food in his hands, and places it on the table along with his car keys as he makes his way over to where I’m sitting on the chair. He smells faintly of cigar, mixed with his spicy cologne. Even with all the mixed emotions I’m feeling right now, the anger and the pain, I still want him. I’ll always want him.

“I brought something you will definitely like this time,” he says in greeting, flashing me a grin. His mood seems lighter than before he left, which makes me even madder because there he is, grinning playfully while I’m hours away from being taken away.

He pulls out his phone, then quickly checks the screen and shuts it off, putting it back in his pocket. I’ve never seen him bring a phone in here before. A plan starts to form in my head. If only I could get my hands on that phone, everything would be so much easier. I could call someone to let them know where I am, to come and get me while I’m still here.

“I’ll eat later.” I stand up from the bed and take a step closer to him. I place both of my hands flat on his hard chest, and give him a sultry look. “I have something else I want right now,” I say, looking pointedly down his body.

His green eyes narrow to slits, turning heavy-lidded. “Is that right?” he asks, already pulling his shirt off with both hands, sliding it over his head and revealing his sculpted abs and toned chest. Fuck, one glance at his body is all it takes.

My eyes linger on the indentation of his hips, that sexy V I love to run my tongue across. I lick my bottom lip, anticipation and lust taking over my senses. He undoes the button on his jeans, but then stops there. I lift my head up, giving him a curious look.

“I want to see you,” is all he says, his eyes never leaving mine. Sinking my teeth into my bottom lip, I lift off my sweater, pulling it gently so it doesn’t tangle in my hair. I pull off my jeans slowly, sitting back on the bed to pull them off my ankles. I stand up before him in my bra and panties, letting him look his fill. I don’t feel an ounce of shyness—instead, his blatant perusal makes me feel powerful. His lustful gaze and the tightness of his jeans let me know he likes what he sees, and spurs me to reach back and undo my bra. I throw it onto the floor, and grin at Devon’s hungry gaze zooming in on my bare breasts. 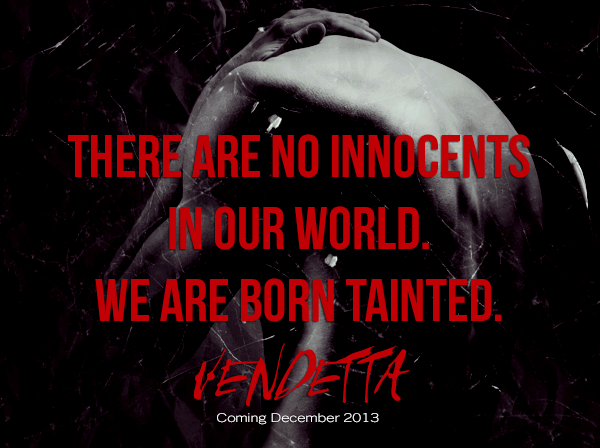 There are no innocents in our world. We are born tainted.

From the very first word, the very first page, I was drawn into this mindfuckery of a story. I stumbled upon the blurb a few months ago on Goodreads, and have been anticipating it ever since. There is ALWAYS a story behind the story, and I couldn’t wait to find out what Vendetta’s was.

I want that more than anything, but sometimes we don’t get what we want.

I should know. I’ve wanted him all my life, and he was someone else’s.

Vendetta definitely kept my blood pumping, keeping me alive from fear, anticipation, and dread. Would they, won’t they, what in the HELL was really going on? This book centers around two principal families; the Andre’s and the Moore’s. What you will find out quickly on, is they are both the largest mob families in Boston. They rule the city with an iron fist and have been bitter enemies for years. Devon Andre lost his family in a brutal manner at a young age, and has since been raised in the family business by his Uncle Frank. Devon has always believed that the Moore’s were behind the death of his father, mother, and younger brother, and on the night our story begins, he finally receives proof. Low and behold, Leighton Moore is caught in the crossfire of this discovery, and Devon takes here. Then our rollercoaster begins.

“You are smart and beautiful and strong, and the most amazing woman I have ever met, and I fucking hate you for it because it still doesn’t chance who you are. I wanted you ever since I knew how to want a woman. You are the worst thing that’s ever happened to me.”

I wasn’t sure WHAT the story was between Devon and Leighton, I just knew there WAS one. Their chemistry jumped off the page, begging for release. Having the advantage of being a dual POV book, we were able to experience the internal struggle each character went through. Devon wanted revenge, anyway he has to get it. That was his first, middle, and end goal, and should anything get in his way, they’d be damned, Leighton included.

He lifts his head from the hollow of my beck, searching my eyes with his as we both reach that climax, our breaths mingling, our bodies speaking without words.

I felt as if the end came too quickly and I would have loved a teensie bit more. I know beauty is in the unknown, but I grew to love these characters hardcore. That is the true sign of a good book though, isn’t it? Leaves you wanting more. So for that, I say BRAVO! Sometimes when you feel as if you have all the information, life spins you on your head, sending you on one hell of a trip. Is the power of love stronger than the need for hate?

I’ve hated her far longer than I’ve loved her. I’ve hated myself for wanting her, then I’ve hated us both for loving her. It seems everything about her is just…hate. 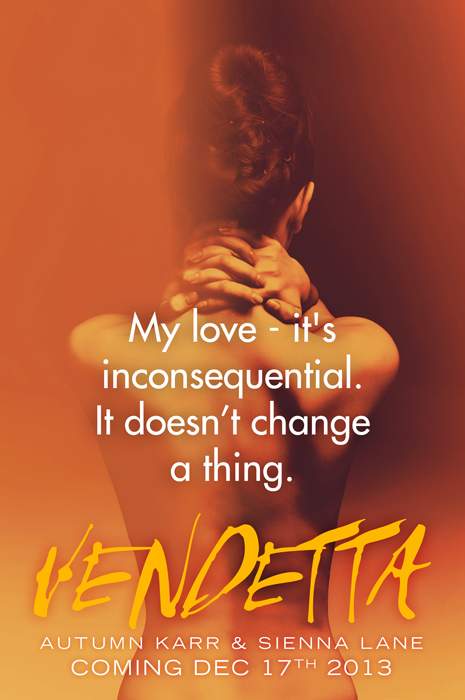 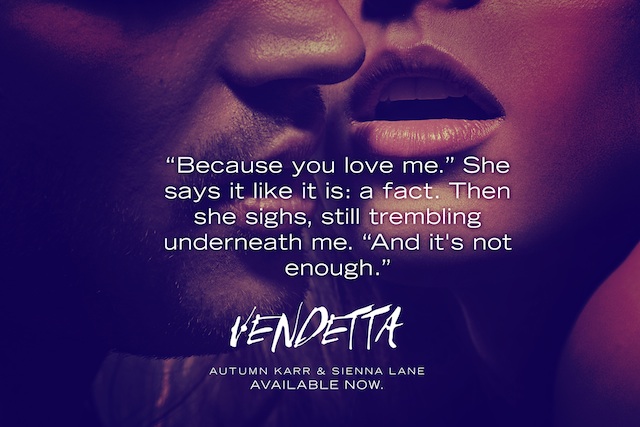 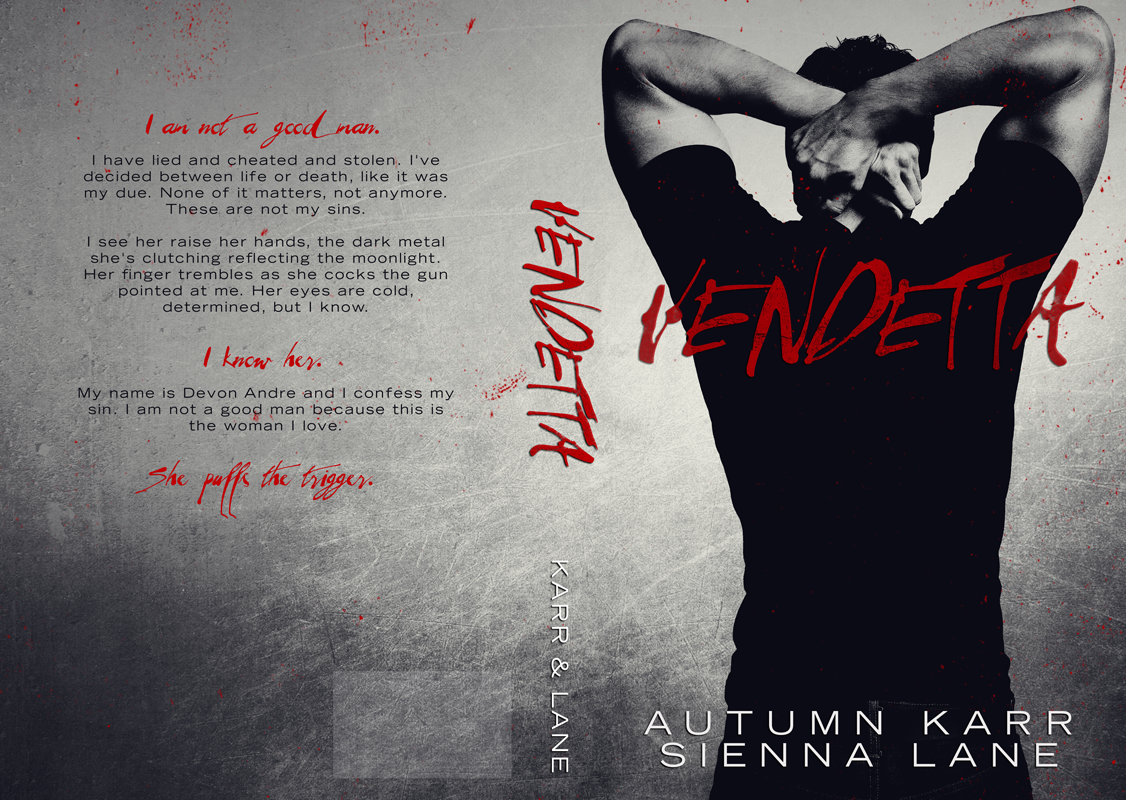 Sienna Lane and Autumn Karr are two friends with a joint love of reading, writing, candy, and Disney heroes (and Disney songs, of course.)

When they aren’t scheming against fictional characters, or talking about their favourite books, you can find them ogling tattooed models and trying to figure out how to get them to do a cover shoot for their next book.

Together they wrote VENDETTA, releasing this December, and hopefully many more books to come.They love to hear from readers, so don’t hesitate to contact them through their Facebook page, 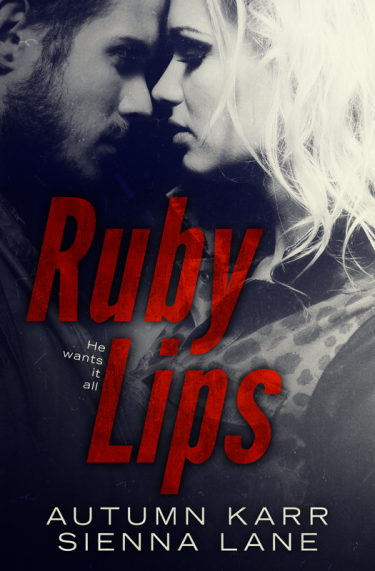