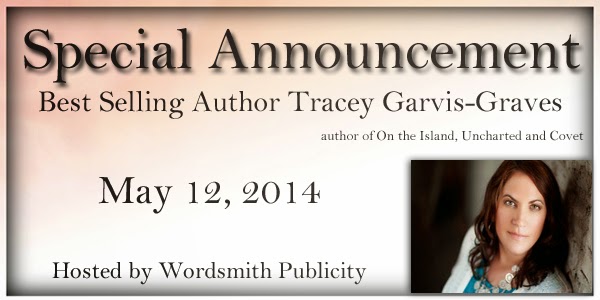 I am thrilled to announce that best selling author Tracey Garvis-Graves will be releasing an Adult Romantic Suspense novel this year! Please be sure to watch the gorgeous trailer for Every Time I Think of You, read the excerpt, and don’t forget to add it to your reading list!

Title: Every Time I Think of You

Thirty-year-old Daisy DiStefano has two people she holds dear: the grandmother who raised her, and her three-year-old son, Elliott. But when Daisy’s grandmother is killed in a seemingly random act of violence, Daisy must take steps to protect herself and her child.

Despite a thriving career in San Francisco, thirty-six-year-old Brooks McClain has returned home to spend what little time his mother has left before she succumbs to the deadly disease that is ravaging her. The seasoned investigative reporter has taken a position with the local newspaper and been on the job less than twenty-four hours when he’s summoned to cover the death of Pauline Thorpe.

Brooks is all business, but the more time he spends with Daisy DiStefano, the more invested he becomes; there’s something about a single mother, a defenseless child, and an unsolved crime that has stirred Brooks’s protective instincts like nothing ever has before.

And when the unthinkable happens, Brooks will do whatever it takes to clear the name of the woman he’s fallen for and the child he’ll protect at any cost.

Romantic and suspenseful, Every Time I Think of You shows how far two people will go to fight for the ones they love, and the life they’ve always imagined.

My watch said 11:00 p.m. Way too late to show up unannounced, but I knocked on Daisy’s door anyway, picturing her tip-toeing quietly to look through the peephole. It took a full minute because I’d undoubtedly roused her from a sound sleep. But then she opened the door far enough for me to cross the threshold and locked it again behind me.

The apartment was dark, save for a small beam of light that spilled into the hallway from her bedroom. As my eyes adjusted I noticed her hair. I’d never seen it down before. It fell way past her shoulders and was slightly messy, like she’d been tossing and turning in her sleep before I arrived. She wore a pair of pajama pants and a tank top with narrow straps, one of which had fallen off her shoulder.

“My mom died,” I said. It felt strange to say the words out loud. My voice sounded flat, unemotional.

“I’m so sorry, Brooks,” she said, but she didn’t say anything else.

I wanted something that would take away the empty, restless feeling inside of me. Something solid and real. She was standing close enough that one step was all I needed to close the gap between us. She must have taken a shower right before she went to bed because when I plunged my hands into all that hair, grabbing fistfuls and pulling her up against me, I felt the dampness and smelled the faint traces of her shampoo.

I moved my hands to the sides of her face and cupped it. She didn’t miss a beat when I pressed my lips to hers. She was probably wondering how I could possibly kiss her at a time like this, but it didn’t stop her from putting her arms around me and kissing me back like it was exactly what she needed, too.

Like the steady turn of a release valve, everything that had been bottled up inside of me escaped slowly through that kiss. I hadn’t realized how rigidly I’d been holding my body until it slackened against hers. How tightly I’d been clenching my jaw until I relaxed it to kiss her. All the tension I’d been feeling disappeared when she opened her mouth and let me in.

It was a long slow kiss, the kind that wasn’t meant to lead to anything else and was all the more powerful because of it. When I’d finally had enough I said, “I don’t know why I came. It’s late. I woke you up.”

“Go back to bed,” I whispered.

She nodded and I opened the door. “Lock this behind me,” I said, and I waited in the hallway until I heard the tumble of the lock clicking into place.

Tracey Garvis-Graves is the author of On the Island and Covet. She lives in a suburb of Des Moines, Iowa with her husband, two children, and hyper dog Chloe. She blogs at www.traceygarvisgraves.com using colorful language and a snarky sense of humor to write about pop culture, silly television shows, and her suburban neighborhood. You can e-mail her at traceygarvisgraves@yahoo.com. She’d love to hear from you.